A few weeks ago, a Team PTQ was scheduled in the Netherlands, and since anyone is allowed to play in Team PTQ’s this season, I figured my team should also try to win some useful plane tickets to Charleston. As Wessel Oomens, Julien Nuijten, and I did well at the Pro Tour in Atlanta last year, we decided not to change our team. Wessel and Julien never played the Heartbeat combo deck in Standard before, and they did not seem to like it that much. Everyone I spoke to told me that Heartbeat was easily the best deck in Team Standard, so I decided to try it for a few days on Magic Online.

I can tell you that this deck is powerful, yet also very difficult. It took about six or seven eight-man tournaments before I began to understand the deck and play it well. It turned out that in every matchup you will have a good chance to win, if you play well… I don’t think there are decks that destroy the Heartbeat deck in this format. Versus all other decks (except for U/R Magnivore) you are the dominant player. Every game is about you trying to combo as soon as possible, while your opponent tries either to disrupt you via countermagic, land destruction, or discard spells, or to kill you before you can go off.

Being the dominant player is a big advantage most of the time. Not only will your opponent have imperfect answers, he might also not be experienced enough in the matchup, which can lead to bad decisions. For example, a BW Ghost Dad player needs to know when he should leave his White and his Black land untapped so he can Mortify your Heartbeat of Spring, and also when he should not do this and simply play a creature instead. These decisions are often pretty tough, and a mistake can easily cost him the game.

After a while I started winning tournaments with this Heartbeat combo deck, and I decided to play it at the team PTQ. In the PTQ I played four matches versus Green/Red/White Zoo, and four matches versus differing W/B variants. My records versus these decks were 3-1 and 3-1, which seems about right, and is also almost as much as one can hope for. I didn’t play any mirror matches, and I didn’t play versus any Blue control decks (which were matchups I was looking to play against, rather than facing multiple Zoos).

With the introduction of Dissension, some things will obviously change to the Standard format. This is my updated Heartbeat list:

Obviously, I will not be able to tell you exactly how the new Standard format will work when Dissension will rotate in. There will probably be a Rakdos-based creature deck, much like all the Orzhov decks that currently dominant. The Firemane Angel deck I made before PT Honolulu turned out to be quite good in the Team format, and will benefit from the new Signets and dual lands in Dissension a lot. The sideboard of this deck will most likely contain Spell Snare, but more on this card later. All other decks that were good before Dissension will still be playable in the new format, and some of them, like Greater Gifts, benefit some from the new dual lands. Finally, an update of the U/G Critical Mass deck can be expected, since Breeding Pool is a better Yavimaya Coast and Voidslime is a better Hinder.

The one new card that I think is really crucial for our Heartbeat deck in the new Standard is Spell Snare. Spell Snare looks like a great card in Constructed in general, as instead of paying three or four mana to say no to a spell, now you will only have to pay one Blue to counter. As Spell Snare only counters spells with converted mana cost of two, it means that it’s a highly situational card. I don’t think it belongs in the maindeck of most Blue decks in this format, because it is gonna be inefficient versus a lot of decks. Countering Dark Confidant on turn 2 is really nice, but if Bob is the only two-mana card that you care about in your opponent’s deck, than Spell Snare is not quite good enough. 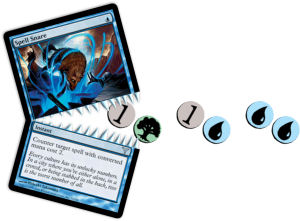 If you take a look at the decklist above, you will notice that there are quite a few two-mana spells present: there are four Sakura-Tribe Elder, four Muddle the Mixture, four Remand, and there is one Rampant Growth and one Boomerang. For a Blue-based deck, there are two ways to beat a Heartbeat player. The first is to make sure that they fail to get enough lands into play to be able to combo, and the second one is to win every important counter battle. Spell Snare is very useful in both of these scenarios, for the low cost of one mana. Before Dissension came out, the U/W/R Firemane deck had trouble beating Heartbeat as it was only running four real counters most of the time (four Hinder; Mana Leak is not really a counterspell versus a deck that tries to generate 23 mana). So when the Heartbeat player eventually had enough lands out, he could go for the kill, while only countering the Hinders. Since the Heartbeat deck had eight real counterspells (four Muddle the Mixture and four Remand) this was usually not too difficult. 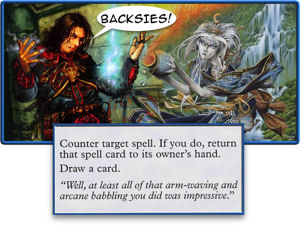 Remand:
Most players fail to get maximum use out of Remand. Most of the time they will try to counter a Hinder with Remand, and after this resolves the opponent just replays his original Hinder, countering your spell after all. In counter-battles, Remanding your own spell is almost always the correct play. Suppose you have a lot of mana in your mana pool, and you just put a lethal Maga on the stack. Your opponent has just two cards in his hand (let’s say these are two Hinder), while your hand is Muddle the Mixture and Remand. Can you win now?

If you Remand his Hinder, he will replay it, and you will not win. However, if you Remand the spell your opponent tries to Hinder, which will either be the Muddle or the Maga, then Remand becomes a hard counter all the sudden (while you also draw a card). When the Hinder gets countered on resolution, you can play your Muddle (or Maga) in your hand again, and win this game.

Spell Snare will increase the number of counterspells in U/W/R control from four to eight, and I think this is quite important in the matchup. Boarding in your own copies of Spell Snare does not solve this problem, since his counterspells now cost one and three mana. Because of Spell Snare, the matchup of Heartbeat versus Blue control decks will not be as good as it used to be.

Also, to fight countermagic (in decks with a lot of counterspells), Gigadrowse was used in the same way as Mana Short was used a few years back. Since Spell Snare is so efficient, I do not think the Gigadrowse plan is powerful enough now. In order to prevent your opponent from casting Spell Snare you will need to tap all of his sources of Blue mana, and this is usually not realistic (there are only seven Islands in your deck, and the opponent can easily counter one Gigadrowse copy most of the time, to end up with one Island untapped in the end).

A way to fight the counter wars versus Blue decks is to add more real counterspells to your sideboard. Voidslime is probably the best card in this situation, the mana cost is no problem for this deck, and it is a lot more versatile than Hinder. Still, you are fighting with three mana counters versus one-mana counters, and I am unsure if this is the way to go. Adding one Demonfire to the sideboard can also be useful. I think you can always play in such a way that Demonfire is the last card in your hand when you are afraid of it getting countered. The problem with Demonfire is that there is no way to tutor for it, while you can just transmute Drift of Phantasms to get an Invoke the Firemind.

Yet another new card to battle counterspells is Determined, one half of the split card Bound / Determined. This has a lot of potential, and is a must-counter spell for your opponent (rather like Orim’s Chant). The fact that is costs two mana is not very helpful (remember Spell Snare), yet it is still a card that I would advise to try.

The matchups versus the popular beatdown decks will not change a lot. Bottled Cloister is a very good and very necessary sideboard card versus all W/B decks. Not only do you draw two cards a turn, you will also make yourself immune to Okiba-Gang Shinobi, Ravenous Rats, Hypnotic Specter, Castigate, Shrieking Grotesque, and (to a point) Cranial Extraction. If your Cloister gets destroyed at some point, you are dead for sure… luckily, they did not print any White or Black artifact removal in Dissension. The only card that your opponent can use is Terashi’s Grasp, and this card is still not really popular in most sideboards.

If new Rakdos decks show up, then these are most likely similar to the Orzhov-decks, except that they have burn spells instead of Mortify. Again, Bottled Cloisters will be great in this matchup, given that they have no way to remove one. If Smash ends up being a popular sideboard card, which will probably happen in a while, then the Bottled Cloisters should be replaced by something else. Also, Vinelasher Kudzu is quite good versus White/Black, and since the Rakdos deck does not have Mortify but Char, the Kudzu is just as good, or even better, versus Red/Black. Depending on the creature/discard ratio in these Rakdos deck, it is quite possible that the Cloisters are unnecessary, and that four copies of Savage Twister will solve all your problems.

The updated Heartbeat deck is not very different from the old Heartbeat deck. Only a few cards have been added to the sideboard. As most other decks will either remain the same, or are very similar to other existing decks, I think that Heartbeat will still be a great deck in the new Standard format.

If you think about playing this combo deck, please put in some mirror match testing, as this comes down to skill a lot more than you would think. Spell Snare is obviously an amazing card in the mirror match. It stops all the spells that you care about (Muddle, Remand, Shadow of Doubt), and you don’t need to leave many lands untapped for it. If you find other cards that you think deserve a spot in the deck, the only cards in the current maindeck that can be replaced are Recollect and Rampant Growth. Any other sideboard strategies are possible, of course. Even if you don’t want to play this deck at tournaments, I would still advise you to try it in a testing session at some point, because your opponent at a tournament might be playing Heartbeat and you’d better know how to play against it.

Please post questions and suggestions in the forums, and I will try to help you there.