It’s a little surprising to see the new Emrakul is smaller than the old one; but I sure am glad it costs thirteen instead of fifteen. Besides, thirteen makes more sense on Innistrad anyway. That said, it’s not like you’re paying thirteen mana for Emrakul very often.

But how much are we paying?

Well, let’s start by looking at her when we’re not trying hard. 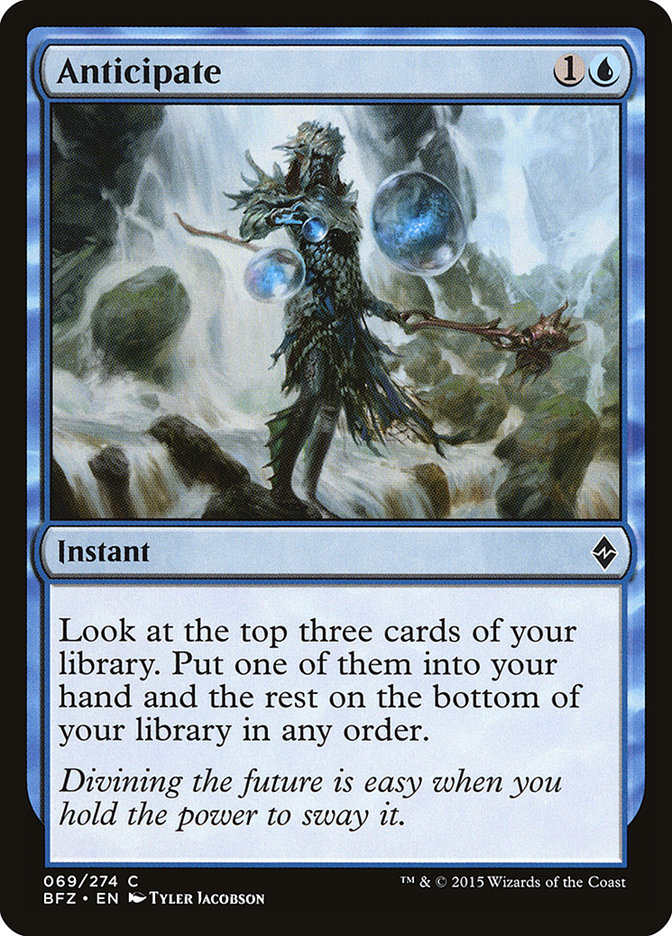 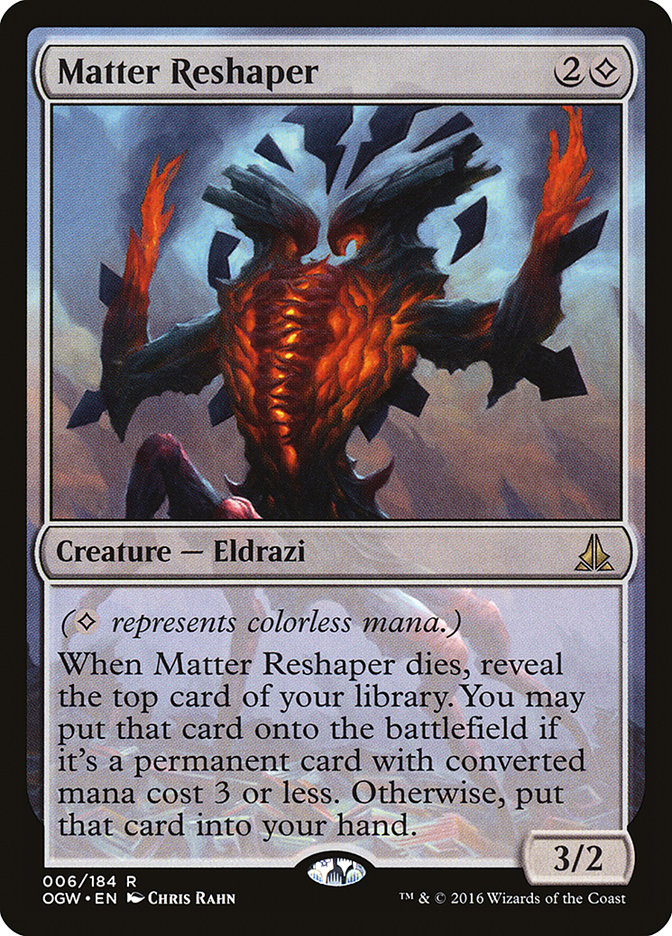 ● Sorcery, Instant – Sorceries and Instants are trivial to get into the graveyard; we just have to make sure we play a mix of both. The biggest place this tends to come up is in Eldrazi Ramp decks that sometimes struggle to find instants worth playing if you don’t want Kozilek’s Return.

● Creature – Creature is also pretty easy, though that does mean we need something that actually dies (so not a curve starting with World Breaker). 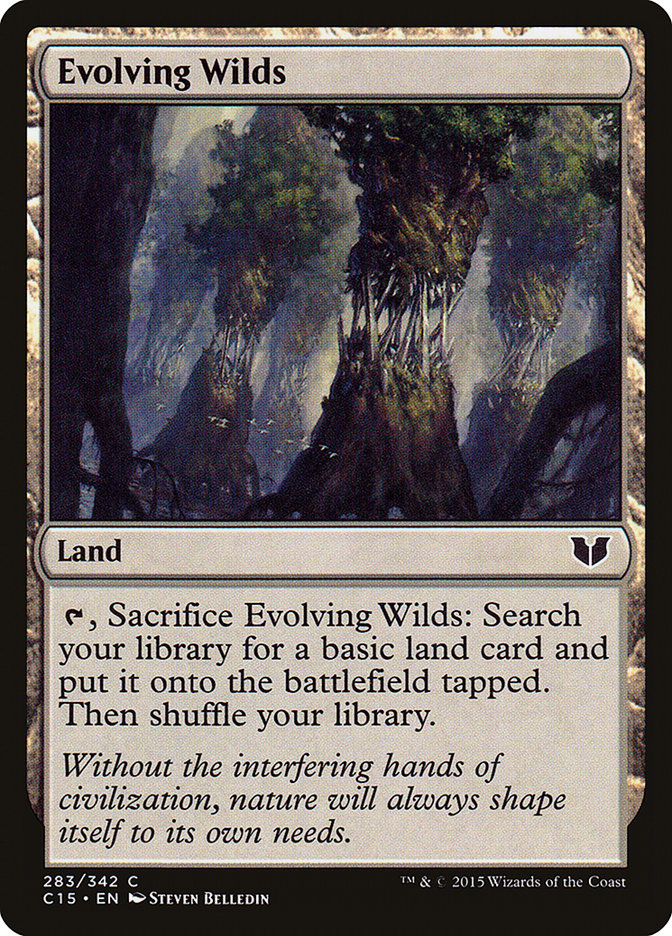 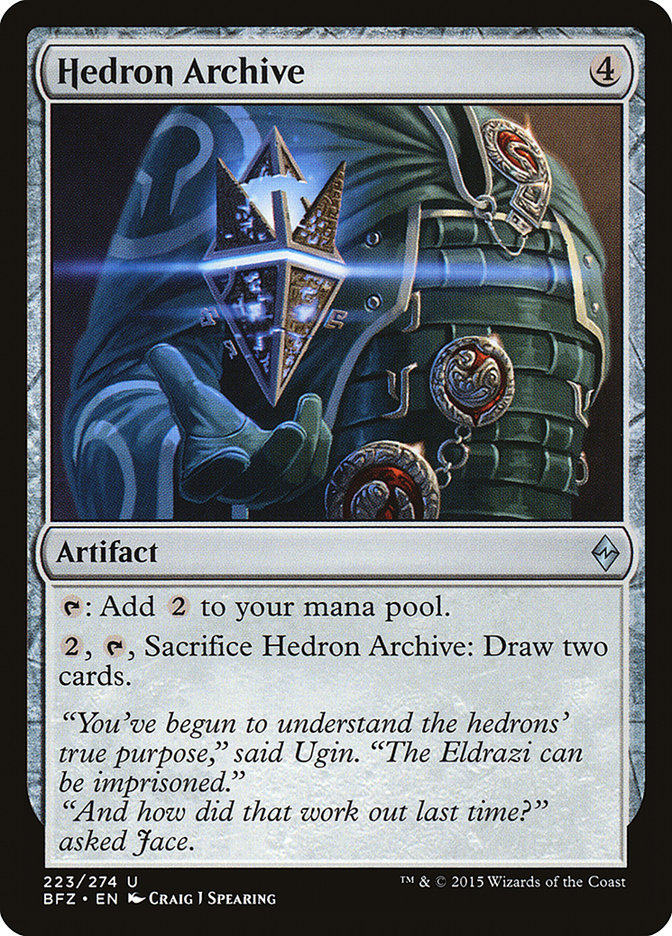 ● Land – The most obvious ways to get land into the graveyard are Evolving Wilds and Sanctum of Ugin, though World Breaker and looting also work.

● Planeswalker – Planeswalkers die plenty and are quite good, but there aren’t all that many options, so this puts some constraints on us.

● Artifact – Hangarback Walker, Hedron Crawler, and Hedron Archive are all passable options, but there aren’t a lot of others. 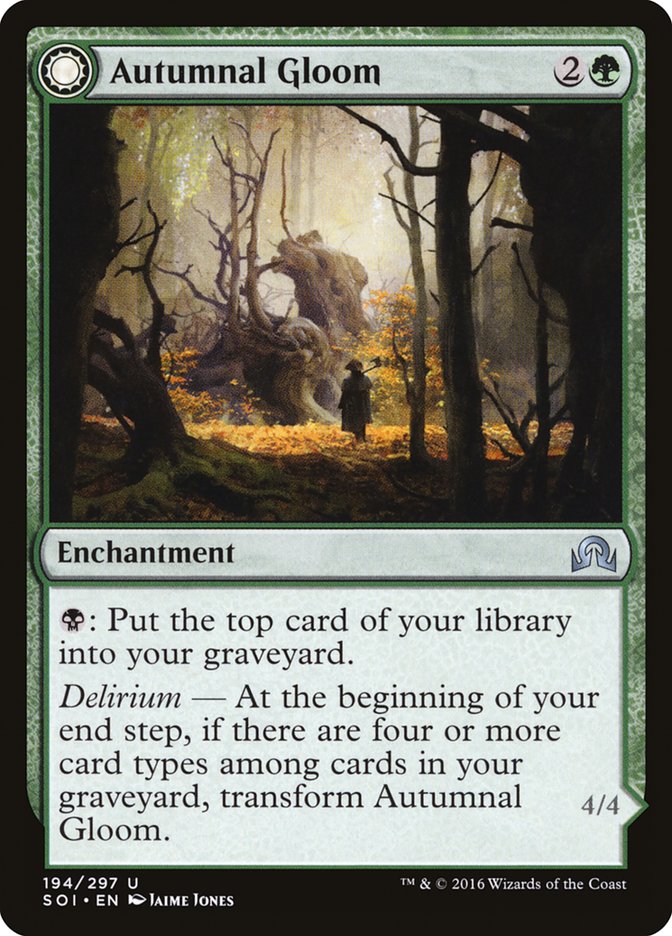 ● Enchantment – Now we’re starting to get into a place that might not be worth trying very hard to get. Dead Weight is an appealing option, naturally going to graveyards. Oath of Nissa (and all of the other Oaths) legend-rule into the graveyard. Silkwrap, Stasis Snare, and Quarantine Field all work when looted away. Stuff like Autumnal Gloom is interesting, as it can mill you to try to reduce Emrakul’s cost, and when flipped to another Gloom, it counts as an extra type. 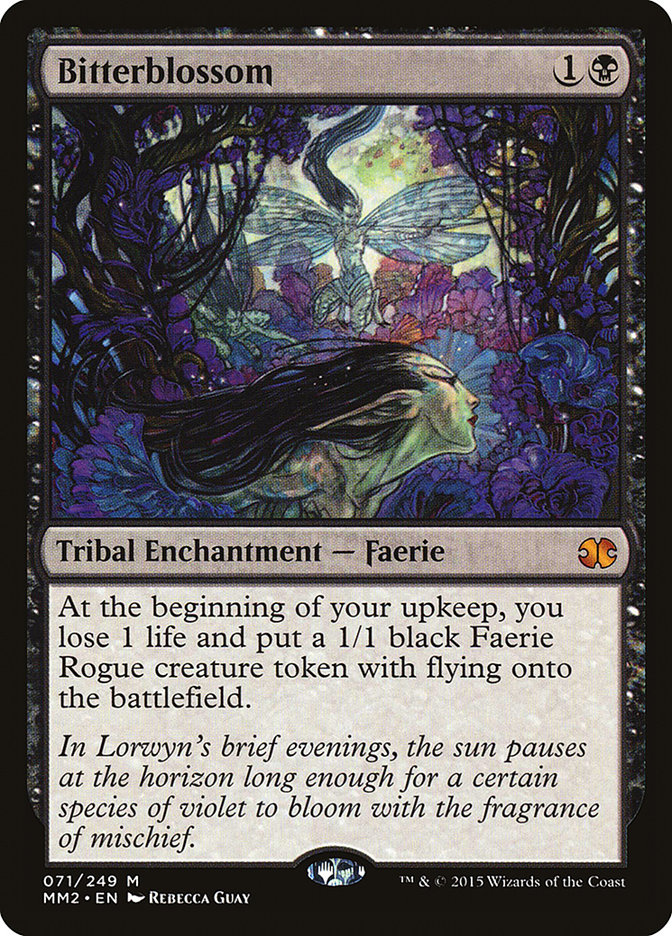 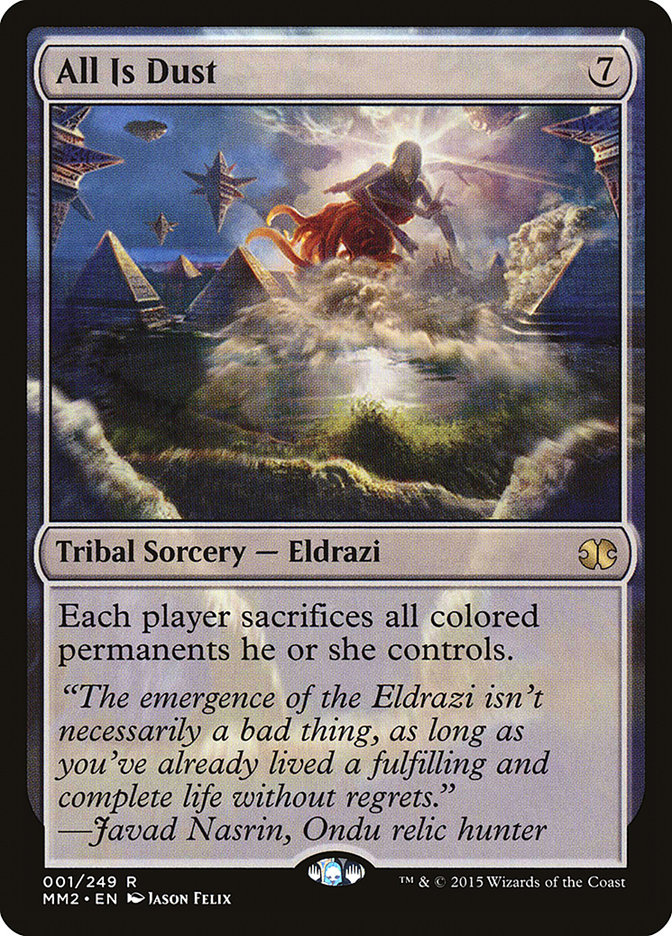 This means Emrakul drops to costing ten quite easily, and eight or even seven with a bit of work. When everything is going well, she can even come down for just six mana in Standard (or five in Modern). Comparing her to Worst Fears (which was also a fringe tournament card), they get an extra turn and you get a 13/13 creature with flying, trample, and protection from instants. 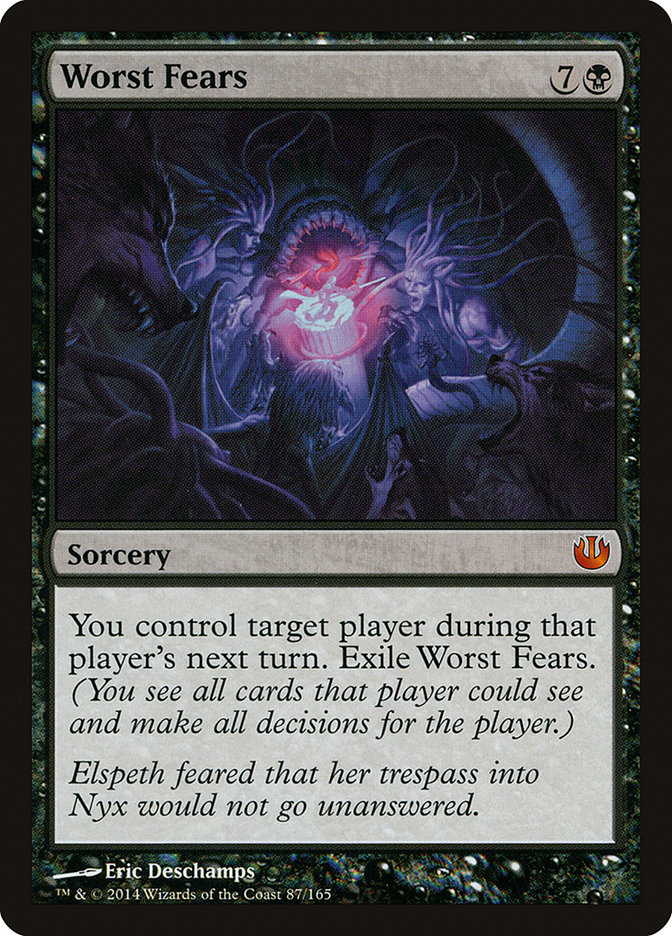 To say that Emrakul costs around as much as Worst Fears is about right, but I’d guess the 13/13 is usually a fair bit better than an extra turn. Don’t get me wrong; it does weaken the extra turn a fair bit when you can’t leave them tapped out for your turn. Then again, their extra turn is worth a lot less when you get to devastate their position first.

Okay, so a 13/13 with a bunch of abilities is better than a turn. But just how good is it?

Well, it starts getting a little weird, evaluating the rate of creatures bigger than 9/9. Once you are killing someone in two hits, the rest of the size has substantially diminishing returns. That said, I would guess that a 13/13 vanilla creature for five mana would be too much. A 13/13 for six is unlikely to ever be printed, but I would guess it’s generally not too good. If it had trample, however, I’d guess it wouldn’t be safe to print anymore. At seven cost, however, it’s probably fine. Give it flying, and it might actually be good at seven.

What about protection from instants?

Okay, that’s kind of a weird ability. It makes sense, though. It would be kind of lame if our opponent could use their kill spell on Emrakul before they take the turn you control. It’s also going to do some interesting things about encouraging people to play a different mix of spells from what they normally would. For instant, Anguished Unmaking can’t hit Emrakul, whereas Ruinous Path can (assuming they don’t have a target, so that you can play it out of their hand). 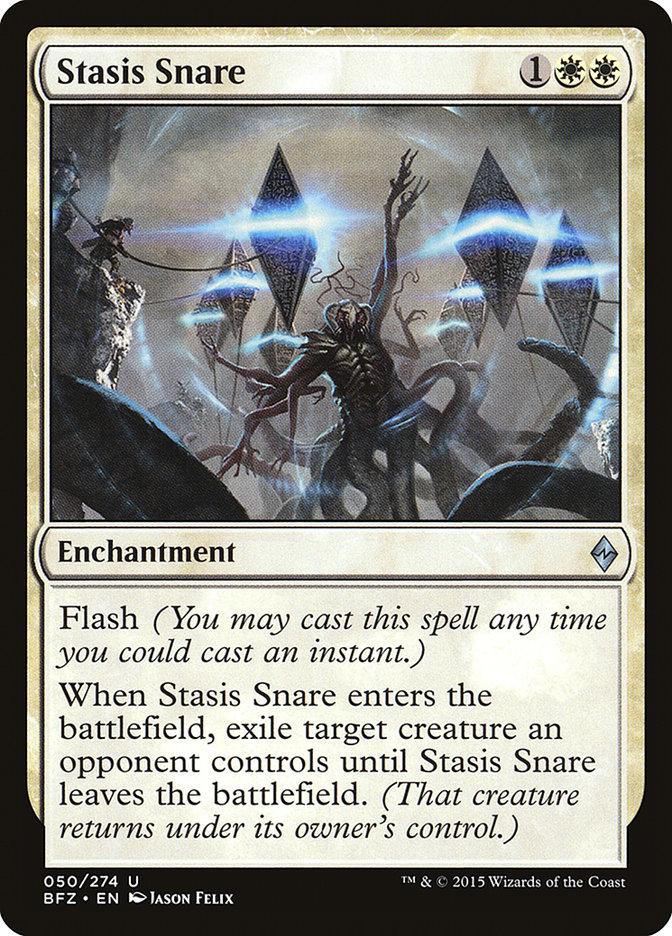 Stasis Snare is a particularly interesting removal spell in the new world. It functions like an instant but can actually hit Emrakul, the Promised End (or Emrakul, the Aeons Torn, depending on the format).

Okay, so Emrakul, the Promised End without the “when cast” trigger wouldn’t really be printed as a seven-drop; but if it were and cost seven, it might actually be pretty good. It’s a little hard to kill and it kills you very quickly.

The thing is, it doesn’t take that much work to make Emrakul only cost seven anyway. And now you get an uncounterable Worst Fears in exchange for giving them an extra card afterwards. That’s a pretty great deal, in general. Worst Fears has a highly volatile value, and the floor is lower than an extra card; however, it’s generally stronger than three extra cards (as evidenced by its eight-mana cost). It might even be worth quite a bit more than that, depending on how slow the format turns out to be.

Of course, Emrakul isn’t always going to cost seven. When she costs nine, she’s still probably quite good, but she isn’t necessarily breaking the game. When she costs ten, she’s starting to look dubious. Of course, this is a bit of a strange case anyway, since she’s usually worth any amount you actually have. Spending the tenth mana doesn’t really matter if you’ve got it. Costing seven instead of ten doesn’t really matter if you die on turn 6.

In order to make Emrakul crazy strong, we want to try to hit all the types. Even in the games where we don’t get her all the way down to six, we want to have as many chances to drop her low, as we can. It’s kind of interesting that Emrakul’s cost is not always clear. For instance, if you play an Epiphany at the Drownyard on turn 6, you might end up adding several types at the same time; when you untap, you can play Emrakul much earlier than anticipated.

Nahiri is already a Modern staple when used to cheat out Emrakul, the Aeons Torn.

While Nahiri’s not quite as effective with Emrakul, the Promised End, we’re still talking about hitting your opponent for thirteen out of nowhere. Using Nahiri’s ultimate to deploy Emrakul doesn’t trigger the “when cast” trigger; however, she does bounce back to your hand and isn’t that expensive to just cast on your next turn.

Nahiri is an extremely versatile planeswalker that really does take great advantage of all of her abilities. Getting to loot away cards actually plays right into the Emrakul plan, since adding an enchantment or artifact or whatever to the graveyard can speed up the hard-cast arrival.

In Modern, we usually only play one Emrakul, the Aeons Torn, since she reshuffles your graveyard whenever you discard her to Nahiri. Since Emrakul, the Promised End has no such ability, we probably want to just play a second copy. Besides, it’s not actually that hard to just cast Eldritchkul. We might even play three or more copies, depending on how easy it is for us to get it down to six or seven mana. 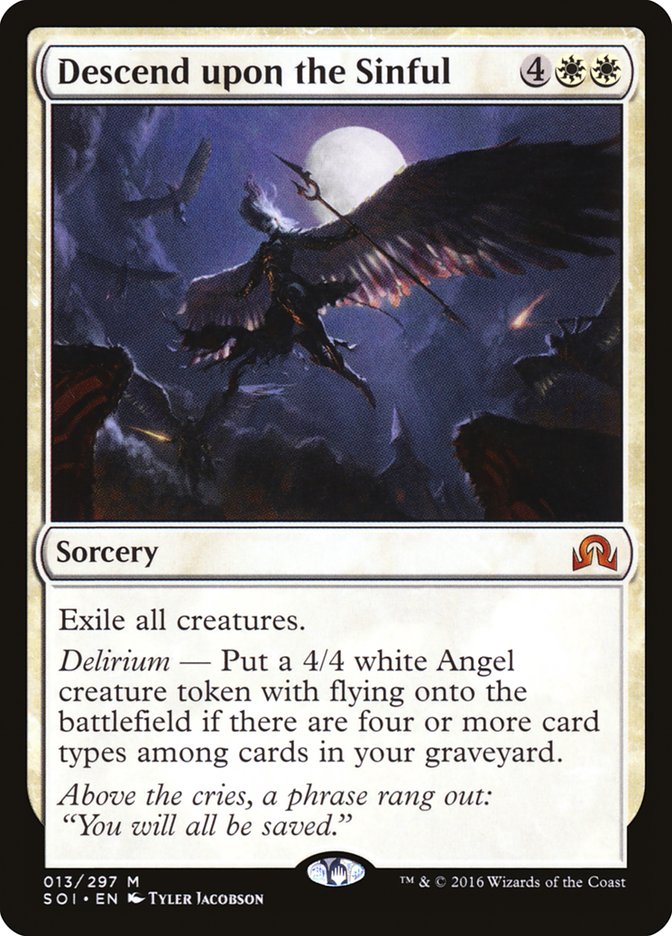 Delirium plays perfectly with Emrakul, since we’re going to want some of basically every type anyway. We do need to be careful about playing too many expensive cards, however.

Hedron Archive is an interesting option for ramping into Chandra, Flamecaller or a big Epiphany at the Drownyard. It’s also more help toward just hard-casting Emrakul, one way or the other. It’s kind of a sweet option that you can use Nahiri to search Hedron Archive up and then sacrifice it, just to get some extra cards. You won’t do it all that often, but sometimes both Emrakuls are gone or you just need to find an answer to something. Of course, you can also search up Jace, Vryn’s Prodigy, which won’t bounce back if you flip it. 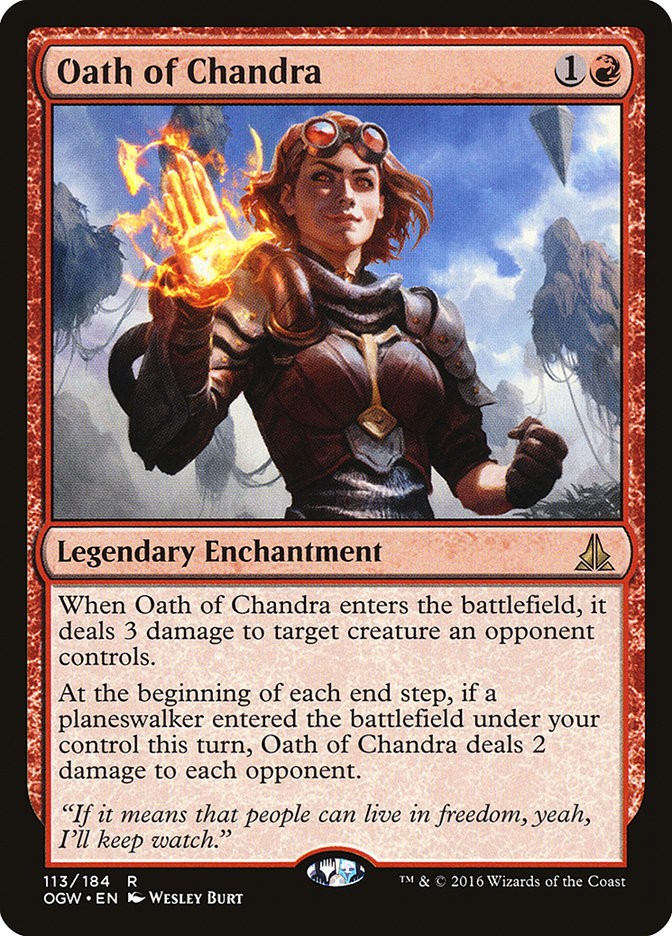 Oath of Chandra is really interesting with the new Emrakul. That the second one adds an enchantment to your graveyard is a nice touch, but we can also just discard it. It’s just a highly underrated card anyway. In fact, maybe we’re supposed to push the whole Oath thing a bit harder.

This is starting to look like a really fun deck. Oath of Jace is particularly sweet at casting Emrakul, as it fills your graveyard so quickly. It’s possible we even want to hybridize this strategy with a madness strategy. We’ve got access to Nahiri, Jace, Oath of Jace, and more.

Another possibility is to move towards a Goblin Dark-Dwellers-centric path. The various Oaths plus planeswalkers don’t work as well in that world, so we’d have to downplay that element. However, we can still use some. For instance:

My favorite part about this deck is the use of Sorin, Grim Nemesis. 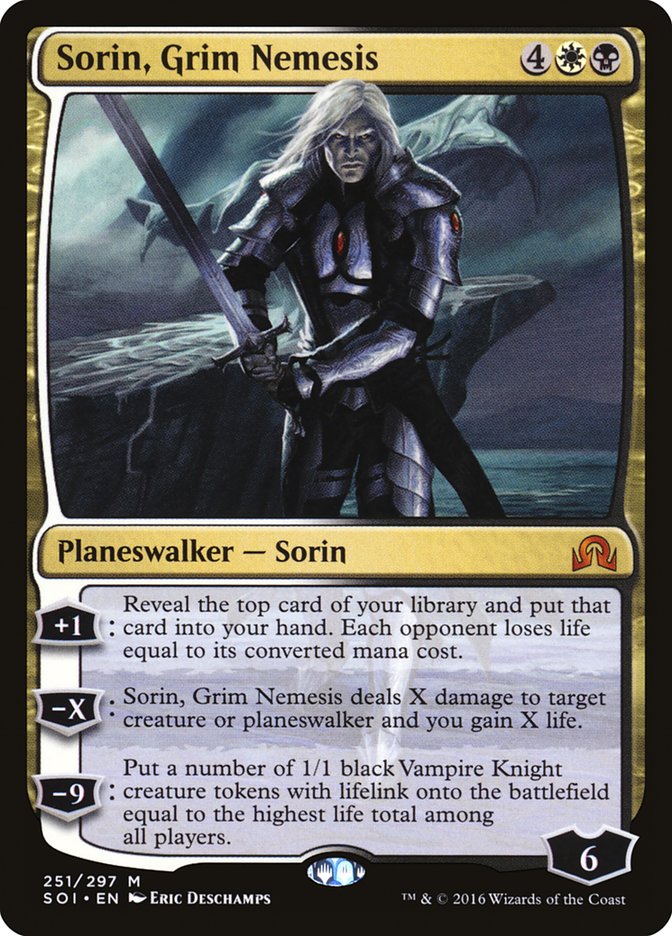 Sorin is a powerful card in its own right, but in a deck with two Emrakuls, we’re going to get some obnoxious free wins when we just blind-flip thirteen damage to the opponent’s face. It may sound like a longshot, but if you haven’t drawn an Emrakul by turn 6, Sorin is typically better than 4% to reveal one. No matter how badly things are going, if you can get seven damage in, you’ve always got chances.

Of course, why leave things up to chance? 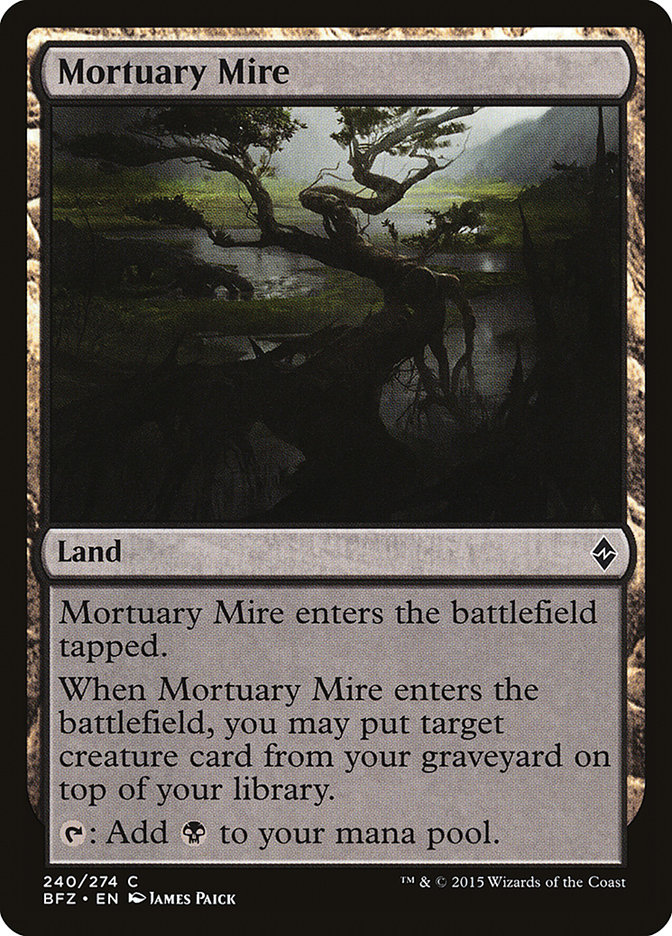 If you discard Emrakul to Nahiri, you can use Mortuary Mire to put her back on top. Now your Sorin does thirteen for sure! It’s hard to play very many Mortuary Mires in this shell, but we could just go two colors. 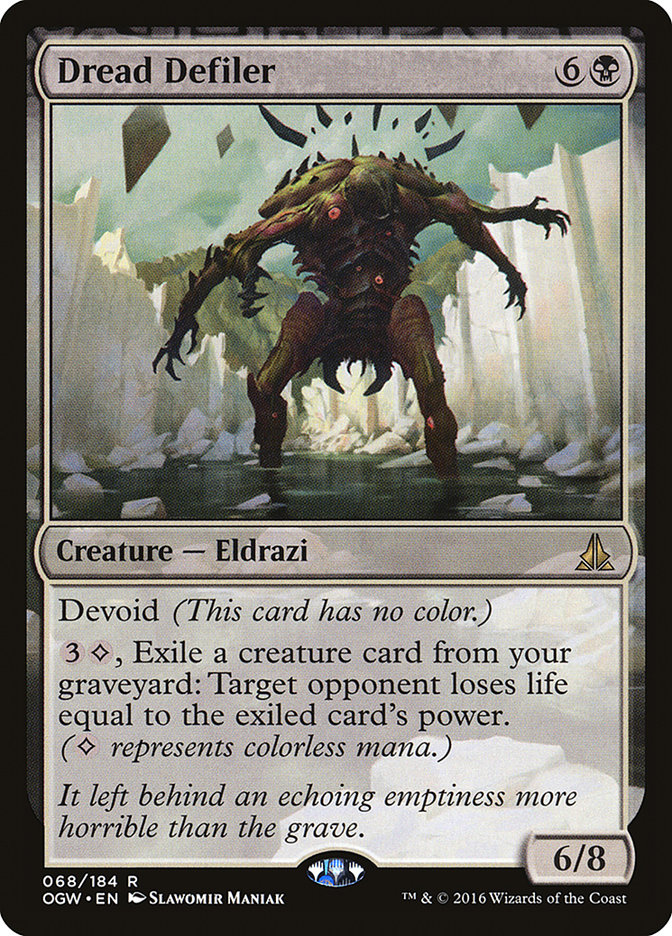 Dread Defiler is sort of another Sorin, but without any ways to discard cards, this list is going to have some serious problems capitalizing on it or Mortuary Mire as much as it could. We could use some black discard card like Call the Bloodline. However, we could add green for self-mill or we could also add red or blue for looting.

Now, we’re starting to get into the space where we might actually start to become more of a combo deck than a ramp deck. This one is going to take a bit more work, but it could become incredibly strong if it receives the right support in Eldritch Moon.

Red is also a very appealing option, as Nahiri is a fine source of looting:

That said, we might also end up closer to a traditional Ramp deck. After all, Traverse the Ulvenwald and Oath of Nissa work well with Emrakul.

We haven’t even touched on the possibility of using a single Emrakul as a mirror-breaker for control matchups, or as a sideboard weapon. It may look like a thirteen-drop, but she’s usually not going to cost more than Ugin if we’re doing it properly.

Whatever route ends up proving more fruitful, I believe time will show…