Again, this is a matchup that I’m scared of, but I can definitely beat it with Death’s Shadow. Part of that odd combination of fear plus confidence is my lack of experience with the matchup.

Attacking the Death’s Shadow deck on a different axis from what they’re used to is a perfect way to gain an edge. While they have might discard, Liliana of the Veil, and some Abrupt Decays, chances are they can’t really beat a hexproof threat. Daybreak Coronet wins races, and they even have Path to Exile to make life even more difficult. Sometimes a pair of Death’s Shadows means Hexproof can’t attack and will eventually be put into The Abyss, but Tarmogoyf will rarely be very threatening.

Things only get worse post-sideboard with Leyline of Sanctity. Since the discard is the main way Death’s Shadow is going to interact with enchantments, shutting that down is huge. The fact that Liliana of the Veil’s -2 does nothing is an added bonus.

Ensnaring Bridge is lights out if it sticks. Death’s Shadow has maindeck answers in the form of Kolaghan’s Command. If Lantern Control could never beat a Shatter, it probably wouldn’t have just won a Grand Prix. The answers to Ensnaring Bridge are few and far between.

Obviously Ancient Grudge makes the post-sideboard games much better, but Lantern Control only has to fight through one or two of them. Welding Jar, Pyxis of Pandemonium, Surgical Extraction, and Spellskite are all fine ways to mitigate Ancient Grudge. With the amount of filtering the Lantern Control deck, finding another copy of Ensnaring Bridge should one be discarded or blown up isn’t a big deal. If Death’s Shadow can’t kill the Lantern Control player immediately upon killing Ensnaring Bridge, Academy Ruins can help put it right back onto the battlefield.

In theory, this should be a good matchup for Death’s Shadow, but I think it’s much closer than that. While they are mostly weak to discard plus a clock, they are often drawing very live. A single Primeval Titan will often do obscene amounts of damage in the mid-game, and with Death’s Shadow often at a low life total, it’s usually enough to end the game. 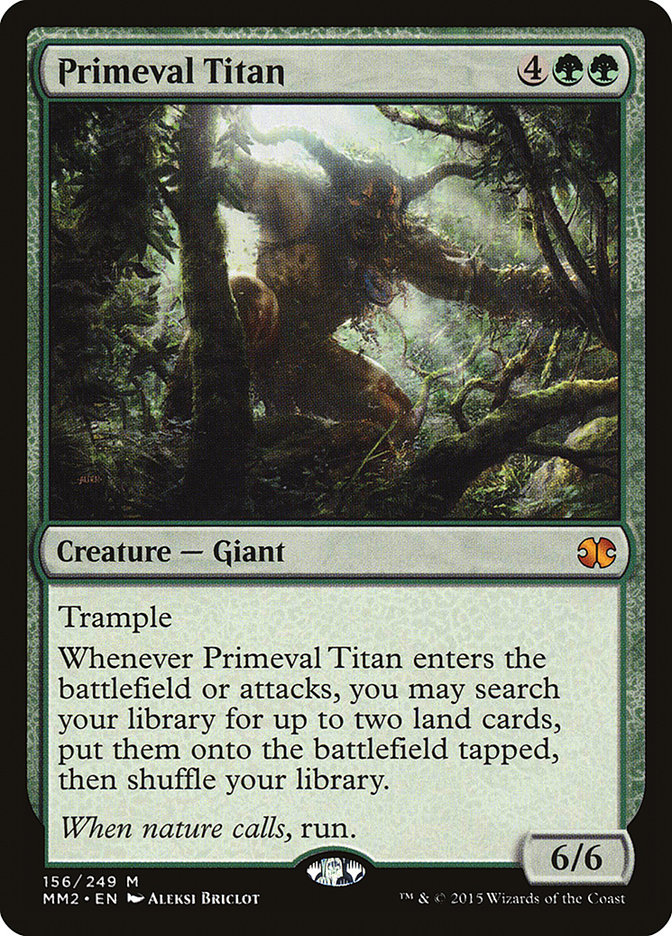 They also have Summoner’s Pact to get extra virtual copies of Primeval Titan, therefore increasing their threat density. Even things like an early Chandra, Torch of Defiance can be difficult to deal with. Simian Spirit Guide can be awkward in games where Death’s Shadow plays a pile of discard spells, but it makes the Valakut deck so much more threatening in general that I think it’s worth it.

Post-sideboard, Chalice of the Void can potentially rain on their parade as well, especially if they don’t expect it and sideboard out their artifact removal.

Bant Eldrazi should be harmless, right?

They’re a pile of overcosted creatures, a few removal spells, and very little in the way of truly threatening cards. Yet this matchup is somehow tough. As it turns out, a fast clock with sticky threats, some disruption, and some removal is a recipe for success.

Fatal Push doesn’t particularly line up well against a pile of three-casting-cost and higher creatures. Tarfire is especially embarrassing against their larger threats. Liliana of the Veil and Kolaghan’s Command are even more embarrassing. Reality Smasher wins races and forces the Death’s Shadow player to be careful with their life total. If Drowner of Hope sticks, it’s often lights out.

The big lesson here is that your deck doesn’t need to be powerful, particularly hateful, or even one of the best decks in the format. All you really need is a way to make the Death’s Shadow deck less efficient as a whole.

Maybe this one is overreacting. It does seem like the combination of Chalice of the Void, some removal for big creatures, making Inquisition of Kozilek relatively weak, and sideboard copies of Leyline of Sanctity and Rest in Peace might be really bad.

Their single weakness is that if you manage to stick a threat and clear the way with discard, they have very few ways of actually answering it. Lightning Helix and Anger of the Gods aren’t going to do much, and if you play around Nahiri, the Harbinger, they might have a rough time.

Still, it’s a tall order to try to beat an early Chalice of the Void or , and if they adapt with more copies of Journey to Nowhere or Blessed Alliance, it might become the nightmare matchup. All it takes are some small tweaks, like making sure the majority of your removal is live against Death’s Shadow.

Grixis Delver is threatening because it’s part Burn deck and part grindy Grixis control deck. While Ancestral Vision and Cryptic Command aren’t cards Death’s Shadow should really be afraid of, the combination of a fast clock plus spot removal is something to be feared. If Death’s Shadow tries to play a longer game, they could get ground out by Snapcaster Mage and Kolaghan’s Command, but they could also get burned out by Snapcaster Mage and Lightning Bolts.

Most decks on this list tend to have an abundance of spot removal for big creatures, but Grixis Delver makes good use of its Lightning Bolts. It also helps that cards like Tasigur, the Golden Fang are mostly immune to Death’s Shadow’s removal, making it difficult for them to compete if the game comes down to attrition. It’s possible for Grixis Delver to stick a delve monster and easily clear the way.

The maindeck Nihil Spellbombs are a nice touch. I’m sure it was an easy choice for an artifact that fuels delirium while also doing something relevant, but Nihil Spellbomb is effectively a hate card for Death’s Shadow. And it’s not as if they actually need the help in the matchup either. Path to Exile, Fatal Push, Liliana of the Veil, Lingering Souls, and discard are basically what Death’s Shadow is trying to sideboard into for the mirror match. Very few of Abzan’s maindeck cards are poor in the matchup, which isn’t the case with most of the decks in Modern. 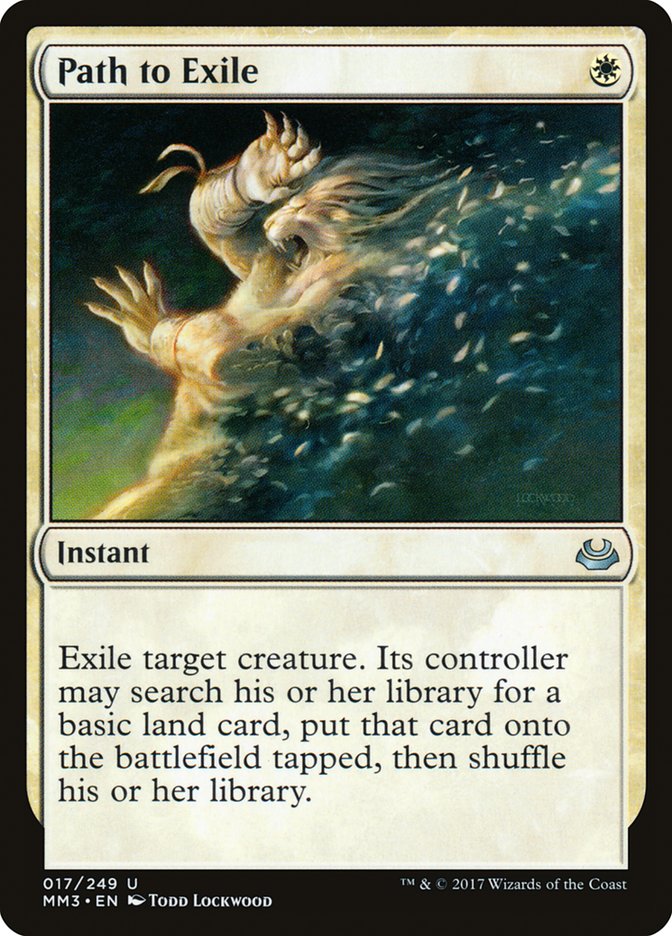 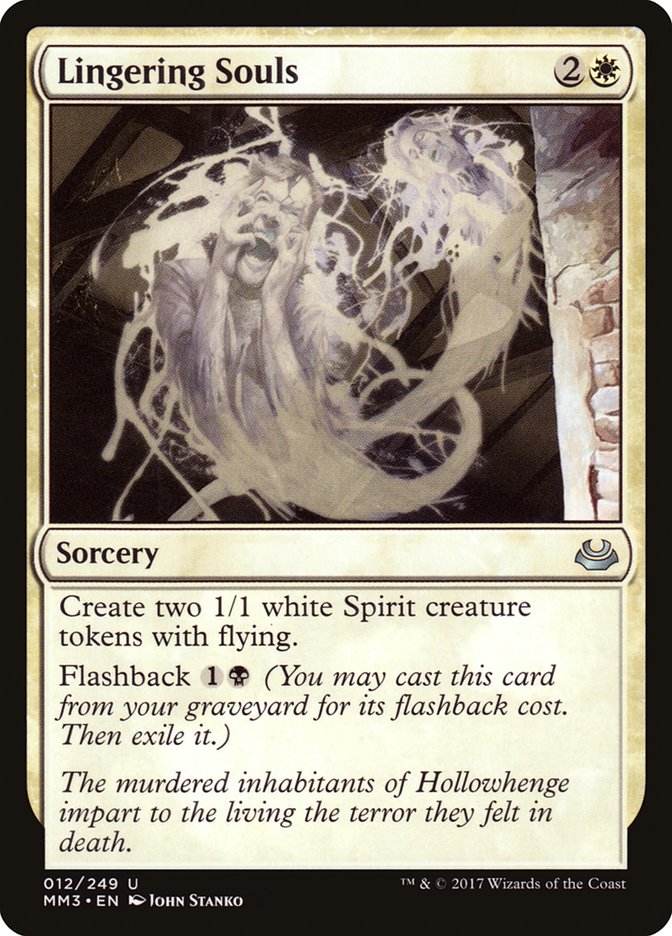 Each of their removal spells can kill a Death’s Shadow or Tarmogoyf, and that’s the issue most decks in Modern have at the moment. They have discard spells to protect their best cards and Lingering Souls to win a potential attrition war.

Abzan basically has it all. So what could possibly be scarier for a Death’s Shadow player than Abzan?

As far as I’m concerned, this is the boogeyman. They do the graveyard thing, which discard doesn’t interact favorably with. Death’s Shadow’s best bet is to get a lucky discard spell to slow down Dredge, stick a threat, and trample over for lethal with Temur Battle Rage or Ghor-Clan Rampager.

Barring that, Dredge will put a bunch of threats onto the battlefield, have ample chump blockers, and eventually finish the game with Conflagrate. Even the sheer threat of Conflagrate is something Death’s Shadow has to be worried about, as they can’t be loose with their life total. Bloodghast is another card that compounds that issue. Dredge is constantly underrated, both because of its linear nature and because people don’t expect the potential reach the deck can provide.

Older Death’s Shadow lists used to run Anger of the Gods, likely for this matchup. The various “go wide” decks are somewhat of a problem for Death’s Shadow, but most of that is because they’re ignoring them at the moment, choosing to use their sideboard slots on something else. You can prey on that weakness.

Which graveyard hate you choose is going to impact this matchup significantly. Grafdigger’s Cage is probably better than Surgical Extraction, especially since you can protect it with discard, but a Surgical Extraction on their first dredger could win you the game on the spot.

Is this a Death’s Shadow article in disguise? Sort of, but I’d like to think it’s an ode to some of the more underappreciated decks in Modern and what they bring to the table. Seeing that most of these decks have a common theme or two, such as their removal being capable of killing a Death’s Shadow or Tarmogoyf, is also valuable.

Modern is in dire need of a shake-up. It will happen, so it’s just a matter of time, not a matter of “if.” The format will adapt to the presence of Death’s Shadow, and it will likely lead to a rise of some of the decks on this list.

The most important thing to do once a new threat has been discovered is to work toward hating it out of the format. That typically involves not playing decks that it preys on and finding decks that aren’t pure hate decks that tend to have good matchups against it while still being competitive against the rest of the field. Can Death’s Shadow react to these potential new threats in turn? Absolutely, but they can’t react to them all at once.

I’ll be playing some version of the Death’s Shadow deck in my next Modern tournament, but Dredge is by far the best deck that very few people are playing. If you’re going to #SCGDFW, I would highly recommend it to anyone.