This is the first Eldritch Moon Spirits deck I expect people to build because it uses the most new cards in the simplest way possible. It’s a straightforward U/W Skies deck that uses Rattlechains and Aether Vial to play a flash game, and it attempts to assemble Drogskol Captain with another Drogskol Captain or Phantasmal Image. Rattlechains, Mausoleum Wanderer, and Selfless Spirit can all protect Drogskol Captain, making it much easier to get two of them on the battlefield. Once that happens, your creatures are all huge and hexproof and winning is pretty easy.

Spell Queller is at its best in this shell, as three-mana creatures with three toughness that need to stay on the battlefield to matter are pretty questionable in Modern, so you want to have a lot of ways to protect it if you’re going to invest. Literally every creature in this deck can help protect your Spell Queller in one way or another.

I do believe you basically have to work this hard if you want Spell Queller to work in Modern, and I think it might be good if you’re willing to work this hard, but I’m not sure that you’re supposed to. I think it’s important to be able to get away from it to explore other directions, as playing such a fragile three-drop can lead to things spiraling out of your control very quickly.

As such, it’s important to understand that the highlight of this tribe for me is Selfless Spirit, followed by Mausoleum Guard, and the primary “new” reason to try to be a tribal deck is Rattlechains, though that’s far from the only “tribal matters” card Spirits has access to.

I suspect that this deck can run into problems against people who are equipped to kill each of their Spirits as they come out, as it has very little real card advantage and each of its creatures are independently weak. There are a few different ways to approach this problem.

First, we could become more aggressive–instead of trying to play a reactive flash game, we can maximize the fact that our cheap Spirits protect our other creatures after they’re already on the battlefield and just try to get the opponent out of position and under pressure. This is the Merfolk approach.

The single biggest reason that Spirits hasn’t been a Modern deck before is that all the one-mana Spirits are terrible. This is why Mausoleum Wanderer is so significant. It’s actually good. The problem with trying to play an aggressive Spirit strategy is that you don’t want to play nothing on turn 1 in an aggressive deck, which is why Aether Vial is so good. With Aether Vial, you can use Merfolk’s strategy of just playing four Aether Vials and four copies of your one good one-drop. The problem is that Spectral Procession is probably the best thing Spirits can do for three mana, but playing Aether Vial is a bit worse when your best three-mana option isn’t a creature.

Judge’s Familiar is worse than Mausoleum Wanderer in a lot of ways in this deck, but it still fits our plan of curving out with fliers that make life difficult for our opponent, so it’s the best we can do. Anafenza, Kin-Tree, Spirit; Drogskol Captain; and Favorable Winds are our lords. They’re not as good as Lord of Atlantis, but all of our creatures have flying, and we get to play Spectral Procession and combo it with Mausoleum Wanderer.

Our opponent can certainly still grind us out, but at least now we won’t have clunky Phantasmal Images clogging up our hand, and we might just put too much pressure on them. Spectral Procession is good against spot removal.

Four Kami of False Hope in the sideboard probably looks pretty weird. I want more one-mana creatures, and this one’s good in some matchups, so I’d like to be able to play it when it’s good, and it’s great against Become Immense decks. 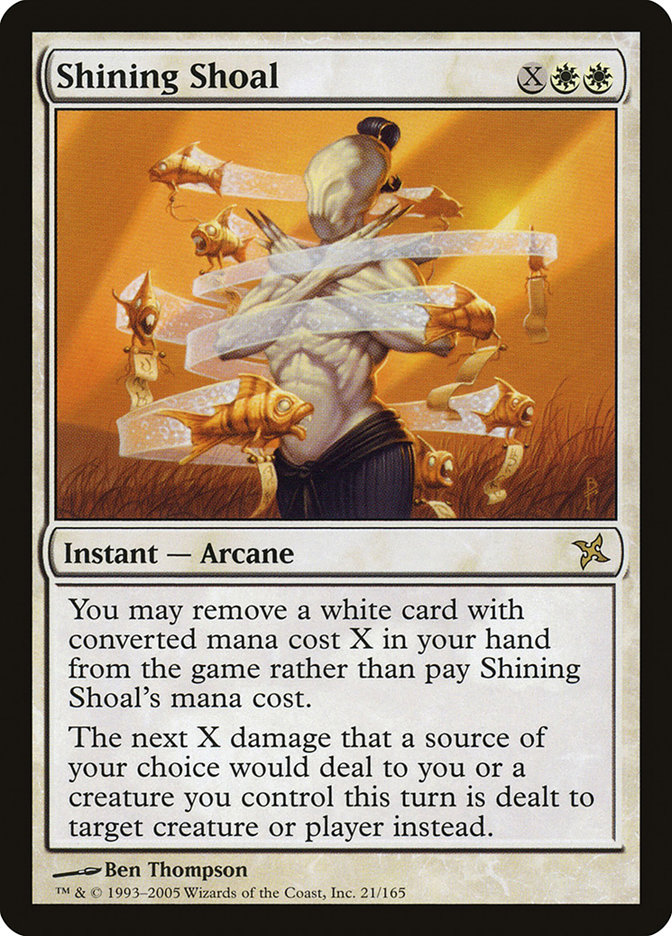 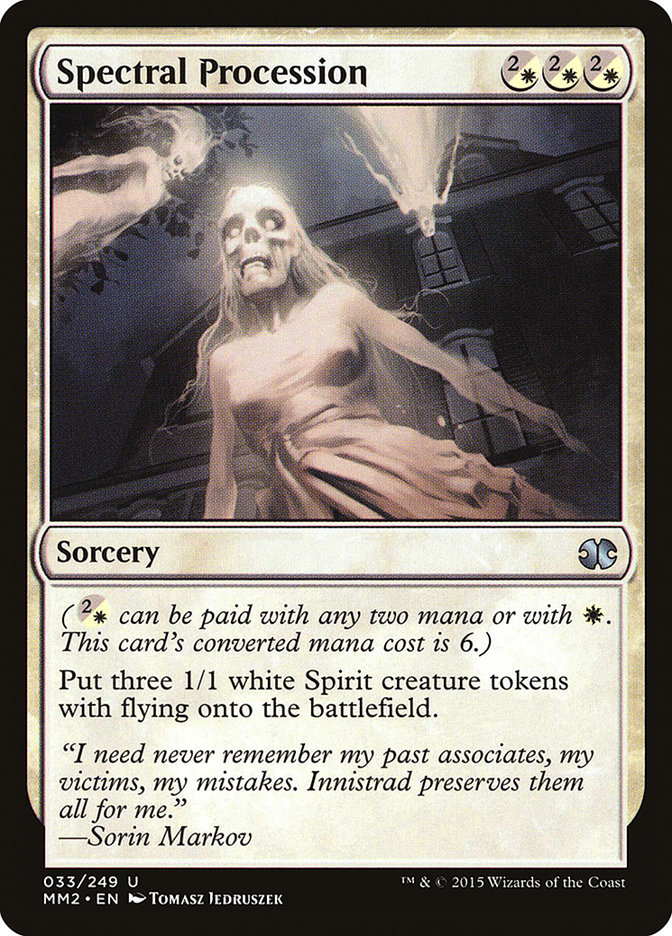 Shining Shoal is a forgotten gem that works really well with Spectral Procession.

Another direction is to play to Tallowisp. This brings us to the G/W Hexproof strategy. Tallowisp is probably the most powerful “Spiritcraft” card in Modern as it can come down and immediately start generating multiple free tutors. 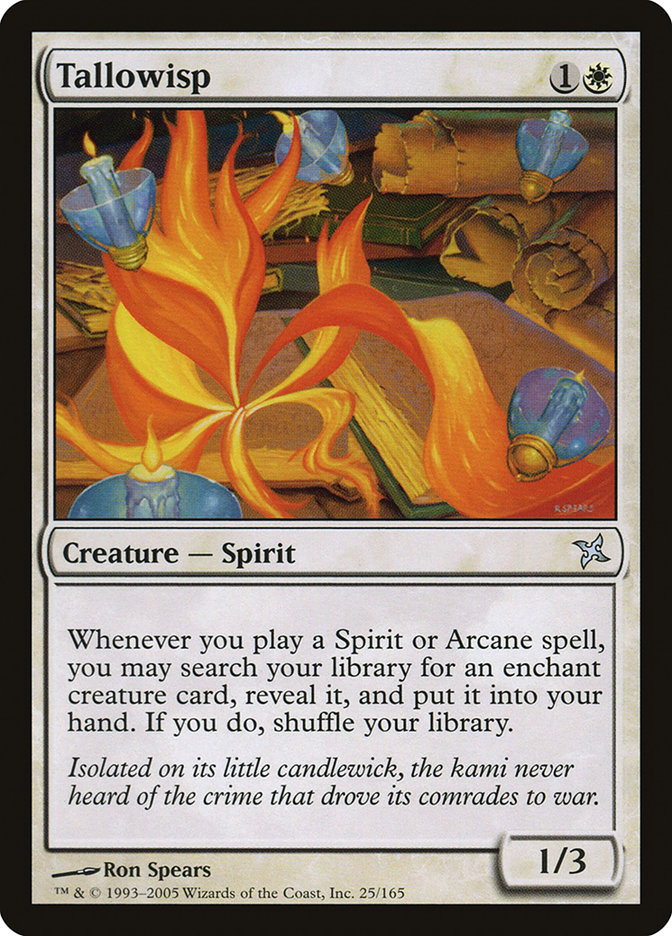 If you want to go really deep with Tallowisp, you can use it to find Arcanum Wings and Eldrazi Conscription and build an Eldrazi, but it’s not a fast process.

There are several different ways to build around Tallowisp. If we want a fast Geist of Saint Traft, we could play Bant:

This is the Hexproof-style deck I alluded to above.

Mausoleum Wanderer and Selfless Spirit both protect Tallowisp, making it far more likely that you can keep it on the battlefield to generate multiple triggers, and Mausoleum Wanderer offers a playable one-mana Spirit, allowing you to cast Noble Hierarch on turn 1 and then cast and trigger a Tallowisp on turn 2. Selfless Spirit is also great at keeping Geist of Saint Traft alive for multiple attacks. 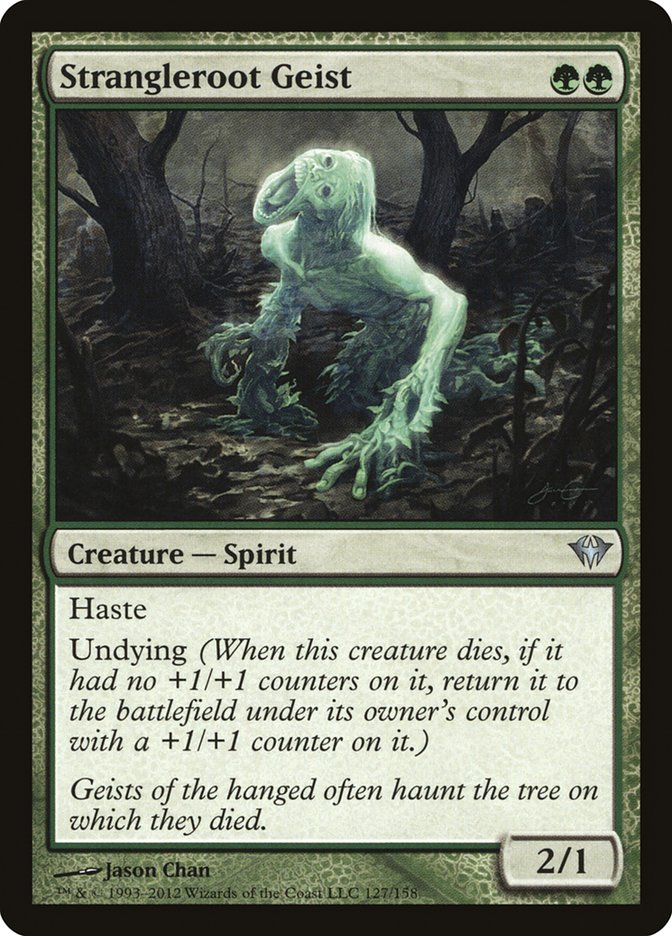 Strangleroot Geist is a Spirit that helps against Edicts and sweepers, and it’s great at wearing Rancor. Aside from a variety of aggressive Auras that can be useful in different situations, the Tallowisp package includes Oppressive Rays and Weight of Conscience to answer opposing creatures.

If we wanted something that could take better advantage of the fact that Tallowisp is generating card advantage to play an attrition strategy, we could play Esper instead of Bant:

This is what I had in mind when I said Spirits could play like Zombies. The attrition might not be quite as robust, but between Tallowisp, Thief of Hope, Lingering Souls, and Moorland Haunt, you’re prepared to play an attrition game.

Here, we pick up discard spells as our additional first turn plays, which help.

Thief of Hope is a great card that previously didn’t have a home, because, again, there weren’t enough good Spirits for it to soulshift back. Not only did Eldritch Moon bring us up to a playable number of cheaper Spirits, but the Spirits can both sacrifice themselves, meaning they almost always end up in your graveyard rather than in exile, where Thief of Hope can find them later. Of course, Thief of Hope can also return Tallowisp to help keep the value going.

Nameless Inversion and Dead Weight are both slightly worse than other removal spells in Modern, but they’re close enough that the price you pay for including them over alternatives shouldn’t be too high, and the upside with Thief of Hope and Tallowisp respectively should easily make up for it. 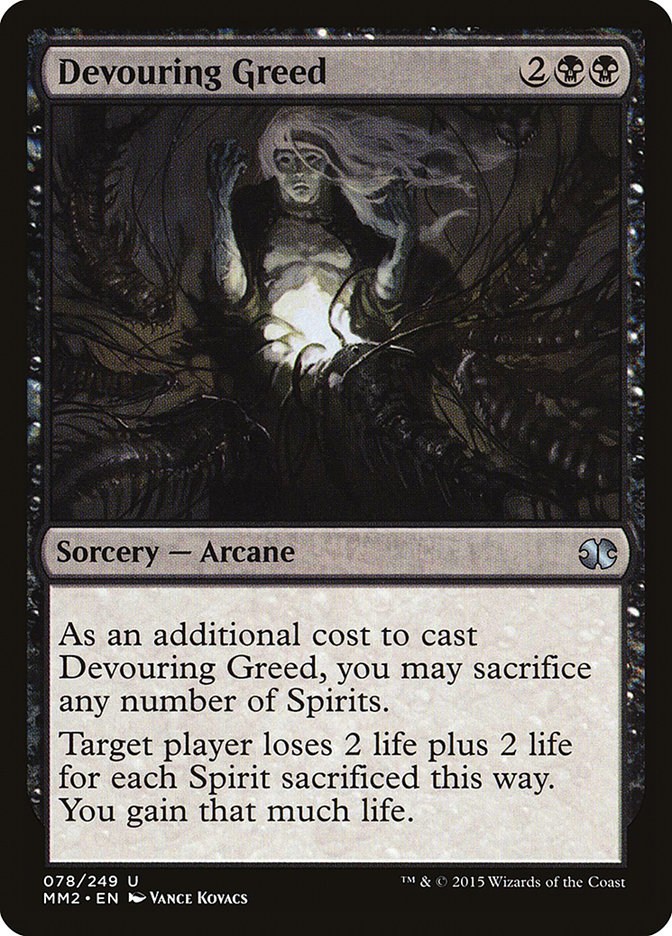 You’ll notice the single Devouring Greed in the sideboard. I’m not sure, but I think this card might just be great. We can work harder to build toward it:

Turn 3: Spectral Procession, attack for six, opponent at twelve. Sacrifice Selfless Spirit on their turn to save your creatures.

Turn 4: Attack for four, opponent at eight, cast Devouring Greed for up to ten.

This isn’t the fastest kill in Modern, but it comes with a bunch of independently disruptive creatures that punish removal in lots of different ways. Devouring Greed adds a “win button” to a deck that can already be hard to keep in check. The opponent can race you, but aside from your abundance of blockers, you have discard and removal, as well as access to a wide range of excellent sideboard cards.

All of these lists are untuned, and I haven’t exhaustively studied the extensive Spirits in Modern (though I do tend to be pretty good at remembering the relevant ones), but I hope this showcases some of the flexibility this fledgling tribe is capable of now that it has more good early plays. If you’re looking to play a new linear deck in Modern and find that a direct port of Standard Spirits doesn’t work, remember that this is a tribe with a lot of options and a lot of potential to shift its strategy to account for points of failure.