Hello everybody, and welcome to another edition of the Magic Show. This week we have a brand-spanking new spoiler from Magic 2010 that’s sure to warm the hearts of kitchen and tournament players alike, as well as live coverage of the Boston $5K Finals and plenty of additional video clips. Let’s go! 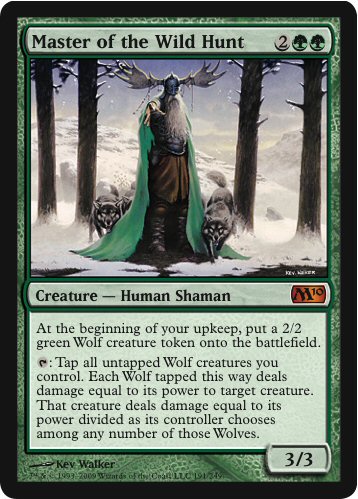 Master of the Hunt

So next month Magic 2010 is going to hit the metagame freight-train style, and holy crap does it look fantastic. We’ve got the incredible dual lands, Ball Lightning, Silence, Siege-Gang Commander, and just look at Lightning Bolt! Oh my God, Lightning Bolt! It’s back! I can’t believe it! The card they said was above the power curve is in fact right on top of it, grinning foolishly. I mean, look at that Flavor Text. Best. Flavor text. Ever. C’mon! Way to go Wizards! I for one can’t believe this gem has returned, and I’m loving every minute of it. Lighting Bolt will be on everyone’s decklists this year, and I’m totally pumped.

Okay, so. My spoiler. Are you ready for this jelly? Feast your eyes on Master of the Wild Hunt:

Master of the Wild Hunt
2GG
Rare
Creature – Human Shaman
At the beginning of your upkeep, put a 2/2 green Wolf creature token onto the battlefield.
T: Tap all untapped Wolves you control. Each Wolf tapped this way deals damage equal to its power to target creature. That creature deals damage equal to its power divided as its controller chooses among any number of those Wolves.
3/3

Oh man, that’s some goodness right there. I don’t know if you realize it, but free dudes are never bad. Now, before we get into it, let me recognize that yes, Creakwood Liege wasn’t quite the Free Call of the Herd Every Turn I wanted him to be. But, Master of the Wild Hunt is superior in a few ways: First, he’s +1/+1 with an easier casting cost. Second, he makes 2/2’s that are still 2/2’s after he dies. And lastly, he’s a Shaman, which helps with a certain Kinship creature that would be happy to rock alongside this guy (aka Wolf-Skull Shaman).

Now the drawbacks to this guy are few, but most notable is the three toughness. With Lightning Bolt back in the format everything with three toughness is suspect, but again, Free Dudes is something that should not be underestimated. Elspeth and Bitterblossom (even with the life payment) have proven that if you can pump out a dude every turn, for whatever the payment, that you can continually put pressure on your opponent until you run them over. Master of the Wild Hunt gives you that and a way to kill your opponent’s creatures, and works awesomely with guys like Knotvine Paladin and cards like Overrun. There is no shortage of interesting combos that can result from this guy, and he uses his Wolves to destroy your opponent’s creatures while standly safely on the sidelines.

I for one expect the next generation of Elf / Shaman decks to feature Master of the Wild Hunt, along with Green/White token strategies. And if it was even possible, Chameleon Colossus got even better! Yes!

Now over the past few weeks everyone has been freaking out about the loss of damage on the stack, aka Mogg Fanatic Got Robbed. But as the weeks wear on, and people calm down, they recognize that things need to change for the game to grow as a whole. And yes, deathtouch got nuts, lifelink got worse, and sacrifice creatures like Dauntless Escort will no longer be bombtastic, but Magic 2010 doesn’t just change the game rules–it changes the tournament rules as well. Here are some new tournament rules changes coming with the release of Magic 2010.

The first is you may now have and use sideboarding notes in a match. This doesn’t mean you can use notes during a game, which is still prohibited, but now you can use any notes you like to remember what to take out and what to put in for each archetype you face. For some, this is advocating a ‘cheat sheet’ from which to work off of. For others, it pushes the viability of rogue decks because now you can keep extensive notes on how to play each matchup, and use those notes to your advantage.

The second major change is that spectators may now request that you wait while they fetch a judge. Now this is the tricky one, as it means you may be in the middle a tense moment and all of a sudden an onlooker thinks you made an illegal play and everything is disrupted. Sure you don’t “have” to pause for them, but in the real world my guess is these interruptions will all be given creedence, and as such you could be in for a few new annoyances. I don’t like this change because giving spectators any sort of leeway over what’s happening doesn’t seem like a good thing. Yes, I’ve seen illegal plays and had to call judges over. And yes, sometimes you don’t catch them fast enough. But there’s a difference in the ability to call a judge over and the ability to stop a match in play, or, to quote, “ask the players to pause” while you do so. You can’t tell the players why you’re asking them to do so, you may only ask them to pause and get a judge over there. I gotta say it’s not the most exciting change and the one I’m most worried about.

The last minor change of note includes finally not giving a crap about the order of cards in your graveyard, which is silly at best and annoying at worst.

Lastly I’ll mention Duels of the Planeswalkers was launched last week and I gotta hand it to Wizards of the Coast – It’s the first digital product I can recall in a looong time that doesn’t suck. In fact, it’s down right marvelous. Sure I can complain about there being no option to restart a game easily or skip the rest of my turn, but it is Magic, it is easy to learn and play, and it more than pays for itself. Yep, just by playing you can get a foil, alternative artwork Garruk Wildspeaker, meaning this $9 game pays for itself at least twice over. That’s a $20 card just for playing! I’ve put in quite a few hours with this game and can safely say it is fantastic.

But seriously, give us the ability to skip the rest of our turn. It shouldn’t really be necessary to wait until the timer goes all the way around… twice… before our turn is over. Make it an ‘advanced option’ if you like, but make it happen.

All right, that’s all I have time for this week. Join me in seven days when we do this all over again, and snag a playmat for me, would you? Until next time, Magic players… this is Evan Erwin. Tapping the cards… so you don’t have to.