Hello everybody, and welcome to another edition of the Magic Show. This week we’re featuring the Magic Show exclusive new Magic Player Rewards card, talk about the return of States with the man responsible for doing so, discuss the recent Banned & Restricted Announcement, and go over a raft of spoilers from Shards of Alara. Let’s go!

Okay everybody, for those who have played in at least 20 tournaments since they last received a shiny textless Wrath of God or Damnation, prepare to feast your eyes on this: The latest Magic Player Rewards Textless Foil is Cryptic Command. Check out that artwork. 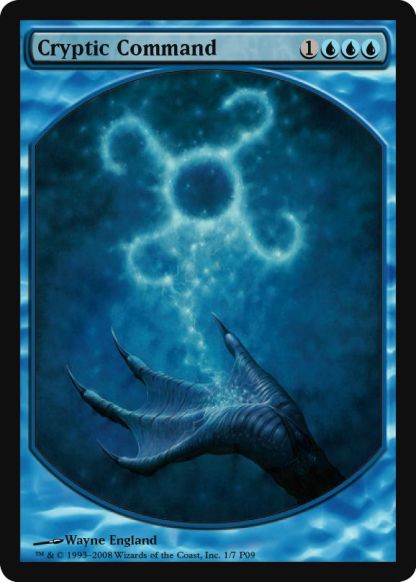 My God… so beautiful. And remember, this is shown non-foiled so you can properly see it. Just imagine it all shiny and beautiful and destroying your opponent’s combat steps.

I know that I certainly haven’t missed the irony of printing a textless Wrath of God, Damnation, and now the Blue Wrath of God, Cryptic Command, in succession. I for one eagerly await the arrival of mine and can’t wait to put it in the Cube.

For more on Magic Player Rewards, visit the Magic Player Rewards section of the Magic the Gathering website, found in the Trading Card Game – Resources section. Be sure to sign up there so you can get free, awesome cards like this mailed to you every so often. I’d like to thank Wizards of the Coast for providing me this exclusive unveiling, and I’ll be back next week with an incredible Shards spoiler that I think you’re going to really geek out over.

Last year was supposedly the death o’ States. No more States for you, that time has come and gone. And throughout the Magic community there was much gnashing of teeth and complaints to be heard, myself included. I was extremely upset that one of the most fun and interesting tournaments of the year was being cancelled. States was important for community, new deckbuilding ideas, and fostering local competition. And now it was gone.

But there was hope! A man named Glenn Godard came to the rescue of Magic player’s everywhere. I got a chance to talk to Glenn earlier this week, so let’s hear his thoughts on the matter:

Thank you Wizards of the Coast! Sensei’s Divining Top is now banned from all Extended tournaments as of September 1st. This is such a huge relief. Now for those who think otherwise, there were two cruxes to this argument:

1. Counterbalance is ridiculously un-fun. Whenever you get free, reusable counterspells, the game has turned into something that is the opposite of fun. I don’t know if you’ve ever stared down the inevitability of Counter-Top with a stack of one-drops in your hand, but my God is it awful.
2. I’m willing to bet that 99.9% of all games that went to extra turns in the last Extended PTQ season were due to this stupid artifact.

I don’t know how maddening it was to you, but “End of your turn, Top.” and “Draw, Top.” and then “Fetch, Top” was uttered about a gazillion times last season. Our own Innovator, Patrick Chapin, famously declared that any good deck in Extended began with four Sensei’s Divining Tops or four Golgari-Grave Trolls. And while the latter may not be true, I’m convinced that during last Extended season, most of the winners were taking home the prize thanks to the lack of randomization on the top of their deck. The type of randomization that allows for interesting game states, and also the type of randomization that doesn’t make me wait 5 minutes for you to fiddle with your top three cards, huff, and finally pass the turn after doing nothing. Ugh.

While it may seem trivial to ban something primarily because it made tournaments last an insane amount of time, I can assure you every PTQer this fall will be silently thanking WotC for this wise decision.

But that’s not all, of course. Wizards has made the brave and bold move to remove the power level errata of Time Vault. Stephen Menendian can tell you more about this than I can, as he’s championed changing its power level errata since its inception. But here’s the skinny: You should, according to Richard Garfield, be able to Twiddle a Time Vault and take another turn. Sounds simple enough, right? Well, for years Wizards was convinced that Twiddle should not, in fact, untap Time Vault to allow you to take another turn.

This issue is so convoluted and ridiculous that Wizards themselves are going to publish an “Update Bulletin” on September 24th, my birthday coincidentally, explaining the decision. Maybe there will be a flowchart or something.

They also unrestricted five cards from the format which is sure to shake up what Vintage players used to call their metagame. Suddenly they have more Moxen to play with, in both the Diamond and Chrome forms, the latter Mr. Menendian suggested they not unrestrict. There’s Dream Halls and Time Spiral to go nuts with, and Personal Tutor, swept up in the wave of Restrict Everything That Has Tutor In The Title fracas a few years ago, can now be played as a 4-of so you can, at sorcery speed, go find another sorcery… and put it on top of your deck. Now you’re playing with power!

Lastly, though it would’ve been for nothing but posterity’s sake, I wish they had banned Bitterblossom from Lorwyn Block Constructed. Sure, it doesn’t make a difference to anyone now that the PTQs are finished, but this really was a big mistake in power level and to recognize it will be important for future generations looking back at older blocks. Oh well…

Okay, so Shards of Alara is rapidly approaching, and all I can say is the flavor of this set is absolutely out of this world. First we’re back in the realm of humans, which is really exciting after going through one full block of toilet paper-endowed humans (Time Spiral) and four whole sets of no humans at all, and they gave us a whopper to begin. Check out Sigiled Paladin:

First, the art on this guy is destined for posters and promotional materials. What a mind-blowing image. I know Magic art has only been getting better since I came back during Mirrodin, but this set is just gorgeous. Anyway, Paladin here is important because Exalted stacks. It’s so damn important to understand this allow me to mock up its â€˜actual’ keyword (“It Stacks”).

That means that Turn 2 Sigiled Paladin into Turn 3 Sigiled Paladin, swing, gets a 4/4 first striker in the red zone. Also note that it provides this bonus whether or not the single attacking creature has Exalted or not. This allows the mechanic to affect more than just other Exalted creatures, and that sounds awesome.

Personally I hope there will be a W 1/1 with Exalted to allow you to curve up Exalted creatures into a White Weenie powerhouse. What we do know is there is a five-drop angel with this ability, and her name is Battlegrace Angel:

Now this sort of Serra Angel / Exalted Angel hybrid thing is going to be very dependent, I think, on how many creatures have Exalted, the power of White in general in this set, and whether you can actually untap with this Angel before she’s Flame Javelin’d into oblivion. However, the fact that she grants her ability as soon as she hits the board — to any creature attacking, whether they have Exalted or no, that is some powerful stuff. I wouldn’t count this girl out just yet.

Speaking of Angels, some players at my local store were geeking out over Stoic Angel:

Now I thought they were excited because this looks like a great multiplayer creature, but they were convinced of its Constructed applications. Granted, this Angel looks like the number one thing to slow down a weenie or Faerie rush. However, since this color combination no longer has Mystic Snake or Momentary Blink in Standard, we may see Stoic Angel rocking EDH decks, but Pro Tour tables could be a stretch.

Next we see our third Planeswalker. While Ajani Vengeant was neato, and Tezzeret the Seeker looks mighty scary, I think the bomb diggity is right here in Sarkhan Vol:

Damn. Daaaaayum. That’s all I’m gonna say about this guy. In a word, he seems absolutely ridiculous. I don’t know how blatant a Planeswalker can be, but this one is doing everything but jumping from the rooftops about how insane his abilities are. Every one of them wants to do something the R/G Aggro deck is geared towards, whether it’s the quick beats, stealing your best guys, or providing such an overwhelming advantage that you can’t recover.

Many players are lamenting that because this Planeswalker and perhaps Tezzeret is incredibly strong that the Mythic rarity is broken. I don’t think so. It does show that good cards – okay, very good cards will show up in that rarity, but you can’t expect Wizards of the Coast to throw all the goodness in the gold symbol.

So, for example, here’s what I consider the epitome of a Mythic Rare. Check out Lich’s Mirror:

Lich’s Mirror
5
Artifact
Mythic
If you would lose the game, instead shuffle your hand, your graveyard and all permanents you own into your library, then draw seven cards and your life total becomes 20.

That is awesome. I don’t care who you are, if you understand how to play Magic, that is simply a fantastically designed card. It’s incredibly unique, challenging, and gets the juices flowing. I love how this combos with cards with Suspend, how it doesn’t empty manapools like the worthless Worldpurge from Shadowmoor, and how every Johnny all across the world begin figuring out a way to abuse this thing.

The most exciting ideas presented so far include things like Suspending a Greater Gargadon and killing yourself just before it un-Suspends, and winning the game by, uh, losing the game with Hurricane or some other X spell that deals damage to all players. Other players believe that this could be good in control decks anyway, as they run a lot of cheap removal spells like Condemn that would be fantastic to shuffle up and draw into when your opponent ekes out that last point of life.

Either way, this is the most mind-blowing card I’ve seen since Platinum Angel or Mindslaver, and it is wonderfully innovative.

Lastly I want to cover the resurgence of Zoo in Extended. Yes, Shards isn’t completely spoiled so I’m sure there will be more weapons to add, but Wild Nacatl is certainly not a bad place to start. With your myriad of fetchlands and first turn Stomping Ground into second turn Temple Garden, you’re looking at the best Rogue Elephant ever printed ever. That’s two evers for the price of one, folks.

Look at its turn 3 cohort, Woolly Thoctar. Three mana. 5/4. Put that in your pipe and smoke it, Doran. Who cares for a three mana 5/5 that makes all my combat math weird when I can just play three mana for a 5/4 and not worry about it? Can you imagine Turn 1 Wild Nacatl or Kird Ape, Turn 2 Watchwolf, Turn 3 Thoctar? That’s some good beats right there. Lions, tigers, and bears! I just wet myself on my chairs! Er…something.

So that’s it for this week, peeps. Next week we’ll be back with another raft o’ spoilers, including an exclusive Magic Show spoiler that you have to see to believe. Until next time Magic players, this is Evan Erwin. Tapping the cards…so you don’t have to.