As Zvi put it, Meandeck Tendrils is the fastest deck in the history of Magic. That’s why, although it is a huge tournament disappointment, it is still one of my proudest creations.

I’ll spare you the blather about what the deck does and how it works and send you immediately to Justin Walters’s hilarious, entertaining, and witty article on the deck.Â  (If you need a further incentive to read it, Ted Knutson said it was his favorite magic article of 2005 – that means it’s good, people).

If you haven’t actually read Justin’s article, I hope you at least scanned it.

In my articles on the deck, I claimed a 66% goldfish percentage on turn 1 if you play the deck perfectly.Â  Today, that percentage is upped by a substantial margin.

I don’t turn to decks and update and revise them unless I think there is more than just a minor adjustment to be made.Â  Today, I’m going to unveil technology that makes this deck even faster than it was before. That doesn’t mean I think it would be tournament viable.Â  This deck could have 95% turn one goldfish percentage, and I still probably wouldn’t take it to a tournament.Â  For that reason alone, Meandeck Tendrils is fascinating for all sorts of theoretical reasons.Â  The primary reason it’s unviable is because you have to compress all of the numerous decisions of a typical Vintage game into the space of one turn – and do that in a reasonable amount of time.Â  Unless your name is Deep Blue or Gary Kasparov, I don’t think you can play this deck at tournament either, but you’re welcome to try.

Here is my new, revised decklist:

Repeal is the key new tech.Â  Repeal breaks the golden ratio – it is a free cantrip.Â  The key bottleneck in this deck is mana, and so this card is a godsend.Â Â  It’s the closest we will ever come to actually printing: 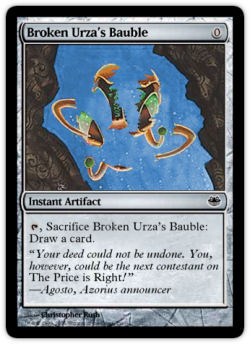 In fact, in some ways Repeal is better because it adds two to the Storm count.Â  Pretty exciting stuff!

I’ll run through a few goldfishes with you.Â  I do these goldfishes the honest way – no revision, no cheating… just some back-to-back games, no cherry picking.Â  I do a five-pile card shuffle, three side shuffles, a cut to the middle, and draw seven cards.Â  And here we go:

Sadly, I don’t think this is going to win on turn 1.Â  A little disappointing that our first goldfish is a turn 2, but so be it. The play is: Tropical Island, Darkwater Egg, and pass.

Use U to play Brainstorm (Storm 6), drawing Yawgmoth’s Will, Tendrils of Agony, and Spoils of the Vault.

Put Tendrils on top, and then Yawgmoth’s Will on top of that.

Play Lion’s Eye Diamond and sacrifice it for BBB, removing the Tendrils in hand from game (Storm 9).

Play the Cabal Ritual from the graveyard (with threshold).Â  BBBBBB floatingÂ (Storm 10).

Play Tendrils of Agony from the graveyard, and kill your opponent.

You could do a lot more there if you wanted, but it’s not necessary.

The reason that hand couldn’t win on turn 1 was because it didn’t have Black mana or access to Black mana. 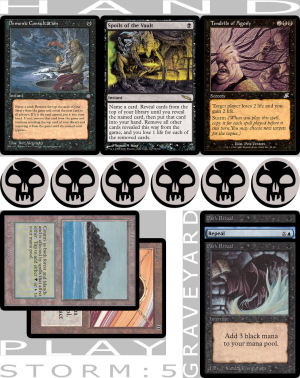 Now, your hand is Demonic Consultation, Spoils of the Vault, and Tendrils of Agony with six black mana floating.Â  What do you do?

Think about it, and then scroll down for the answer.

You could Consult for a Restricted card, like Black Lotus or Yawgmoth’s Will – and as long as neither one is in your top six cards, you win the game.Â  However, I think there is a more certain solution.

I would Demonic Consultation for Cabal Ritual.Â  Play the Ritual, then Spoils of the Vault for either another Cabal Ritual or a Dark Ritual (depending on what I had removed with the Consult).Â  If my library is really low, you could just get Lotus (assuming its in there) then play the Tendrils for the 10th spell.

Demonic Consultation, naming Cabal Ritual (Storm 6).Â  There is a Cabal Ritual in my top six cards, and then there is another 24 cards down.Â  That leaves 22 cards in my deck.Â  Incidentally, the two remaining Dark Rituals got removed from game.Â  I know that there is a Yawgmoth’s Will, Black Lotus, and two Cabal Rituals in those 22 cards. Â The Safest card to spoils for will obviously be another Cabal Ritual. Â But first:

Note: There has been a rules change since I last wrote about Meandeck Tendrils.Â  When I wrote about it last in early 2005, you could play Land Grant, reveal your hand as the cost, then respond with Brainstorm. Then your opponent would have to decide to counter the Land Grant based upon cards in your hand they can’t see – cards that are different then when you revealed your hand.

Now what do you do?Â  We know we probably will play Mox into Mana Vault. But what do you do regarding the Consult and the Brainstorm?

Brainstorm and Demonic Consultation have some important synergies.Â  If you Brainstorm, then you’ll be able to remove the two worst cards from game via Consult.Â  In addition, you’ll lessen the chance that the card you name is in the top six.Â  The flip side of that is that if you Consult and then Brainstorm, you’ll dig more deeply through your deck. Â That’s not very compelling, compared to the synergy of Brainstorm followed by Consult.

However, this hand is complicated by the presence of a shuffle effect: Land Grant.

There are several permutations possible:

We can eliminate any permutation that plays Consult before Land Grant, simply because the risk of removing the Bayou is unacceptable.Â  Thus, we can eliminate (2), (3), and (4).Â  That leaves us with (1), (5), or (6).

(1) and (6) eliminate the aforementioned synergies between Brainstorm and Consult.Â  (5) maintains the synergies.Â  However, (1) is different from (6) in a critical respect.Â  If we choose (1) or (5), there is a chance that we’ll see another Brainstorm.Â Â  If we do, we may wish that we had another shuffle effect before playing Consult. Last week I talked about the nature of skill in Magic – that skill is composed of two processes: forward thinking and pattern recognition. Forward thinking encompasses weighing the risks of two decisions trees or lines of play.Â  This is a tough line of play to optimize.Â  The basic issue is whether the possibility of seeing another Brainstorm or draw spell off of the Brainstorm (which would be optimized only if you Land Grant after Brainstorm but before Consult) outweighs the benefits, and has fewer risks than maximizing the synergies between Brainstorm and Consult.

I honestly have no idea if it does or not.Â  The benefits are so slight – and the costs are so slight – that it is very hard to weigh them.Â  If any reader can quantify that, I’d love to see it.Â  Since I am incapable of figuring out which play is optimal based upon forward thinking here, I’ll fall back to pattern recognition.Â  I think Brainstorm plus shuffle effect is one of the most powerful combos in Vintage.Â  Thus, I think the right play is (1).Â  Although I think the second-best play is (5).

Note that if the rules worked as they did in early 2005, you’d play the Land Grant and respond with Brainstorm.Â  That’s not an option.

Put back Tropical Island for sure, and Mox Emerald (I think).

At this point, playing the mana in the right order is critical.Â  Do you know what to do?

This way we have UUBBB instead of UBBBB.Â  Regardless, it doesn’t matter in this particular game because we have already achieved the requisite Storm count to win.

We have five mana floating.Â  This is a simple formality:

Two Tendrils were in the top 6 cards, including the top card, but the third was 15 cards down.

Ironically, if we had been forced to play the second Egg, we still would have won.

In my experience, any hand with Black Lotus wins on turn 1 no matter what.Â  The key bottleneck is usually mana – hence why Repeal is so good.

We lead with Lotus Petal (Storm 1).

There is the question of whether I should play and break the Delta here.Â  If my intent is to play a Chromatic Sphere or a Night’s Whisper, then the question is whether the benefit of the shuffle effect down the road will outweigh the potential risk of drawing a land.Â  I think last game demonstrated the power of shuffling.Â  Thus, I’m going to use pattern recognition to support the conclusion that I should not break the Delta at this time.

I’ll put back a Night’s Whisper and Chromatic Sphere.Â  B floating.

At this point, I’ll break the Delta for Bayou.

I now have several options:

1) I could play Night’s Whisper immediately, but unless I draw another mana source I can play and use, that would my turn.

2) I could play Chromatic Sphere and break it, but then I’ll only have one mana floating.

3) I could play Sol Ring, but then I’ll have B2.Â  From there I could play:
a) Night’s Whisper with one colorless floating.
b) Spoils of the Vault for…?
c) Chromatic Sphere and end up with BB floating again.

4) I could play Spoils of the Vault right now for something.Â  If I do, I could name Dark Ritual.Â  If I don’t die, I can Ritual and then play Sol Ring, leaving BB2 floating.Â  From there I could play Night’s Whisper or Chromatic Sphere.Â  That seems like the best play.

Play Cabal Ritual with Threshold, and then Tendrils of Agony (Storm 9 and 10).

This hand is really interesting, but it is almost impossible to play unless you have one key pattern down: the interaction between Mana Vault and Darkwater Egg.

The key to this hand is recognizing that we are going to Spoils for Egg and then Egg and then Brainstorm.Â  Those four cards will hold the key to our victory.

Play Night’s Whisper (Storm 9) drawing Spoils of the Vault and Demonic Tutor.Â  I’m at 17 life and I have five Black floating.

The obvious play is to Spoils for Tendrils of Agony.Â  However, we are only at 17 life.

I think the smarter play is to Demonic Tutor first, just to think the deck out a little more.Â  Thus, we could Demonic for Black Lotus or whatever.

I play Spoils for Tendrils and the Tendrils is the seventh card downÂ (Storm 12).

My kingdom for a Black mana…

This is an obvious play:

At this point, you want to Spoils (Storm 8) for something you can play right now, and then follow up with lethal Tendrils of Agony.Â  I’ll name Brainstorm.Â  It was the 14th card down.Â  I lose 13 life, going to 5.Â  I sacrifice the Petal to play Brainstorm (Storm 9).Â  I then tap Bayou and Mox Jet, and play Tendrils of Agony for Storm 10.

Well, it was fun to come back to this deck.Â Â  Maybe a year from now, the card pool will have offered up something else to try. Â

Until then, happy goldfishing.