In my overview of Commander 2013, I mentioned how excited I was that Wizards reprinted Hua Tuo, Honored Physician. I’ve been dying to get my hands on Hua Tuo for years and have come this close to pulling the trigger on buying one several times but always changed my mind due to its price. I mean, it’s not like it was some grossly overpowered card or anything—it was just a sweet effect to have a Volrath’s Stronghold tacked onto a little green creature.

I hadn’t really thought too much past desire before, but now that I’ve got a copy of Hua Tuo, I’ve been turning over the implications of being able to stack your library with creatures from your graveyard. He obviously slots right in a deck with Mayael the Anima. But the more I thought about him, the more it seemed cool to have him as your actual commander.

Let’s examine him, shall we? 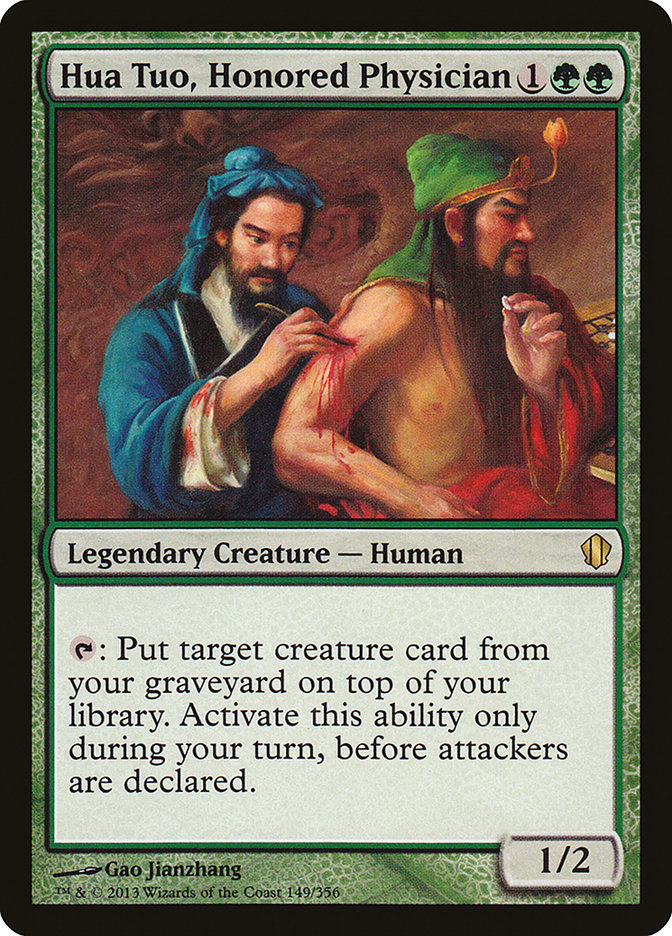 When it comes to mono-green, being Human is a rather inconsequential tribe to come from, and being a 1/2 is downright tiny. So really, it’s the activated ability on the good doctor that makes him worth playing:

{T}: Put target creature card from your graveyard on top of your library. Activate this ability only during your turn, before attackers are declared.

Hua Tuo operates at Portal speed, which basically means you can’t monkey around during other players’ turns. While that’s unfortunate—especially in a multiplayer game like Commander—it’s really not so bad when you consider that your upkeep step counts as being during your turn, before attackers are declared. The upkeep step is also before your draw step, which means instead of drawing the random card on top of your library you can draw a creature that had previously been in your graveyard. So if your opponents keep countering or killing your Avenger of Zendikar each turn, you can keep drawing and recasting him until he sticks.

Let me pause and have a Vorthos moment before we continue. How exactly does this ability relate to being an "honored physician?" Is it representing of bringing people/creatures back to life after dying?  If that’s the flavor, putting it back on top of the library doesn’t seem to fit to me . . . but I suppose any other way to get back the creature would be too powerful and would have required making the creature and/or the activation cost more. As it is, three mana to cast him and a simple tap to activate is pretty darn cheap.

Alright, so we can see that if a creature dies that we want to play again, we can use The Doc to let us draw him again . . . but if we play Hua Tuo on turn 3, odds are pretty good that we won’t have any creature in a graveyard worth drawing. Hey, wait a minute—speaking of "drawing" and "graveyard" . . .

Cards with Dredge seem like the perfect complement to this strategy, turning Hua Tuo into a neo Worldly Tutor for creatures depending on how many juicy targets you flip into your graveyard by using the dredge mechanic. While you lose out on some sweet dredge cards by being mono-green, there are still some good ones, including the clutch Life from the Loam that keeps you flush with lands. Slippery Karst and Tranquil Thicket are particularly sweet in conjunction with Life from the Loam. Dredge is also a nice way to reset the top of your library if you’ve been stuck with dreck from Sensei’s Divining Top activations or peeks with Sylvan Library.

Of course, playing dredge cards in Commander is a little nerve-wracking because milling a bunch of random cards into your own graveyard makes you a likely target for graveyard hate, which most Commander decks have at least a card or two dedicated towards. The best option is to just use your dredge conservatively, and when you find a decent-enough creature for Hua Tuo to work on, stop right there. Another option is to run Witchbane Orb, which gives you hexproof. Popular hate cards like Bojuka Bog, Tormod’s Crypt, and Nihil Spellbomb all target a player, not the graveyard itself.

I also think Bow of Nylea isn’t a bad option to shift cards you don’t want to nab with Hua Tuo or Life from the Loam back into your deck and make your graveyard less of a tempting target. Worst-case scenario you get your graveyard nuked with a clutch card removed to exile, so I’m going to toss a Riftsweeper in the mix to give an option of getting that card back into the mix.

Alright, so it’s nice and nifty that we can use Hua Tuo to redraw our dead creatures . . . but we can certainly do more than that. Used alongside Bloodline Shaman we can actually draw that card Hua Tuo put on top of our library so we’re not even really losing a draw. Maybe we want our Mul Daya Channelers to go large or to guarantee a hit from Garruk, Caller of Beasts. Maybe we want a chump-blocking Saproling from Druidic Satchel. 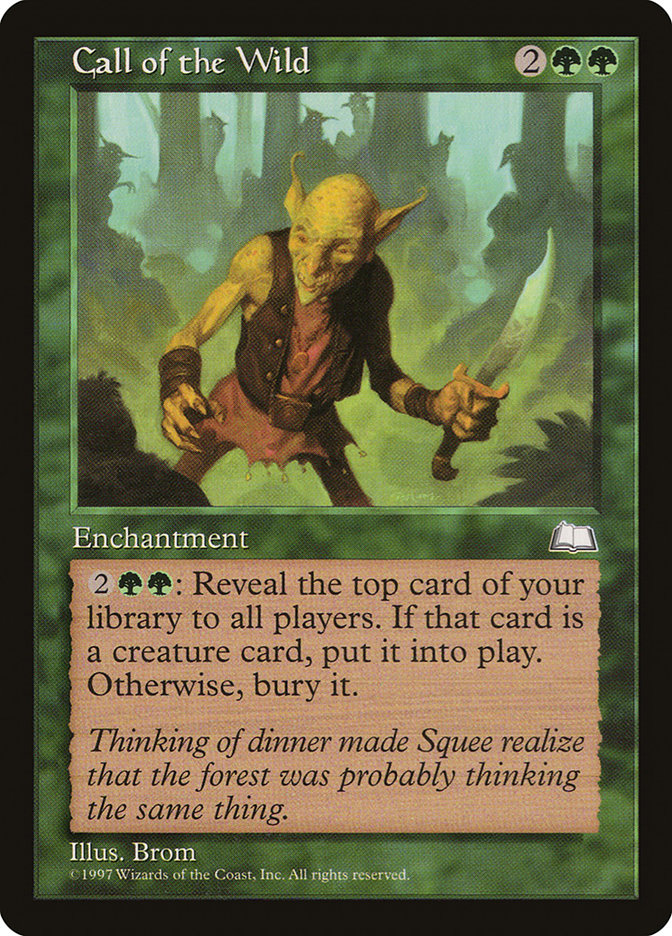 That’s all small potatoes, though, when what we really want is country-fair contest HUGE! I’m talking Call of the Wild, Zoologist, Thicket Elemental, Mosswort Bridge—let’s put something huge and impactful on top of our library and then shoot it out into play at a discount price! Lurking Predators is already a powerful card in Commander so putting something sweet on top of your deck can really make tough decisions for your opponents casting spells.

Summoning Trap is a one-shot cheat that can be a nice way to get around your opponent trying to counterspell your large creature; so long as you haven’t declared an attack step yet, cast your huge creature, your opponent counters it, activate Hua Tuo to put it back on top of your deck, and then cast Summoning Trap for zero mana to put it into play.

If we’re going to the trouble of dredging, stacking the deck with Hua Tuo, and activating Call of the Wild to put it into play, we want some big monsters to make it worth the trouble. Starting at six mana, I wanted to look for some high-impact creatures and settled on these. Garruk’s Horde in particular is pretty sweet since you can cast creatures off the top of your deck, which works great with Hua Tuo.

Hornet Queen might not be considered a "big monster," but I think it’s a powerful high-cost creature that’s certainly worth the trouble, and if I can get Craterhoof Behemoth to hit afterwards, that can be a game-winner. Krosan Tusker would be a fun early draw with Hua Tuo in play since you can cycle him for a card and a land and then put it on top of your deck to do it each turn. You can do similar later-game shenanigans with Skarrg Goliath’s bloodrush ability, an uncounterable +9/+9 and trample boost to an attacker. 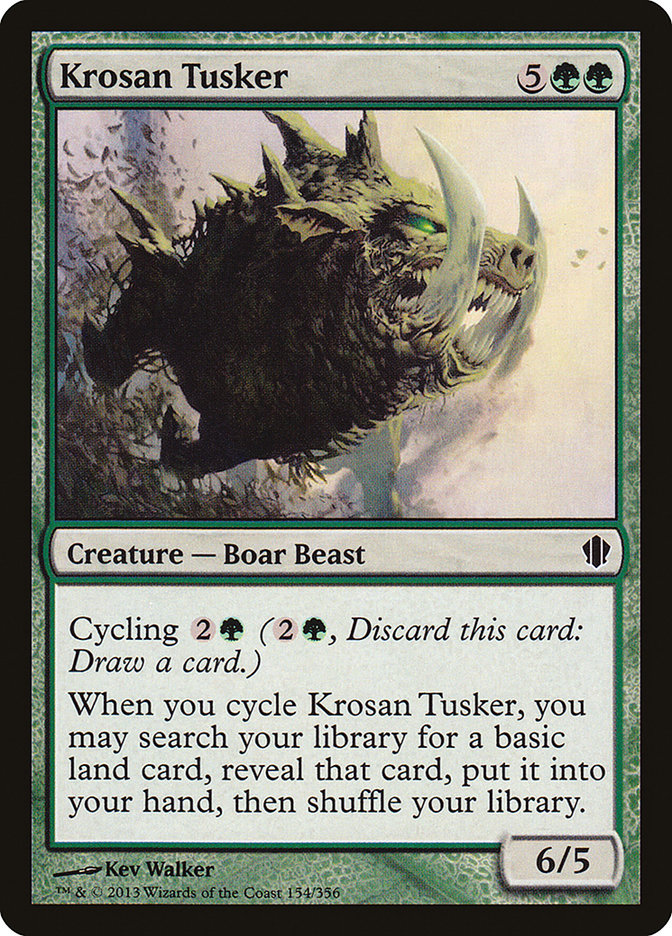 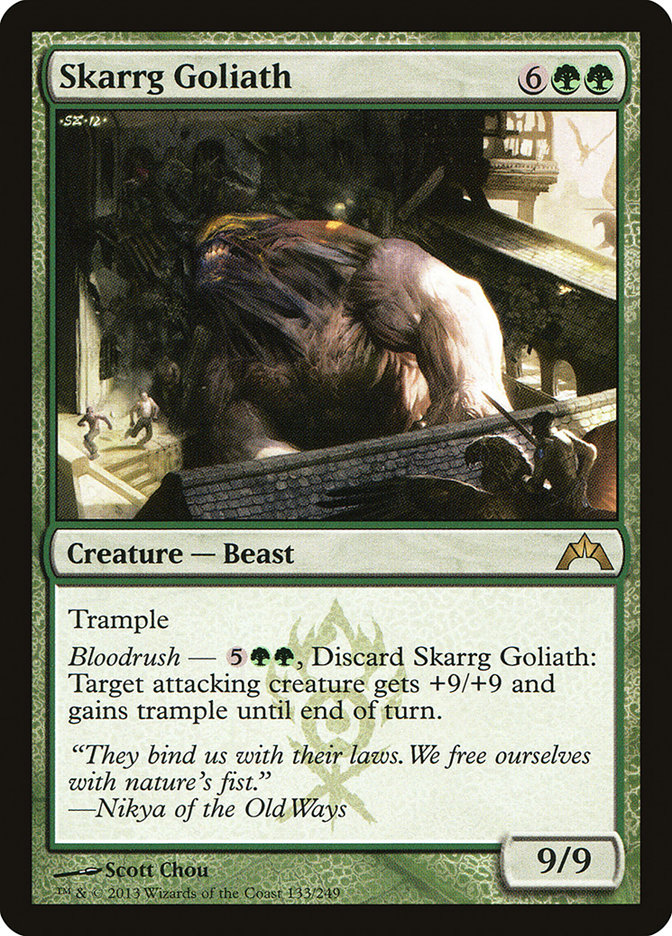 I feel a slight pang of regret that the Eldrazi Titans don’t really work so well with Hua Tuo’s ability and that I can’t really benefit from Artisan of Kozilek’s ability, but I do think I can do some work with It That Betrays.

I love the big-boom utility that comes along with putting Sylvan Primordial, Woodfall Primus, or Terastodon into play.

To ensure that I had something huge worth abusing with the put-into-play-from-top-of-the-deck shenanigans, I’ve got a lot more high-end creatures in this deck than I normally would. This of course runs the risk of drawing too many expensive spells and not enough early action in a game, so I wanted to build in a few relief valves. One is a decent amount of mana ramp so that I’ll hopefully be able to cast some of these earlier than normal. Another is Fauna Shaman, which can pitch the creature to go fetch up a cheaper one you can cast—and with Hua Tuo, you can nab the creature you pitched later on pretty easily. Deathrender is another great way to trade a dying creature in play for a huge monster in your hand. 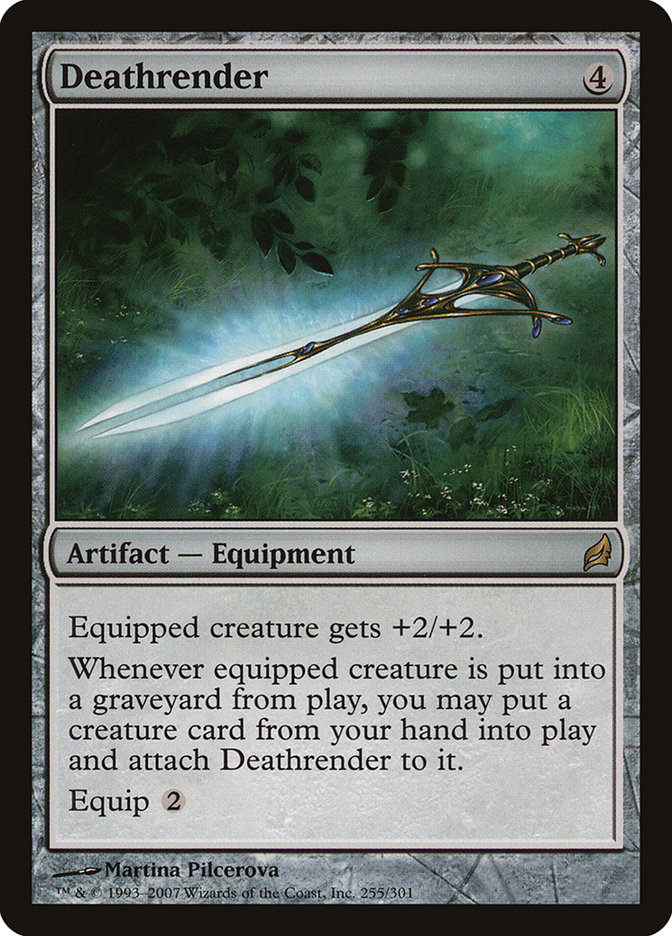 Even the biggest monsters are subject to removal, so since I’m going to some amount of trouble to cheat these guys into play I wanted to build in some ways to make them resistant to removal. Nim Deathmantle is a favorite, as is Eldrazi Monument and Cauldron of Souls.

A big advantage of going monocolored is the ability to stuff your deck with all sorts of great colorless utility lands without hurting your colored mana requirements much at all. Homeward Path in particular seems quite useful because your deck is going to have plenty of juicy targets for blue decks looking to steal your creatures with Control Magic effects or Bribery. This is the sort of deck you can really punish any opponent who gets too greedy when you play Tempt with Discovery. 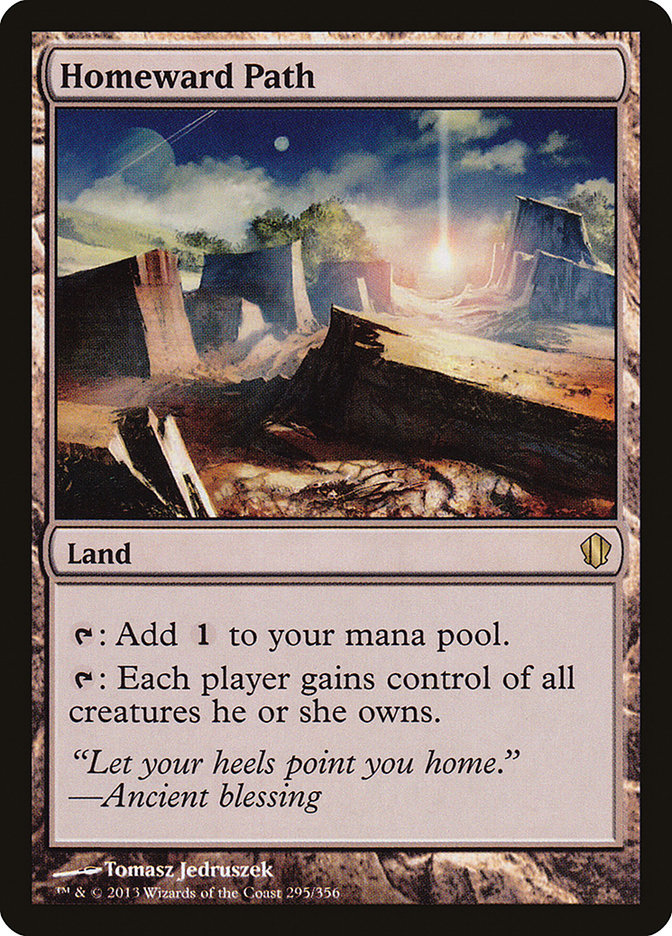 So what do you think?  Have any of you cooked up a deck around Hua Tuo, Honored Physician?  What sort of cards would you put in your version that I might not have thought of?  Let me know in the comments!

Before I go, I wanted to let you know I’m hoping to make it out to Friday Night Magic tonight to play some Standard. I’ve got a spicy brew I’m looking forward to giving a whirl and have my fingers crossed it plays as well as I think it should. There’s a good chance I’ll be able to make it out to the StarCityGames.com Classic Series in Virginia Beach next Saturday, and I would love to play it. I’ll be talking about the deck next week; see ya then!