Forget Goblin Charbelcher. Once you cast that Yawgmoth’s Will, the rest is incidental. You want to win with Grim Monolith/Power Artifact? Be my guest. There’s one huge reason why the Gifts list that got second at Gen Con Champs is different, nay, better than the more popular “Meandeck Gifts” variant, and it has nothing to do with the fact that Volcanic Island counts as a mountain.

So most people are running 4 Gifts Ungiven and 4 Merchant Scroll. They’re great cards, I run two of each myself. Personally, I feel that Gifts isn’t something you want to see turn one every game, and when you do cast it, it should be for keeps. As for Merchant Scroll, past the first one that grabs your Ancestral Recall Scroll is just too much of a tempo loss in an environment that’s becoming more and more about mana management. Don’t agree? Well cut something, because you need to be running four Thirst for Knowledge. 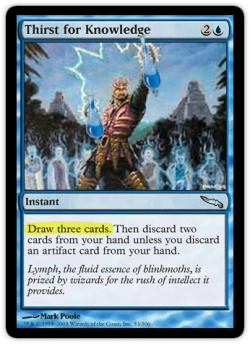 But! But! You only get one extra card, and only if you discard an artifact!

Little known fact: Thirst actually draws three cards. Go ahead; read it, you might be surprised. Just because when it’s all said and done your hand isn’t much bigger doesn’t mean you didn’t draw anything. If anything at all in your hand is less than optimal, the discard is all but negated. Thirst turns excess lands, dead win conditions, and incorrect answers into gas, which is something an extra Gifts can’t actually do. If your hand is just bad, Thirst is an Ancestral Recall. Thirst is amazing for the same reason Brainstorm is friggin’ insane. Furthermore, we’re talking about Vintage here, we all know the graveyard is just a convenient place to keep things on the table so we don’t have to hold them. If your hand is so good you don’t want to get rid of anything, and Thirst draws you three more cards that are too solid to let go of, why are you complaining? Gifts would have only drawn you two good cards, and you don’t even get to keep the Will.

I know you’re thinking that Gifts is a tutor, where Thirst is just random. You’re right, to a point. Keep in mind though, that the Gifts deck is built to draw the most broken plays in the game anyway. Drawing three cards means drawing three good cards. If it doesn’t, you should be running better cards, not blaming your Ancestral. Yes, when you have seven mana sources on the table and a fully stocked graveyard, you’d rather rip a Gifts off the top than a Thirst, but that’s just not how games play out. Winning games isn’t about topdecking from a favorable position – it’s about getting there.


Thirst puts the decision-making back where it belongs.

Both Thirst for Knowledge and Gifts Ungiven reward you for your playskill and familiarity with the deck. Gifts’ ability to do so, however, is mitigated by the ability of your opponent, whereas Thirst gives them no such choice. This of course, doesn’t matter if you’re loaded with mana and throw a Recoup in the mix, but that’s not always an option. Without any other plan to generate card advantage, you could be forced into some tight spots against someone who knows what they’re doing.

If you’re using Gifts Ungiven and Merchant Scroll as your primary method of drawing cards, you’re giving your opponent a huge amount of information. A skilled player can read what’s coming and know exactly what your plan is. A Stax player can determine which lock pieces to drop, and which colors to cut off, and when it’s safe to tap out of Red Blast game two. Fish players can destroy a perfect hand with a single Meddling Mage, particularly from am Aether Vial. Anyone running Forces, or heaven forbid, Mana Drains… I think you get the idea.

This is big. Really, really big. No, bigger than that. The other reasons are enough on their own to run Thirst for Knowledge, but this is why I’m right. Take a look at the decks that people are playing right now. Blowing other choices out of the water in terms of numbers alone, we have Gifts itself, Control Slaver, Fish, and Workshops… boy oh boy do we have Workshops. Two of those four decks use mana denial as their primary angle of attack, and Gorilla Shaman is considered one of Slaver’s better toys in the metagame right now (nothing’s stopping you from running a few in Gifts, either.) There are games where Thirst can dig you out of a tight spot, but you never would have survived to cast Gifts. Sphere of Resistance just makes this even more obvious. Past turn 2, you’d much rather see a Trinisphere hit play than a Sphere of Resistance. You’re going to have a whole lot of trouble chaining Gifts against what’s shaping up to be the top performing deck right now.


And that’s just assuming you drew the Gifts there. If one of those extra Merchant Scrolls is in your hand instead, you’re in an even tighter spot. Scroll for Gifts costs three more than Thirst, four if the aforementioned Sphere is out. Sure, in a Stax soft-lock you can Merchant Scroll for Rebuild, but what does that really get you? You spend two turns tapping down to steal one turn back from the Stax player. That buys you one topdeck, which by the way, is three less than Thirst would have gotten a turn earlier. Sure, if your hand is loaded with Gifts and artifact mana you could win in that turn, but with Thirst in this situation you actually get to cast those cards a turn earlier.

Outside the world of Wastelands, one mana still makes all the difference. I’m not as good with the numbers as I’d like, but I know you’re far more likely to have Thirst mana up on turns one and two than you are to have Gifts mana. Barring an already broken hand, Thirst is a lot better for setting up mana in the early game than Gifts. Breaking a Lotus or tapping a Vault to get two Moxen isn’t exactly a power play. If you have a Yawgmoth’s Will, Black Lotus, Mana Crypt hand, sure a Gifts would be better, but Merchant Scroll wouldn’t, and were you seriously planning on losing that game anyway?

Playing against Slaver or Gifts, Thirst shines in the midgame, where you can cast it with Duress or Mana Drain backup a turn before you could do the same with Gifts, two turns before Scroll for Gifts. It even gives up less mana if they manage Mana Drain it. Isn’t that nice of it?

Splash Damage or, the other 56 cards

There are a few other differences in the lists that appear to be a direct result of the Thirst vs Gifts/Scroll choice. The Thirst list runs Pithing Needles and an Engineered Explosives where Meandeck Gifts runs two Rebuilds and an Echoing Truth. Obviously Merchant Scroll makes Blue instants marginally better, and Thirst for Knowledge does the same for artifacts. It seems most people are under the impression that Thirst requires a minimum number of artifacts to be effectively cast, and cards like Explosives and Charbelcher are sub optimal compromises that have to be made to run them. Most people are wrong. Meandeck Gifts traditionally runs both Needle and Explosives in the board, and Thirst builds run spot removal and mass artifact bounce in theirs, making it really a matter of how one chooses to pre-board. Explosives answers most of the threats that Rebuild/Truth are made to deal with, falling short against opposing Darksteel Colossi, which can be raced or outlasted with your own Tinker. Furthermore, Explosives does a lot more in the Fish and Control Slaver matchups, where they’re sometimes boarded in.


Pithing Needle deals with a whole world of cards the others can’t, most notably Strip Mine/Wasteland, Bazaar of Baghdad, and Goblin Welder (Echoing Truth will buy you a turn, sure, but you’re not really in the best position if you’re forced into that play.) I know a lot of people swear by the maindeck Echoing Truth, usually after they lose a game to something ridiculous like a Reanimated Phantom Nishoba, but if you honestly think you’re going to have trouble winning games two and three against Platinum Angel/Diplomatic Immunity.dec, maybe you should consider an easier game. I suggest Go Fish.

I could get into Duress over Misdirection here, but that’s another issue entirely. What I do want to bring up is that Merchant Scroll doesn’t actually make Misdirection any better. The amount of times you’ll want to Merchant Scroll for Misdirection over Force of Will is just about limited to the mirror, in the instance they tap out to Scroll for Ancestral and pass. Other than that, there’s no correlation. I’m not going to argue which is better to run overall, but Misdirection doesn’t make the extra Merchant Scrolls better like Echoing Truth does, so don’t let that factor into your deckbuilding.

I know I said the cards you finally use to kill with aren’t nearly as important as the rest of your deck – I stand by that. That said, just because you could use Illusions of Grandeur/Donate as your kill doesn’t mean you shouldn’t be running the best cards available to you. Both builds run a Burning Wish, and the Thirst list could easily run a Tendrils of Agony in the board. I’ve done it before, and I cut it, because it’s just not that good. Extra Gifts and six maindeck Rebuilds make it better, but having to cut Thirsts would be enough of a reason to avoid this plan. Belcher over Tendrils has plenty of advantages on its own, the most important of which being the ability to win outside of a totally busted Will turn. If you happen to be going ridiculously broken, sure, Tendrils will kill, so will Belcher. If you’ve burned your Will getting Colossus in play, and that gets trumped by some random hate card or a bounce spell, you’re going to be hard pressed to win as easily with Tendrils. Though it’s not the norm, enough games are won by Belching off the top for 5 or so turns, and while it seems unimportant, those are games you would have lost with Tendrils of Agony.

Games become matches and matches become tournaments very quickly. Give yourself every edge you can.