Michael Swipes Right: Emrakul, the Promised End is immensely powerful, despite the fact that it still isn’t clear exactly where the big bad girl should go. I’ve talked about it in a few different mediums, but most of the apprehension I’ve seen from folks towards the Eldritch lord seems to come from their lack of appreciation of the power of “Mindslaver.” The average Mindslaver turn is going to result in “your opponent” spewing off most of their resources destroying their own battlefield position before suiciding their best creature into Emrakul herself. They then have exactly one turn thanks to Emrakul being “fixed” to peel a sorcery-speed answer to a 13/13.

If we put any work into her, she’s going to come down for eight or nine mana, which is a reasonable price to pay for what is likely to be a 5-for-1 attached to a win condition. Don’t be surprised to see Emrakul floating around town, but I hope for everyone’s sake that it doesn’t happen too often – getting your turn stolen sucks.

Tom Swipes Right: An enigma of a lady. Trust me, she’s a few years younger than what it says on her ID. Make sure take her out to a well-lit restaurant. And make sure that if you promise to be there at 8pm sharp to do so. Make spur-of-the-moment decisions and she’ll turn your world upside-down. 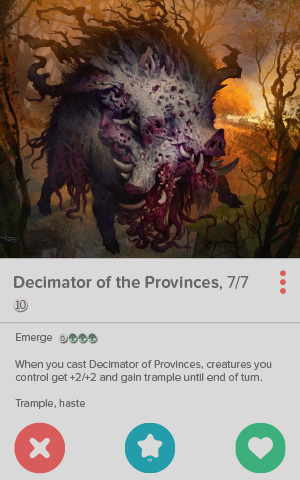 “I’m a big beautiful boar that don’t need no man.”

Michael Swipes Right: Emerge is busted. Every card with this mechanic in Eldritch Moon that I’ve seen so far looks incredible. This is to be expected, though, any “cost-reduction” keyword in Magic has been historically powerful and I have no reason to believe that Decimator or any of its Eldrazi kin will be any different.

Decimator itself is exactly the kind of top-end threat that a Cryptolith Rite or any Duskwatch Recruiter deck is interested in as a massive payoff. It’s fairly easy to expect to cast this card for six mana every time, where it will likely generate about thirteen power that turn. That’s a ridiculous rate. Not only that, but the Boar itself is gigantic – many messy late-games are going to be decided by both players running low on gas, only for an Eldritch Boar to pop out of an Elvish Visionary.

Tom Swipes Left: Personally I’m not interested. But I can see how some guys might view her as a perfect ten. If Deci is your type, I suggest you don’t be boring. She’s been known to bring life to a party once she comes out of her shell. 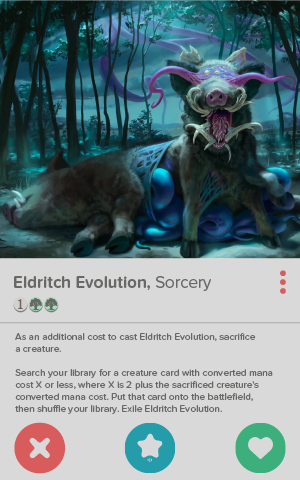 Michael Swipes Right: This card is pretty scary. I’m not exactly sure what wide range of implications exist now that this card has been printed, but being called a “Green Tinker” doesn’t seem like much of a stretch. Let’s ignore the world where we are cheating Craterhoof Behemoth onto the battlefield by sacrificing Myr Enforcer and Allosaurus Rider for a moment and look at the applications for a Standard deck.

Turning Reflector Mage into an Archangel Avacyn is fairly good but not exactly pushing the envelope. Cards like Whirler Rogue and Pia and Kiran Nalaar are a little more interesting to me. With the former turning into Drowner of Hope and the latter becoming Woodland Bellower, I can start to see some potential for Eldritch Evolution in Standard, but for the most part I think we are more concerned about the Kitchen Finks – Kiki-Jiki, Mirror Breaker sequences.

Something good is going to come of this. There’s just too much flexibility built in for minimal costs.

Tom Swipes Left: Stuck up and needy. She’s gorgeous and she knows it. Too good for her own britches and uses others. She gets so rowdy that I wouldn’t be surprised if she gets banned from the bar. 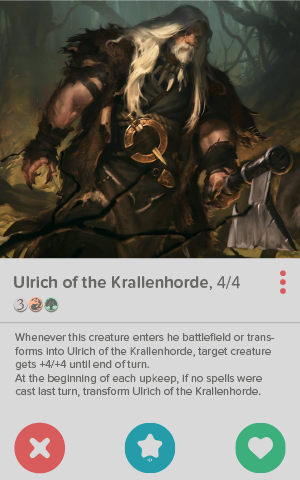 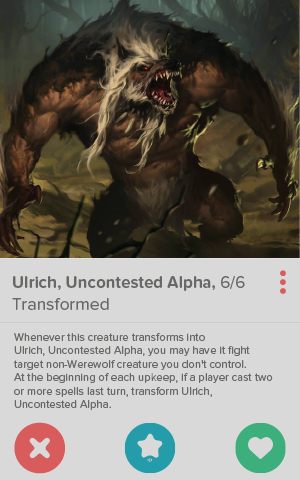 “Have me home before midnight.”

Michael Swipes Left: I’m just not into this card. R/G has a tough lot in Standard right now and I don’t think a pile of generic stats is going to push the color combination over the top. The numbers here are certainly good – in a similar sense to Wolfir Silverheart (which I think this literally is supposed to be thanks to Avacyn’s death happenings) – but even getting in four extra points of damage when Ulrich enters the battlefield is unlikely to stop him from being vulnerable to Archangel Avacyn the next turn in combat.

In matchups where fighting a creature is relevant, I expect his transformation to be close to lights-out, but is it reasonable to expect that to happen? I see an opponent exiling my Ulrich with Declaration in Stone a lot more often than the Uncontested Alpha running away with the game.

It wouldn’t shock me if I was wrong, because the numbers are here, but I don’t think this legendary Werewolf has a spot in the format right now.

Tom Swipes Left: Too much biting for my tastes. Probably snores like sawing logs too. I heard she beat up her last boyfriend because they stayed out too late. Says she’s worth the wait but I don’t believe her. 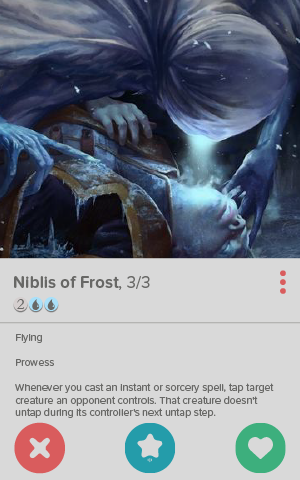 Michael Swipes Left: A younger and more eager me would probably be all about Niblis of Frost. The Spirit plays offense and defense naturally well just by casting spells and has good baseline stats. My issue is that these “protect the queen” cards tend to play poorly from behind and Standard doesn’t have an all-star supporting cast of cheap spells to enable such a strategy, such as when Delver of Secrets and Dungeon Geist were supported by Mana Leak, Ponder, and Vapor Snag.

Don’t get me wrong; this card is powerful but I think it requires being slotted into a more dedicated Spirits deck with Rattlechains. At that point your spell count is likely to be heavily diluted and it will be difficult to repeatedly trigger the Niblis’s “Ice” ability. As a result, Niblis will be a fine top-end aspect of the deck but isn’t likely to be the build-around-me powerhouse that it could have been in another time and place.

Tom Swipes Right: A cool chick. I don’t want to spook my chances with her by getting cold feet. I’d like to start our night in nibbling on appetizers and having a few spirits before prowling the blues clubs. 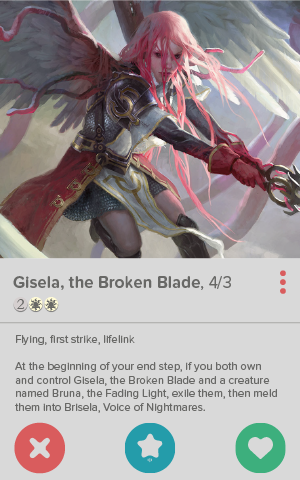 Michael Super Likes: I’ve been calling Gerry at all hours talking about the one that got away (at $20). I spent a whole week

This isn’t even beginning to discuss her meld ability. When the vast majority of powerful creatures in Standard are Humans and Angels, incorporating Bruna into your white midrange deck is hardly even an opportunity cost.

Tom Swipes Right: Definitely my kind of girl.As long as she keeps those tentacles to herself. Great initiative with a great link on life. Beautiful voice. Says she wants me to meet her friend “Bruno” or something… 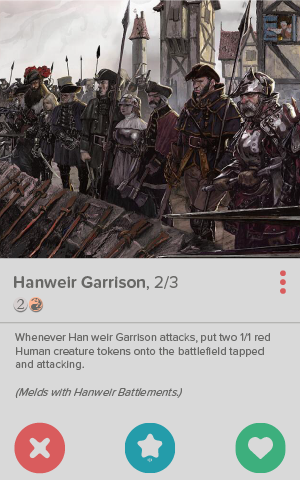 “We’re ready for anything!”

Michael Swipes Right: I’m much less excited about this than its land counterpart, but it’s a numbers game, right? Any “army in a can” is worth taking a hard look at, especially when we are incentivized to play Hanweir Battlements. Giving this card haste is exceptionally powerful, and of course the meld “backup” plan is a huge threat for your opponent.

That being said, I fear that this card might be a little too vulnerable to removal and that it doesn’t quite pass the Reflector Mage test. It doesn’t necessarily generate any value upon entering the battlefield and it can’t favorably attack into a 2/3 by itself, but I think this is a step in the right direction to getting red aggressive decks back on their feet.

I’m all about Hanweir Battlements, and it will be hard to justify excluding a few Garrisons in those decks as well.

Tom Swipes Right: I hear she likes to bring along friends. Well, the more the merrier. I think she’s someone I could really meld with. As long as she stays away from her ex-husband Battlements. He brings out the worst in her. 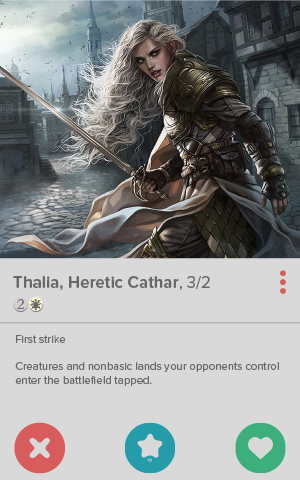 “Love is a battlefield.”

Michael Swipes Right: Thalia looks to be pretty incredible and is likely to be a multi-format staple. Her stats are excellent for Standard with its prevalence of three-toughness creatures and her abilities put a huge damper on Collected Company’s knack for catching its owner up on the battlefield.

Further, she will also just make it difficult for anyone playing it straight to block effectively – likely becoming a huge incentive for Boss Humans to play a few more lands and incorporate more top-end.

When we start to delve into Modern and Legacy, it would appear that Thalia is just going to be downright frustrating to play against. Any card that has an ability to hinder mana development is potentially very powerful, and there’s no reason to believe that the Heretic can’t be slotted into various Death and Taxes and other disruptive creature shells.

I only pray that I never have Evolving Wilds in my hand while staring her down this Standard season.

Tom Super Likes: The kind of girl I’d bring home to mother. Mother of Runes that is. Seems like a very loyal girl. Keeps the haters off. 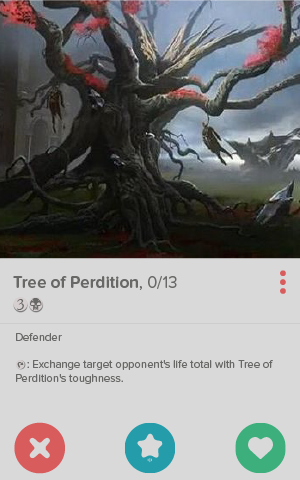 Michael Swipes Left for Playability, Swipes Right for Flavor: This card is definitely super cool and I like the idea of seeing the “flavor shifts” that Emrakul has on the denizens of Innistrad.

Of course, well-designed doesn’t necessarily mean Constructed-playable. Yes, I know there are probably some crazy combos like Tragic Slip and Twisted Image to one-shot your opponent with EXDEATH, but the reality is that this isn’t likely to happen.

One probably isn’t terribly interested in a large defender in their aggressive deck, and I suspect that Tree of Redemption will prove to be a better Constructed card despite its minimal play.

Tom Swipes Right: Whoa, not to sound sappy, but this one sure has some junk in the trunk. She looks like she needs some time to blossom. I don’t want to uproot her perdition and leave too fast. I just can’t be a stick in the mud either, else she might switch dates on me.