It’s worth noting that it helps that almost everyone’s playing creature decks, as four Fatal Push and four Grasp of Darkness is an enormous handicap against Torrential Gearhulk or other decks that don’t use small creatures.

Looking at the list, I’m really not sure what I’d want to change. If anything, I’d probably consider cutting some of the removal for Gifted Aetherborn, but I get that Bone Picker is at its best when you can always kill your opponent’s creature and cast it, and cards like Night Market lookout are really counting on you clearing out any opposing blockers.

As for Zac Caudillo’s Zombies, I think there’s a lot more room for exploration here. Part of that is simply the fact that you have a lot more options when you play more than one color, but also, it’s just not clear how aggressive Zombies should be.

When I last wrote about Zombies, Felidar Guardian hadn’t been banned, so it seemed like we’d need to go under it and avoid tapping out on their key turns, but without the threat of dying out of nowhere to a two-card combo, it’s possible that Zombies should be more of a midrange deck. We see elements of that in Zac’s deck with a playset of Diregraf Colossus, but I wonder if it’s better to push further. 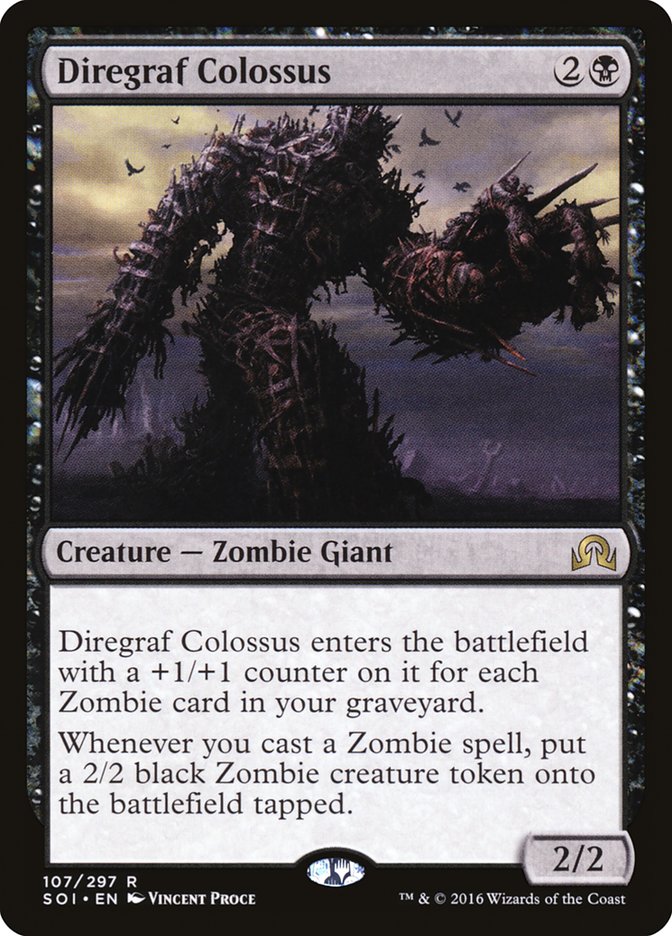 Maybe instead of thinking of this as an aggro deck with Zombies, it should be thought of as a midrange Zombie deck.

One card I didn’t include in my Zombie decks that felt weird to omit was Scrapheap Scrounger, but looking at Zac’s deck, I think it might be the wrong direction. Similarly, while I’d been excited about Plague Belcher, in a world of small aggro decks, I kind of just want to play to build a battlefield full of huge Zombies rather than keying in on one big attacker. I want a lot of removal to keep fliers in check, and then I want a lot of synergy-focused Zombies:

This deck is basically just trying to outclass other creature decks. You don’t need to prioritize creatures like Plague Belcher that look to end the game by themselves; instead, each of your creatures threatens to take over the game when combined with your other creatures as your battlefield becomes increasingly impenetrable.

This shifted approach is the kind of idea that I’m getting at when I suggest looking to explore midrange territory as an answer to a format that had been well-explored except for midrange decks, as those had been choked out of the format by a force that is no longer a concern.

Here’s another example of the kind of deck I’d be looking to explore, another deck that would have no chance against Felidar Guardian:

This is a traditional midrange Naya deck that’s just looking to cast a planeswalker or Tireless Tracker on turn 3 and compile value by stacking additional planeswalkers and flying monsters.

A very similar deck could be built with an eye for Delirium:

This deck doesn’t have any dedicated delirium enablers, just a good mix of card types. Traverse the Ulvenwald will often have to get a basic land, and Ishkanah, Grafwidow occasionally won’t make Spiders, but the flexibility adds a lot of late-game power to the deck, and the sideboard Angel package offers a forgotten way to go over the top, though it’s not recommended against opponents playing white, as Cast Out is an excellent answer to any of the angels, including Brisela, Voice of Nightmares (this plan would instead be used for going over the top of decks like B/G Delirium). 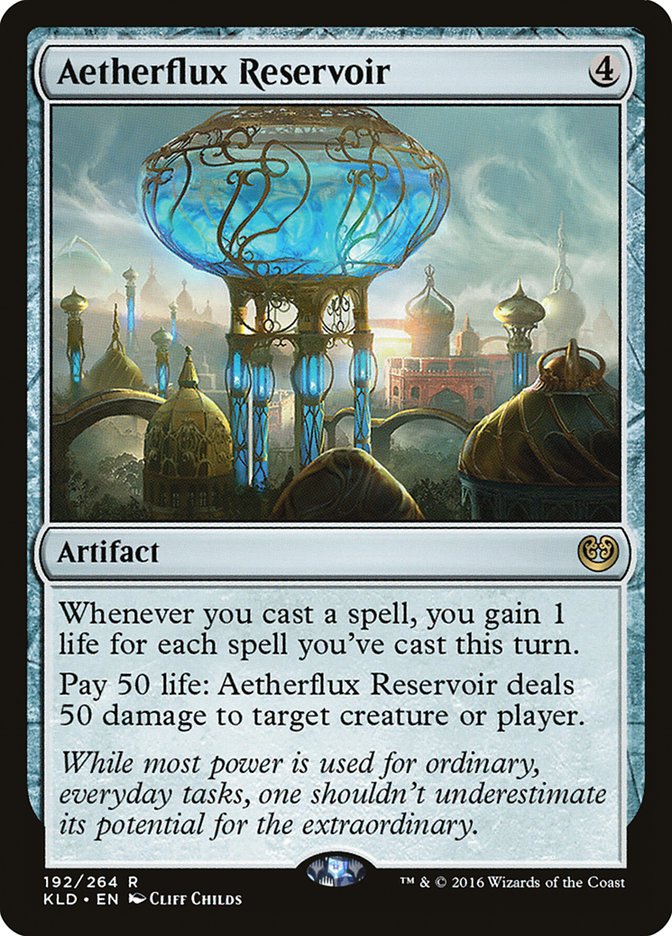 The other obvious space to explore is to look at the other combo decks in the format, like Aetherworks Marvel and Aetherflux Reservoir, which may have been invalidated by a faster and easier combo in Felidar Guardian with Saheeli Rai.

The trouble with exploring this direction is that these decks are traditionally weak against Mardu Vehicles. However, as combo falls out of the center stage and Mardu decks focus on beating each other by playing narrower cards like Fatal Push and sideboarding slow cards like planeswalkers over disruptive cards like Transgress the Mind, it’s possible that the right kind of combo deck could catch the format by surprise, especially if people find good ways to build midrange decks against Mardu, and Mardu’s further stretched to compete with those while they can’t compete with the combo decks that they’re simply too slow to interact with. (Respect for this possibility is the reason I’ve included Gideon’s Intervention in the sideboards of these Naya Midrange decks.)

In fact, we can actually see some of this already in the results from SCG Atlanta, as the Standard Classic was won by Sam Lowe with Bant Aetherworks, one of two Aetherworks Marvel decks in the Top 8 of that event, along with two other Top 16 finishes in the Standard Open from Temur Aetherworks.

Is all of this to say that I think things are hopeless for control players in this format? Absolutely not. Magma Spray is an absolute game-changer, and I think Commit//Memory may be one of the most underrated cards in Amonkhet, even recognizing that people know it’s good (it’s really good). 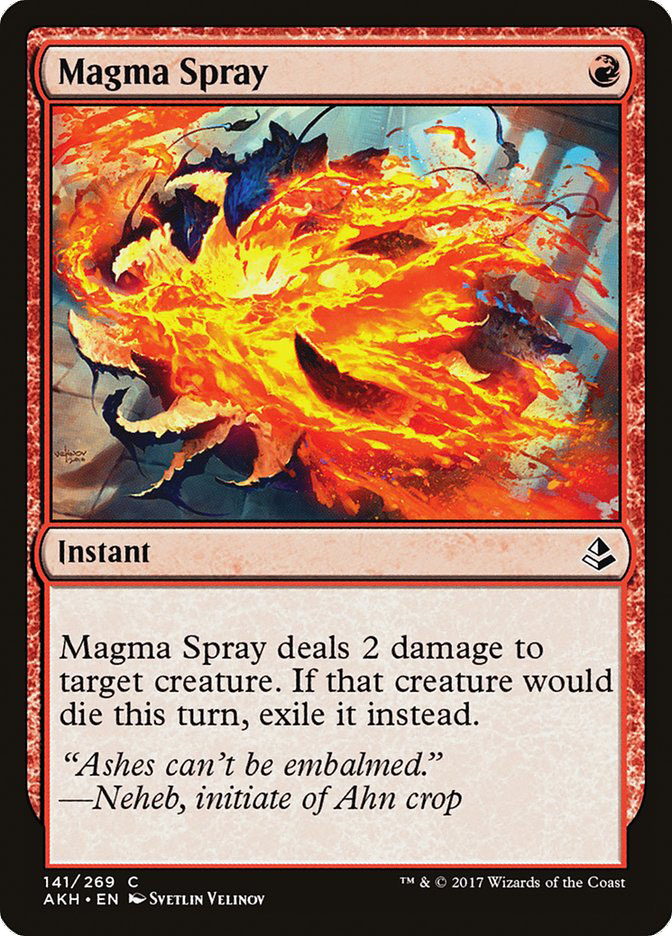 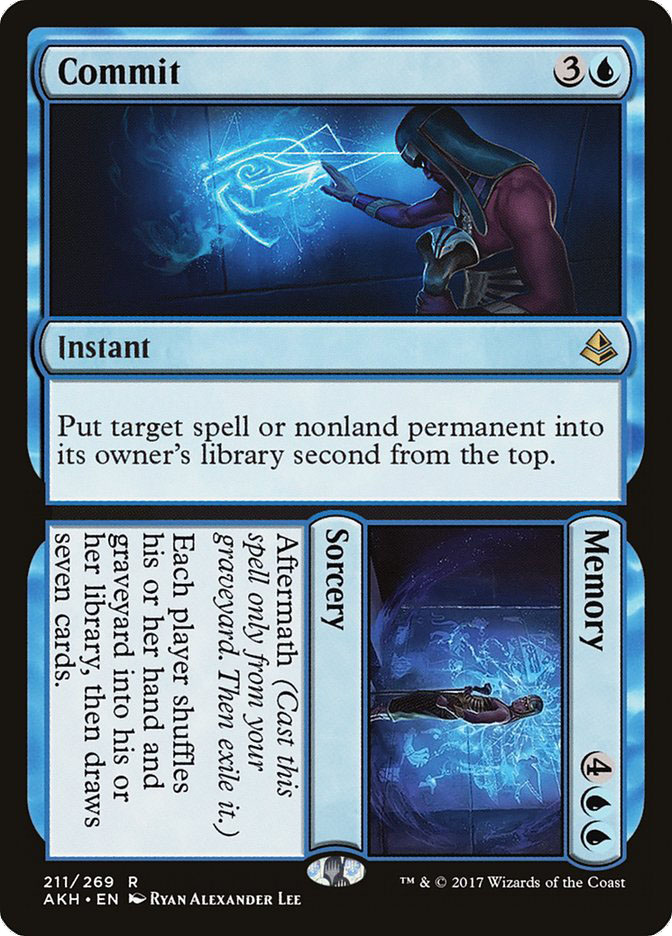 I mentioned that control has struggled with Mardu historically because Mardu attacks in so many different ways that it can be hard to stop all of them, but Magma Spray cuts off their recursion, Censor offers a robust counterspell, and Commit is about as close as you can get to Hero’s Downfall when an instant is required. I absolutely think giving blue a slightly expensive Hero’s Downfall with considerable upside and a broken rules interaction with their best card (Torrential Gearhulk) seems dangerous, and it’s easy to imagine a blue deck of some kind ultimately becoming the defining deck of this standard season.

A little all over the place? Absolutely, and that’s exactly what I’m hoping to see at the beginning of a Standard format. Ideally, my hope and expectation is that people start by finding ways to go bigger to beat Mardu and the other aggro decks, but those midrange decks never really take over because they’re kept in check by combo players who still struggle some with control and aggro decks, and then the format may or may not be taken over by an optimally built control deck, depending on just how good the best version of that deck ends up being and how narrow and exploitable the format becomes when the dust settles.

For now, I’m still hoping to find something fun and new, as I always do at the start of a new format, but I’m keeping my eye out for more reliable developments.