The State of the Format
Empirically, Vintage is a healthy format. By almost any quantifiable measure, the format’s thriving.

In terms of format diversity, Vintage is about as diverse as it has ever been. According to the Q2 results in 2010, we see the following:

In other words, there are many options with a legitimate chance to Top 8 or win tournaments with to choose from. 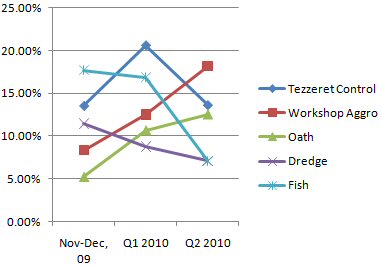 Anecdotally, the results of the 2010 Vintage Championship confirm this insight. The Top 8 featured:

Looking at trendline data, no single archetype has been the top performing archetype for two consecutive periods in the last 12 months:

This shows how Vintage is churning. It is evolving according to both the introduction of new cards (which have been quickly adopted in the last year) and metagame shifts.

From an engine-level perspective, things aren’t quite so rosy: 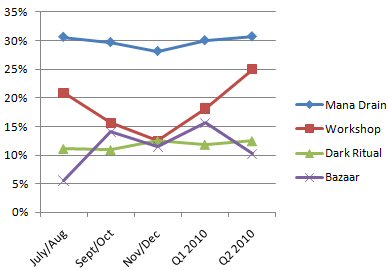 Mana Drain/blue based control decks, fifteen years after the invention of The Deck, are still top dog in the format —Â but they aren’t nearly as dominant as they were before the restriction of Thirst for Knowledge last year. Workshops, Dark Rituals, Bazaars, et cetera, each can (and have!) won many tournaments in the last year. 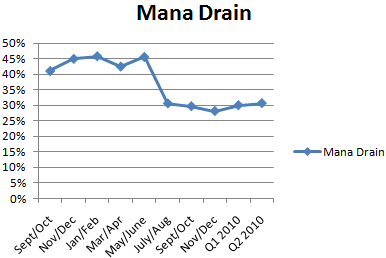 You can see exactly where Thirst was restricted, at the end of June 2009, and the effects of that restriction are now known. The restriction of Thirst has helped reign in Mana Drain’s dominance over the format. Mana Drain has remained remarkably stead at about 30% of all Vintage Top 8s.

Take a look at the ten most frequently played cards in Vintage Top 8s in the month of June:

What’s notable is that eight of the ten top most played cards in Vintage aren’t combo parts or broken spells like Ad Nauseam, but disruption! Vintage is a very interactive format!

Vintage is not a format of turn one kills. MYTH: BUSTED.

Moreover, I expect that those numbers will level off, particularly given the success of the Vintage Championships anti-Workshop Tezzeret lists, and the increasing prevalence of both Nature’s Claim and Trygon Predator.

Jace, The Mind Sculptor
The buzz coming out of the Vintage Championships was whether Jace should be restricted. The argument in favor of its restriction goes something like this:

a) There were six Jaces in the Vintage Championship finals.
b) Jace is basically as good as Fact or Fiction or Gifts Ungiven, both of which are restricted.
c) It’s a 4cc blue spell that pretty much wins the game when it resolves.

When looking at the August stats so far, Jace has made a huge impact, appearing in nineteen of the forty-eight decks that have registered a Top 8 appearances, or about 40%.

That seems like a pretty compelling argument in favor of restriction. I have to concede that Jace is probably better than Fact or Fiction. On the other hand, I don’t think it’s nearly as powerful as Gifts Ungiven. That said, people are cutting Gifts for Jace. I think that’s more a consequence of the ways in which Jace changes your deck than a statement about the relative power levels of those cards, however. Some people feel that it’s just a matter of time.

On the other hand, the reasons not to restrict Jace are more compelling. First of all, Jace didn’t even make it into the top 50 most played cards in Vintage Top 8s in the month of July. That means that Jace is largely a Johnny-come-lately into the format. The format hasn’t yet had time to adjust. The list of cards that can deal with Jace is very long; Black, Blue, and Red each have excellent ways of answering it (e.g. Red Elemental Blast, Lightning Bolt, Duress, Thoughtseize, etc). Almost every deck in the format runs at least one of those colors. Let’s give the format a chance to incorporate those answers.

Finally, I ran a poll on the Mana Drain.com asking people if Jace should be restricted. The results of the poll are:

Clearly, most people feel that Jace should not be restricted, and the second largest number think it’s simply too early to tell. The people don’t want it.

Dark Confidant
The more intriguing alternative is Dark Confidant. Dark Confidant has become the replacement to Thirst For Knowledge as Tezzeret’s primary draw engine. It’s simply the most efficient card drawing engine left in the format… And it was in both Hiromichi Itou and Owen Turtenwald 2009 and 2010 Vintage Championship decklist.

The argument for restricting Dark Confidant is largely numerical. In July, Dark Confidant was the 8th most-played card in Vintage Top 8s, appearing in 28.75% of Top 8s. That’s not quite Thirst numbers, but that’s not bad. In addition, Dark Confidant makes Jace stronger, by both protecting it and from the fact that Jace powers up Bob, making it less likely that Bob will flip a big mana card.

On the other hand, Dark Confidant isn’t always that great. Lodestone Golem punishes people for playing Bob. And its May and June numbers aren’t that great, since Lodestone Golem saw much more play than Bob in either month. What turned the tide was the use of Nature’s Claim, which can also give you an emergency life boost. Dark Confidant also struggles against cards like Oath of Druids or Darkblast.

I don’t think anything needs to be restricted in Vintage, or should be. The format is healthy, and there are plenty of ways that the format can adjust, and has, to these threats. However, there are a few cards that could come off of the Restricted list.

The standard for unrestriction is same as it is for restriction, but inverted: will a card dominate the format, reduce format diversity, or otherwise make the format less fun? If we can confidently answer both questions in the negative, then I don’t think such a card should be restricted.

Both the M10 Rules changes and the legalization of Grim Tutor (and Imperial Seal) from portal have made Burning Wish significantly weaker. With the density of Tutors now allowed, no one in their right mind would put cards like Yawgmoth’s Will into their sideboard. M10 also makes the wishes significantly weaker, since they can no longer retrieve cards that have been removed from game in the course of play. Thus, more abusive actions such as playing Yawgmoth’s Will more than once per game are no longer possible.

Applying the standard of “whether a card would promote diversity or create a dominant deck,” I can’t possibly see how Burning Wish could contribute to a dominant deck. Combo decks have far more efficient options, and Burning Wish is probably not an option for other archetypes that other decks can’t combat. If anything, I imagine that it would contribute to the diversity of the format by enabling decks like Belcher to have more options and greater consistency.

Scanning through Vintage databases, Frantic Search sees eclectic and infrequent play as a singleton. It will sometimes show up in Oath decks (where it’s worse than See Beyond); in Sensei, Sensei, a blue based control deck built around Sensei’s Top/Future Sight/Helm of Awakening; Drain Tendrils; and in a few storm decks as a singleton.

It’s my opinion that Frantic Search would not produce a dominant deck. One of the elements that made Thirst For Knowledge so good was the generation of card advantage. Frantic Search is card disadvantage. The tempo is huge, but it’s not good enough in most blue based control decks, even with Goblin Welders.

The real potential for Frantic Search would be in “Almost Blue,” a European-based storm deck:

This deck might enjoy playing with more than one Frantic Search, especially since it can fuel Brain Freezes and Mind’s Desire. But do think that with unrestricted Frantic Search, this deck would be too good?

Gush
While I think that Burning Wish and Frantic Search are by far the safest cards that can be peeled off of the Restricted list, there are a number of cards that can be used to promote format diversity because they are more likely to see play. Burning Wish and Frantic Search won’t create a dominant deck because they are only marginally playable, and therefore satisfy the criteria for unrestriction as a matter of course.

I do not believe that unrestricting Gush would create a dominant deck. With Brainstorm, Merchant Scroll, and Ponder all restricted, the Gush-Bond engine remains dead and buried… but a Gush-based Aggro-Control decks could be viable.

The best reason to unrestrict Gush, though, is that it would provide an alternative to Jace decks in blue. Gush and Jace are not very synergistic, and thus unlikely to be maximally abused in same deck. With the rise of Jace control, Gush is a more and more attractive unrestriction. Gush could be the building block of an anti-Jace blue deck, like this one:

This deck would be playable. It would have a very good game against the Jace decks (despite the fact that Dryad getting bounced is bad). Between the six to eight Duress effects it could run and the Spell Pierces, Jace is not gonna resolve.

On the other hand, this would struggle against the new Lodestone Golem decks. So unrestricting Gush would promote format diversity without creating a dominant deck.

Conclusion
Because the format is so healthy, there is a good argument to be made for doing nothing. If it ain’t broke, why fix it? Well, for one thing, doing something would send the message that the DCI actually pays attention to the format, and cares about it. I think many Vintage players had expectations that the DCI would unrestrict something based upon the pattern of the previous three years. There are a few cards that can be safely unrestricted, and should be.