Ever since I was a kid, my dad has

taken my sister and me to the woods for walks. Although I found this non-video-game marginally interesting at first, it’s grown to become one of my
favorite pastimes, and my father and I try to enjoy hikes locally and abroad whenever we can.

Several years ago, Padre and I were in New Mexico walking through Petroglyph National Monument, a rocky, cliff-lined park west of Albuquerque. The
rocks and cliffs are occasionally inscribed with rock drawings made my people who’d lived or passed through here hundreds of years ago, and this thrilled
me, much to my father’s approval. I had no problem departing the path and bounding amongst the boulders and loose earth to get a better picture of those
rock drawings that were only just barely visible from the trail.

As I climbed up one particular pile of scree, I aimed my camera at a great artistic specimen before hearing something so distinct that I still remember to
this day.

That, friends, is the best onomatopoeia I can use to render the sound of a rattlesnake.

Not only had I inadvertently stepped about a foot away from a rattler, it had reared back and was rattling its tail at me. Before my conscious mind
realized what was happening, a cold, icy shot of tingling fear swept through my body, and I involuntarily lunged backwards down the path I took in big,
clumsy steps. My chest hurt, my palms were sweaty, and my mouth was as dry as the desert, and the thing didn’t even bite me.

If you’ve ever encountered a snake in the wild, you might have had a similar reaction. There’s something evolutionarily engrained in our mind to fear
snakes; both the speed of their bite and the venom contained within it are a reason for concern. The physiological reaction you have when you see a snake
in the wild is unique. No glass, no protection. It’s like staring at a loaded gun that’s pointed straight at you.

My father says he’s never seen me move faster in my life, which I’m not sure was a thinly-veiled commentary on my life or an impressed evaluation, but it
made it clear to me that if we fear something, we act differently. Since then, I’ve encountered snakes on other adventures in the wilderness, and my
reaction is a bit more metered, but the physical response is still quite similar.

This leads me to my first deck, based around an unlikely target. 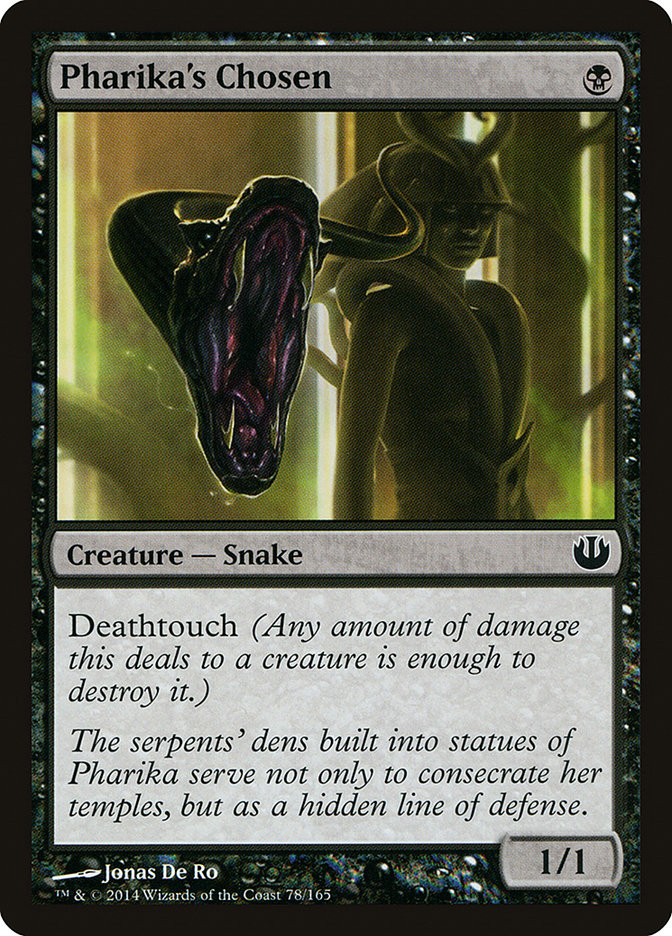 Typhoid Rats? What’s so special about a 1/1 with deathtouch? For me, I like the fact that it trades with almost every ground-pounder it touches.

In a time when creatures are getting larger and larger, the ability to block and strike any of them down is pretty exciting, but I chose this deck today
because of the continued support deathtouch has gotten in previous sets. From an attacker’s perspective, attacking into deathtouch creatures never feels
good, and unless you’re certain you can get more through than gets killed in combat, you might just wait.

Let’s grab some deathtouch critters and build us a list!

Sixteen creatures have deathtouch built in, and five others can apply it to themselves or create deathtouch creatures, in the case of Pharika, God of
Affliction. Reaper of the Wilds gives you two scry effects each time a deathtouch creature trades off. Athreos, God of Passage offers you an opportunity to
trade off indefinitely (or, more likely, your opponent will just Lava Spike him- or herself). Deadly Recluse provides critical protection against flying
creatures, which would otherwise have a heyday with a deck like this. Reaper of the Wilds is brutish enough it can block a lot of creatures without
deathtouch, or it can start attacking once the field is clear.

When it comes to slinging non-creature spells, this deck offers several synergetic options. Three Underworld Connections not only help keep me stocked with
more deathtouch creatures, it also provides two devotion to activate either God. Orzhov Charm appears after a long hiatus from Standard; although it can
kill any targetable creature outright, it also has the power to reanimate a Wasteland Viper or Pharika’s Chosen in combat to more efficiently deal with the
problem. Golgari Charm lets you save your team from combat, preserving their deathtouch effect for another round, or it can prevent a Supreme Verdict or
Anger of the Gods from scorching your team. Dictate of Erebos also lets you trade two creatures for one, and even a partial attack can knock out their
whole team.

Collective Blessing is the win condition. It looks a little strange, but if you’ve got half a dozen Pharika tokens and you resolve this, you can kill them
on the spot. Although Dictate of Heliod is nice as a flash anthem, it’s lower-powered and the double white is harder for me to hit. The double green also
provides nice devotion for Pharika, giving her a chance to see red zone action. Ready // Willing, while expensive, is also a great opportunity to blow your
opponent out. Lifelink is pretty awesome when a God is involved, giving you double-digit life in a pinch.

The lack of Mutavaults is intentional; if you’re planning to keep a ground team at bay, that doesn’t leave much opportunity for you to push a 2/2 through.
It will never block or attack as well as any other creature in the deck (deathtouch provides semi-evasion.)

I’m going to leave the sideboarding up to you; there are only so many deathtouch creatures in the format, so it’s possible the sideboarding involves
including cards that deathtouch blockers can’t answer. Maybe Plummet, extra removal spells, Vraska the Unseen, or big midrange guys like Obzedat, Ghost
Council should join in?

Besides the sideboard, there were other considerations that could have made the cut, but I left out for the sake of consistency. Archetype of Courage, for
example, makes all of your deathtouchers impregnable killing machines, but the WW cost is tough without a mana rework. Setessan Tactics is an interesting
choice, too, but this will often end in all things dead, not just their things dead. What would you all suggest?

My second deck is not as flavorful as a deck with swarms of poisonous creature, but it is themed nonetheless. 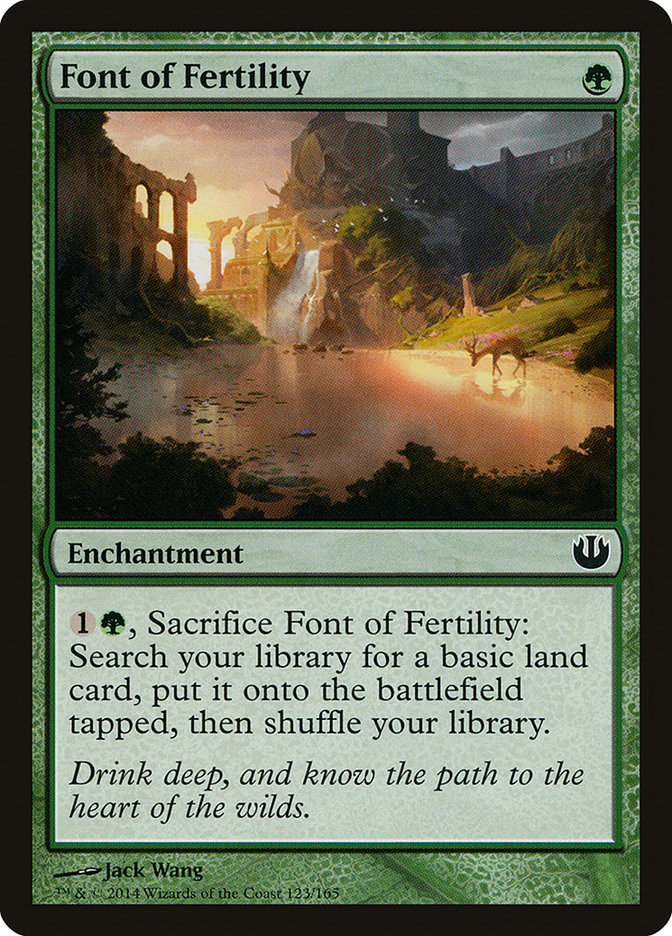 This is an instant Rampant Growth. One of the downsides of Farseek, Into the North, or any other two-mana ramp spell is that it sacrifices your turn to
accelerate and/or fix your mana. Font of Fertility, if resolved on Turn 1, does exactly what Rampant Growth does, but it lets you keep your mana available
if you need to do something with it in the meantime.

Thinking about Font of Fertility in this way helped me wander towards what you can do with two mana instantly, then three mana, then four. Before long, I
had crafted a deck that entirely functioned on your opponent’s turn. Flash decks have existed in the past, but rarely in these colors. Could there be
enough powerful spells to make something like this relevant?

Every spell but Font of Fertility can be cast at instant speed. If we can hold them off with counter and burn, we can push our own creatures through with
protection. Let’s unpack it a little bit.

Even when we’re contributing to the board, it’s only after we’ve seen all their sorcery-speed spells. Boon Satyr is arguably the most versatile flash spell
in Standard, creating a relevant power creature for three mana or pushing another creature over the top for five mana. Either one is an option here; if
they haven’t resolved anything on Turns 1 and 2, slam this out and start beating down. Once you’re ready to go for the kill, resolve one copy and bestow
another for a surprise eight damage. It’s all possible with the Satyr.

Horizon Chimera also pairs well with the Satyr; its innocuous Trample becomes much better when it can go toe-to-toe with a Desecration Demon and still push
damage through. Notion Thief, which works independently of or in tandem with Dictate of Kruphix, is a great card-stealer which can also beat down
reasonably on an empty board. The plan is, regardless of the turn, you can stick creatures if your opponent does nothing relevant.

The deck is full of non-creature spells. While this is a control deck, we’re still relying completely on spells (not Planeswalkers) to do the work. The
deck sports nine counterspells. Dissolve is an efficient, answer-anything counter that you can often resolve on curve and improve your draw. Essence
Scatter is ahead of the curve, letting you counter anything with a beating heart. Mystic Genesis is more strategic; use it to snag your opponent’s
five-drop or critical X spell to get maximum value.

Six spells directly kill creatures. Hero’s Downfall, Abrupt Decay, and Silence the Believers will all have targets regardless of the deck you’re fighting.
The bounce spells also have a role to play. Far // Away still pulls its weight in decks like this.

Then there’s what’s left. I’ve played at least one copy of each on-color Dictate to try them out. Dictate of Kruphix, along with Notion Thief, can always
keep my hand thoroughly stocked. Fated Intervention, like Mystic Genesis, adds six power to the board instantaneously. Just watch out for Bile Blight!

I have had the opportunity to test this deck fairly regularly. Mana is perhaps its largest challenge, but Mana Confluence is not the solution, at least not
in towering amounts. Two seems to be correct, and the mana requirements are too intense to allow for a Mutavault or two to slip in. Thankfully, Font of
Fertility can search for any color. However, I frequently find myself in need of two new colors, e.g. two Forest and an Overgrown Tomb in play
with two Dissolves in hand. The spell suite may be too color-hungry to spread the mana like this, and it’s cost me a couple test games. More Fonts or a
change in color count might help.

Negate is a great tag-in for Essence Scatter when you find your opponent’s deck to be a bit creature-light. Bile Blight and two extra Abrupt Decays
constitute this deck’s answer to early aggression. Bile Blight hacks away Burning-Tree Emissary and Boros Reckoner, while Abrupt Decay answers those as
well as Brimaz, King of Oreskos and Loxodon Smiter. Golgari Charm can also sweep away X/1s (mind your Notion Thief) or it can pick off the myriad non-God
enchantments I expect to see floating around. Unlike in the last deck, I rarely expect anyone to use Golgari Charm to regenerate. An extra copy of Essence
Scatter helps you prepare for their three-drop, and Dispel and Hero’s Downfall #4 can help you in particular matchups. I’ve included a third copy of Notion
Thief for those Sphinx’s Revelation and Underworld Connections matchups that crumble by only using their draw step.

In testing, this deck was hit or miss. I feel like my number are certainly incorrect, and I might be too obsessed with the “flash” theme. My win conditions
might be too easily answered, and I might not be fast enough against aggro, especially pre-board. I think there’s potential, and it is a very fun deck,
providing options for almost every situation.

Maybe you miss the days of Restoration Angel and Faeries and want to advance your board at your opponent’s end step. If so, what would you change to make
this deck a viable shell? Is there anything here?