This process can be dramatically different based on which stage of testing you are in. As far as the big picture, your 75-card deck in its entirety is your resource for any given tournament. It should go without saying that, barring some extreme pairings, you should be utilizing every part of your 75.

The initial construction of a sideboard largely has to do with what cards you want to remove from your maindeck, not what you want to add from your sideboard. If you’ve ever found yourself in a situation where you have six cards to add in a matchup but only five cards you want to remove, you haven’t done your homework. Perhaps it is still better to remove an additional maindeck card for that sixth sideboard card while in the tournament, but it is possible that you could have netted additional percentage points in the field by utilizing that slot elsewhere.

To some extent, it might appear like I’m ironically advocating that you build your own personal sideboard guide. Well, that’s true, at least to begin with. 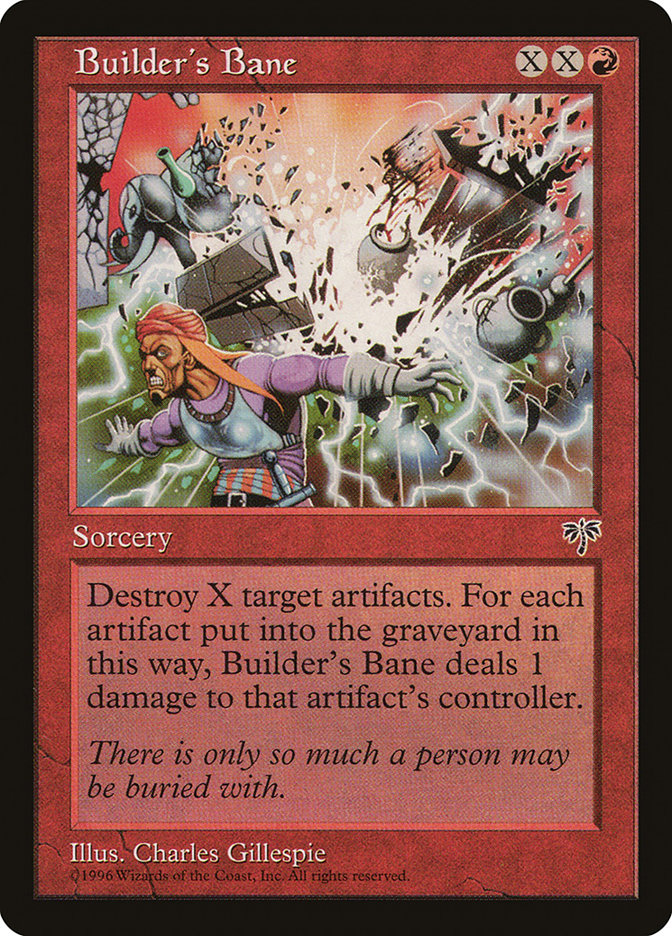 It is also important to note that certain realities about matchups and the numbers of cards you are able to remove might reveal that your maindeck is built incorrectly or that you might be interested in positioning it differently based upon a perceived metagame or desire to strengthen a matchup. Don’t be prone to being stubborn about adjusting slots within your 60 as well if they have a cascade effect on the overall strength of your 75.

I do want to acknowledge that I’m being quite general because Magic is so dynamic, not only within formats but also on a week-to-week basis. Having a strong process is a far more valuable testing tool than any kind of specific information on a singular deck or matchup.

Once you understand what you need to achieve in a certain matchup and have made some baseline assumptions about what is effective or not, how do you properly build a cohesive post-sideboard deck?

One of the bigger pitfalls I see in sideboarding is that players just want to bring in a bunch of “good cards.” We’ve already talked about it, but the most important thing to do during sideboarding is being able to properly respond to the best card your opponent can play as consistently as possible while still executing your own gameplan.

To this end, it’s going to be impossible to simply have a stack of powerful and expensive “breakers.” Many opponents’ common sideboard cards tend to be good at answering these game-winners (Negate comes to mind), and should one ever stumble or can’t keep up, then it doesn’t matter if you still have a bunch of powerful cards left over if you can’t deploy them.

When you remove cards from your deck, you want to maintain a structurally similar curve or make fundamental changes to your deck to support the removed cards. 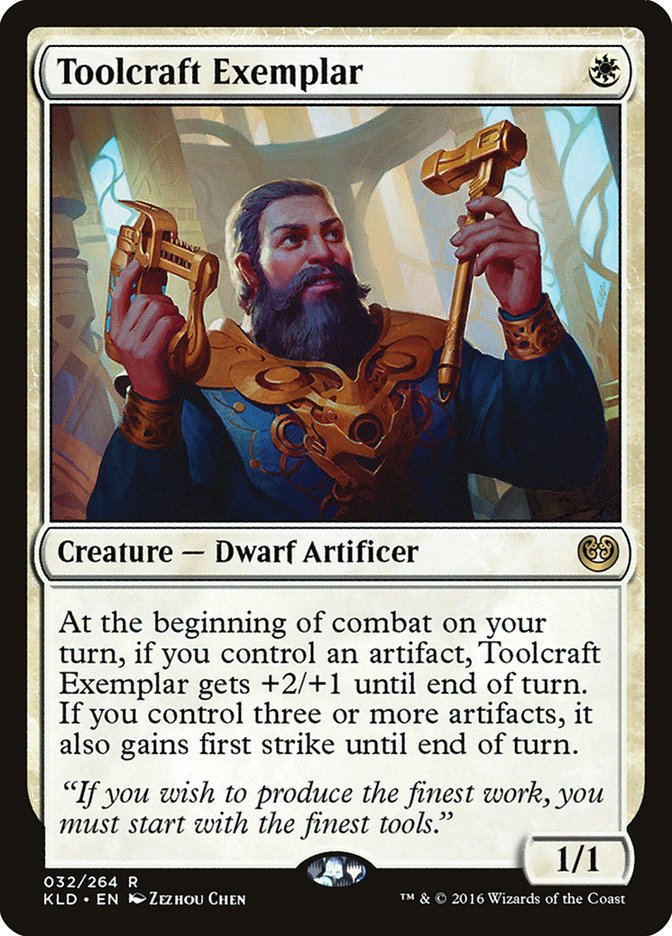 For example, if I am removing Toolcraft Exemplar from my Mardu Vehicles deck in anticipation of going larger with Fumigate, then I also want to supplement this strategy with cheap interaction to play early against my opponent’s strategy.

If I am dramatically increasing my curve in this way in one of the most popular matchups, perhaps I want to consider either adding another land to my maindeck or including it in my sideboard. Remember that your 75 is a fluid tool and that you play the majority of games post-sideboard. Should you have a variety of mana sinks and means to use extra mana, then playing an “extra” land because of your sideboard is a perfectly viable strategy.

In a more extreme case like Mardu Vehicles, you might just want to put it in the sideboard. The stigma of “wasting” a slot in this manner is just so ridiculous to me. If you are including a card that supports your plan, then it is more than pulling its weight! 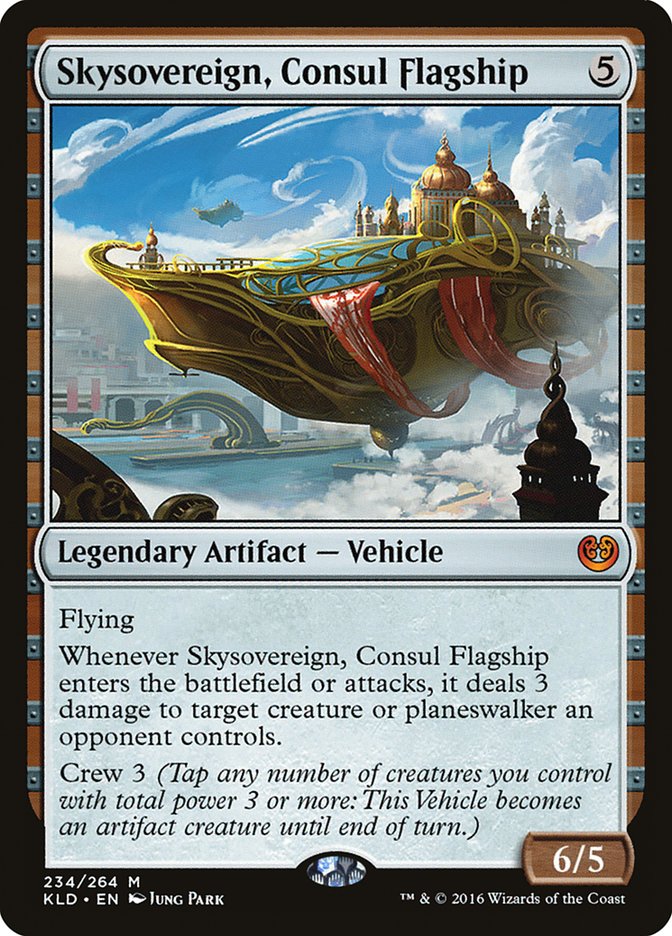 Powerful cards like Fumigate; Skysovereign, Consul Flagship; Archangel Avacyn; and various planeswalkers are often elements of effective sideboard strategies, but they have to be supported by a cohesive deck that can enable these cards to take over.

While this has a lot to do with “crunching the numbers,” it is yet another common snare I see folks stumble into. Presumably you’ll be able to figure this out in the testing process, but should you just be picking up a deck or if you’re still in those initial stages, then a good thing to remember is that you still want your deck to function properly.

Going back to our Mardu Vehicles example, if we are interested in removing Toolcraft Exemplar from our deck, we still need ways to support crewing Heart of Kiran. If we have too few high-power aggressive elements or minimal planeswalkers, then the Vehicle is no longer effective. Our deck has been too heavily diluted without being properly adjusted.

On the flip side, another common mistake is to be too locked into answering specific permanents. Yes, perhaps it is a good idea to sideboard in a copy or two of Natural Obsolescence or Release the Gremlins against Mardu Vehicles; they are clean, efficient, and potentially even high-impact answers to troublesome cards. However, if we go too crazy with these narrow answers, how are we ever going to beat a turn 4 Gideon?

Finally, combo decks tend to let this issue shine the brightest. Whereas in most situations we have to ask ourselves what the worst cards are in a matchup, combo decks are answering the question, “How many cards can I remove while still functioning?”

Be prepared to adjust accordingly.

I see players adjust far too little in sideboarding to whether they are on the play or the draw. Of all the cards in Magic, planeswalkers have the highest increased impact with being on the play. Devise plans to just kill your opponent with your Gideon and Saheeli Rai if you’re going first.

By extension, planeswalkers are the cards that you should be most afraid of on the draw. Plans that involve being able to quickly double-spell to catch up and build battlefield presence so that these powerful permanents can’t quickly take a stranglehold on the game are of utmost importance. 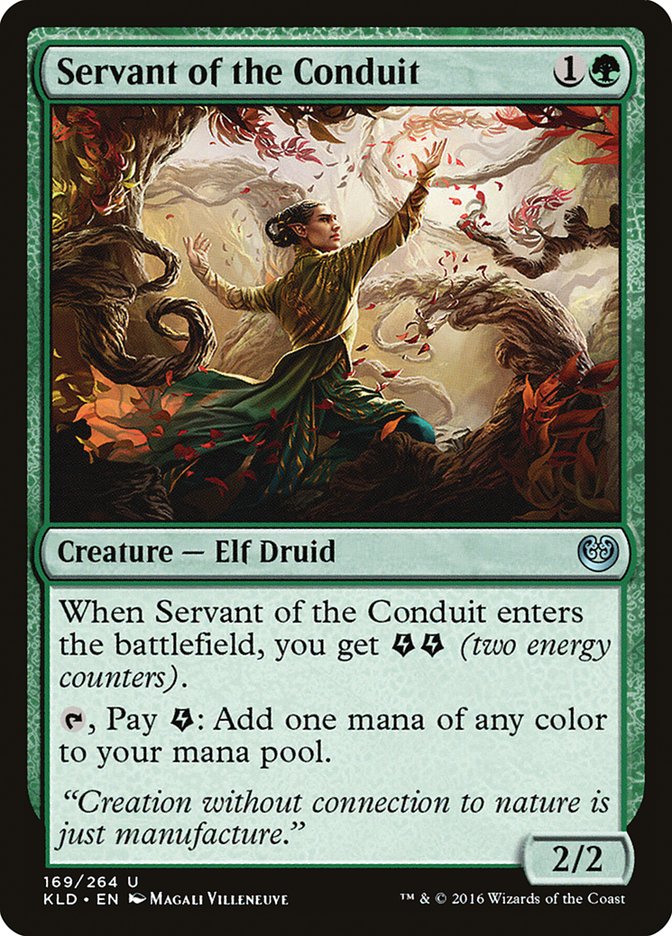 “Breaking serve” is one of the best things one can possibly do on the draw and is why cheap interaction is so powerful. On the play, Fatal Push isn’t effective, as it unlikely to tag an opposing one-drop, but on the draw, if you can kill an opponent’s Servant of the Conduit and then untap into a two-drop to their empty battlefield, you have effectively “stolen the play.”

This is a topic that is often heavily associated with Modern, but what are the roles of hate cards in sideboards? It’s tough. In Modern specifically there is such a broad number of matchups that it is significantly harder to break down every single play pattern – there are simply too many. As a result, it is often best to address the worst matchups your deck faces, if possible, by hammering them with a few “A+” cards from the sideboard. 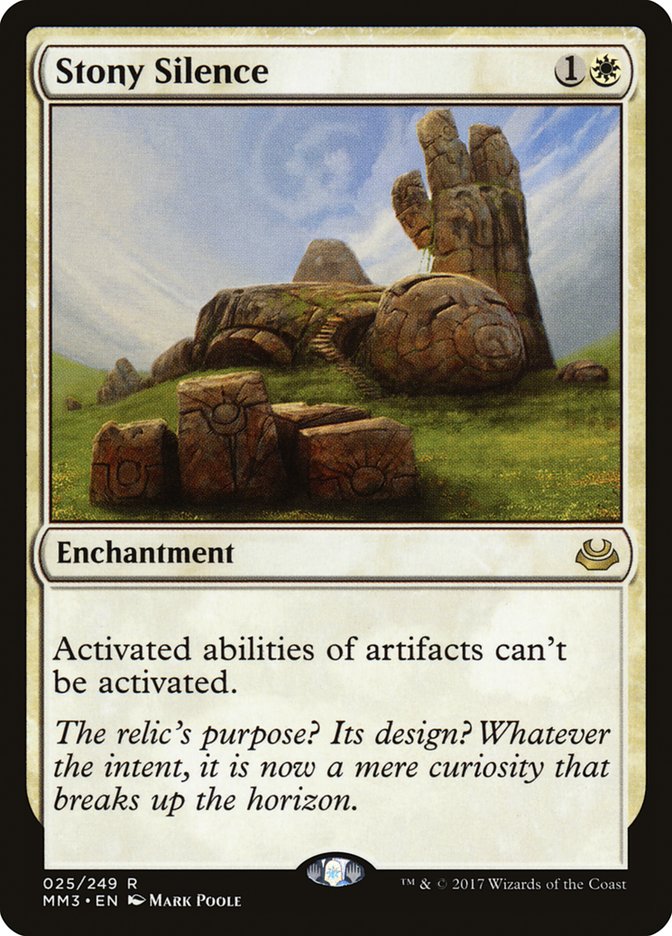 Stony Silence tends to be the marquee card of this discussion.

For less extreme circumstances, a severely underrated aspect of building sideboards is including some number of “catch-alls.”

These “B” cards are going to make a much smaller impact than the Stony Silences of the world, but being prepared to fight a number of different strange strategies by including cards like Disenchant effects, counterspells, Engineered Explosives, and Oblivion Ring goes a long way towards insulating you against the unexpected while hopefully serving as good generic answers against a wide swath of expected matchups.

Playing the Opponent and Being Flexible

This is another concept that comes up far more in formats like Modern and Legacy than Standard, due to how the last is a bit more rigid in terms of common play patterns. With less play at “instant speed,” it becomes more difficult to adjust the cards in your deck based on whether an opponent chooses to play around them frequently. 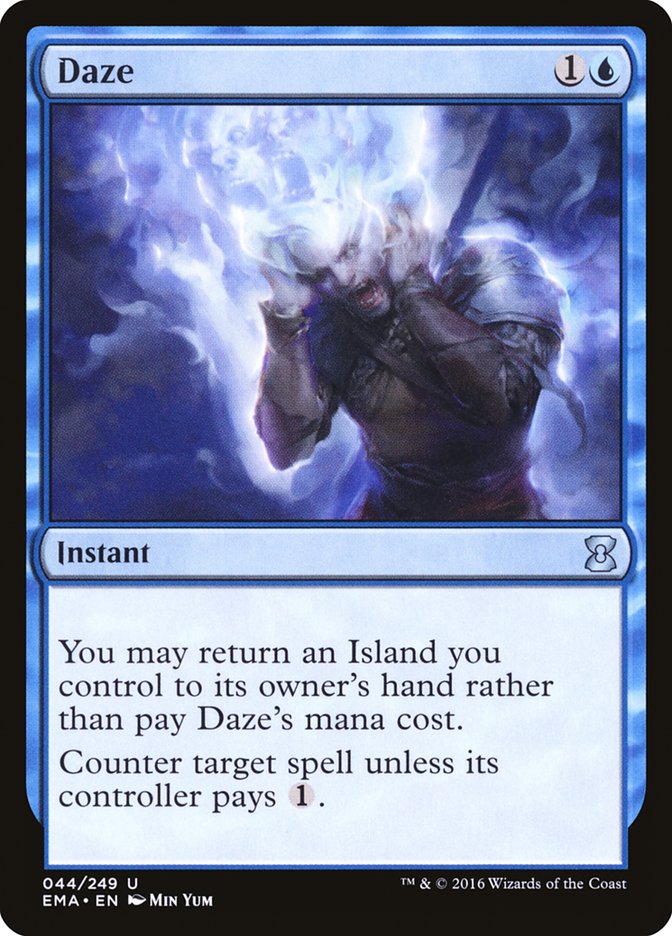 Daze is the most obvious example for me, as I probably keep it in my Delver decks in Legacy in some number in almost every matchup unless my opponent is incredibly disciplined in choosing to navigate around it. To some extent, I also lean towards keeping in cards like Daze in unconventional spots, like on the draw, because it is common wisdom that you “should” remove it.

Looking for opportunities for large swings in tempo or shifts in battlefield presence is the key here. If your opponent is prone to tapping out, Daze is great because it is “free.” An opponent that tends to jam their Saheeli combo or throw caution to the wind when there could be a potential sweeper deserves an adjustment in sideboarding.

Ultimately, it tends to come down to how aggressively an opponent plays and their respect for the range of cards in your deck. Always take note of how they seem to be approaching the matchup before choosing to present in between games.

Sideboarding is on some level a science and an art. Building your deck properly to take a certain stance in each stage of a perceived matchup is a matter of having a refined process and an acute understanding of how to position yourself.

On the other hand, actually executing in each game of a tournament is combining this front-end work with the ability to adjust on the fly to your opponent’s deck, style of play, and being on the play or draw.

A sideboard guide doesn’t reflect this.

While I’ve covered a lot of broad-strokes concepts, I hope that my ideas and approach will help you better refine your own process for building decks and tackling your sideboard in preparation for tournaments.