If this were only a screed about how “Slivers have changed and now I don’t like them,” I wouldn’t have bothered writing it. Instead I’ll be looking at the history of these little beasties, how they’ve changed over each incarnation, and what justifications there are for the Magic 2014 versions—at least what’s been released publicly. Mark Rosewater history of Sliver design (up to 2004, when he wrote it) is essential reading for the mechanical side; with my Vorthos proclivities, I’ll be looking more at the creative end.

In the Beginning: Tempest Block

More specifically, that’s Tempest and Stronghold because there are no Slivers in Exodus. A hive mind under one Sliver Queen (who herself is being manipulated by Phyrexian-aligned baddie Volrath), the first Slivers are of unknown origin but first are seen on the artificial plane of Rath, which the Phyrexians used to launch their invasion (or should that be Invasion?) of storyline-central plane Dominaria. As a hive mind, the Slivers of Tempest Block are one-for-all and all-for-one, except for the Volrath-created Metallic Sliver which only takes and takes. It’s worth noting that the monocolored and colorless Slivers all appear in Tempest. 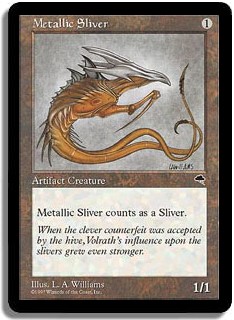 In an alternate timeline where the Metallic Sliver is found out, the Sliver Queen leads the rest in a rousing rendition of “Grenade.”

As noted on the Wikipedia page most hated by Wikipedia’s own editors (a half-dozen issues and counting!) when the Planar Overlay happened, the Stronghold with all its Slivers landed in the middle of a dormant volcano. The Dominarians made the volcano go boom, and the Slivers went boom with it. End of story.

Just kidding. Slivers were way too popular to let go completely. Comic book death it was.

When volcano went boom, apparently some Sliver remains landed on Dominaria’s “distant continent” Otaria, the setting of Odyssey and Onslaught blocks. Among the pit-fighters and dementia summoners and an order that calls itself the Order, there’s a gathering of wizards called the Riptide Project. These Riptide Project researchers and manipulators found themselves some fossilized Slivers, and what would any self-respecting group assembled after 1990 do with those remains? That’s right. They went Jurassic Park on them. 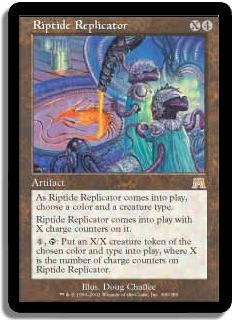 Not pictured: the genre-savvy Fugitive Wizard who took a permanent vacation.

So what happened next? I’ll let the cards tell the story: 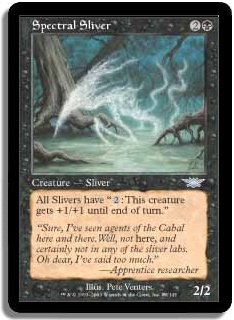 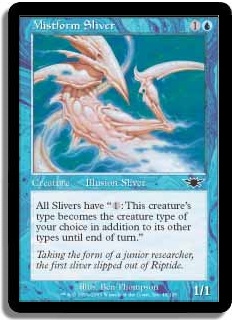 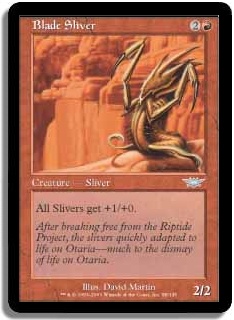 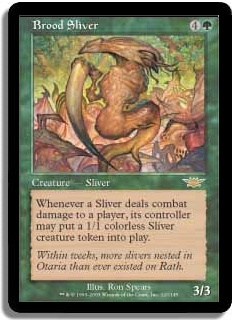 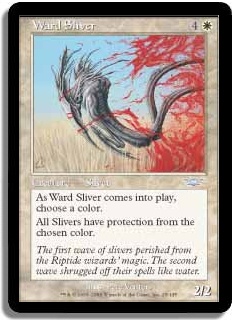 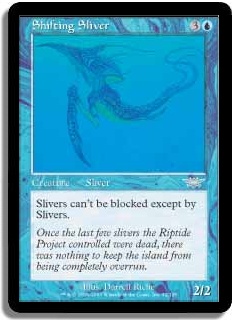 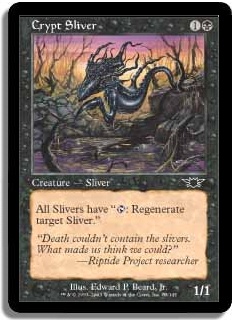 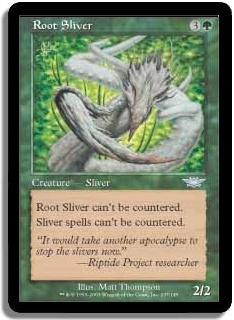 It’s worth noting that there are seventeen total Slivers in both Tempest block and Onslaught block. (Mistform Ultimus is a Sliver. Remember when it was special? Yeah, so does it, and it wants its specialness back. It’s looking at Lorwyn and thinking “Forget You.”) In both cases, the Slivers appear only in two sets out of three; where Tempest block started with Slivers and ended Sliver-free, Onslaught block began Sliver-free, brought the bulk of its Slivers in Legions—the first all-creatures, all-the-time set—finishing with a solo turn by Sliver Overlord.

The Slivers of Onslaught block generally were higher on the mana curve and not so powerful relative to their environment as their Tempest block counterparts; aside from Sliver Queen, none of the Tempest block Slivers had a converted mana cost higher than three, while several (Essence Sliver, Brood Sliver, Synapse Sliver, etc.) went over that in Legions. As for power in context, Brian David-Marshall delivered an excellent history of competitive Sliver decks as they were known up to 2004. The short version: lots of Tempest block Slivers, none from Onslaught block. Slivers, long casual favorites, now catered to that demographic exclusively. The end, right?

Not by a long shot.

Ah, Time Spiral block, source of all things wacky and what iffy and Tarmogoyf-y, how I love you when I don’t love to hate you!

Time Spiral block not only packed plenty of Sliver goodness into all three of its sets (Time Spiral, Planar Chaos, and Future Sight), but it also saw the printing of more new Slivers than previously had existed, serving up 43 new or at least color-shifted designs to go with the “Timeshifted” reprints of Spined Sliver from Stronghold and Essence Sliver from Legions.

The directly reprinted Timeshifted Slivers weren’t the only deliberate echoes of what came before in Time Spiral, the “past” set of a block predicated on past-present-future. Venser’s Sliver echoes Volrath’s Metallic Sliver and signals Venser’s obsession with Phyrexian technology, which eventually would land him on Mirrodin/New Phyrexia as Venser, the Sojourner and infect him to the point that he preferred to make a heroic sacrifice—resulting in Karn Liberated—rather than succumb to the corrupting force he had spent so many years studying.

The Planar Chaos Slivers reflect an alternate “present” for Magic, complete with colorshifted cards that indicate where the color pie might be had certain events gone differently. This is reflected in Sinew Sliver, which simply is Muscle Sliver shifted to white. 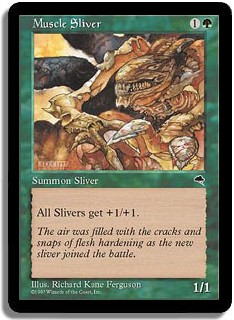 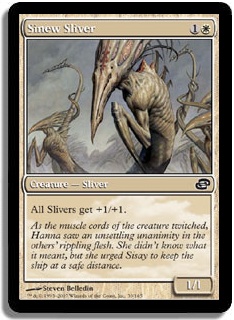 A little bit of “History Repeating.”

When I saw the Slivers of Future Sight, they didn’t suggest to me a possible future but an impossible one, or rather a mass throwing of design-darts never meant to be topped. Doug Beyer mentioned that the original visual look of Slivers was itself a tapped-out vein, and after Two-Headed Sliver, where else was there to go with this concept of blade-headed hive-minded little monsters? For that matter, after Mark Rosewater precious poison counters mattered as they never had before with the Sliver Kids’ famous victory, what else was there for Magic’s singular beasties to do? 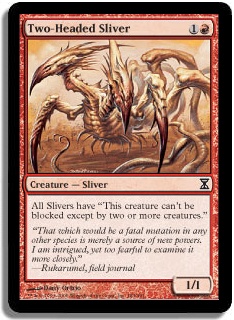 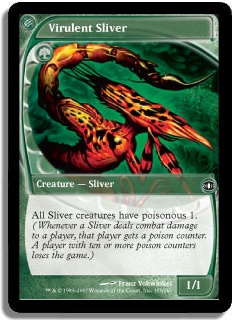 Move to Lorwyn, it seemed.

Magic 2014: Trying to Make Sense of Everything

The reaction Wizards was hoping for with the Magic 2014 Sliver announcement:

What they got instead:

Before I go on, let me say that I am reserving final judgment on the Magic 2014 Slivers. We don’t know the whole set, so it’s uncertain how these neo-Slivers fit into Magic 2014, much less Magic as a whole. On the other hand, we do have six card images, four commons and two uncommons. Wizards chose these for a reason. If it was to ease us gently into the changes, the reason was poor. If it was to rip off the bandage all at once, we’ll see.

For the best one-stop summary of official complaints, Evan Erwin Magic Show #274 covers most of what I’ve heard, seen, and thought. He likes that Slivers now only count on one side of the battlefield, whereas the Vorthos in me thinks the uniqueness of Slivers is lost with the change and the M14 Slivers are now “just another tribe.” To me there’s a difference between “too complicated for Magic” and “too complicated for a core set.” Old Slivers fell into the former category for me. Kept out of a core set, they would’ve been fine.

The rest of his Sliver rant, though, is spot-on. Magic 2014’s Slivers did get turned into the Allies from Zendikar kind of (I’d seen Soldiers before, but I like Allies as a comparison); the neo-Slivers do look like imports straight from New Phyrexia; and that one sure as heck looks like the Predator from Predator.

Here’s the catch, though. I can come up with a Vorthos explanation for everything.

The Slivers originally were Phyrexian biotechnology. The planeswalking of Time Spiral block included at least one “direct flight” from Dominaria to Argentum (which became Mirrodin which became New Phyrexia). Suppose that somehow a Sliver stowed away from Dominaria to Mirrodin/New Phyrexia and was changed there. Time Spiral block’s book storyline was incredibly complicated. If Wizards Creative wants to say something happened, it probably did.

That Sliver with a face and metal dreadlocks, Steelform Sliver? I can explain even it. Take one part Mistform Sliver (which can shift its form around), one part Venser’s Sliver (artifact Sliver of more recent vintage), and one part War Priest of Thune for those dreadlocks. Battle Sliver quotes a “Thunian scout,” so it’s a good bet the Slivers have shown up in Shandalar where Thune is. If you haven’t heard of Shandalar the plane, here’s your analogy:

Did some greedy mad baddie looking for resources bring Slivers along as part of an invasion force looking to suck out that sweet, sweet mana? I don’t have the facts, but speculation along those lines makes so much sense that I hope something close to it is correct.

No, I don’t think Wizards has betrayed us with neo-Slivers. They’re different. They had to be different somehow if they were going to come back. Doug Beyer has said Creative went through a lot of work defining the new Slivers, and based on their track record, I am inclined to give them the benefit of the doubt. It helps that I can put together a chain from Points A and B to C where I can make some sense of semi-humanoid Slivers on Shandalar.

For now, I hope the Vorthos community reserves final judgment on the Magic 2014 Slivers until the full set is known. We’ve only seen a piece of Wizards’ grand design. On the other hand, Wizards isn’t off the hook yet—not by a long shot. If I find Magic 2014 has screwed up the Slivers irrevocably, I’ll be planeswalking to Innistrad to stock up on torches and pitchforks. It’s up to Wizards now to keep me from making the trip.

Is Dredge back in Modern? Todd Anderson examines a spicy new list that could see one of the most infamous MTG decks rise once more from the grave.

How I Converted My Spooky Cube To A Modular Cube

Ryan Overturf continues his exploration of modular Cubes by showing how to make an existing MTG Cube modular, using his Spooky Cube as an example.

Bonk! Fresh off a Top 32 finish at CFB Las Vegas, Cedric Phillips shares his secrets to Mono-White Hammer (Lurrus) in Modern MTG, including his latest list and a sideboarding guide.
View More