To read the first part of my tournament report from GP: Denver, click here.

After I scrubbed out most ignominiously at my first”big” event at Grand Prix-Denver, I asked Cy Cook a question. Cy’s a fellow Eugene player and he’s very good, having qualified for several Pro Tour events. We’d been testing for the event for a two months and were heading into the event ready and rested, although Cy had to drive to Denver with Anthony Sansone, another Eugene player best known for the inability to both a) control the modulation of his voice and b) shut up.

A twenty-hour drive with Anthony is currently outlawed by the Geneva Convention as”cruel and unusual punishment,” and I wondered if Cy had made a wise choice in transportation.

When I didn’t see Cy on Friday, I wondered if he’d been sidetracked. When I told him on Saturday that,”We figured that you’d pulled over at a rest stop in Wyoming and shot him.” Cy chuckled and said,”No, I would have strangled him.”

But that’s not what I asked Cy. I’ve played Cy many times over the years, and I think my tournament record against him is something like two-for-fifty. I asked Cy, having played me many times, what he thought my biggest weakness as a player was. After going 3-4 (and really, really thinking I was going to do better), how could I improve as a player and make the Pro Tour.

And his answer was very interesting.

My goal? Well, I want to make the Pro Tour just once, so I can say I did it.

“And that,” Cy said,”Is the difference. You’re a Hobbyist. These are Professionals.”

That’s when it really started to sink in how close – and how far apart – I was in skill level compared to a lot of pros.

How much time did Darwin Kastle or Alex Borteh spend working on decks before GP: Denver? Ten hours a day? Six, seven days a week? I just read a Gary Wise interview where he says he drafts up to ten hours a day on NetDraft to improve his skills. Speaking as a Hobbyist, that’s something I simply don’t have the time to do. But for a Professional… That’s almost a necessity.

I used to always think calling an opponent for stalling was cheesy. Having now seen players fight tooth and claw for that last slot in a Top 8, I can see how the competition and desire to win justify pulling out all the stakes. If I’m in the finals of a $20 tournament at the game store on Friday night, I’d let accidentally drawing an extra card slide. If I was fighting for a possible $2,000 at a Grand Prix, then I could see myself – or any other competitive player – calling for the judge to watch my opponent for slow play.

I have a lot more respect for those who try and make a living at this game.

I’ve been told I’m a very talented player. But clearly there are large gaps in my game. Maybe if I practiced six, seven hours a day and actually weaseled my way onto a”name” team of Magic players, I might finally bridge the gap between Hobbyist and Professional. But I don’t know if I’m ready or able to set aside that much time in what might prove a futile quest. Look at Aaron Forsythe. Great player, yes, and he was on quite a winning streak during Nationals and Worlds last year. This year, he hasn’t been able to duplicate his successes. Was he just lucky, or has he just hit a rough streak?

In a brief but related segue, take the PGA. How many people play golf in this country? Not just those who hit the links every day, but duffers like me who play maybe a couple of times a month? Say, ten, maybe twenty million? How many people actually make a living at the weekly PGA tour events?

Your average pro golfer comes to an event on Tuesday, hopes to make a few extra dollars by playing in a pro-am event on Wednesday, and if they’re lucky, they’ll make the cut on Friday, guaranteeing them a little money. More than likely, they end up something like eight over par, pocket little more than expenses for their time, and end up packing their gear and clubs in the back of their 1989 Honda Civic with 120,000 miles on it and drive to the next event, in Biloxi, or Akron, or Hartford, wherever the next tour event is, hoping fate will smile on them this day.

For ever Tiger Woods, for every David Duval, for every Phil Mickelson, there are over a hundred of these players, who scramble for every chance they get. Some drop out and become the club professionals you see on driving ranges. Others keep chasing the dream in places like Jakarta and Kuala Lumpur. But there are precious, precious few who can make a living playing golf tournaments.

For every Jon Finkel, for every Chris Benafel, there are thousands of players with names like Will Rieffer and John Rizzo, soldiering on, hoping that the draws will be with them this day.

The current system would seem to always favor the Professional over the Hobbyist. And yet…

At the 1991 U.S. Open, Nick Price, a stalwart pro and always a challenger to win any tournament he entered, dropped out to attend the birth of his son. This let a ninth-alternate named John Daly to enter the tournament at the last minute.

The rest is history.

At Denver, a young man who hadn’t played a Standard event in over two years shows up after a 24-hour bus ride playing a deck archetype that had been dismissed by nearly everybody in the field.

The rest is history.

There’s hope for us scrubs out there. Every now and then, one of us catches that lightning in a bottle and proves the conventional thinking wrong.

But remember that Napoleon once said that”luck favors the prepared.” Practice long, practice hard, hoard knowledge, find your weaknesses and do your best to eliminate them. Find a team that will accept you and playtest whenever possible. And who knows, you might be the next Jon Finkel. Or the next Dave Meddish (although I wouldn’t wish that fate on anyone). 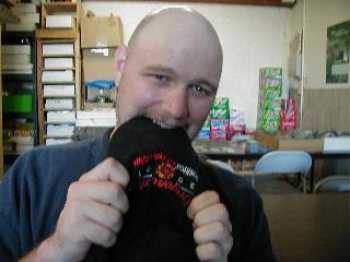 At least I know I’m getting enough fiber in my diet these days.