2. What are this deck’s good matchups and why?

Its good matchups are creature-based decks, both aggro and combo. You just have so much removal it’s hard for them to keep threats on the board. And obviously because you’re a control deck, your endgame is nigh unbeatable in those matchups. Post-board you just get to pack your deck with even more efficient threats and take out any clunky cards you may have. In the control mirrors, you are typically favored; they have more counterspells, but you have burn and can end the game much better than they can. Post-board is tougher because you both will have more live cards, but same as before, you have a better endgame.

3. What are this deck’s bad matchups and why?

Bad matchups would be any sort of storm/combo deck that doesn’t rely on creatures. You just don’t seem to have a lot of answers pre- or post-board to someone storming you out outside of Cryptic Command on a key spell, and you hardly ever provide a quick enough clock to force them into comboing early. Tron is also a tough matchup game one because they have a better endgame and more mana than you, and most of your removal is irrelevant. Post-board it gets much better but is still tough even though Relic of Progenitus makes it a little fairer. Also any deck with Blood Moon and a fast clock is tough because sometimes they can just get you and then blow up your Coalition Relic.

4. Would you recommend this deck for the PTQ season?

I would like to say no so nobody plays it, but yes, I would recommend this deck for the PTQ season! But I would also recommend playing A LOT of games with it. Not only are you a 5cc deck, but you also have Gifts, which makes for a lot of decisions, and tapping the wrong Vivid or pulling the wrong piles will absolutely cost you the game. But if Storm comes back, I’d probably recommend leaving this deck at home as it is. The great thing about a deck like this is you have so many ways to go with it, and you can definitely tune it to your own metagame without losing the core of the deck.

Thanks again, Stephen, for taking time to answer those questions.

I believe the reason Mr. Wilson didn’t run Mystical Teachings was because Gifts is just a better card overall, especially since the deck has so many ways to interact with the graveyard. I’d also try and find room for one Nicol Bolas, Planeswalker, just because he’s badass!

So there you have it! If you’re looking to play all the best cards in a control deck / shell, this deck seems like an awesome starting point.

Next up let’s talk about the deck I played at Worlds. In case you didn’t know, I played U/W Tron, and here is my updated list!

As you can see I’ve incorporated a lot of anti-creature cards in the maindeck. Against creature decks, you just need to buy time to set up your end game, and Timely Reinforcements does that extremely well, especially if you have a Ghostly Prison out. Manlands can be tough to handle for most control decks, and Ghostly Prison pretty much makes them all cost two more to activate. When you assemble Tron, you can easily close the game with a Batterskull or your best lock, Mindslaver. Batterskull is nearly impossible to kill when you have eight or more mana available to you. I believe Batterskull to be strictly better than Wurmcoil Engine in most matchups except for Jund, hence why I have two in the board.

Against control decks, they usually can’t beat your end game unless they have maindeck graveyard hate. After you set up Tron or resolve a Gifts Ungiven to help you get Tron set up, the game is all but over. From that point, you can try and cast Mindslaver every turn with the help of Academy Ruins until it resolves. You just have inevitability game one.

Games 2 and 3 you get rid of some of the dead cards for more inevitability through Eye of Ugin and Emrakul. Since most control decks will bring in graveyard hate against you, I try and go over it with that package. I also bring in Ethersworn Canonist, since he is a Rule of Law for your opponents but not really for you, since you have a lot of artifacts.

The worst thing you can play against, especially if they are non-creature Storm, like Ignite Memories, Grapeshot, or Lightning Storm. Game one, your best hope is they stumble, or you draw some countermagic and resolve Mindslaver. Games 2 and 3 you bring in hate depending on the combo. If they need to target you to kill you, then Leyline of Sanctity is your go-to card. If they are a storm deck, you can stop them with a Gifts of Ungiven by tutoring up â€˜Ethersworn Canonist, Trinisphere, Thorn of Amethyst, and Rule of Law.’ If they are Splinter Twin combo, then your Gifts pile would be â€˜Ghostly Prison, Torpor Orb, Dampening Matrix, and most likely a Path to Exile.’

Alright, enough about control decks; if I were to play an aggressive or midrange deck, it would be Jund, and I would start with Aaron Nicoll’s list from Worlds.

This deck just seems like it can be built to beat any deck, and that’s why I like it the most. This deck seems like a nightmare for any control deck. You just have so much card advantage in the form of Dark Confidant and Bloodbraid Elf. Not to mention you have a soft lock with Grove of the Burnwillows, Punishing Fire, and Liliana of the Veil. It’s very a solid deck for the Modern metagame. I would pick up Jund before I picked up Zoo. You keep one of Zoo’s best creatures and then trump them with Bobs, Kitchen Finks, and Bloodbraid Elves.

The sideboard seems to answer the biggest decks in the format as well. Having problems with combo? Board into a grand total of nine discard spells. An artifact has you down? Ancient Grudge is your answer. What about Zoo? Well you now have Batterskull and another Bolt. The only card in the board I can’t place my finger on is Burning-Tree Shaman. I’m not quite sure where I would want that card. Even in the matchups where I think I want it, I would rather have something else. It would be the first card I would cut from the board for something like Thought Hemorrhage, Surgical Extraction, or Thrun, the Last Troll. But this is definitely a deck I could get behind for the PTQ season.

It’s been awhile, and I’m sure some of you want to know what the red power card looks like. Before I show it to you, know that we had to go back and depower all of the previous cards since they were a little too strong in testing. The red power was very solid but wasn’t over the top. Without further ado: 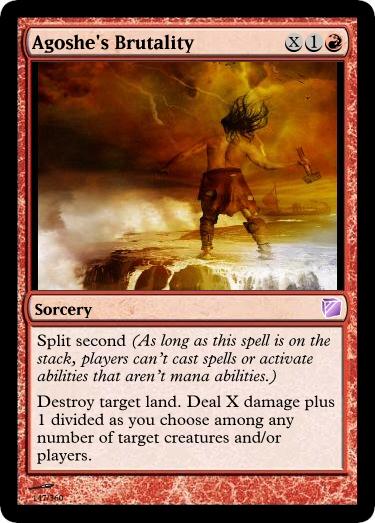 We struggled really hard with this card. We wanted all the power cards to be good in the early and late game. Originally this card just shocked and destroyed a land but wasn’t keeping up with the other power cards. Allowing you to Blaze your opponents out late game was the answer. It allowed the card to be good no matter what turn it was even against control decks, since it’s uncounterable.

If you want to follow the progress of the Custom Cube you can go to the Facebook page and like us. Follow Justin Parnell and me through the whole process. We will be spoiling the 10 new mechanics on that page.

As always thanks for reading,

P.S. I’ve been thinking about making some more videos. If you would like some videos on Modern, let me know in the comments!