The easiest way for me to be sure I don’t miss any important events is to tab over to mtgmom.com and see what happened in the weeks between Baltimore and now, and then to look up coverage for each event. Looking at that calendar, the events that I need to research from the week after Baltimore are GP Lille and StarCityGames.com Open Series: Tampa.

There were six total Corrosive Gales. There was no U/B Control in the Top 8. Was I wrong? I don’t think so. I predicted the rise of decks that were good against U/B Control, and those decks rose to the top. U/B Control was one of the top five decks in Day 2 and might have been more popular in Day 1.

All things considered, I’m quite happy with how this event went in terms of verifying my expectations. Now let’s see if things went similarly at the event in Tampa at the same time. 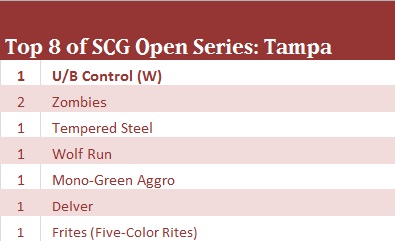 I’m surprised that U/B Control managed to beat Zombies in the finals, but I haven’t actually tested the matchup a lot; it just seems like it should be bad to me intuitively. Also, I’m not surprised David Sharfman won the tournament as he’s a much better player than most of his opposition. Aside from that, I think aggro performed pretty well here, as expected, which actually helps explain how Wolf Run managed to Top 8 both of these tournaments. While it’s not great against the decks from Baltimore, it’s very well positioned against the decks that are good against those decks, so this is just a case of people finding success by going one level deeper. (Note: I think that in general, trying to next level a tournament in this way is too dangerous to be worth doing most of the time, but it can happen to work out very well for some people if their pairings go well early.)

At this point, glancing at the calendar again, I see that the next two weeks have the SCG Open Series: Dallas/Fort Worth, and the SCG Open Series: Sacramento. It’s tempting to just skip ahead and see what happened at each of them, but I should try to make some predictions first. I’m less sure about how people react to and in SCG Open Series events than in GPs, but it’s worth taking some guesses.

The coverage of Lille makes it look like Zombies just tore through the Grand Prix. I assume this will make people take it more seriously, although I’m not entirely sure how much Americans care about European events. I assume they do care, though. Taking it seriously means playing it more and also trying to beat it more, so I expect a greater representation in the tournament, but I don’t expect fantastic finishes because I think the deck is beatable if people are gunning for it.

The Top 8 from Tampa included exactly three copies of Corrosive Gale, a card that’s not impressive against any deck from either event. I’m pretty sure I’d be happy to play Esper Spirits against any deck in the Top 8 in Tampa, so I wouldn’t be surprised if it did well in the coming weeks, but I don’t know how many other people are actively looking for an opportunity to play that deck again the way that I might be.

Aside from that, I’d expect a rise of decks that are good against undying aggro like Wolf Run or maybe Humans with Celestial Purge. Some kind of U/W control deck would also be well positioned. Timely Reinforcements is becoming pretty big game here. 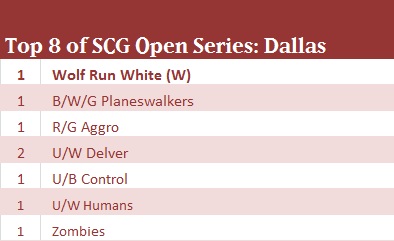 The Humans deck has three Celestial Purge and two Timely Reinforcements in its sideboard. Basically, white rose up to beat the aggressive decks, which is why we see two unusual board control decks in the finals. Looks pretty straight forward, and again, roughly what I’d expect. (Note: Top 8s are generally pretty diverse, and there are always holdover successes that sneak through the aggro deck in the Top 8 that’s looking to beat them. This allows me to focus on the decks I want to focus on in creating a narrative and validating my predictions. It’s possible that I could look at the same results and tell you a different story if I viewed the format differently. I think my analysis is accurate, but it seemed appropriate to offer fair warning that there might be other interpretations of the same data. While I understand I’m reporting facts with a bias, I can’t fully eliminate it.)

Seeing a Top 8 full of board control decks and Delver makes me think we’re getting close to a swing back in U/B Control’s direction, but there might still be a few too many Zombies. I like U/W Control, but there may be too many Delvers. I still like Spirits’s position. I feel like blue decks should be able to beat these white decks. Let’s see what happened next. 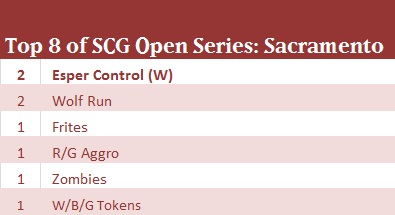 First of all, these Top 8s are diverse enough to make it difficult to find a single clear picture. Second, we see two copies of Esper Control, which isn’t a deck we see a lot, so it’s time to look at the decklists. Both are planeswalker heavy control decks with Lingering Souls, Day of Judgment, Mana Leak, a standard assortment of flashback card draw, some removal, some Snapcaster Mages, and some six-drops. I’m not surprised to see Frites (French Rites) in the Top 4 following a decline in U/B Control. Wolf Run continues to do well, which indicates to me that things didn’t change all that much in this week possibly because there wasn’t a GP to really shake things up. So Wolf Run succeeds for the same reason it had before: it’s good against the aggro decks. Except now, it also has board control decks that it also presumably preys on. There aren’t really enough counterspells to keep it in check.

Where would I recommend going from here? The new Esper Control deck seems very good against creatures. Lingering Souls and Day of Judgment is a difficult set of cards to beat. The easiest way to beat such a deck is to go over the top as a control deck by playing U/W or U/B with more counterspells with cards like Ratchet Bomb, Pristine Talisman, and Curse of Death’s Hold to combat Lingering Souls. Alternatively, you can play a deck that forces them to be an underprepared control deck. If you can ignore tokens by playing threats that don’t really care about them, like Primeval Titan, Inferno Titan, or maybe even something like Olivia Voldaren, they may just not have enough of the right answers. Relying on big creatures is awkward against all those Tragic Slips and Day of Judgments, but in a deck like Frites you might just be able to play more game ending threats than they can deal with. Personally, I’m less comfortable with this approach than just forcing them to be the aggressor, which they’re not well set up to do.

What’s striking to me, upon further reflection, is that there isn’t a single Delver deck in the Top 8 and only one in the Top 16. If I knew the format was going to look like that, I’d play U/W Control in a heartbeat. Unfortunately for me, I simply can’t believe that that’s realistic, especially since I think Delver is exactly the kind of deck a lot of the better players in the Invitational will be looking to play.

I was about 95% to play Seachrome Coast in the Invitational before looking at the last few weeks of Standard, so my conclusion is certainly weighted by my bias. If I were forced to choose a deck without Seachrome Coast to try to compensate for that bias, I would want U/B Control against this particular Top 8. I think it can play more counters to out-control the Esper decks, and I think it’s naturally well positioned against Wolf Run and Frites. Tokens shouldn’t be that much of a problem so it’s just looking to avoid the aggro decks, but I think the rest of the field is extremely hostile to those decks.

If I couldn’t play blue at all, I might start by testing Frites (I understand that it has a tiny bit of blue) against Wolf Run and look to play winner of that matchup, but I don’t honestly know all that much about non-blue decks.

Also, if I were to be really thorough, I’d want to review recent Magic Online results. I wouldn’t try to track their history as much because I don’t think people react to them the same way, but I do think it’s worth seeing what people are playing online in the moment. Honestly, things change so fast online that I think the time of writing this might be too far out for Magic Online to be all that useful.

I hope this has been helpful in demonstrating the process of how to analyze past results to predict future metagames. I strongly recommend using a method like this when figuring out what to expect, and I also recommend looking at these results for yourself and coming to your own conclusions independently from mine to try to help filter out my bias. Compare your expectations to mine and consider whether my reasoning makes sense.

Also understand that I’m mostly just trying to decide which U/W deck I think is best positioned. As always, it’s important to play decks you know and feel comfortable with. I think there’s a good chance that the range of decks you feel comfortable playing is much smaller than the range of decks than can do well at a tournament, and it isn’t a problem to use this kind of analysis simply to pick from one of a few different decks, which is essentially what I’m doing. The best answer in a vacuum may not be the best answer for you.