I mentioned at the tail end of my last article that I would have some more time for playing Daily Events. Due to some scheduling amendments, however, this has only proven to be partially true. What’s more is that I’m not entirely settled on my White Weenie list. I’d prefer to present you guys with something I’m excited about and feel is solid, which will additionally provide me with some confidence to back up my Daily Event videos.

That’s not to say there isn’t a silver lining here since today we can (hopefully) open up some broader discussions rather than narrowly focusing on a single deck. Our topics for today are Pauper predation (the relationship between decks in the metagame and the strategies they prey upon) and the existence of Magic Online bugs within the Pauper format.

In case you’re absolutely starving for a follow-up to our previous White Weenie discussion, allow me to quickly offer up a list I’ve been testing out. Please keep in mind that this list is not furbished, still in testing, blah blah blah.

The idea here is to make the deck as streamlined as possible; in other words, give it a tight curve and play the beatdowniest beaters we can.

I’m trying out Guardians’ Pledge so I can have a way to Hail Mary our guys through Fangren Marauder, Gray Merchant of Asphodel, and Lone Missionary induced life gain. It also can help beat Burn decks in a race since three or four guys on the board will roughly equate to eleven-to-fourteen damage. I’m definitely aware of the advantages provided by Bonesplitter, so I have no qualms about switching back if Pledge doesn’t test well enough. 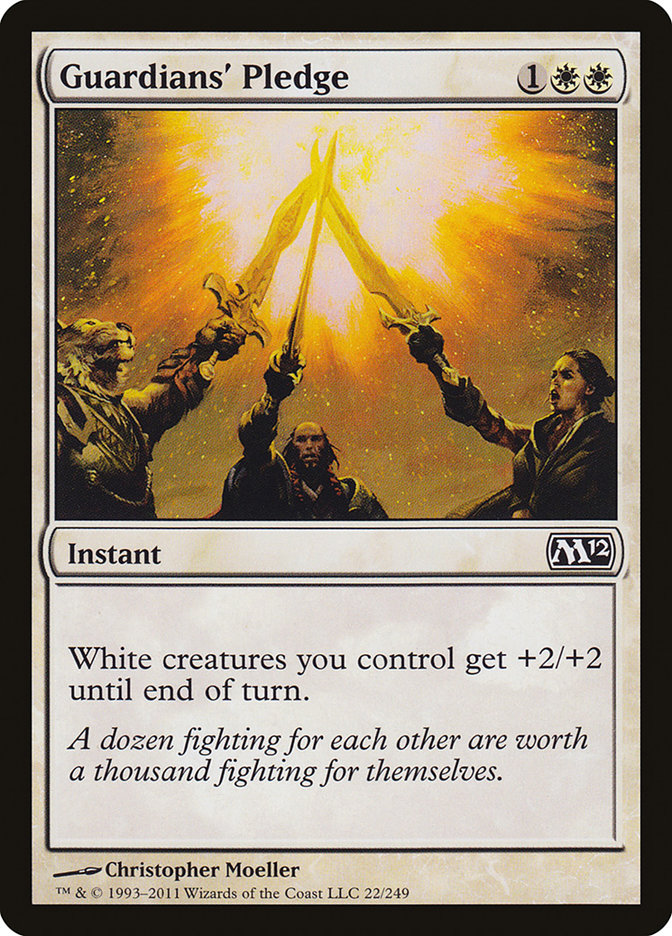 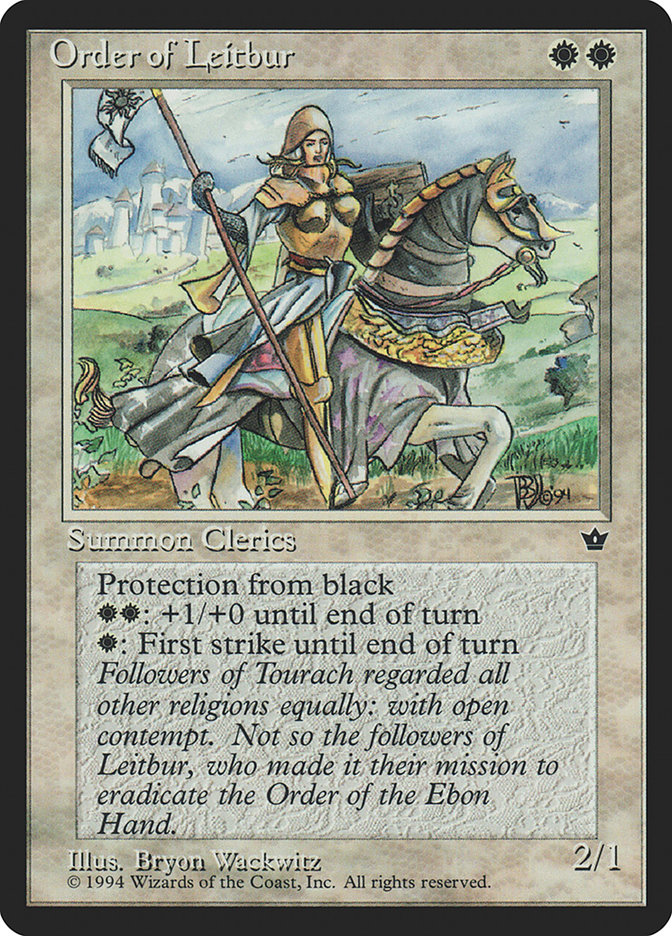 Order of Leitbur has come charging into the maindeck, as was requested in the following comment:

“I like maindecking Order of Leitbur. Mono-Black is the most popular deck right now, and Order is a good out against their strategy as well as a reasonable two-drop that you can use as [a] mana sink.” —Gabriel Gutierrez Saldate

Thanks for the suggestion Gabriel!

Lastly, Journey to Nowhere has fully replaced Unmake since I’ve lowered the curve and many people have advocated it usefulness. Here’s hoping we win before it gets bounced or busted!

The sideboard is more or less testing fodder (aka rubbish), and I’m not all too sure what to do with it currently. If you have any thoughts on straightening up this jumble, please let me know in the comments section!

Let’s move on to one of the main topics for today’s article!

The concept of predation in the Pauper format (or any other format for that matter) is very simple. It’s the idea that the Pauper metagame exists as a fluid dynamic structure in which prominent decks will have natural advantages over some decks and natural disadvantages over others. Essentially predation is a metagame food chain and a pertinent variable linked to the success of Pauper strategies.

Predation is in many cases linked to other forms of Magic: The Gatheringvernacular, such as whether or not a deck is “well positioned” or whether or not there exists a “rock, paper scissors” style of metagame. As we look at some examples, please keep in mind that predation is not the superlative variable but rather one of many. At the end of the day, it’s just another fun aspect of Magic we can study (that just so happens to help us get better)!

While there are certainly matchups that are more or less even, the idea of predation is more centrally concerned with a predator/prey dynamic between two decks. In other words, matchups where one deck is naturally favored over another (this can be by a small, moderate, or large percentage).

One problem we will often encounter when talking about predation is the tendency many of us have to exaggerate. “Deck A versus Deck B is a free win.” “Deck A has an unwinnable matchup versus Deck C.” We can’t realistically say these kind of things without first taking a myriad of variables into consideration (these include but aren’t limited to playskill, quality of draws, the die roll, sideboarding, etc.), and even then there will usually be exceptions to the rule.

To further explore this concept, let’s take a look at one of the most popular decks from this past week: RUG Tron. Many of you will already be familiar with this deck, but if you’re not, take a gander at this recent winning list.

Some of you may instinctively be able to dissect a list like this and understand its strengths and weaknesses. For the rest of us, though, further inspection is going to be required.

Based on a small bit of experience playing against this deck (and from an initial examination of this very list), I’m going to contend that RUG Tron is inherently capable of regularly preying on “weenie” (small creature) strategies that lack card advantage and staying power.

Let’s group together a selection of “predator” cards to further illustrate this assertion:

That’s 21 cards (a third of the maindeck) that interacts more or less favorably against short-term weenie strategies. Khalni Garden is a land that gains life and along with Quicksand can be tutored up by Ancient Stirrings or Expedition Map. Sea Gate Oracle and Mulldrifter keep the deck ahead on cards while deterring or trading with small beaters.

Firebolt nets card advantage and stunts the opponent’s board position, and Flame Slash exterminates Carapace Forgers, Gray Merchants, and Razor Golems. Rolling Thunder can do better than two-for-one but requires an active Tron to do so.

Quicksand is deceptively useful, as its colorless identity gets around Apostle’s Blessing and Benevolent Bodyguard and its instant speed activation can counteract Ninja of the Deep Hours (unless they’ve got a second Ninja with ninjutsu mana up).

Topping it all off is Fangren Marauder, who gains very significant chunks of life in just one or two turns. It doesn’t stop there either. Aggressive weenie decks are by their nature not very defensive, so a Marauder cracking in for a quarter of the opponent’s life total is a serious threat.

So now that we’ve looked at RUG Tron’s predatory side, let’s think about what strategies might end up preying upon the deck in turn.

A notable hole in this deck’s capability to interact is its lack of permission (and subsequently its inability to stop big splashy broken things). Note that I’m not saying this makes the deck “weak” or suboptimal; it just happens to be one of the deck’s vulnerable predation traits (and all decks essentially have weaknesses, albeit of varying importance).

This means that a big unwieldy monster like Ulamog’s Crusher will be considerably difficult for RUG Tron to mitigate (without dual Flame Slashes or ten mana for a Rolling Thunder anyway). Additionally, Cloud of Faeries + Mnemonic Wall combo decks (be they Esper aligned or otherwise) can potentially have a field day with Tron since their combo basically strides along (at least in game 1) unanswered and undisrupted.

To prey on RUG Tron, I think the key is to dream big. Actually, dream enormous. Make the biggest and scariest hexproof creature possible. Create an infinite army with Midnight Guard and Presence of Gond, or generate infinite mana (faster than they can). If that doesn’t appeal to you, then by all means explore some other options.

I’m going to present you guys with a totally optional intellectual exercise. Below you will find deck lists for two of the format’s most popular decks: Affinity and Mono-Blue Delver. These strategies are still very much alive and kicking, and they both contain unique sets of predation-based attributes.

Your mission, should you choose to accept it, is to identify which strategies these decks will prey upon and which ones they will fall prey to respectively. You may also talk about how these two decks interact with each other in terms of predator versus prey. Be sure to illustrate why you think this is true, and don’t forget to cite specific cards and interactions!

Up first we have a recent Daily Event list by longtime Affinity pilot Vagar.

And next we’ve got Delver mainstay Mezzel’s current weapon of choice.

I hope some of you will share your thoughts about the predation status of these decks in the comments section!

Our second topic for the day is Magic Online bugs (at least ones that pertain to the Pauper format). Bugs are anomalous glitches unique to Magic Online that result in cards not doing what they’re supposed to do. They’re an unfortunate but present downside to playing the game online, and a few of them have been affecting the Pauper format.

I’m merely hoping to make Pauper players aware of these bugs. People need to know about the, because not knowing about them can weigh in on the outcome of your games. By no means is my intention to complain, place blame upon, or criticize the people who alter and oversee Magic Online. That being said, I do hope that these bugs are one day corrected for the sake of the format’s participants. 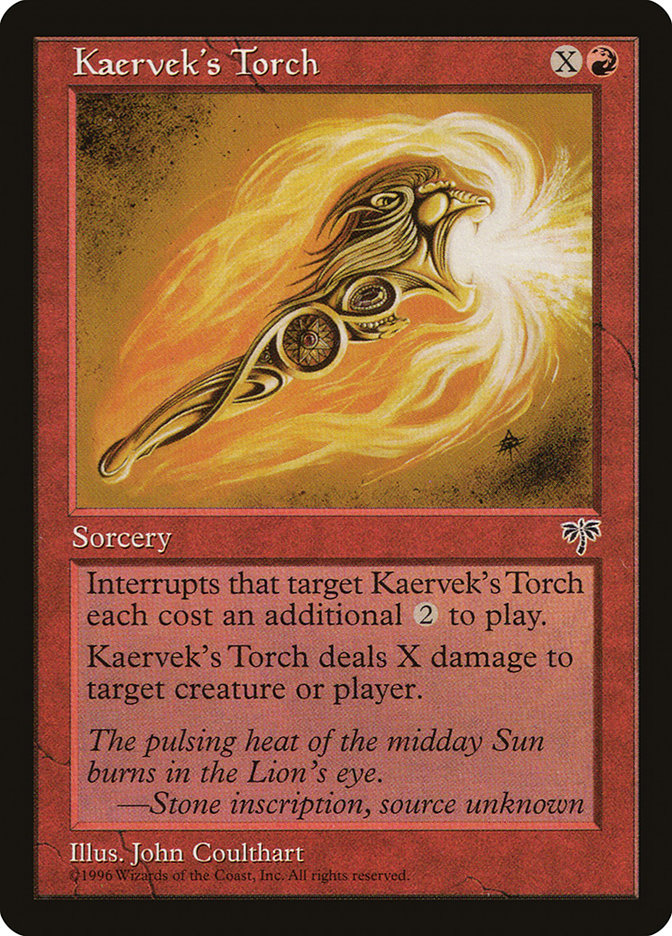 If you don’t want to read about the Torch Bug, feel free to watch a demonstration video I made about it earlier this year. As far as I can tell, this bug has yet to be eliminated. See this forum thread for additional details.

This means that players who don’t know about the bug may end up making key plays that hinge upon the card doing what it’s supposed to do and end up losing games as a result.

Despite being bugged, Kaervek’s Torch still sees play in Daily Events. I imagine it would see even more play in the future if it were fixed. 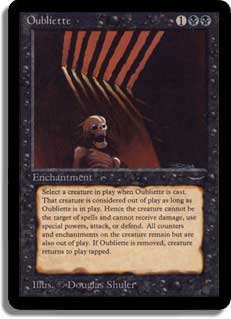 The Oubliette Bug also has a forum discussion you can visit for more information. Basically, its “leaves the battlefield” clause does not take effect, which means it permanently exiles creatures (the exiled creatures won’t return even if Oubliette is destroyed, bounced, etc.).

This is likely the reason why the vast majority of black decks are playing Oubliette over Unmake. The bug gives MBC players an effect that powers up Gray Merchant of Asphodel and coaxes opponents to “erroneously” sideboard and make plays with the intention of busting enchantments. You can see how this can impact the outcome of games.

Please be aware and make others aware of these bugs! They can be very frustrating to discover “the hard way” and in my opinion shouldn’t be the reason why someone wins or loses a game. If I’ve missed any current Pauper-impacting bugs, please let all of us know!

I’m hoping you will contribute to one or both of the topic discussions. Any feedback you have on my selection or handling of the topics is also greatly appreciated. Looking forward to chatting with you all!