Sorry I wasn’t here last week… due to some technical difficulties, I wasn’t able to get the column done in time to make it up last Friday, so I figured I’d just write what I was planning on doing last week for this week…

But then Wizards of the Coast dropped the bomb last Friday…

I had a fair amount of work to do last Friday before ending my work week, but man my productivity got torpedoed as I poured over the spoiler… not only pondering and digesting the brand new sweetness but being blown away by how many fantastic reprints there were! Finally, my work stalled out, I had to take to Twitter:

this new set makes me want to quit my jobs & walk the earth like Caine from Kung Fu, only handing out #MTGC13 decks instead of ass whippings

So I spent the weekend poring over the spoiler and drooling over the set. Seriously, if I had come into work Monday morning and received a package filled with Commander 2013 decks from Wizards I’d have quit my job on the spot and started walking the Earth, going from game store to game store, meeting people and playing Commander. 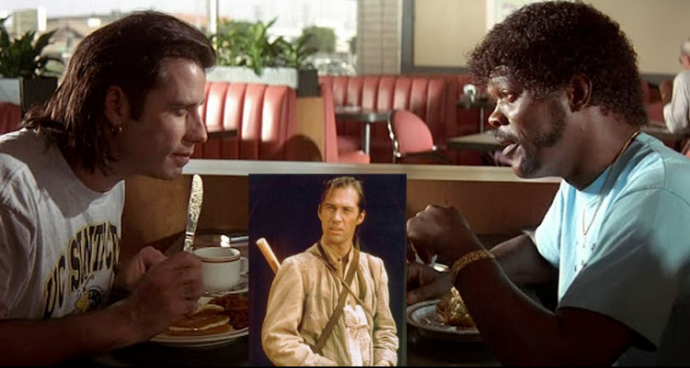 Sure, Vincent Vega may think that sounds like being a bum, but I’d call it living the life. Sadly, there was no package from Wizards waiting for me Monday or any day this week… and by the way, it’s been a week knowing the entire spoiler and we’ve still got another seven days before we can get our mitts on this sweet product. Normally, you get to see a new set’s spoiler and by the end of the week you get to play in a prerelease so at least you can get some small amount of the new cards to tide you over until release day… when you can dive in and roll around in all the new cards you could possibly want. Since there is no Commander prerelease, we’ve gotta wait two weeks — oh, the agony!

So two weeks back I talked about the five new Commanders in my column. This week, I’d like to go over all the other stuff we have to look forward to.

Check out all five decklists here, and the Commander 2013 release notes here (including FAQ). Each of the decks contains 15 of the 51 new cards printed for Commander 2013. Each of the decks has three legends of the same three colors, two of which are brand new and one of which is a reprint. Each deck features three of the new Curses (matching their colors), and one of the new Temptations.

In All Five Decks

I really love what they did here, especially reprinting Sol Ring and Command Tower. Those two staples of the format have creeped up in price as the popularity of Commander has continued to rise since the printing of the first set of Commander decks. The new Commander land on the block, Opal Palace, will certainly find its way into nearly any Commander deck, even mono-colored ones that would otherwise not bother with Command Tower.

I really love the cycle of Curses, especially since the original Curses from Innistrad Block gave us such a tantalizing taste. Curse of Misfortunes is so tempting, but with only ten other Curses available it didn’t seem worth the trouble to build a five-color singleton deck featuring them. Now that we’ve got five more to add to the mix, it makes things much more interesting!

I also find the other five cards on this list quite nice as well, and I can see myself playing them in all sorts of decks so I’m glad there are going to be plenty of them to go around. I love that Diviner Spirit might very well connect with an opponent more often than not — after all, wouldn’t you pay two life to draw two cards without costing you a card? Darksteel Mutation is a pretty cool new spin on Gaseous Form… while you turn the creature into a super-blocker on the ground, neutralizing the creature but keeping it in play is often better than killing them, especially when it comes to Commanders or graveyard shenanigans. I also really, really love Restore and the ability to plunder people’s graveyards for special lands that may have gotten previously nailed with a Strip Mine.

Nothing really here to talk about, just listed for the sake of completeness. I will say that I think it’s pretty cool that you can fix your mana decently in Commander without really having to trying and acquire the more expensive rare dual lands.

Even though I don’t usually play Esper all that much, I’m really looking forward to picking up Eternal Bargain. I really like the primary Legend, Oloro, Ageless Ascetic quite a bit, and the other two Legends fit right in. I really like the adjustable nature of Toxic Deluge, using life points as a resource, especially one that’s usually going to be quite abundant in this deck. Order of Succession and Serene Master just seem like super-fun cards, and I think Act of Authority is a sweet piece of removal, especially since the exiling is permanent whether or not the Act is destroyed. I like that the first hit is “free” but if you want to use it again you run the risk of having it come back and bite you in the butt.

The more I’ve thought about it the more I really want to pick up Evasive Maneuvers too. I love both the new Legends, and the art on the reprint is fantastic. I really like how Surveyor’s Scope can help dig you out of a really big hole if you’ve fallen way behind on lands, or you can abuse it if you’ve got ways to sacrifice lands – there’s a reason why the card exiles itself. I can’t wait to crush dreams with Bane of Progress, though I’m a little sad that I’ll be having to make some adjustments to my own decks, which tend to run heavy on artifacts — we’re entering a new era of Commander, and Bane of Progress is going to be one of the pillars! Angel of Finality is a brutal way to keep graveyards in check, and Unexpectedly Absent is going to be handing out rude awakenings left and right

Nature of the Beast (Naya, Green/White/Red)

I have to admit I’m not overly wild about the Legend package here — Marath is mildly interesting but strikes me as being incredibly mana-intensive. Gahiji, Honored One has a cool name and seems like it could get out of hand with token creatures, either your own or those controlled by opponents. Mayael the Anima is a fine Legend but feels out of place here despite the Beast theme since there are only 22 creatures as opposed to 35 spells, and not many of those creatures have a five or higher power. She’s just not going to hit all that much. Of the new cards I think From the Ashes is my favorite —while I’m not normally a fan of mass land destruction, this is how you do it right in Commander, sweep away all the overpowered non-basics but let everyone replace the lands with basic lands so they can still cast their spells and stay in the game. Where this deck shines, though, is the reprints: Homeward Path was a stellar card from the first Commander set, and having another batch of them printed is wonderful. Avenger of Zendikar is a Commander staple for all green decks, as is Wrath of God for all white decks. And if you haven’t had the pleasure of plainscycling with Eternal Dragon, get ready for some fun!

When I look at weigh the quantity new cards and reprints I’m excited about in Power Hungry compared to the other decks, it falls down the list quite a ways. That said, the gigantic and majestic body of Prossh, Skyraider of Kher weighs heavy on my desire, and there’s no way I’m not going to pick up a copy of this deck. It also strikes me as one of the best synergistic decks of the bunch, with all the sacrifices feeding all sorts of engines. Don’t get me wrong, though — there are some other sweet gems to be had. Widespread Panic is just nuts as a hoser, and is sure to freak out those who love to constantly touch and fondle their decks with tutors and fetches. I also really love Ophiomancer as a conditional token-maker, providing a deathtouch blocker during each player’s turn or sacrificial fodder each turn. Also, on the reprint front, I’ve been dying to get my hands on Hua Tuo for years and have come this close to pulling the trigger on buying one several times, but always changed my mind due to its price. Now I get one as a bonus for picking up Prossh!

I play Grixis even less than I play Esper, and while I think Jeleva and Nekusar are pretty cool they don’t really tug on my heartstrings. I do really like the mini-game you play with all the players with Eye of Doom (and the way you can break the synergy with Hex Parasite and Power Conduit). And True-Name Nemesis seems like an insane card to latch on someone’s back to provide constant problems.

All the Temptations offer a great sub-game that I can’t wait to see in action. This week I recorded a podcast with the fellas of Commandercast, and they brought up an interesting thought — which of the Temptations do you think players will generally pass on the Tempting Offer? Which do you think will nearly always get a few players to accept the Tempting Offer? That sub-game is going to be rough on the player to your immediate left — does he skip the offer in the hopes that everyone skips the offer to limit the benefit to the caster? What happens when everyone after him gives in, leaving him the only one not benefitting? I really am curious to see how they play out!

So what cards from Commander 2013 make you want to walk the earth and play Commander? Let me know if the comments below!