I’m super-stoked. I’m so stoked that I took a vacation day off from work on November 1st so that I can be at one of my local gaming shops when it opens, swoop in to buy a couple of the new Commander decks, crack ’em open and start playing Commander.

If you’re a fan of Commander and are in the Richmond area, let me know what you’re doing November 1st in the comments or send me a message so we can get together and play!

We got to see two of the Legends from Commander 2013 a couple months back and they looked pretty sweet… but this week we got to see the other three Legends showcased in each of the five new Commander 2013 decks, and all five fall into two categories that utilize some of the unique rules of Commander to give them their power. I’m calling the groupings Tax Collectors and Zoners.

The cards in the Tax Collector group remind me of how Wizards of the Coast have treated legends since they started really supporting the Commander format. Basically you could tell when a card was made with Commander in mind when the way it was put together makes it clearly better in multiplayer compared to its power level in a two-player duel. But even if you didn’t play multiplayer, you could still play these legends in your deck if you wanted to.

The Tax Collectors are similar, but rather than being powered up by the number of players you’re playing against they are primarily powered up by the Commander tax rule. They have an effect that gets bigger the more mana you use to cast them, so the first time you cast one the effect is tied to the regular casting cost. However, each additional time you cast the creature from the command zone you must pay an addition two mana tax, which in turn ramps up the triggered ability by two.

This creates an interesting tension. Usually in Commander, your Commander tax tends to be onerous and oppressive, a penalty you play for getting your Commander needlessly killed or exiled and was pretty much all downside. Often, it was in your opponents’ interests to make that tax larger and larger, making it too difficult to cast your Commander or at least making it impossible to replay it and do anything else. But with this crew of Tax Collectors, your opponents have something to think about. Do they really want to kill or exile your Commander and give you the chance to recast it for the added +2 effect?

Let’s take a look at the two Commanders we already knew about: Prossh, Skyraider of Kher and Jeleva, Nephalia’s Scourge. 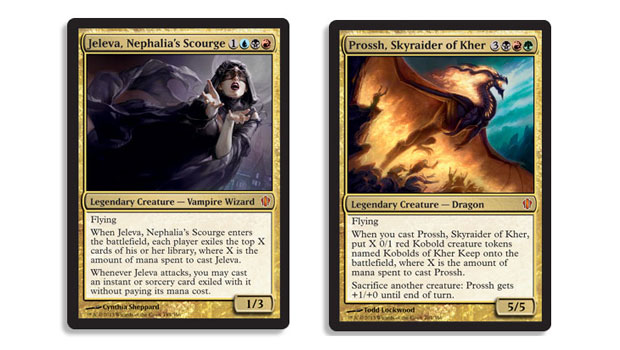 In true Jund devouring fashion, Prossh, Skyraider of Kher creates a horde of 0/1 Kobold snacks that are pretty much only there to feed Prossh and enable him to hit harder when he attacks. What’s cool here is that you don’t need to sacrifice the Kobold snacks unless it looks like he’s going to connect with another player’s face, and you can run Prossh into a blocker that might be able to kill Prossh pretty fearlessly. Say your opponent has a Bloodgift Demon out there; you can swing into him and if your opponent doesn’t block you can sacrifice the six Kobolds you got when you first cast him to smack your opponent for eleven. If your opponent blocks, there’s no need to sacrifice any Kobolds; both creatures die, but your guy goes to the command zone where you can cast him again for two more mana, adding eight more Kobolds to the field and giving Prossh the potential to hit for nineteen… keep in mind you kill opponents when they take twenty-one total combat damage from a single Commander, and Prossh can easily make that happen all on his own. Just think what you can do when you fill out the deck with plenty of creatures that make easy sacrificial fodder in black and green… and tap into red’s ability to temporarily steal creatures so you can feed your hungry dragon. As if Insurrection wasn’t already backbreaking.

Jeleva, Nephalia’s Scourge turns the screws on your opponents even harder. Exiling four random cards off everyone’s deck is brutal enough in a singleton format, so do you really want to keep killing her and having her exile six, eight, ten more cards? What happens when you kill Jeleva, she gets cast again and the +2 from the Commander tax exiles someone’s key card from the game? Is that player going to mad at the guy playing Jeleva or is he going to be mad at you?

To make matters worse, Jeleva’s additional special ability encourages you to attack with her, letting you plunder a sweet instant or sorcery from the pile of cards she’s exiled. It’s not as if you couldn’t easily kill a 1/3 attacker… but do you want to?

Another wrinkle to add to all these interesting interactions is, whenever Jeleva’s controller casts an instant or sorcery spell from exile, it’ll be put into the owner’s graveyard and put back into the game where they can potentially access it.

Alright, let’s take a look at the third Legend added to the Tax Collectors: My initial impression is that Marath, Will of the Wild is a bit on the underwhelming side. A world with Fleecemane Lion in it makes a 3/3 for three colored mana look rather tame, especially given that this is a legend. This is a guy that sorely needs a Doubling Season in play to kick things into high-power mode. However, the ability to move around damage, +1/+1 counters, and/or make little Elemental dudes is pretty sweet. It is nice that Marath can easily kill itself off by basically paying its echo cost at instant speed, letting you cast it again and scale up the Commander tax. Even so, this is an incredibly mana-hungry card that needs a lot of help to be impressive and intimidating, making it a good Commander for a more laid-back, low-powered deck.

One final thought… these Tax Collectors make certain kinds of removal even better in Commander, cards that neutralize them without killing or exiling them.

Next up are two more newly-spoiled cards I call the “Zoners.” These cards break that third wall by explicitly referencing the command zone in the ability text, pretty much demanding their exclusive use as Commanders. I mean, Prossh, Skyraider of Kher would be perfectly fine in a Karrthus, Tyrant of Jund dragon-themed Commander deck, while these two would be a bit awkward as one of your 99. What I find most interesting about this card is where the other three new Commanders we just talked about utilize the Commander tax as a benefit, Derevi circumvents that tax altogether. It’s like no matter how many times Derevi dies, no matter how large that tax, all you gotta do is pay four mana and boom… Derevi is back in play. This must be what it feels like to be a multi-millionaire with so many offshore accounts you never need to worry about taxes. And you can do it at instant speed, too! I mean, it’s not exactly a tricky card because it’s in your command zone where everyone can see it, and see whether you’ve got the mana to effectively flash Derevi into play whenever you want, tapping down something or untapping something… the trick of course is what you’re going to tap or untap in a multiplayer game. This could make for some interesting politics, tapping down someone’s blocker at the end of their turn to leave them wide open, or untap a tapped blocker when someone attacks them for the kill.

Let’s not overlook that the tap or untap ability not only triggers when Derevi comes into play but also when any of your creatures deal combat damage. Might this be the bird legend that Jonathan Richmond (aka Norbert88) has been waiting for?

Last up is Oloro, Ageless Ascetic: What I love most about this card is how much the artwork captures the style of this card. Oloro is a Zoner because while he’s in the command zone, you gain 2 life during your upkeep. Oloro costs six mana to cast, so we’re going to spend at least several turns in the command zone just chilling out, giving you life. Just like in the artwork, which shows a giant solider dude lounging in his chair. Relax, Oloro’s saying – I got your back.

And your opponents thought Sun Droplet was annoying? Oloro is giving you life whether he’s in play or not! However, you are strongly encouraged to get Oloro into play as soon as possible since that triggered ability is pretty amazing – pay one mana to draw a card and drain each of your opponents for a point, and you can use this ability each and every time you gain life? It’s like extort on steroids! I have to admit, there haven’t been many legends that have made me want to build an Esper Commander deck, but Oloro has me excited to see what I can get up to now!

I do have to admit that I find the Zoners a little unsettling. My gut reaction to reading a Magic card that explicitly calls out the command zone – a zone that only exists if you’re playing a specific casual format – is to not like it. It just feels a little bit wrong… but I still think they’re going to play great. Much like with Command Tower, I got over that weird feeling pretty quickly. If you’re a fan of the Commander format, then you should be thrilled about these developments because these really demonstrate that Wizards of the Coast thinks Commander is a format that is here to stay, and they are willing to print cards that are tightly bound to the format.

Yeah… I really can’t wait to see what else they have in store for us in Commander 2013!

What do you think? Let me know in the comments below.