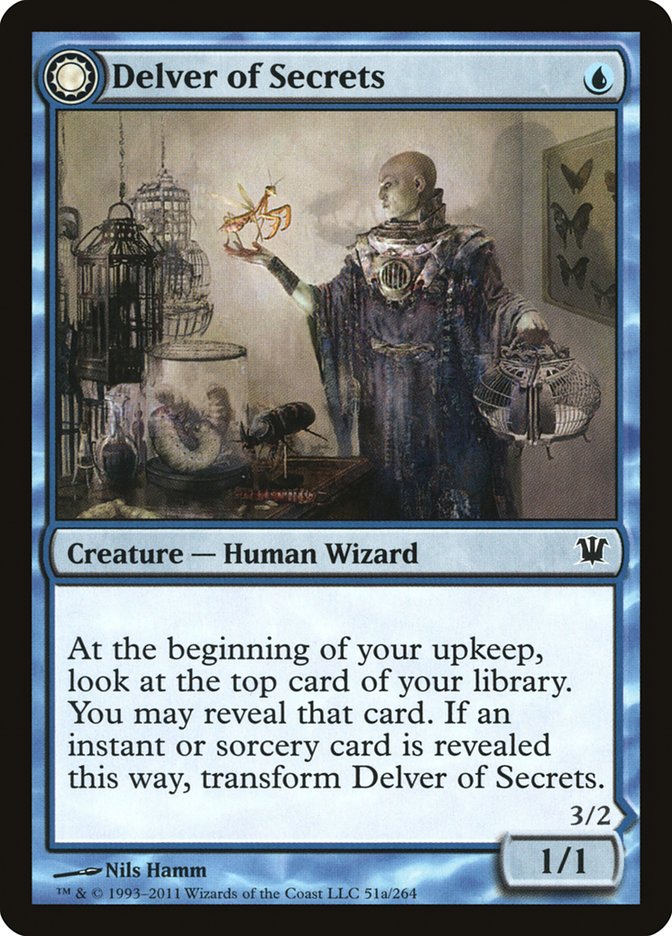 One of the best one-drop creatures of all time.

One of the best blue creatures of all time.

And a very prominent mainstay in Modern.

Blue cards in general have been kind of bullied around by black and green in Modern, especially with the absence of Ponder and Preordain. Even then Delver has proven to be a force to be reckoned with at every point in a tournament.

Choosing a Delver deck is like going into a frozen yogurt parlor. You know you’re getting frozen yogurt, but what you put on it is really up to you and what you like since chances are it’ll be good anyway (don’t you dare tell me you don’t like frozen yogurt!). When Modern was younger, most Delvers were featured in Zoo style aggressive decks, with less emphasis on the tempo theme that many players were used to seeing at that time.

The goal was simple—play the highest damaging, most efficient, lowest maintenance creatures available in the format and couple them with the highest damage, most efficient, lowest maintenance burn spells and setbacks in the format. This simple yet effective formula has given Delver decks the tools to win tournaments since the end of the Blazing Shoal era. The banning of Wild Nacatl also helped push Delver to the top of the one-drop mountain, becoming a suitable replacement and potentially better than its feline predecessor given the configuration.

Today the plan mostly remains the same, but the way in which said plan is executed can vary greatly. Here are the more well-known Delver archetypes:

You see more tempo-oriented spells like Vapor Snag than before along with naturally fitting subthemes like Young Pyromancer and a shallow Faeries shell. There are fewer copies of Steppe Lynx because of how punishable it is to play a ton of fetch and shock lands nowadays and fewer utility cards like Isochron Scepter because Abrupt Decay ruins all the fun. Delver decks are more built toward ending the game at the beginning of the midgame rather than the end of the early game.

Delver decks can really suffer from "midrange problems." This sounds a bit weird since Delver decks aren’t traditional midrange decks, but you’ll often find yourself on the wrong side of your deck in some matchups. Having a ton of Spell Pierces isn’t ideal against a creature-based deck, and having a bunch of Lightning Helixes and Lightning Bolts isn’t the greatest plan against combo decks. A lot of Delver decks these days are also built to maximize their Delver draws, which isn’t inherently a bad thing but is something that isn’t being completely punished right now other than incidental factors. Here we’re going to attempt to come up with some more sturdy builds, builds that have a stronger plan B while still retaining the plan A that Delver decks are known for.

Here are some examples of existing Delver decks:

We can start building and changing up Delver decks by looking at other supplementary colors. Dipping into white or black would be the first step for me. Black offers the ever-popular Thoughtseize and Dark Confidant along with some solid hard removal, and white gives you some power at the top end in Geist of Saint Traft and potentially Restoration Angel:

This build harkens back to the days where U/W Delver was dominating Standard a couple of years back. We have an additional tool to keep the format staples at bay in Path to Exile along with the aforementioned Geist and Restoration Angel. Moorland Haunt gives us a little bit of reach, though I’m unsure if Celestial Colonnade is better or not. We establish a whole lot of tempo game here similar to the Mono-Blue builds, but we push a little bit harder in the board-presence department by investing into ways of taking out their presence as well as up our speed a bit in the midgame. If you’re looking for more punch to your Delver deck, then I’d start with this. If you’d like a bit more drawing power and unconditional removal, I’d go with an Esper variant:

The tempo we gain in this deck is extraordinary. We have a ton of ways of setting the pace of the game right from turn 1 as well as a constant source of cards. The snowball effect of interaction plus cards is much more "in your face" with this build, and because of that your Vapor Snags and Paths to Exile have more upside after the initial couple of turns of the game. That said, all of this comes at a hefty cost—a decent chunk of your life total—which is my main issue with this build.

The aggressive decks will eat you alive if you begin with fetching into a Thoughtseize and then playing Dark Confidant. Yes, Vapor Snag, Path to Exile, and Go for the Throat do help, but it may be worth shaving some number of Thoughtseizes for Inquisition of Kozilek and some fetches for more Seachrome Coast type lands. Esper feels much better positioned against the combo decks than many of the other builds since it has just the right amount of disruption, tempo plays, and closing speed. I’d start here if I were going to build a combo- or midrange-killing Delver.

If you’re looking to maximize your speed, then we can take a page out of the Legacy U/R Delver’s book and port it over.

Unfortunately we don’t have access to the insane burn spells like Chain Lightning, Price of Progress, and Flame Rift, but we still have a ton of heavy hitters in Goblin Guide, Searing Blaze, and Lava Spike. Unlike the burn decks talked about in the last part of this series, you can actually maintain some form of staying power here. Perhaps we can take the Four-Color Burn deck and incorporate Delver there?

Bant is the color combination I’m most excited to try since it maximizes one of my favorite aspects of Magic: board presence.

Here you get the same benefits of U/W Delver but with a lot more sturdiness in Tarmogoyf and Quirion Dryad at the cost of mana-base stability. An unchecked Dryad can easily be a 3/3 or 4/4 the turn after it comes down, and when backed by the already pressure-packed Delver and Geist, things can get rough. I could see Mana Leak taking the place of Remand in the maindeck mostly because you need things out of the way for your ground threats. I can also see Noble Hierarch in some number since attacking for four on turn 2 with Vapor Snag or Path backup or playing a turn 2 Geist seems like a good way to earn some free wins in games where your opponent stumbles out of the gates.

Outside of those builds, it’s just a matter of what you’re looking to lean on. You can certainly combine the elements of each Delver deck to make something that works for you. Grixis Delver can work similarly to Esper and U/R or can resemble a Burn deck. It’s fine as long as whatever plan you do wind up with is executed to its fullest. For example, Thoughtseize, while an excellent card in its own right, probably isn’t something you’d really want maindeck if your Grixis Delver deck is planning to go as all in as possible on the burn.

From there we can get really creative and expand our options to other decks’ tools. For instance, we can go back to the Zoo style decks and jam Delver in there—because why not?

Wait, is that Steppe Lynx in the sideboard?

Well, we did say earlier that Steppe Lynx fell out of favor due to Abrupt Decay being one of the premier removal spells in the format. Having them in the sideboard lets us swap out our Deathrite Shamans against combo. (Not that I think Deathrite is necessarily bad against combo, but I do want Steppe Lynx a bit more. It’s very possible that another card could get cut depending on the combo deck though.) The real question lies on the tension between Delver of Secrets and the spell count. Can we afford to skim a little bit more on the spells if it means adding more power to the creatures?

Eighteen spells is the bare minimum amount if you’re going to play Delver, and oftentimes that’s pushing it really hard. Right now I’d only go down on the spells if it means I can bolster my creature suite significantly. Dark Confidant isn’t really enough; neither is Snapcaster Mage or any other two-drops I can think of. That leaves one-drops.

I pretty much want to rule out most other vanilla two-power creatures at the one, so that leaves things like Noble Hierarch, which is okay but doesn’t really justify the lower chance of flipping a Delver; Figure of Destiny, which is pretty high maintenance; and Grim Lavamancer, which has the same problem as Hierarch. Vexing Devil is something I’d consider, and I’d play the Devil before Steppe Lynx maindeck since the impact it leaves on that turn is pretty high and there’s upside to getting it through with a Might of Alara if they decide to trade a Lightning Bolt for it. The skepticism remains, though, and I certainly feel that it’s close. I’d love to hear what you guys think!

As you’ve probably noticed, there are a few Born of the Gods cards in some of these decklists. Next week we’re going to talk about just that—what cards in the new set I feel will have both primary and supplementary roles in Modern as well as the decks that benefit the most from it. We will also discuss the changes to the banned and restricted list. If there aren’t any, there will still be a lot to talk about, believe me! There will be Gods, devotion builds, and some really strong synergies to be had within Modern and the new addition of cards, and I can’t wait to talk all about them.

I hope everyone enjoys their shiny new toys at the Prerelease this weekend. May you all open four of your favorite God—I’ll be ready to Gilt them on sight!