This weekend’s big winner was Junk…

…or should I say Abzan?

Now that we’ve been in a post-Bloodbraid Elf/Deathrite Shaman world for a while, it’s pretty clear that the format has become more diverse. The good stuff
midrange decks with top notch creatures (Tarmogoyf, Dark Confidant), removal, and discard have really split between three primary styles. What do you pair
with your black and green cards?

● Nothing for perfect mana and immunity to Blood Moon

Taking a look at the winner, Robin Dolar’s list, we see an example of a well-tuned, no frills, straightforward B/G/W good stuff deck:

Seven discard spells goes a long way towards giving us a game plan against combo decks with our overpowered two-drops giving us something to do with the
time we gain from our disruption. Meanwhile, against aggro decks, we support our green creatures and Lingering Souls with an ungodly amount of removal.

Thirteen removal spells in a deck with lots of good blockers and seven discard spells? Now that’s a plan against aggro. What makes it possible is
the versatility of the removal. Liliana can serve as added discard against some combo decks; Abrupt Decay, Maelstrom Pulse, and Putrefy have targets
against creatureless decks, and some of the popular combo decks are creature-based (Twin, Pod).

The sideboards of Modern decks are always really interesting. There are more stonecold killer sideboard cards than you can possibly fit into your fifteen,
so looking for a diverse mix of powerful options with many purposes is crucial. You are often going to play against a different deck every round, and you
want to bring in several cards against everybody. In order to make this possible, you gotta get creative with putting cards to use in non-traditional
roles. For instance, maybe you end up boarding in Obstinate Baloth against control when you have too much removal and just need more threats. Meanwhile, it
fights aggro and burn (life gain), and if anyone ever Raven’s Crimes you…

As you can see, Pierre’s list is very similar, just slightly different tweaks and tuning decisions. Of note, Hushwing Gryff in the sideboard is a surprise
trump to Splinter Twin (ideally waiting to respond to the Splinter Twin, so they end up tapped out and vulnerable). It also beats Murderous Redcap, Kitchen
Finks, Snapcaster Mage, Wall of Omens, Restoration Angel, Primeval Titan, and much more.

It’s kind of cute, the whole Hushwing Gryff/Aven Mindcensor thing. There’s gotta be a deck out there focused on doing that specifically. You know the type.
All kinds of hate, maybe Leonin Arbiters, Path to Exile, that kind of party. Maybe something along the lines of…

I hope Devouring Light works out because we could really go for a lot more removal. Maybe that means we need to add a second color. I know I sure would
love Banishing Light, but Abrupt Decay basically makes that a non-starter.

Jumping back to the Grand Prix, let’s take a look at the Jund approach to B/G/x:

Conceptually, this is basically the same deck, all the way down to one Chandra, Pyromaster as an upgrade to the one Garruk Wildspeaker. The Olivia Voldaren
and Grim Lavamancer give you a way to trump creature decks with Lightning Bolt giving you much needed tempo. The cost? Lingering Souls is just about the
best possible way to fight semi-mirrors, and the white sideboard cards are generally a little bit better than the red ones.

If Junk and Jund are the “normal” decks, the “fair” strategies, I suppose Affinity and the combo decks are probably the “bad” guys. Amusingly, Modern is
definitely a world where we tend to want to root for the bad guys. After all, the Junk and Jund decks are always pretty popular and relatively omnipresent,
while the bad guys of the day change from day to day, week to week, rotating back from time to time, almost like Spiderman villains.

The difference, however, is that Spiderman is the one changing, growing, maturing, making him a compelling character. In Modern, it is the unfair decks
that are often the most dynamic, the most commonly growing and evolving. For instance, take a look at Nathan Jones’ top 8 Affinity list:

So, this is happening: 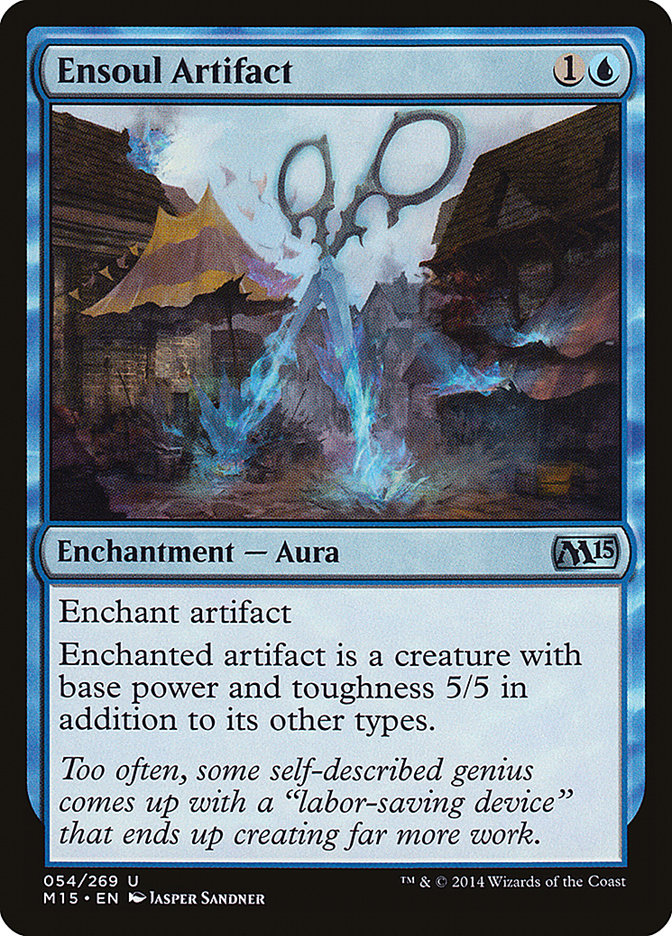 The dream of Ensouling Darksteel Citadel has been discussed widely because of the Standard and draft implications, but the Jones list features fourteen
zero-cost targets ensuring you can get a 5/5 haste creature on turn 2 basically every time. Target a Vault Skirge and you have a hasty Baneslayer Angel on
turn 2. On the
Infect plan? Target your Inkmoth Nexus and get them for a surprise five (just remember that it will fall off at the end of the turn).

One of the nice features of Ensoul Artifact is that it gives you a built-in plan for beating Stony Silence and Kataki, War’s Wage. When you’re on that
plan, you only need one artifact and it doesn’t need to activate. Sure, it’s not super robust if they can beat it, but the game usually isn’t going on much
longer, one way or the other.

Of course, not every unfair deck is going to use sweet new technology to win the crowd over. Not everyone wants to be hero. Some just want to win at all
costs, even if that makes them the target, the deck to beat, the villain.

Of course, there’s a step even beyond that. There’s the worst type of villain, the most evil opponent you could face in a tournament. The type that casts
Blood Moon.

It’s like the one last remaining holdout from an earlier era, an era where it was considered a reasonable play pattern to nearly lock people out of casting
spells so that both you just sit there for a while not doing anything. Affinity decks with Blood Moon deserve the Stony Silence they are treated to.

Of course, Affinity is far from the only strategy willing to sign up for the sanguine lunacy. At least Affinity is fighting against the most absurd hate
short of graveyard decks. A blue deck with Blood Moons? That’s a special type of evil.

The Blue Moon archetype really burst onto the scene at the last Modern Pro Tour after an incredible day 1. It did end up struggling a bit on day 2 of that
event, but it did put one into top 8 and has been a regular fixture in Modern ever since.

Blue decks have struggled to find their niche. They are generally relegated to the “fair deck” department, and they generally just can’t keep up with the
B/G/x decks in terms of raw power. Blood Moon is an attempt to switch teams and fight for Team Unfair.

And you thought Sphinx’s Revelation was evil!

It’s hard to be too hard on Tobiasch though. Keranos, God of Storms in the sideboard? Okay, you win. That’s style, and that’s awesome.

While there are countless unfair decks in Modern, the hate is so powerful, so effective, the most important skill is picking the unfair deck people aren’t
going to be aiming for this week (which is often why we see fringe decks pop up in 2s and 3s, after zero appearances for a while). Affinity is the one
exception on account of just being so much more powerful than the other decks. Affinity faces Shatterstorms, Ancient Grudges, Stony Silences, and the like every single round. That’s just a Tuesday to them. It may come as a surprise to some, but if I played in a Modern tournament this weekend, I would
play Affinity…

As for the unfair deck of the week, this week it was Infect. Community leader and meatball connoisseur Phil Napoli is back on the Pro Tour after his strong
finish with this fairly straightforward take on U/G Infect:

Ever notice how many New Phyrexia cards there are in Modern?

Could Darksteel Relic be #30? That’s another great Ensoul target…

And this doesn’t even count Mental Misstep, which got instantly banned, and how many cards in this set broke other cards, like Batterskull and Stoneforge
Mystic, like Glistener Elf and Blazing Shoal. This set was responsible for the only Standard bannings in nearly a decade. It’s just funny that this set was
printed in the modern era. I guess it just goes to show, every new set might actually be as broken as it looks, it might actually be even more broken than
that. You can never tell in Magic.

As for PNaps’ Infect list, Hunt the Hunter is fun with Glistener Elf, but even a Noble Hierarch can beat the tar out of opposing mana creatures. Add a
Mutagenic Growth and even a powered Tarmogoyf is going down. Beyond that, PNaps has gone with a more diverse mix of pump spells, support cards, and is
generally capitalizing on making it harder for opponents to play around his game plan. Wesley Hovanec actually went the exact opposite route, relying
instead on four-of all the most powerful cards to be as streamlined and consistent as possible.

His big twist was adding black in order to pick up Plague Stinger in the main, and lots of great sideboard cards. What’s really attractive about Hovanec’s
list, however, is how clean it is. It’s literally just fours all the way down, with the manabase being the most simple, most pure execution possible.

With Modern the PTQ format of choice right now, this is a great time to remember that one of the most important skills in Modern is knowing your deck.
Standard generally has so much room to metagame on deck choice, to try to break the format, to get one step ahead. Modern has a much bigger emphasis on
in-game decisions, tactical maneuvering, and pattern recognition.

Want to win a Modern PTQ? The most reliable formula for success is pick one of the top twenty decks that is a playstyle you enjoy, that you could see
yourself playing for a long time, over and over. Then practice it. Practice it as much as you can against every deck you can, every opponent you can. Tune
it and tweak it but no need to reinvent the wheel. Learn the deck and stay with it for the months it takes to master it.

It can be so tempting to switch decks every time a deck doesn’t work out for you, but if the deck you are working with is one of the twenty best decks in
Modern, remember, all of those decks are actually pretty close together in power level. The ball really is in your court to learn the deck better, to
master that style. If you switch decks every week, you are making it that much harder to master these extremely detailed and nuanced strategies.

Okay, Pro Tour Magic 2015 is just days away, so I have to get back to testing with Finkel, Black, Rietzl, the Oath Brothers, and the rest of the Pantheon.
Any predictions on the top 3 archetypes at the Pro Tour?

See you on the other side…