Jund Midrange is the best deck in Standard right now. It’s not exactly what I wanted from M14, but Scavenging Ooze solved nearly all the deck’s problems: added another early-game play besides Farseek, reversed the Junk Reanimator matchup, improved the overall creature quality, and upgraded their ability to gain life. Therefore, you need to be able to beat Jund Midrange to be successful in Standard (or beat those who beat Jund).

A first important note: Scavenging Ooze is better in Jund than in any other Standard deck. A typical Jund Midrange list contains much more removal than, for example, Naya Midrange, and you can only grow a large Ooze if you feed it actively. A deck growing Ooze as effectively as Jund may exist, but all the best removal is in black and neither white nor blue have threats as efficient as Olivia Voldaren and Huntmaster of the Fells. Most Naya decks are creature-heavy and tap out each turn, which leaves no space for casting removal and feeding the Ooze. Blue is threat light—Aetherling is fine, but the lack of Olivia and Huntmaster will hurt your aggressive matchups.

A second important note: Junk Reanimator is far from being dead. Scavenging Ooze hurts it, but the more people realize my first note, the less they play Ooze (at least maindeck). I expect a significant increase of Scavenging Ooze in non-Jund decks soon; combining it with a general hate towards Jund as public enemy number one, you may expect a metagame relatively friendly to Junk Reanimator. That becomes even more probable if non-Jund players oust graveyard hate from their sideboards, expecting someone else to beat Junk Reanimator. Nevertheless, graveyard-based strategies are much less popular than they were before M14, which opens the door for some previously poorly positioned decks (like Naya Midrange).

First, we see two Fiend Hunters, two copies of Putrefy, Abrupt Decay, and Sever the Bloodline in the maindeck. That’s enough removal to deal with a single Scavenging Ooze. Note Sever the Bloodline; it’s a bit controversial to play a four-mana sorcery over a three-mana instant, but opponents won’t have a well-timed Scavenging Ooze every game, so the flashback will be useful from time to time. Sever the Bloodline may be even more important in more “fair” decks since they tend to be weak to Olivia Voldaren and a virtual late-game answer to one is invaluable even if it could be eaten by Scavenging Ooze.

Next, we see a pair of Blood Baron of Vizkopas between the maindeck and sideboard. Protection from black is good against Jund Midrange because it leaves only a miracled Bonfire of the Damned as removal (and you can probably make sure your Blood Baron doesn’t die to Thragtusk and company). The full four post-board Acidic Slimes also help Dustin to shift from the reanimator plan to a mana denial midrange deck full of great creatures.

Note that Dustin’s choice of creatures doesn’t contain Shadowborn Demon (successfully used by Brian Braun-Duin). Shadowborn Demon is an interesting choice of removal since it could be fine early (especially if blinked via Restoration Angel before sacrificing to its own ability) and is great in the late game because the opponent may not be lucky enough to topdeck removal spells fast enough.

Junk Reanimator’s Jund Midrange matchup hasn’t gotten better, but a bad matchup against the most popular deck never prevented the deck from being played in otherwise friendly field. There are no unwinnable matchups; if you feel comfortable with Junk Reanimator, look around—you may get your moment of glory. However, if you don’t particularly like the deck, I recommend playing something else.

I’m not dismissing Junk Reanimator completely, but you should be aware of an interesting move in Standard that could prevent it from emerging once more. There’s a deck that seemed like a bad matchup for Junk Reanimator and good for Jund Midrange. This deck would normally cease to exist in the current environment, but M14 provided the deck with a card able to keep it at the top. You may note an unusual amount of red decks in the Top 16 of the StarCityGames.com Standard Open in New Jersey, and for good reason: Burning Earth.

The card is just amazing against Jund Midrange, which rarely uses more than two basic lands and has no good tools to deal with the four-mana enchantment. However, a Thragtusk is still legitimate without the “gain life” part of its text, and early removal is still capable of keeping Jund’s life total high. So you should be as aggressive as possible to maximize Burning Earth’s effect and capitalize on the fact that the opponent loses life before gaining it back (and thus becomes vulnerable to Searing Spear). An interesting example of this approach can be seen in Christian Calcano’s list from the Top 16 of the StarCityGames.com Standard Open in New Jersey.

The first thing you’ll notice when looking at this decklist is the lack of Boros Reckoner. Yes, the Minotaur Wizard is very powerful, but it isn’t lighting fast. Moreover, Boros Reckoner becomes worse in a deck with four Mutavaults (which are simply great in this deck). To make his deck as fast as possible, Christian opted to play four Lighting Maulers (which you can’t find in a generic red deck now) and even Mogg Flunkies!

Christian’s deck is reliably fast pre-board, maximizing profits from any bad draw from opponents, and hateful without a significant loss of speed post-board with Burning Earth, Skullcrack, and Mindsparker. Due to Lightning Mauler, a lower mana curve, and Mutavault, red decks can avoid complete devastation via Bonfire of the Damned, which is very popular these days.

I don’t expect Mono-Red Aggro to be the bane of Jund Midrange (as you could simply not draw Burning Earth), but it looks interesting and able to shake Standard up a bit. And don’t forget that there are other approaches to Burning Earth, which may be better if the first one becomes popular. One of them is Joseph Herrera’s Mono-Red Midrange.

I touched on this deck two weeks ago, so I’ll just concentrate on this list’s details. It completely lacks Chandra, Pyromaster, which is replaced by Hellrider. The hasty Devil doesn’t fit into the deck’s strategy very well, but something has to be in the four-mana slot. I don’t know why Joseph didn’t play Chandra, but I still think that she should be considered in this deck due to the lack of other sources of card advantage. Joseph’s sideboard contains upgrades to his removal package and a very interesting card that didn’t see much play after being released in Possibility Storm[/author]“][author name="Possibility Storm"]Possibility Storm[/author]. 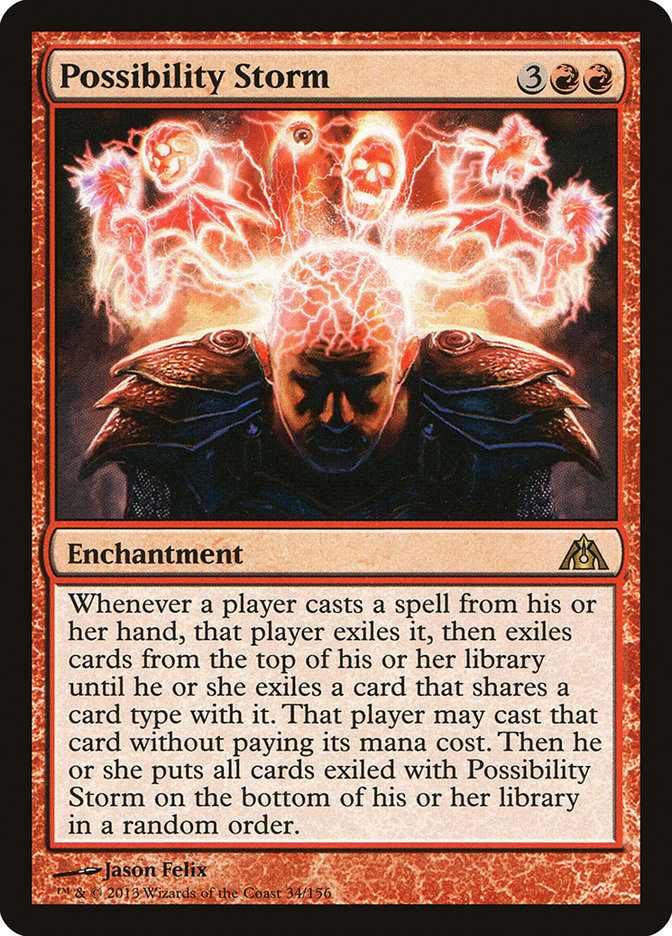 This is an interesting example of a midrange deck that is defensive by default; Jund is the most popular example of this approach, while other midrange decks of our current format are aggressive by default (Naya for example). These decks are built to use the great creatures available right now for any mana cost from one to six. They are probably the main winners from Junk Reanimator’s decline, but there are still some problems to solve. These decks are light on spells and as a result are weak to Jund’s Olivia Voldaren.

The legendary Vampire almost solely prevents Doom Blade from being any good; any midrange deck must include enough answers regardless of colors. Black offers the best options like Putrefy, but even the Jund Midrange mirror is heavily influenced by Olivia (especially with new rules making the first Olivia much better). Red has almost nothing, so you may expect cards like Selesnya Charm, Oblivion Ring, or even Slayer of the Wicked. Innistrad’s Human is a great answer to Olivia and Huntmaster of the Fells—a simple mana cost and relevant body attached to removal—so I expect to see more of it the near future accompanying maindeck Selesnya Charms.

A side note: one of the best anti-Jund Midrange creatures is Predator Ooze (ideally enchanted with Rancor). However, Tragic Slip is fairly popular (and fills the one-mana removal slot in Jund), so you should have more good threats and answers to Olivia Voldaren (a stolen Ooze may ruin your day). I’m working on a Predator Ooze deck right now, and while I’m not particularly happy with the list yet, it could be a good starting point.

Yes, it’s also a Kalonian Hydra deck. The M14 mythic looks powerful but has some problems (the lack of enters-the-battlefield trigger is the most important of them). However, if the opponent doesn’t have a removal spell immediately, the Hydra is deadly. Another centerpiece of the list is Corpsejack Menace; it’s not only superb with Hydra but also fine with Predator Ooze; Varolz, the Scar-Striped; and Gyre Sage.

The two-mana Elf isn’t perfect, but it’s invulnerable to Bonfire of the Damned with X=1, which may be devastating for a 22-land deck with a heavy mana curve, so I’d put it into the deck regardless of Corpsejack Menace.

I’m not sure if Yeva, Nature’s Herald is better than Garruk since the maindeck lacks card advantage and there are no decks vulnerable to a flashy Hydra (if they’re aware of it). Both cards are similar, so it’s probably a matter of personal preference. The second question is Dreg Mangler or Wolfir Avenger. We should be fast, but this deck is incapable of being as fast as a mono-red deck, so little Wolfir may take the three-mana slot. I’m not very happy with this deck, but I am seriously considering it for Grand Prix Warsaw, so I’d be happy to hear any ideas and suggestions.

Why would I consider a deck I don’t really like if there’s a clear favorite? The hardest part of metagaming against Jund Midrange is preparing for the mirror match. The Jund mirror is hard to break and highly dependent on Olivia Voldaren (while being beaten by a lone Scavenging Ooze is also probable). Aside from that, midrange mirrors are usually defined by good sources of late-game card advantage. Jund has access to Garruk, Primal Hunter; Deadbridge Chant; Underworld Connections; and Staff of Nin.

The last, while good in the past, is too risky now due to Putrefy; Garruk and Connections see some play, but I think that Deadbridge Chant is underplayed right now. Remember how bad Jund Midrange is at answering a Burning Earth? The problem of Chant is Scavenging Ooze eating their best cards, but it could be still worth trying. Barring that, I’d pack more copies of Dreadbore to deal with both Garruk and Olivia, and maybe a copy of Sever the Bloodline as an additional source of late-game card advantage (more likely with Deadbridge Chant). The Jund mirror is a strange beast.

I haven’t played Jund Midrange this year, so I wasn’t likely to start when it became public enemy number one; instead, I’m going to focus on beating it before Theros comes and turning over a new page in Standard. There is enough time to solve this puzzle, so good luck to everyone playing and trying to beat Jund Midrange!