Welcome to Part 2 of Meet The Magic Pro League! If you missed Part 1, you can find it here. 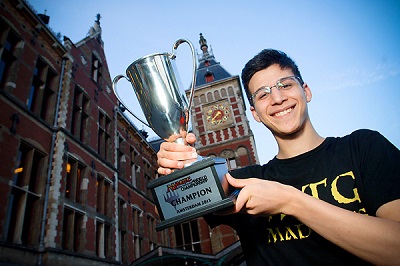 I’ve known Shahar since he was roughly half as tall, and even back then, we knew he was going to be great. He played tempo and control decks that weren’t conventional choices for players his age, and he played them as well as any veteran. Since then, he’s leveraged that early love of aggro-control to forge quite the resume, included four Grand Prix titles and two World Championship wins.

Shahar’s skill is well-respected by the game’s best players but he has tended to underperform at the Pro Tour level. Since nearly falling off the train completely in 2016-17, he’s been back with a vengeance ever since winning Grand Prix Portland and finishing fourteenth at Pro Tour Ixalan. That led to another Worlds Top 4, although Shahar didn’t manage to win this time.

They call it “little kid luck,” but Shahar isn’t quite so little anymore, and we can’t really call it luck for the tenth year in a row.

He seems to find himself in absurd situations, like that time he got Nexus of Fate banned. 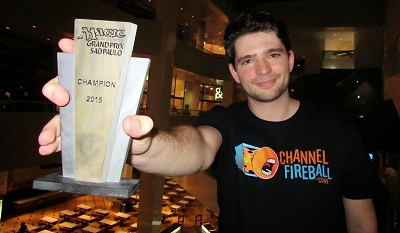 Paulo has demonstrated supreme mastery in basically every aspect of Magic. Over the course of his career, I imagine PV will shatter every single record in professional Magic. While already an incredible notion in general, he’s had to do it while living in Brazil, with few opportunities to play big events locally. If he wanted to compete, he had to pay a much larger cost of time and money in order to do so.

If Paulo lived in the US when he started playing Magic, there wouldn’t be a conversation about who the best player is – we would have already had our opinion.

It’s not difficult to see how PV got here. If he’s attending tournaments, he’s winning.

Paulo’s brilliance truly comes across in his writing. He’s known as one of absolute best writers the game has ever had.

The savage beats from his wife. 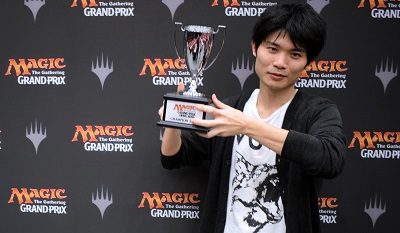 As part of the self-proclaimed “Japanese Peach Garden Oath” (with the other members Kentaro Yamamoto and fellow MPL competitor Ken Yukuhiro), Rei and his team won two Grand Prix last year. Normally that kind of thing is widely publicized, but it seems to have been forgotten quickly.

Aside from that, he had two other individual GP Top 8s and some solid PT performances, earning him just enough Pro Points to sneak into the MPL.

For many people, including myself, Rei Sato was the one question mark on the list. To get my answer, I went straight to Kenji Tsumura.

I guess everyone thinks he is a new player but he has played MTG for at least 15 years. I met him around 2002 at PTQ or GPT and he was a famous PTQ grinder at that time already. I think his first PT was PT Atlanta 2005.

Every Japanese Pro respects him because he has [had] great skill ever since he was young. Though, I think one of his biggest weaknesses was motivation. He has so many hobbies and sometimes didn’t play Magic very much.

Shuhei Nakamura inspires and changes him a lot. Both of them love Poker and they spend/share ton of their time in Las Vegas each year. Then Rei played Magic more and more and he got a lot of chances to show his great skills. Now he plays so many GPs (easily over ten GPs last year), got sponsored (by BIG MAGIC), joined Team ‘Kusemono’ (Shuhei’s team), and spends a lot of time playing Magic.

3) He Wants to Try New Things.

As I mentioned above, he is an enthusiast now and he will start a “Magic Class” soon. He will be a teacher and he recruited ten students in the class and that recruitment was finished within two minutes of announcing it (I didn’t have a chance to apply for that due to the short period lol).

I’m sure he is suitable for the 32 players and will show us something new soon. 🙂“

I knew Shuhei had a buddy he traveled with and played Poker with and I knew Rei from seeing him at a bunch of tournaments, but I didn’t know they were the same person! It all makes sense now.

In Part 1, I mentioned that Rei was one of the MPL players I had never played against, but that isn’t true. We actually played at PT Berlin in 2008 where he (unsurprisingly) trounced me.

Aggro decklists and a lot of photos from his travels, which I wish more people (including myself) would post. 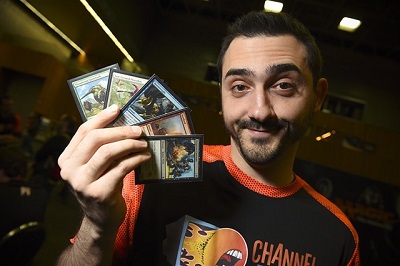 After getting a taste for the professional scene, Martin took advantage of all Magic had to offer and went to basically every Grand Prix he possibly could. He leveraged those Pro Points into several seasons as a Platinum pro and eventually a Hall of Fame berth.

Besides Ben Stark, Martin is the other big Limited expert. Similarly to Ben, Martin is quite good at Constructed as well, although his decks are generally a little “off” from what other people are doing. He isn’t scared to innovate.

You typically don’t see players from other countries joining forces because players will always gravitate towards working with their closest friends. It’s difficult to form those types of friendships when you’re separated by an ocean, but Martin was one of the first to break down those barriers. His travels cultivated many friendships, so now you’ll see him working with Americans more often than with his fellow Europeans.

Despite traveling more than any other Magic player, Martin wasn’t enrolled in any frequent flier programs for a very long time. Once his friends told him what he was missing out on, he was frantically signing up for all of them and trying to get credit for his previous flights.

These days, I like to imagine Martin flying to GPs in style, sipping on champagne, eating a steak dinner, and, of course, drafting on Magic Arena. 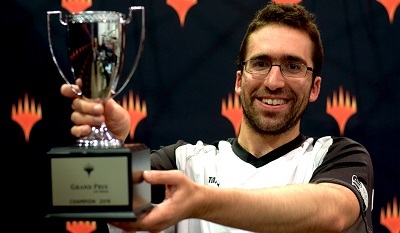 Sometimes you break a format, go on an absolute tear, and get a card banned. I think it’s safe to say that Matt made the MPL this season largely on the back of Krark-Clan Ironworks. With a bunch of excellent Pro Tour finishes sprinkled it, Matt had arguably his strongest season to date.

Matt’s greatest strength may be as a teammate in a GP, although many would say that it’s his deckbuilding. While certainly a strength and an asset on any team, it could also be his greatest weakness. The lure to play an innovative deck is a strong one, but something that Matt has been curbing recently.

Even though he might go off the deep end with his deck selection, his deck-tuning is world-class. You know that regardless of what archetype he’s playing, it’s probably the best possible version of that archetype for that tournament.

If you want to play the hardest game known to humanity, “Guess What Matt Nass Is Actually Playing,” thanks to Tweets like these. 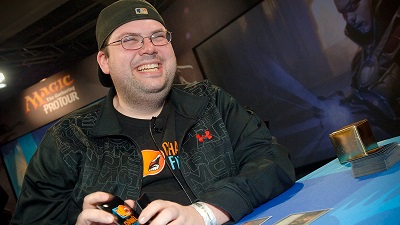 EFro was on track to become one of Magic’s biggest stars in the early 2000’s, but Poker waylaid that for many years. It wasn’t until 2010 that he made a full comeback to competitive Magic and he has been crushing it ever since. 2018 was no different.

EFro might actually have the best BS meter of professional Magic players. While others are focusing on how to break a format, he’s able to quickly and decisively say “That’s not going to work” and move on. It leads to his deck selection being on point, which means his tournaments will always go well…

… except for the few times when they don’t. Magic inherently has variance and Eric used to be quick to point out the unlikely string of events that would cause him to lose. A propensity to focus on the bad side of things garnered Eric a not-so-great reputation.

Since then, Eric has (mostly) shed the negativity. He’s made the Hall of Fame, gotten married, and done well in the World Series of Poker, and he seems to be much happier as a result.

If you were put off by his attitude and hit that “unfollow” button, give him another shot. I guarantee you will be pleasantly surprised.

(He says you can just call him “Romeo,” but somehow I don’t think that’s the correct pronunciation.)

Carlos had some solid results this year, capped off with a Nationals win and a Top 4 finish at Pro Tour 25th Anniversary alongside teammates Marcio Carvalho and Thiago Saporito.

Not only did Carlos put South America on the map with his Worlds win in 2002, but he inspired an entire continent to pursue the Magic dream. There would be fewer card stores and fewer players in South America without Carlos. Players like PV, Lucas Berthoud, Thiago Saporito, Sebastian Pozzo, and Luis Salvatto might not have made their mark without Carlos.

We’re seeing that same boom happen in Argentina thanks to Salvatto’s recent success. The torch may have been passed to others, like Salvatto, but Magic wouldn’t be the same without Carlos. He singlehandedly changed the game.

Like a few others in the MPL, Carlos has an intimidating table presence. Don’t let it fool you. He’s a teddy bear.

Carlos is happy to be here. I don’t mean the MPL, I mean life in general. He will happily crack jokes about Magic, his dogs, his friends, and himself. 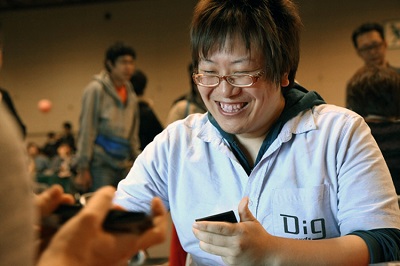 Draft mastery and recognizing the power of Hollow One in Modern carried Ken to the MPL. His decks are typically monstrosities that only he can pilot, but Hollow One was one of the top two decks in Modern for a period, and that’s all because of Ken.

Ken is the epitome of fun – he’s fun to be around, he makes you have fun, and he’s fun to watch play Magic. He practices a lot, takes the game seriously, and is looking forward to the new challenge of the MPL, but he’s going to have a smile while he does it.