Nationals fever continues to roll on this week, with Maximilian Bracht following up his Top 8 in Hawaii earlier this season with a win on home turf. Most people were somewhat surprised to see what appeared to be a homegrown Simic Ninja concoction storming to the top of the pile, despite the deck having some considerable similarities with the deck piloted by Justin Richardson at the Canadian Nationals the week before. However, those in the know saw an mBracht finish in the Top 4 of a 59-player Standard Premier Event (losing to Hand in Hand), with what appeared to be the very deck he ended up taking with him to Aschaffenburg. It’s not secret tech when you know where to look for it.

The Simic Ninja deck wasn’t the only rogue creation floating about the PE’s this week. While the top end has been solidifying itself – eleven of each Solar Flare, Magnivore and Hand in Hand lol – the Mono Green deck and the Dimirtron decks were back, and were even joined by a couple of burn decks. There were only nine Standard Premier Events in the last week, and here is the recap.

mBracht isn’t the only Modo’er to be seen to be doing well this Nationals season either. Rumor has it, that the legendary Clan: DRAGONQUEST holds not one, nor two, but three newly crowned National Champions, from Australia, North America, and Canada. That’s an incredible performance, and only adds credence to the idea that today’s top Magic Online clans are the Deadguys, Tongo Nation, DK;LA and so on of yesteryear. That could lead to some interesting pairings on the fourth day in Paris, chuckles, chuckles.

Continuing on last week’s theme of my Nationals that I can’t really remember, here is some more randomness in that line of thought. They say a picture is a thousand words, so I guess it’s lucky these are pictures and not words, because then this would be really long and boring.

First up, there are my draft decks. The first one I felt was somewhat of a failure, simply because I ended up purely in Green/White with no splash, which is precisely what I’d hope to avoid in a RGD draft. Well, more like I hope Green/White isn’t one of the color combinations in my deck, I had no idea it was possible to draft a two-color deck in this format. I guess the trick it to make sure that people can’t hold a candle to your combat phase. 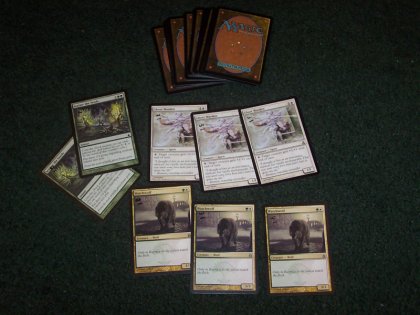 My second draft deck I felt was an unbelievable failure. Like nothing I had ever drafted before, including the first time I ever cracked a pack in a sanctioned tournament. Basically, I got cornered downwind of someone drafting Green/Black/Red, and upstream of someone in White/Black/Red. At that point, you’d think I was in a prime position for Blue, but the only real Blue cards I saw at any point in the draft was a couple of Simic Growth Chambers. Yes, those appear in the last pack only. Anyway, the draft went so badly that I spent the rest of the evening in a complete funk. I played games against the guys I traveled with, wining only one game when my opponent couldn’t be bothered mulliganing a hand you wouldn’t think twice about when on the dance floor. The only reason I made it out of that Draft pod alive was that the only person not at least on 5-1 at the start of the pod dropped before the ninth round to play in the PTQ, and I got the luckiest bye to ever exist.

Here is a picture of the deck. 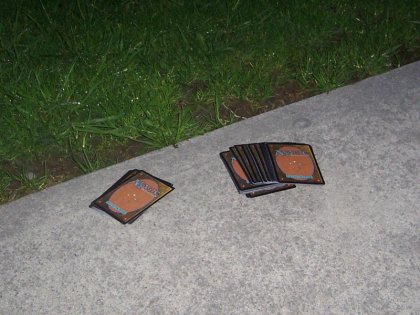 Notice how there are no cards facing up this time, like with the last one. Also, do not be alarmed about the fact that this deck appears to be sitting on concrete and outdoors and stuff. I would never let harm befall cards of mine. 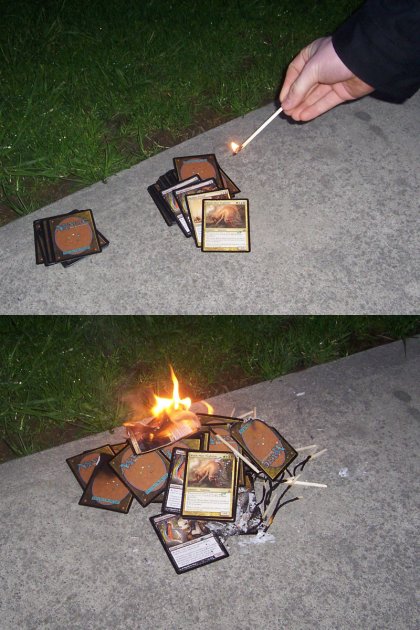 Okay, I lied. That piece of crap deck can burn for eternity for all I care. If I am ever unfortunate enough to ever be on the receiving end of another draft deck like that one, I will personally feed myself into a woodchipper. That’s how bad that deck was. Note the pair of Vesper Ghouls, which were key components in trying to make it suck less. 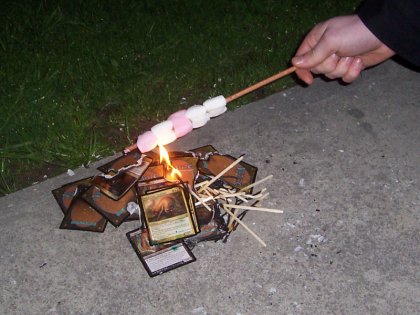 I would like to say that the deck finally served a purpose, but it was just that bad that it wouldn’t even burn properly. So we couldn’t even have toasted marshmallows.

This is all the damage we could muster with fire, so the only option we were left with was giving up. The cards are still outside now. I’m trying to let nature teach them a lesson or two about biodegradability.

I spoke briefly last week about my Standard deck, which is actually really Yann Hamon deck, and how it was pretty much a last minute audible away from playing Solar Flare that lead us to be playing with wee free men instead. In the week leading up to the trip, Dave and I were discussing ideas about what could or should be run maindeck and side of Solar Flare. We found a wee whiteboard and used that to record possible options available to us so that one of us could peruse the list while the other was at work, sleeping or just plain being a slacker. Sadly, the decision to switch to Zoo was made at the last minute, so this isn’t quite as cool as it could have been, but once we got home again and I emerged from my coma, I found Dave had made some post mortem changes to the Solar Flare list. 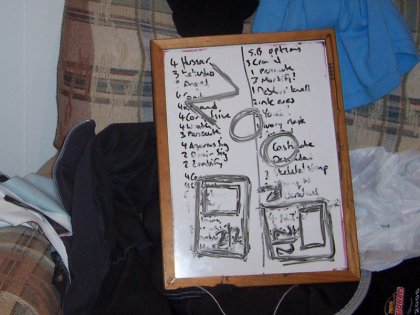 Obviously by this time, we had both made the top 8, or in Dave’s case the Top 4 with the Zoo list, and we quite enamored with the idea of attacking people down to ten life on turn 3. Just to finish this wee photographic trip down fragmented memory lane, here is a picture (taken by the enigmatic Tall Mike) of the four of us local gents once we’d found out we had made the Top 8. 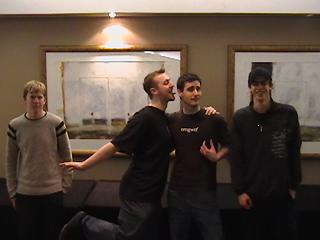 Yes, Dave is trying to lick me. There was another shot taken of me trying to lick him, but apparently it didn’t’ turn out. Don’t ask what I am doing with either of my hands in that picture either.

Anyway, to finish off, the price list for this week!

The numbers shown, for instance, as 2-4, are the price people are buying the card for, followed by the price people are selling the card for. The prices shown in parenthesis, like this (2-4), are the prices from last week. If a card and its prices have been bolded, it’s because there has been a change in price from the week before to help you differentiate those cards from the others that are a little more… static in their movements. Card prices are in Tickets, because that’s what most people buy and sell with on Magic Online. Also note that prices can fluctuate based on the time of day as well, depending on just how many people are online selling at the time. Due to my uniquely antipodean location down here in the Pacific and my tendency to hold down a regular nine-to-five job, the prices below end up being more of a general indication of what’s going on than an exact science.

But some people are charging three for Persecute! zomg

Despite coming up a ticket in the buy department, I still think it’s time Magnivore and Wildfire bowed out of the charts, much like Heartbeat of Spring and Early Harvest did before them. Sure, they are heavily played, but they sure as hell don’t move in price! Well, outside of this small change, but that can be attributed to the fact that Magnivore is very good against Solar Flare.

Some of you maybe wondering why Coldsnap prices haven’t been integrated yet, so I’ll just remind you that we need the prices to settle a little bit the can get added. For the sake of comparison, I checked Ohran Viper. People were offering to pay anywhere between six tickets and ten, and people were asking for between fourteen and eighteen, not particularly stable at all. So until next week, be nice to small animals.