Over the past month Wizards has given us three Standard Grand Prix. Even though I was unable to attend any of them, I still consider this the greatest Christmas present of all time (well, besides the love and support of you wonderful guys and gals). Many new decks and technologies emerged from these events, and today we are going to take a look at what the strongest decks in the metagame are. I may be on a diet, but it doesn’t mean we can’t indulge ourselves every once and a while. Plus it’s the Las Vegas Invitational week! Let’s talk Magic Candy!

Mono-Black Devotion has been one of the most powerful decks since Grand Prix Louisville, but something unique happened to force it to start splashing another color. It’s not because other decks could adapt to the monocolored deck or that this is strictly the more powerful version. It’s because black has the most self-hate cards in the format.

It’s interesting to me to see Mono-Black Devotion start to take on other colors while Mono-Blue Devotion stays the course. It would be nice for all the blue mages out there to find cards that are strictly good in the mirror to gain an advantage, but they have the luxury of those cards also being good in other matchups. Up to this point cards like Cyclonic Rift and Domestication were also good against the rest of the field given the amount of other devotion decks in the format. Mono-Black did not work this way.

The best cards against Mono0Black are very linear, like Blood Baron of Vizkopa and Dark Betrayal. When these cards get added to the deck, they increase the numbers in the mirror but slightly lose value in other matchups. This has to happen however since being good in the mirror is important.

The inclusion of Blood Baron of Vizkopa isn’t really that bad. Gray Merchant of Asphodel was a strong card in the deck, but the format has picked up in speed. This means that it is much more difficult to find the time to get the black mana symbols onto the board while also interacting with the opponent before it’s time to drain their life total. I found myself constantly playing Gray Merchant of Asphodel on an empty board due to needing every turn to kill creatures or having my opponents kill mine. Blood Baron of Vizkopa allows the deck to not only spend it’s time killing creatures but still put a big threat on the table.

Last Breath is also a nice inclusion to the deck, allowing it to have a removal spell that kills Frostburn Weird, Pack Rat, and Nightveil Specter. With the format being so reliant on small creatures, removal spells like this go up in value. The reason for Last Breath being so good is the same reasoning I had when working on U/B Devotion last week.

The deck also can go late with cards like Hero’s Downfall and Underworld Connections. There will always be decks better positioned for a week or two, but you won’t go wrong for an entire PTQ season playing some flavor of this wonderful chocolate.

#2: Whatever Huey Is Playing (U/W Control)

Last weekend Huey did the unimaginable. Not only did he conquer Mother Nature, but he showcased the true power of an Andrew Cuneo decklist. To be honest, the only proof that I have that this deck is Andrew’s is by looking at it. Maybe I should have done my research before I claimed it to be his, but what the hell—I’ll take a shot in the dark. The reason I say that is because of how few win conditions are in the deck. With only one Elspeth, Sun’s Champion; two Mutavaults; and three Jace, Architect of Thoughts, the most important card in the deck becomes Elixir of Immortality.

In my opinion, this strategy works once. Now that it’s public information that this deck has so few win conditions, players might actually attack the Elixir of Immortality with Thoughtseize instead of Sphinx’s Revelation. I say this not because it’s a reasonable thing to be afraid of but because mere mortals should not play so few win conditions. Huey is a freak of nature that’s capable of making a high number of plays at a lightning-fast pace. This is needed when playing this deck because you might have to activate the Elixir up to five times in a match to win. I know I would not be capable of playing this deck without getting too many draws or losing due to rushing myself.

This isn’t the only version of U/W doing well. Joe Lossett ended up taking down the Standard Open in Oakland this past weekend with his take on the control deck.

Even though he’s also on Elixir of Immortality, he still decided to play more win conditions. Elspeth, Sun’s Champion plays many roles against the aggressive matchups. It mostly acts as a win condition but can also produce enough chump blockers to stabilize or even kill off pesky threats like Stormbreath Dragon. This planeswalker seems much more powerful than Aetherling right now given the number of control decks running around. This might shift soon, but I wouldn’t count on it for the Invitational.

I am in love with this version of White Weenie! It was important to play Boros Charm in this deck a month ago, but many of the Supreme Verdicts left the format. This meant the deck had an answer to a problem that was non-existent. It was easy to ignore the fact the White Weenie didn’t need the card anymore due to how powerful just dealing four damage was, but Luis Scott-Vargas and crew found the diamond in the rough known as Orzhov Charm. 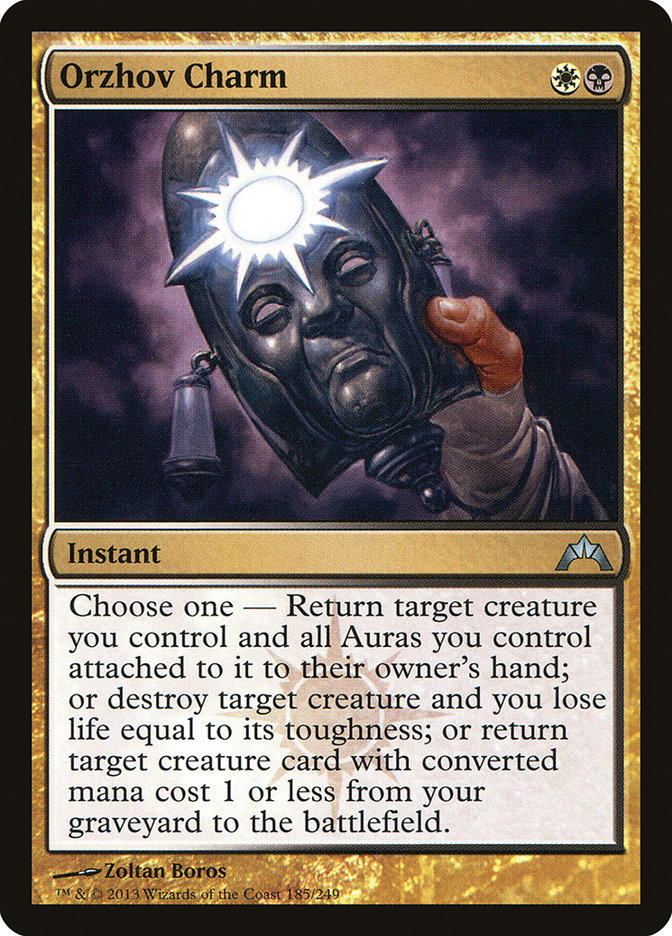 This removal spell is perfect for a deck like this. Not only does it kill every creature, but the downside of losing life isn’t that relevant. Sure, some games will come down to those couple points, but for the most part it will just be a removal spell that has the added bonus of returning a one-drop to the table when you’re applying pressure. This helps against U/W Control decks when they cast Supreme Verdict. I’m always in the business of making my cards work harder than normal, and Orzhov Charm fits the bill. 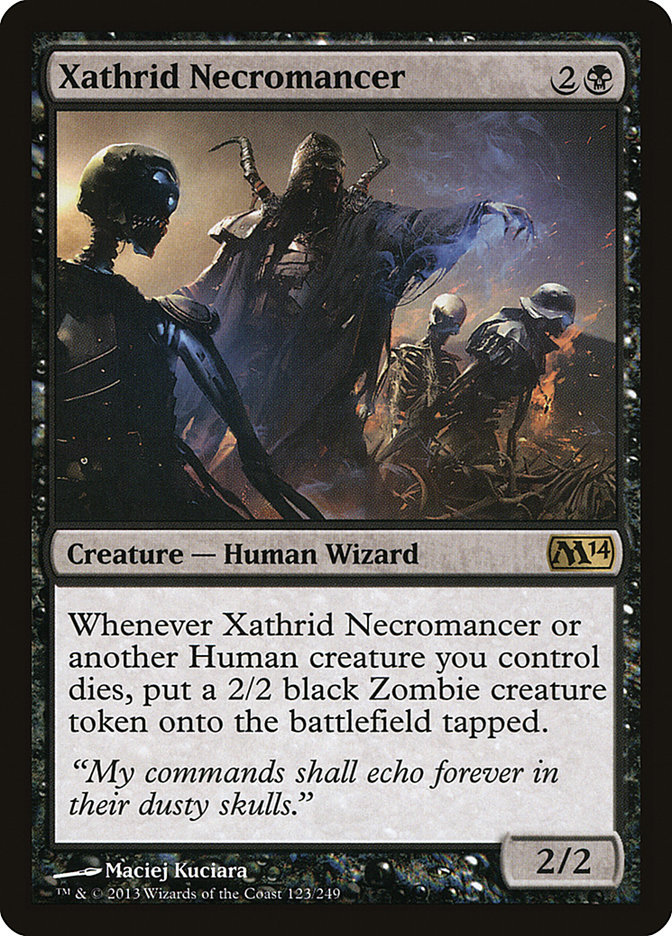 Xathrid Necromancer is also an interesting card in the deck. Obviously this guy helps out against Supreme Verdict, but the added bonus of always being able to keep a Desecration Demon at bay is a luxury most other aggressive decks don’t have. It’s also nice that many of the deck’s creatures are Humans, allowing you to cast the black creature and swing in. Sure, an opponent can trade, but this will leave a few Zombies to help clean up the rest of the game. They don’t have to Brave the Elements if they are already dead!

Pretty much every Mono-Blue Devotion deck is within five cards of each other. Those slots tend to be personal preference or metagame calls, but you can almost always predict what they have access to each time you play the matchup. Even though this is the most predictable deck in the format, it does not make it any less deadly. This deck has proved to be one of the most consistent since Pro Tour Theros and will always be a tournament staple until someone finds a way to maindeck four Skylashers and get away with it.

The reason for this deck’s dominance is it’s the most consistent deck that tries to “snowball.” Once Mono-Blue Devotion finds a chink in an enemy’s armor, it will spend the rest of the game trying to exploit it. Whether it’s a weakness to fliers, card advantage, or an opponent’s inability to surf, this deck is deadly when an opponent can’t fight on a specific access.

The games this deck loses tend to be those where it didn’t get any traction in the early game and now the snowball effect goes in the opposite direction. This is why the deck leans so heavily on Cyclonic Rift to help catch up in those games.

This is the deck I would suggest if your local metagame does not have many Sphinx’s Revelation decks in it.

Last but not least on the list of decks I would play this weekend is Naya Control. This deck was great at the last Invitational, and there really isn’t a reason for it not to be good now. The format shifted around a couple times, but it has rested in a very good place for this deck. Even Esper Control players are shaving a color, making the matchup that much better since Thoughtseize and Hero’s Downfall were some of the more threatening cards.

This deck is only good when everyone is playing devotion-based decks or other permanent-based aggressive strategies. Anger of the Gods is extremely powerful right now, and this is the best deck to cast it. The deck leans on sixteen removal spells in the main with a couple more in the board, and it has a ton of ways to gain value as well as keep a good board presence.

Bramblecrush is what Sunhome Guildmage always wanted to be. Not only does this card help with pesky cards like Jace, Architect of Thought, but it’s crucial in the war against Underworld Connections in the Mono-Black Devotion matchup. I wanted to find a card that would force Mono-Black Devotion into awkward spots when it was in my hand in combination with Assemble the Legion. Both of these cards crush Underworld Connections, making it difficult for an opponent’s Thoughtseizes to be too potent.

The two Boros Reckoners are in the sideboard to help out in the early game against white-based aggro. Oftentimes you would get stuck going one-for-one with removal when you didn’t draw Anger of the Gods and be forced to take damage from one creature plus a Mutavault. Boros Reckoner gives the deck more creatures that help force the opponent into awkward positions when trying to attack but not overcommit to the board.

Alright, ladies and gentlemen, I am going to go back to testing for the Invitational. There has not been a tournament this important to me in a long time. After a month of hardships and revelations, I am happy to announce that every fiber in my body will be trying to go back to back. I don’t know why getting another token is so important to me right now, but I just want it.

Sorry for all of you out there that are not content providers for StarCityGames.com and also competing this weekend; I’m going to do my best to keep it in the family!