Searching your library has been one of the most powerful effects in Magic since the very beginning, when Demonic Tutor was printed in Alpha. Whenever a new way to find exactly what you need comes out, it has to be overly restrictive or expensive to not see play.

This really isn’t a question with my preview today. The class of cards it finds is so broad that it covers almost every effect in the game. Beyond being fairly costed, it actually generates mana.

Of course, there’s also the fact that it is currently a staple of a non-rotating format and has seen play in multiple Pro Tour finals. That might be the other dead giveaway. 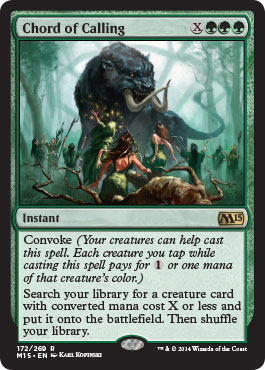 There are some obvious requirements to playing with Chord of Calling, but again we already know they are well worth the price.

First of all, you need cheap creatures. The idea with Chord of Calling is that the additional three mana you would have to pay is a big up-front cost, but you can make it back plus some by using the Convoke mechanic. In order to do that, you need multiple creatures in play, and paying a bunch of mana to get those creatures in play in the first place does not yield a good return on investment. These creatures should also probably be green, both because they make the triple-green mana requirement on Chord easier to hit and because the triple-green requirement makes you play a bunch of green mana sources.

These cheap creatures also have to be things you won’t feel bad not attacking with. Attacking with your Loxodon Smiter and Fleecemane Lion is likely producing more than a mana’s worth of value. In the past we have been spoiled with cards like Wall of Roots, but if Pro Tour Journey into Nyx told us anything it’s that green cards don’t really have to attack in this format to be good. I expect Courser of Kruphix to only get better alongside Chord.

We’ve established how to actually cast the card. Now we need something to find. What exactly are we looking for?

It has to be a creature, and it likely costs six at the absolute most. As much as I want to find an Archetype of Endurance, that would typically require eleven permanents in play (be they lands or creatures) even counting Convoke. That just isn’t happening in a format with Supreme Verdict.

You can do this in one of two ways.

You can be the toolbox deck. You have a bunch of uniquely-powerful yet conditional cards, and your tutor finds whichever one is the most absurd when you cast it.

But you don’t want to actually be that deck.

Vampiric Tutor was never the best when it was being played in The Rock. Birthing Pod for Thragtusk was not the height of the card’s power. Survival of the Fittest was not banned in Legacy because it could find Qasali Pridemage.

Tutors are made to combo.

Luis Scott-Vargas won US Nationals using the card to assemble the “Pickles” combo of Vesuvan Shapeshifter and Brine Elemental.

Tim Landale made the semifinals of that year’s Magic Scholarship Series Championship using the card to assemble the combo of Saffi Eriksdotter and Crypt Champion to create infinite enter or leaves the battlefield triggers.

Matej Zatlkaj made the finals of Pro Tour Berlin with the card in his Elves combo deck.

And most recently the card has been used in Modern Birthing Pod lists to assemble both the Melira-Viscera Seer-Persist and Kiki-Jiki – Deceiver Exarch combos.

If you are toolboxing in addition to comboing, it just happens that sometimes the cards you find work out to be game-ending. Oftentimes these card are drastically better at instant speed, like Orzhov Pontiff. Regardless, what you find should win the game.

So, what exactly are we finding in Standard?

Sounds like that’s your job. I’m just here to spoil the cards, not spoil the fun of breaking it.