Last weekend I got to go battle in a 2HG prerelease event, and I had an absolute blast.

Nothing is better than getting to play Magic with good friends. Topdecking a Stormbreath Dragon for the win is pretty sweet too, but that’s a different
kind of feel good.

Much like previous core sets, M15 seems like it’s all about pressing advantages, getting every little bit out of each card, and not exposing yourself to
too many tricks that can blow you out.

2HG is obviously a bit different from regular sealed, but just from the little bit that I saw and learned from building and playing M15, I really enjoyed
the sealed format. I noticed some things, and I wanted to go over them with everyone! 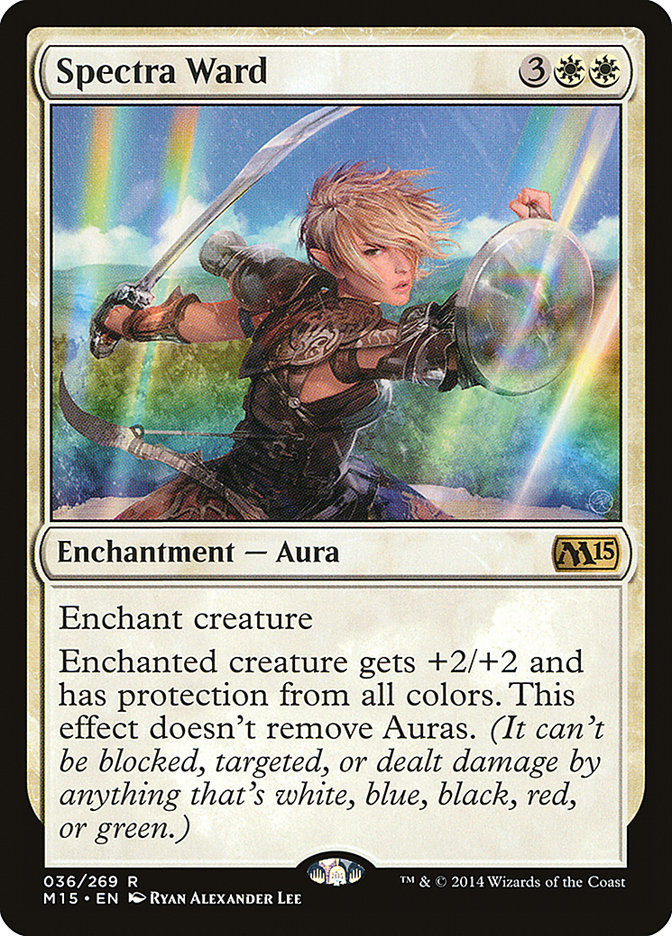 We had Spectra Ward in our sealed pool, and it literally won us every single game that we played. One game we just put it on a Generator Servant and
attacked for four every turn. Another game we put it on a Constricting Sliver, allowing us to attack for five every turn, and it kept us safe from letting
them get their creature back. In the last game, we were both pretty choked on mana, so we just put it on my Child of Night and raced.

The card was much better than I thought it was going to be. A creature that can’t be killed in this format is unbelievable, but it seems like
auras in general have the potential to be very good. There are only four non-rares that can answer a Spectra Ward, or any aura in general.

Reclamation Sage is definitely maindeckable, but Naturalize isn’t something that people are normally happy to be playing in their starting 40, but after
playing in the prerelease, I think that it’s going to be the mainstream thing to do.

Heliod’s Pilgrim is a common and Boneweaver Giant is an uncommon, so if they have a bomb enchantment like Spectra Ward, you can expect them to see it.
Spectra Ward isn’t the only one that’s actually good. There are quite a few awesome offensive and defensive auras that are going to be seeing a lot of play
during the life of M15 limited.

Oppressive Rays is probably even better in this format than it was in Theros Block limited. The “looter” costs four mana to use, and the creatures quickly
go from being mediocre to large. Choking them on mana is going to be an advantage that can be pressed, and with it only having a cost of one, it will allow
us to continue to put pressure on our opponents while also furthering our board development.

Hammerhand is an awesome way of pushing damage through. It’s particularly awesome with Boneweaver Giant since it gives the creature haste. Even putting
this on something as small as Sungrace Pegasus will be pretty boss.

Inferno Fist is a another great way to continue to pressure the opponent, and it can make combat pretty miserable since you always have an additional two
damage that’s just sitting in play. I particularly enjoyed putting this on two or three mana flyers, or any random 2/3 for three.

Marked by Honor is playable, but I would try not to unless I had an absurd number of Heliod’s Pilgrim.

Encrust is a tutorable removal spell with Heliod’s Pilgrim, which is always a nice thing to have access to–especially in a U/W deck.

Stab Wound is just as good as we all remember. Thankfully, it’s uncommon now so we don’t have to worry about crazy numbers of them, but being able to find
them with Heliod’s Pilgrim is pretty sweet. In the game last weekend that we had a Spectra Ward on a Child of Night, we also put a Stab Wound on our
opponent’s Wall of Frost. We had a plan and we were sticking to it.

They eventually had to Void Snare their own creature. That felt pretty sweet.

Caustic Tar is the last aura that I wanted to touch on. Having a way to find this card gives you a pretty sweet way to present inevitability in a stalled
game.

2.) The set is pretty tricky

There are a lot of combat tricks in M15, be it pump spells, hard removal, soft removal, or direct damage, so there is a lot to play around. This is only
exacerbated by the fact that convoke is a returning mechanic and is available on a handful of them.

Those are four common removal/pump spells that you’re going to see coming, but with convoke there are some that you might not see coming at all:

The ability to play these spells with convoke is very powerful and allows you to out-tempo your opponent by continuing to develop your board and pressure
them while still being able to hold up for a removal spell. One card that plays well with Devouring Light is Triplicate Spirits. I figured out very quickly
last weekend that Triplicate Spirits was likely the best common in the set, and there were a lot of games where we had out three creatures and were able to
tap six for Triplicate Spirits, then convoke a second one, and then use those three spirits to use Devouring Light when they tried to pressure us since we
had so many tapped creatures.

There are also a couple bounce spells. We have moved away from the old fashioned Unsummon, and Disperse is now gone, but Peel from Reality is back so watch
yourself. Don’t get buried by this value-monger. Void Snare is a new spell that allows them to bounce any nonland permanent at sorcery speed for only one
blue mana. Be aware they can bounce your Spectra Ward and counter it on the replay!

Giving your opponent the least number of possible ways to crush you with these kinds of tricks is going to go a long way towards giving you chances to win
your M15 limited games.

3.) Evasion feels like it’s more important here than ever.

In the games I played last weekend, and even sitting here and thinking about the majority of the commons and how games are going to be playing out, much
like core sets of the past the ground is be stalled. There is an overabundance of 2/3s which isn’t going to be leading to a lot of trading in combat. This
puts evasion at a premium.

There are quite a few creatures with flying that are obviously going to see plenty of play.

These are all cards that we’re going to be seeing a lot of. Giant Spider is usually there to help us, but this time we get something a little different
with Netcaster Spider. It’s a bit worse on defense against ground creatures than Giant Spider was, but now we have the ability to trade with X/4 flyers.
This is something that the Giant Spider decks have always struggled with.

Because evasion is important, there are two creatures that I think are going to stand out as we play this limited format a bit more. 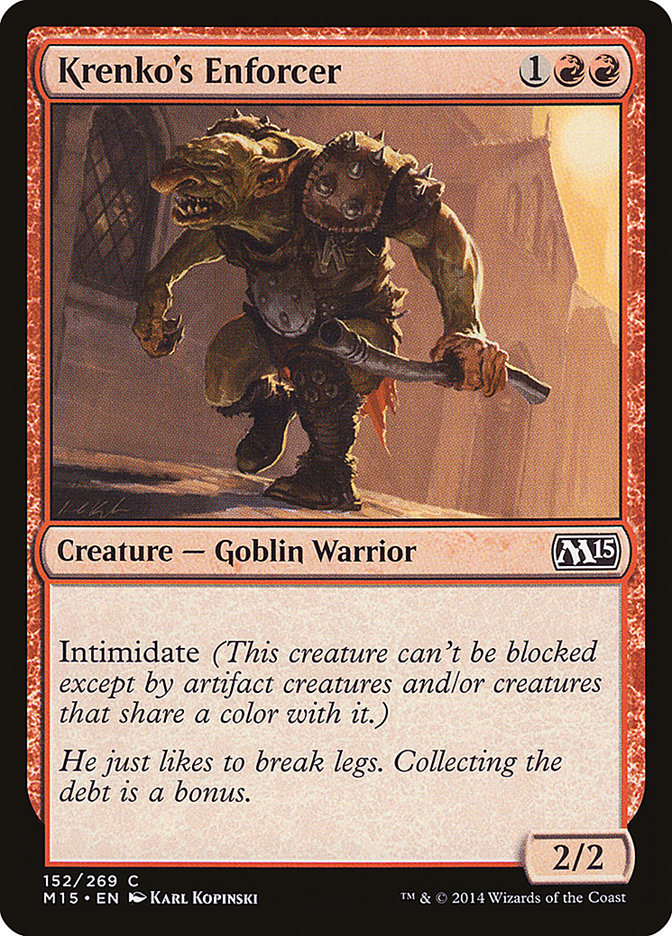 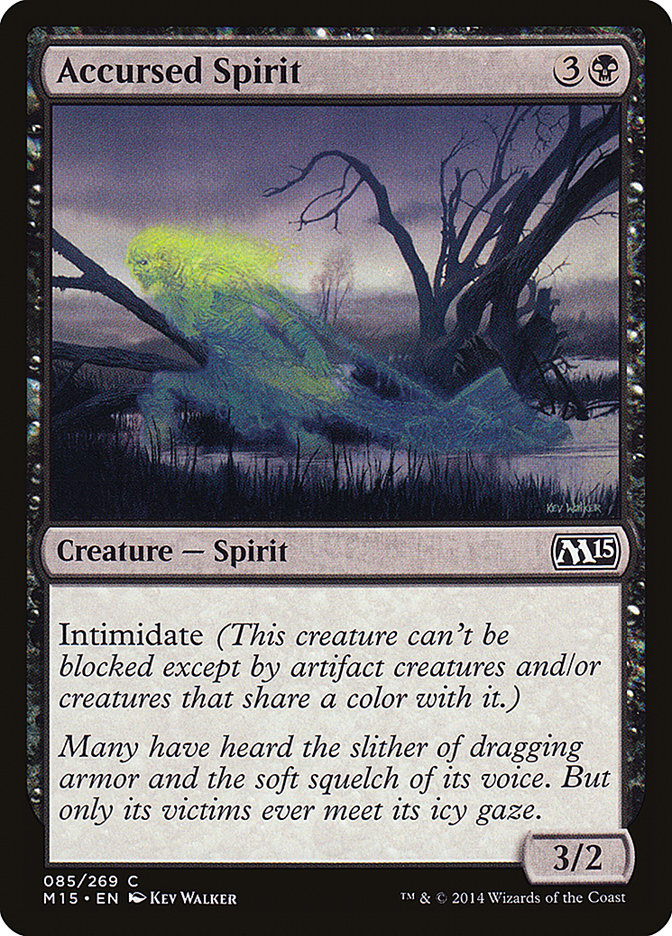 The only real strike against them is they reprinted Bronze Sable and Gargoyle Sentinel, and Will-forged Golem is very good, but I still feel like we’re
going to end up cursing our opponents for playing those two creatures.

There are fifteen mythics in this set, and besides The Chain Veil and Sliver Overlord, they are all absurd. You have six planeswalkers, the six Souls, and
Perilous Vault. If you happen to open a mythic, congratulations, build around it.

Normally there are more than two stinkers at this rarity, but with two six card cycles at mythic, you don’t have a whole lot of room after that.

A lot of the rares are creatures and have flying, some with powerful effects like resetting your life total or giving you four 1/1 deathtouch flying
tokens. With the sheer number of powerful rares, opening them is going to be very important, because the odds that your opponents have one is usually going
to be quite high.

This leads me to my next point that I think that the counterspells are even more playable in M15 limited than they were in M14. Dissipate and Statute of
Denial will probably end up seeing a fair amount of play and become more and more popular as we continue to play M15 limited to see just how frequently our
opponents are casting five, six, and seven-mana bomb rares.

Every core set I end up playing a lot of sealed and draft, and whenever anyone asks me what they should do to break into limited Magic, or even just get
better at Magic in general, I always recommend core set limited. The format is all about good fundamental Magic. Combat is extremely important, as is
card/threat evaluation. Limited Magic in general helps teach you the importance of racing, threat assessment, and using every resource, but I always feel
like in core set limited all of those things are even more important.

This weekend is the first Open weekend with M15 legal, and I’m ready to battle. I haven’t played in an Open since I locked up my Season Two Qualification
for the Players’ Championship, but I’m ready to sleeve up and play again. There is a pretty good chance that I’m just on Jund Monsters again, but I’ve been
working on a couple other decks that I think have the potential to be very good especially in the first weekend of the new set.

Make sure you stop by and say “hi” if you happen to see us in Balitmore.

Lastly, I want to talk about my Kickstarter campaign that is
currently running. I launched it last week on Tuesday evening to go along with my article for the week, and by Friday my initial goal was met. I am still
blown away with all of the support that everyone is giving the project, and the interest in the Beard Power shirts is exceeding my initial expectations.

All that being said, we’re not going to stop here. I have updated the project with stretch goals, and the big daddy of them all has been generating quite a
bit of interest.

You all read it correct. If we are able to reach $5,000.00 then anyone who backed at least $25.00 (which is the level to at least get your very
own Beard Power shirt) will receive a special BBD/CVM playmat that we are working on. We’ve wanted to create a playmat for a while now, and this would be a
great opportunity to get one made..

Thank you for all of your support, and hopefully in the next three weeks we can hit some of those stretch goals!

See you in Baltimore!