Love your neighbor as yourself.

Drafting is more than just discerning the best card for your deck in the vacuum of the current draft. There isn’t an objective pick order for every possible permutation of draft decisions that will work for everybody. We all have strengths and preferences, and nobody plays this game perfectly. One of the best ways to improve is to tailor your approach to the draft with these preferences in mind.

Self-evaluation is important for more than just improving your technical play. Do you tend towards aggressive decks or controlling decks? Do you have any color preferences? Weird niche strategies that tickle you just the right way? The more questions you can answer about what you do and don’t like regarding Magic: The Gathering, the better you can sculpt your own experience. 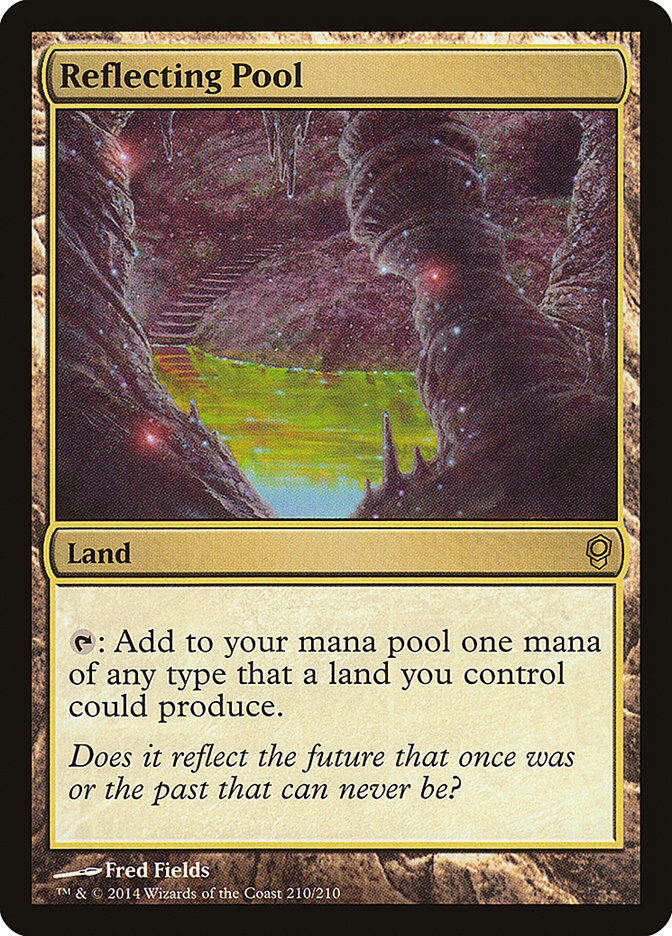 A common piece of advice I hear about these tendencies is to understand them in order to suppress them. And while, yes, suppressing potential bias can be important, I don’t advocate smothering your natural affinities. When you properly harness these tendencies, you not only increase your enjoyment of the game but also see better results.

For example, while Ixalan is considered a fast format without much room to durdle around, there are a handful of players who have had success with multicolor control decks. These decks play to these players’ strengths. They are not only going to pilot them better, but they will also make better decisions during the draft because they are more knowledgeable about the intricacies of these kinds of archetypes.

Today, you’re going to learn how to harness and nurture your preferences! So before I go on, take a minute to think. What are some of your preferences and strengths as a Magic player?

The way that I like to think about drafting is a little math-y.

Every card is assigned some weight, and you pick the one with the highest value. These weights shift as you draft more cards, since every card needs to be compared to what you have already drafted. For example, once you have solidified into an archetype, let’s say U/R, then the weight of green cards become zero, as you shouldn’t be picking them at all.

Pick orders are just sorting cards by these weights, and it’s why they don’t really work after the first couple of picks of any draft. But if you have a good understanding of how you like your drafts to go, you can alter your pick order to optimize for your preferences. This is not to say you just force an archetype if you love it, but it does mean that can put a higher value on cards that are better in that archetype. 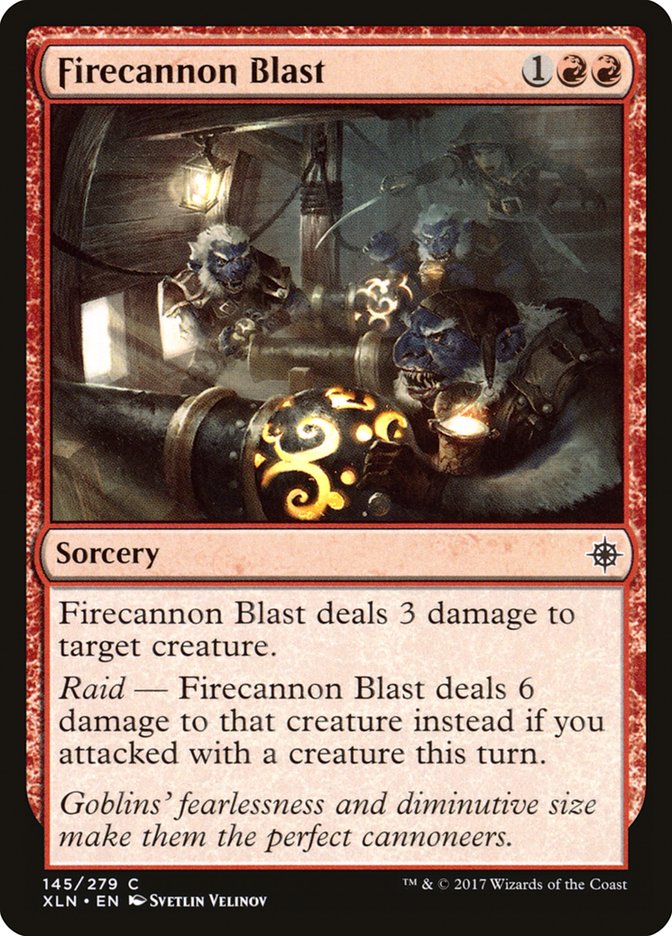 Firecannon Blast is considered one of the better commons in Ixalan, and plenty of players would be fine to first-pick the card. But what if something about your preferences gives you a reason to shift away from the card?

What if you’ve observed that the better versions (in your opinion) of the red decks in Ixalan use red as a support color? Maybe you take it to the point where you rarely play more than six or seven red sources. Then Firecannon Blast loses a lot of its luster due to requiring double red. In fact, this is exactly what Christian Calcano said regarding passing Firecannon Blast at Worlds. Given the preferences he had in the format, Firecannon Blast didn’t fit into the category of cards he found necessary for the decks he wanted to draft, and hence his tendencies shifted him away from the card.

Applying Preferences to Formats and Metagames

Preferences are much more than “I like the color blue” or “I prefer aggressive decks.” They evolve with each and every format you draft, so learning how to discern the way your preferences line up with the common opinion of a format is a great way to optimize for this knowledge. 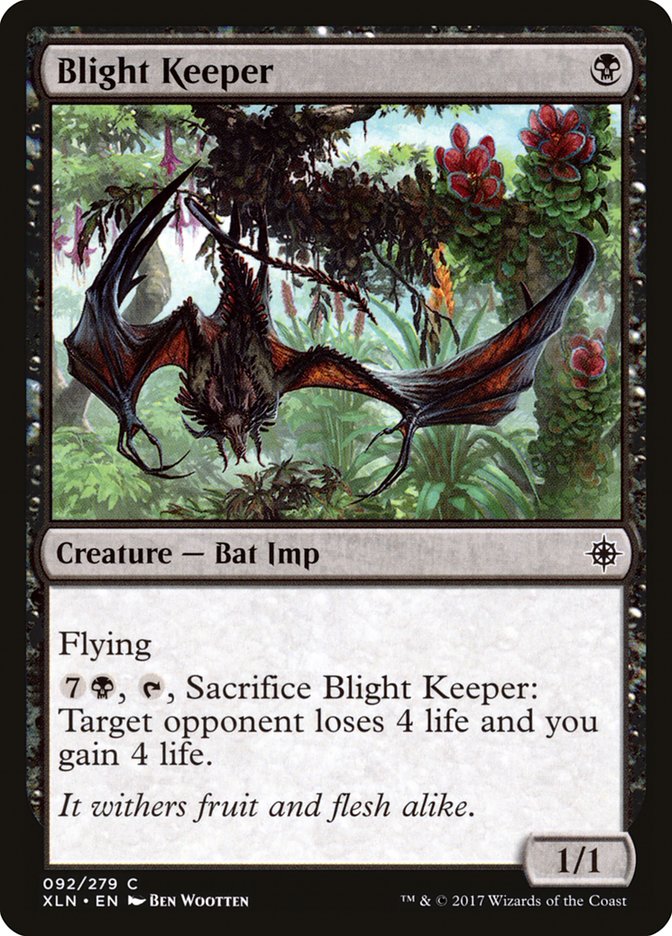 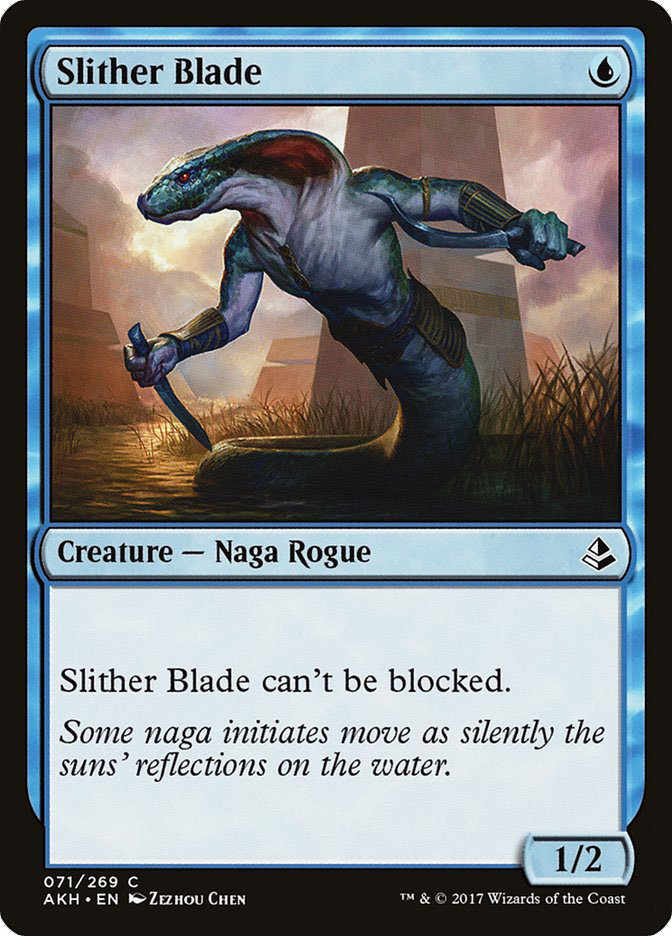 One way to do this is understanding when you like “bad cards.” The fact of the matter is there are rarely unplayable Magic cards. Everybody dismissed Slither Blade at the start of Amonkhet, but it went on to define its own archetype. The same goes for Blight Keeper and Swashbuckling in Ixalan. These are cards that you will often wheel because the overall community has deemed them “bad.” And if they line up well with your preferences and strengths, you can design an archetype to attack the metagame.

This doesn’t just function for odd aggro cards, though. Personally, I had a very different approach to Hour of Devastation from most, and it served me well. I really liked the card Cunning Survivor, but the U/B cycling deck wasn’t something that had as much of a punch as it looked.

When I realized that I could almost always wheel every copy of this card, things got interesting. I began taking Desert of the Mindful over Unquenchable Thirst and Desert of the Glorified over Torment of Venom, not because I was forcing this deck, but because both cards are great in any deck, yet the Deserts are more important to the decks I prefer. I realized that one of the reasons the cycling deck didn’t come together was because too many of the cheap cycling cards were mediocre. But if I could always get five cycling Deserts, then I didn’t need to play as many cards just because they had the text “cycling”. 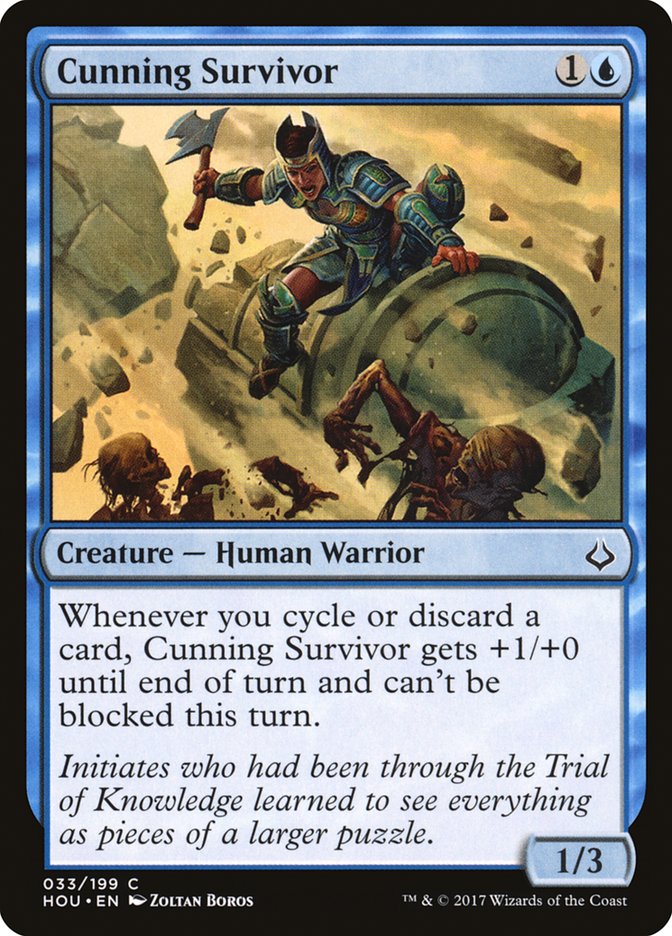 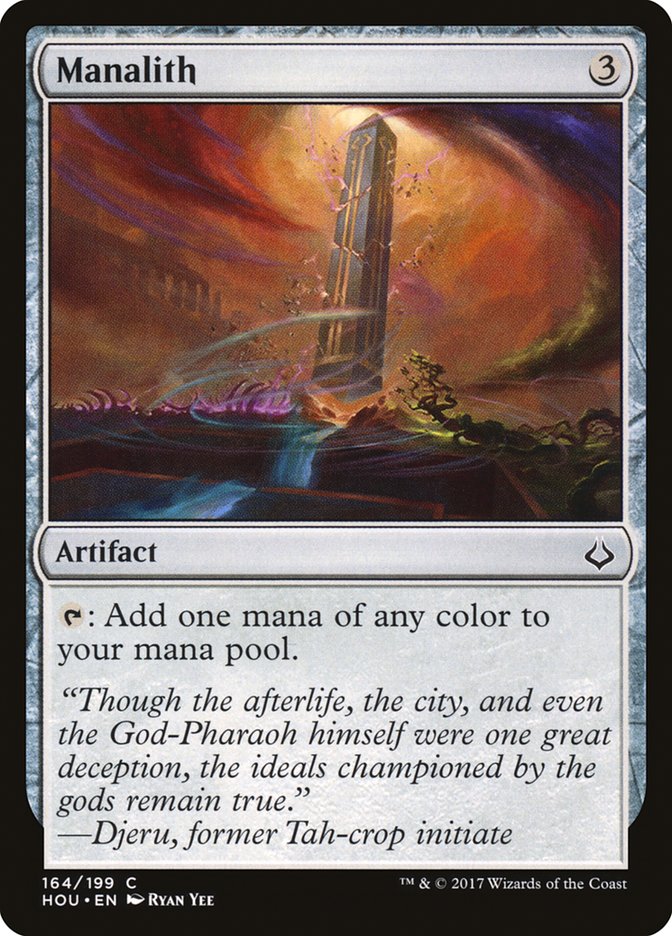 As I drafted this deck more and more, I learned more about it. I started double splashing a lot. And I realized that, given the density of cycling, it wasn’t hard to play Manalith and use it in the early turns. Manalith thus went up in my pick order because of my preference towards this deck. The games were enjoyable and I was winning. A lot. While it isn’t easy to make these discoveries, if you start really considering what’s out there and how it lines up with what you enjoy, you’d be surprised with what you can do!

Learning how your preferences manifest within a format is iteration. As you can see, the Cunning Survivor decks went through plenty of change in terms of what I prioritized. I figured out what worked and didn’t, and analyzed why or why not. Not everything is going to work, and the more out-there the idea is, the less likely it does. But everything is a process, and it’s always interesting to approach a format through a different lens, especially if it’s in a way you enjoy. 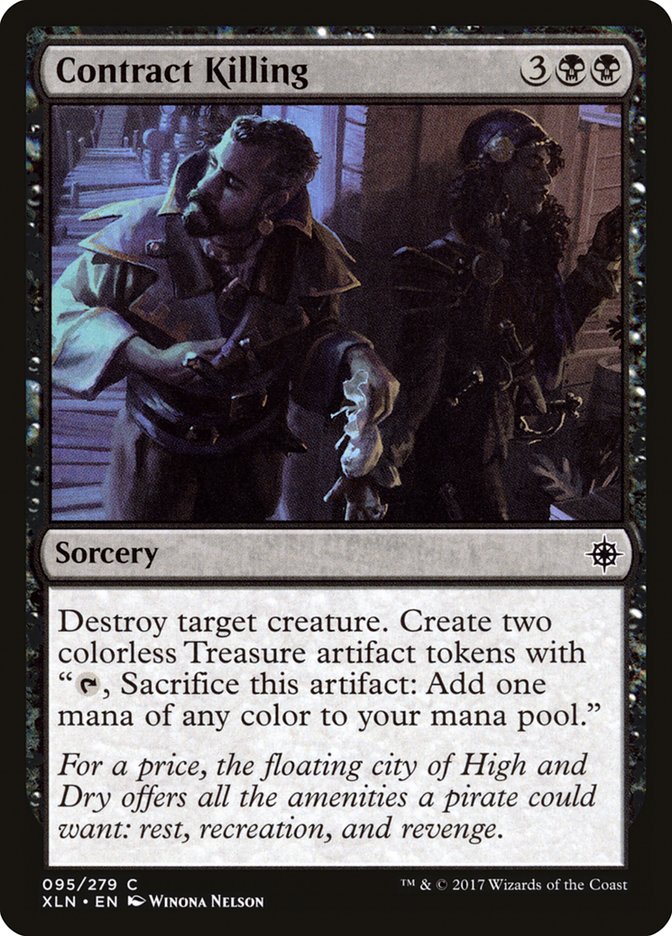 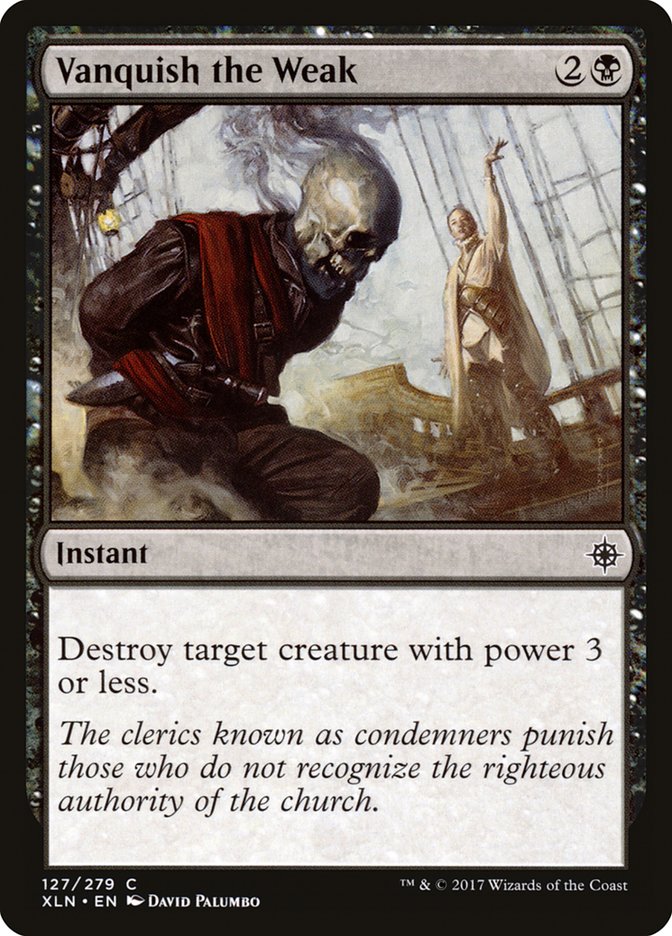 Overall, there isn’t an objective way to approach a Limited format. For Ixalan, it may be the consensus that Vanquish the Weak is better than Contract Killing, but if the black decks that you prefer to draft are often splashing, then maybe the best pick for you is the Contract Killing.

So take some time to reflect. Learn what you love about this game, and try your best to incorporate this knowledge into your draft strategies. There are many ways to employ this technique, and I urge you to start messing around with it. For science, of course!