Step One: Look at the one-mana noncreatures, especially the blue ones. Do they do something interesting/powerful? 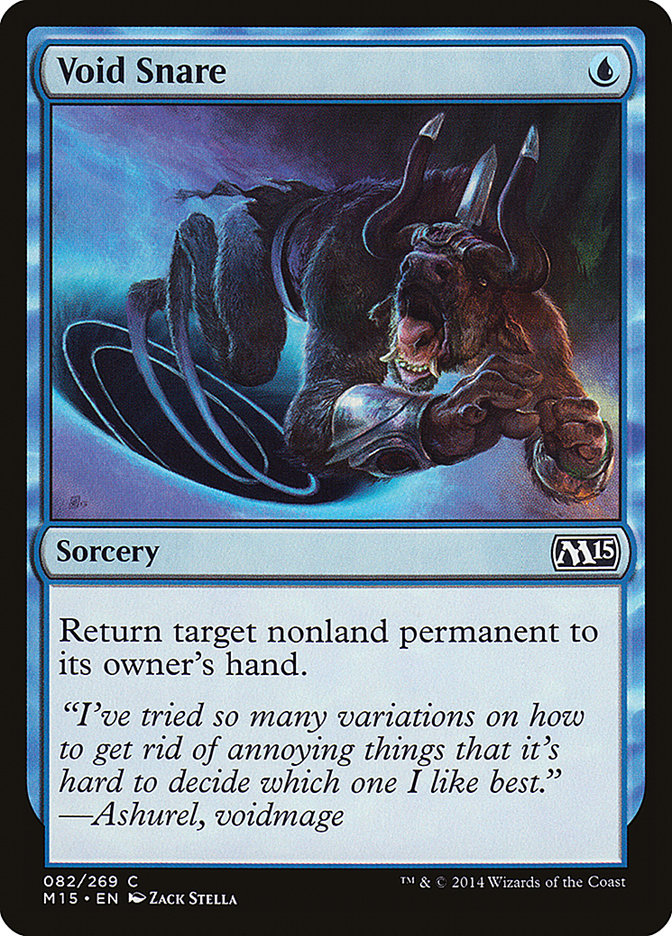 Look at this low-hanging fruit. It’s a Chain of Vapor! Better yet, it’s a Chain of Vapor that can be Burning Wished for! Not a bad start. This is exactly what Storm decks have wanted for a while – a tutorable catch-all answer to Thalia, Guardian of Thraben, Ethersworn Canonist, a naked Counterbalance, Eidolon of the Great Revel, Pyrostatic Pillar, and whatever other cards people play that Storm has issues with. Up until now, the best way to combat all of these was to sideboard in a bunch of Abrupt Decays and hope that Wasteland didn’t show up to pick apart a manabase that was trying to cast Abrupt Decay, Preordain, and Past in Flames. Now, Storm decks (and maybe other, still-Burning Wish-oriented combo decks) have something better than Eye of Nowhere.

That was easy. What’s next?

Okay, fair enough. What have we got going on here? 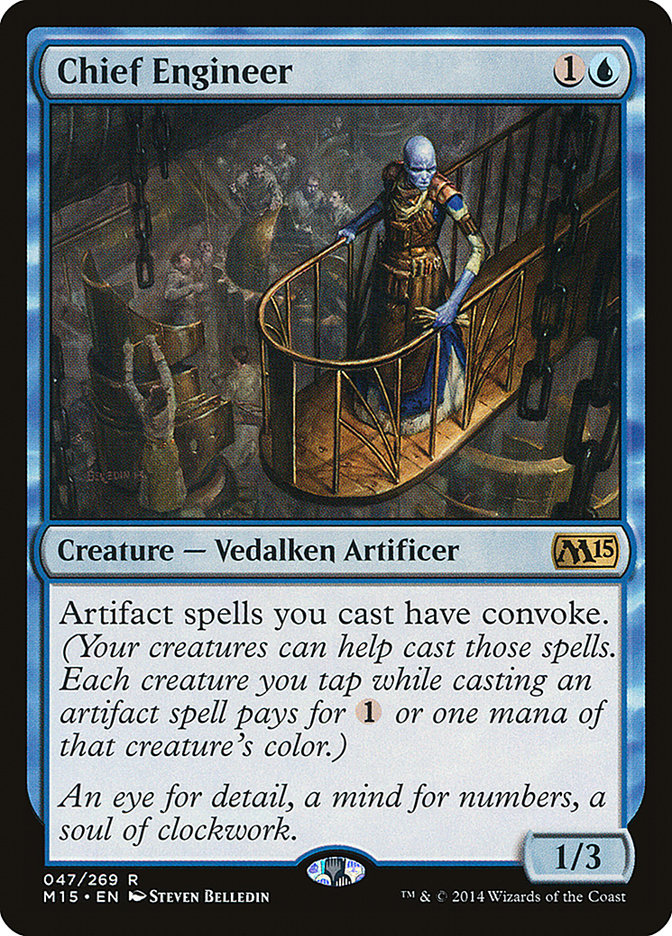 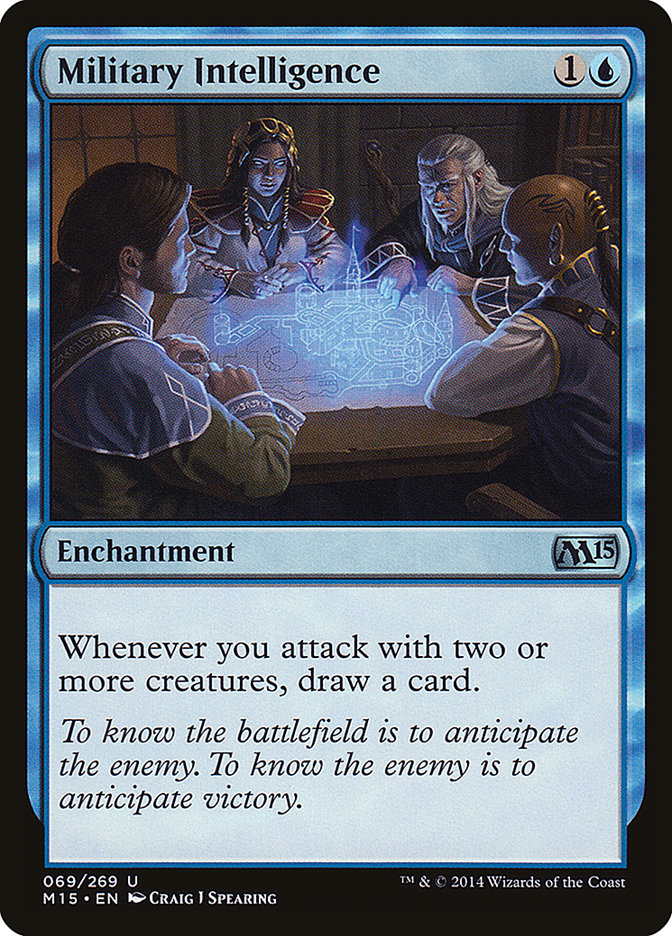 I know that everyone is excited about Chief Engineer, but I’m actually even more excited about Military Intelligence. Just so you have a barometer of how hard this effect is being pushed, here’s the last iteration of this card: 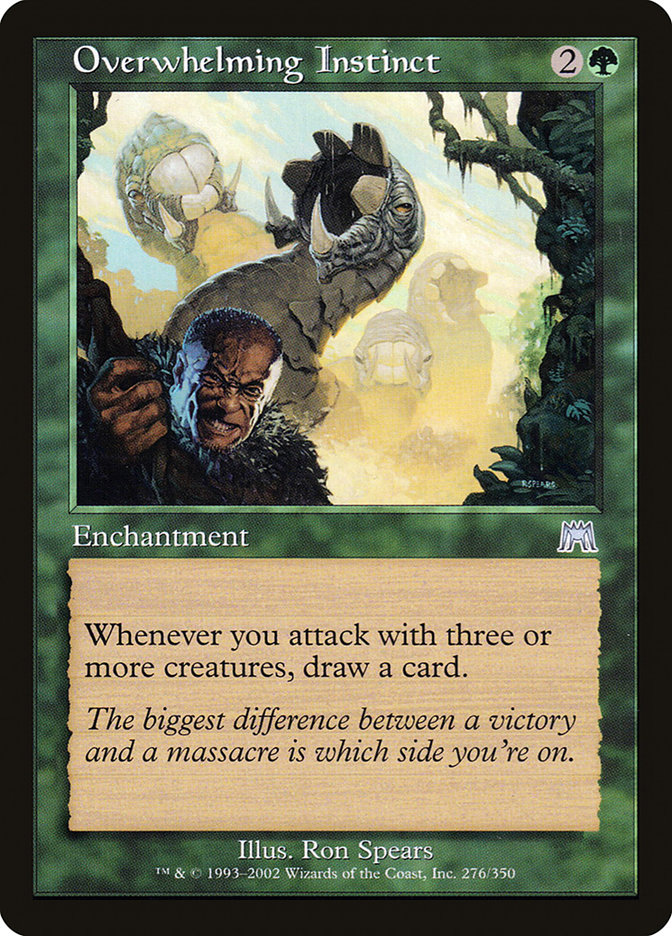 So let’s put this in perspective. In a set with a bunch of tribal interactions and cheap Elves, Wizards printed a three-mana card that asked people to attack with three creatures to draw a card.

Now, roughly ten years later, we have the cost reduced from three to two and put in the literal strongest color in the format for raw card drawing. That, my friends, is pushing it.

What deck does this card ask us to play? One with a bunch of inexpensive blue creatures and cheap (or free) interaction, right?

…what, you thought I was going to give you a Merfolk list? That deck has three-drops! I would never.

Another great upside of Military Intelligence is that it gives you more two-drops for Disrupting Shoal, which means that you’re less vulnerable to Stoneforge Mystic into Umezawa’s Jitte – a major vulnerability of this deck in the early game.

If you’ve been following me on Twitter for a while, you know where this is going.

Chief Engineer Glimpse Kobolds Cheerios Bacon Egg and Cheese Combo Breakfast Cereal (or “The CEGKCBECCBC”, as the Legacy community sometimes prefers) is an update on the well-loved “Glimpse Kobolds Cheerios” deck, which used Glimpse of Nature in conjunction with Legacy’s many zero-cost creatures to draw much of its deck.

Pivoting from “drawing a lot of cards” to “winning” is an occasional issue, as there are a lot of cards in the deck that aren’t zero-mana creatures and would therefore just kind of gum up the works. With the addition of Chief Engineer and Mox Opal, that has the potential to be less of an issue. Once Chief Engineer is in play, convoking out Slate of Ancestry or Cloudstone Curio is trivial. If you can chain together two different Kobolds with Cloudstone Curio in play and an active Glimpse of Nature, you can draw your deck, with two Mox Opal-fueled Grapeshots providing the kill.

There may be some sort of artifact X-spell that I’m not thinking of right now, so this could very easily get streamlined by a few cards with the addition of that and the removal of the Grapeshots, but I think that Chief Engineer into Slate of Ancestry is what this deck wants to be doing. If you’re more into a hybrid Kobolds-Affinity shell, check out Carsten Kotter’s Glimpse Engineer Affinity list here.

Okay, so let’s move on from blue cards. What’s the next step in evaluating Legacy playables?

Step Three: Look for cards whose power is conditioned on Legacy-specific things. 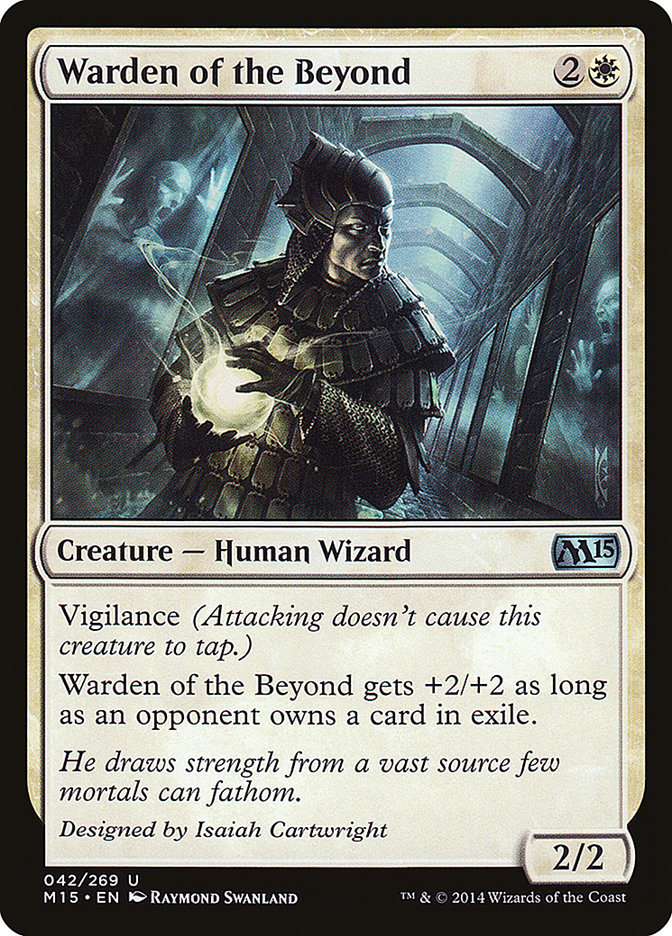 Although it’s not in the same ballpark as Deathrite Shaman in terms of power level, Warden of Beyond checks that box for me. There will always be something in exile in a game of Legacy – Swords to Plowshares, Force of Will, and Deathrite Shaman almost ensure that. I don’t know that a 4/4 vigilance for 2W is good enough to see play in Legacy given the present of Brimaz, Mangara, Flickerwisp, Mirran Crusader and Aven Mindcensor, but if you’re in the market for a Jotun Grunt that doesn’t quit, Warden of Beyond might just be what you’re looking for.

Reclamation Sage will replace Viridian Shaman and Harmonic Sliver in Green Sun’s Zenith, Living Wish and Birthing Pod decks. Harmonic Sliver will live on in our hearts and Glittering Wish sideboards, while some people will argue that Viridian Shaman’s ability to not trade with a Deathrite Shaman makes it relevant. Both are true, but only one is relevant.

Step Five: Look for broken combo cards. This is kind of a “know it when you see it” thing, but some guideposts are:

For most combo-oriented cards, the spells can’t really cost more than four and the creatures can cost either zero, one, two, or seven-plus. Fortunately, we happen to have a card that fits the bill: 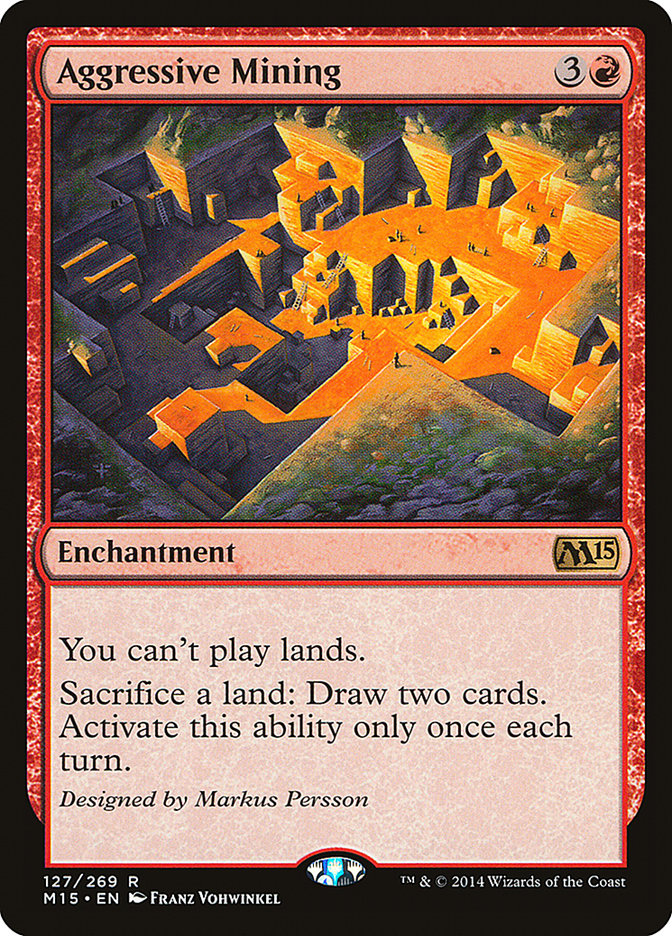 Markus “Notch” Persson, the creator of Minecraft, was invited to make a card for Magic 2015, and he delivered in a big way. This card has its drawbacks, to be sure, but any card that has “0: Draw two cards.” printed on it is poised to break things wide open.

Of course, there is the little issue with the not playing lands anymore, but presumably we can kill them with the seven cards that we draw between casting this and our next turn.

This naturally takes us down the path of a Storm-oriented deck. Unlike with Lion’s Eye Diamond, this deck wants to have lots of cards in hand. It is definitely closer to the Invasion sacland + Sign in Blood sort of combo deck than the Lion’s Eye Diamond + Infernal Tutor combo deck. Since we have a powerful unconditional card-drawer, we’re going to want something that can convert raw cards into the specific cards that we want. We don’t want to just play a bunch of tutors, though, since that defeats the purpose of drawing a bunch of cards. Instead, I think it’s time to consider bringing back an old Extended staple: 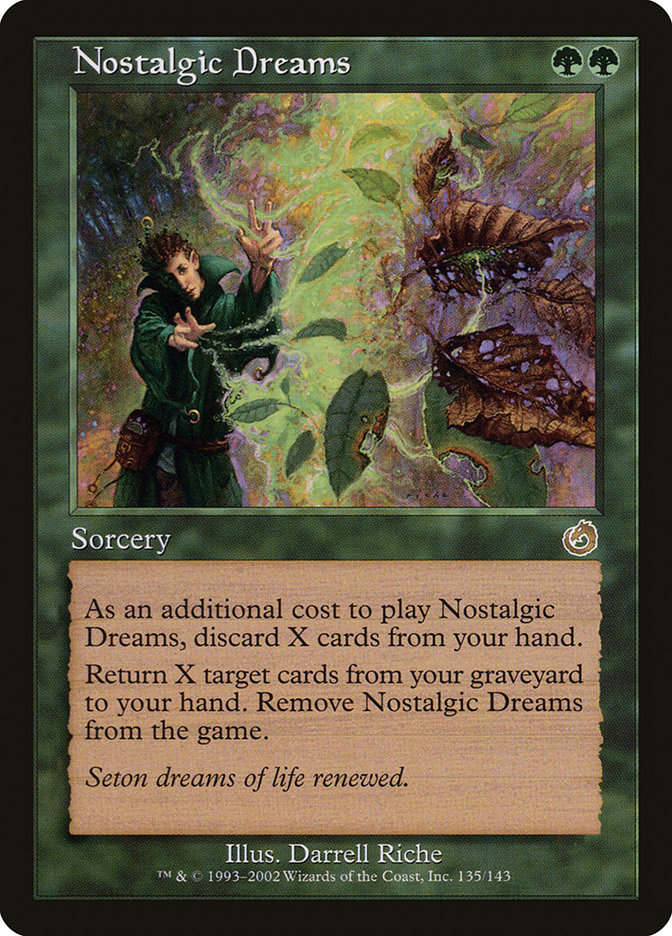 Red and green offer a lot of mana acceleration and card draw on their own, but we may end up dipping into black for superior Ritual access. Red and green have Tinder Wall, Rite of Flame, Desperate Ritual, Pyretic Ritual, Manamorphose, both Elvish and Simian Spirit Guides, and Seething Song. Black has Dark Ritual and Cabal Ritual along with Tendrils of Agony as a finisher. I don’t think this deck is going to need the black Rituals. I think it can get there with just the green, red, a ton of artifact mana and some Burning Wishes. Put it all together, and you get something that looks like this:

I’m not entirely sure about how well the mana is balanced – I know that traditional Storm decks play roughly 31 mana sources between artifact mana, Rituals, and lands, but Aggressive Mining sort of throws things for a loop. I think that Nostalgic Dreams and a bunch of card draw is sweet, and I think that the possibility of Reforge the Soul off of Aggressive Mining is sweet. It’s possible – likely, even – that the deck would prefer Sensei’s Divining Top to Gitaxian Probe, since what the opponent has is going to change so much. Besides, once you’re playing with four of a given Miracle, playing Top just makes sense. It may end up being the case that the manabase would need reworking (away from Land Grant, toward basic lands and fetchlands) to accommodate the addition of Top. Regardless, I like this framework and think it has a lot to offer.

What’s left on the list of ways to spot a Legacy playable?

You know what I’m talking about.

I’m not saying that Sliver Hive is going to solve Slivers’ problem with Dark Ritual and Show and Tell, or that Waste Not is going to make Burning Inquiry a $5 foil, but it’s worth taking the temperature of these micro-strategies and seeing how close they are to “real.” It’s worth reminding ourselves that Slivers have a dozen free rainbow lands nowadays, and it’s worth remembering that there are even more incentives for the Megrim + Jar-style decks than there were a few weeks ago. And in case you were wondering: yes, I happen to think that Reforge the Soul is a little underplayed in Legacy.