There’s just something in the blood of Magic players everywhere whenever those new sets hit the ‘net and then the streets shortly thereafter. New
cards are the drug that keeps us chomping at the bit for more Magic.

And Khans of Tarkir is nothing different. It plays right into the sweet spot of Magic expectations. It hits a theme we adore in multicolor. We have loved
sets like Invasion, Apocalypse, Ravnica Block, Shadowmoor, Shards of Alara, and Return to Ravnica. Obviously Khans slides right alongside all of these
great sets of “Magic Days Gone By.” And that’s not all: it also does something we’ve not seen before–an emphasis on a color and its two enemies rather
than its two allies. You have the cookie of multicolor expectations combined with the chocolate chip of wedge colors, to combine two things into a set that
should prove to be really fun but from a familiar angle. Get your clan on!

One quick question on nomenclature. Do we use the term Necra or Abzan? I’ll use Abzan for this article and for the clan specifically, but what about
generally about Magic? Will it be Raka, Ana, and such? Or Jeskai and Mardu? Years later, which one will rule? Considering that we often use words like
Esper for U/W/B, despite the fact that your “Esper” deck may not be themed (for example, you could have an enchantment laden EDH deck built around Zur the
Enchanter), but we still call it that. My bets are that the new stuff will win out. But who knows?

When you have this big sexy set with all of the multicolor madness, how can you not want to build Commander decks from it? It’s crazy. Get your clan on,
and grab a three color deck for everyone!

Have you noticed that a lot of the clans in Khans of Tarkir appear to be tailor made for a legendary creature from the first set of Commander product?
Consider Sidisi, Brood Tyrant for the Sultai. The Mimeoplasm is also really good with the various effects. The best example though is Abzan. Anafenza, the
Foremost is alright as their khan, but man, Ghave, Guru of Spores seems to bring it. 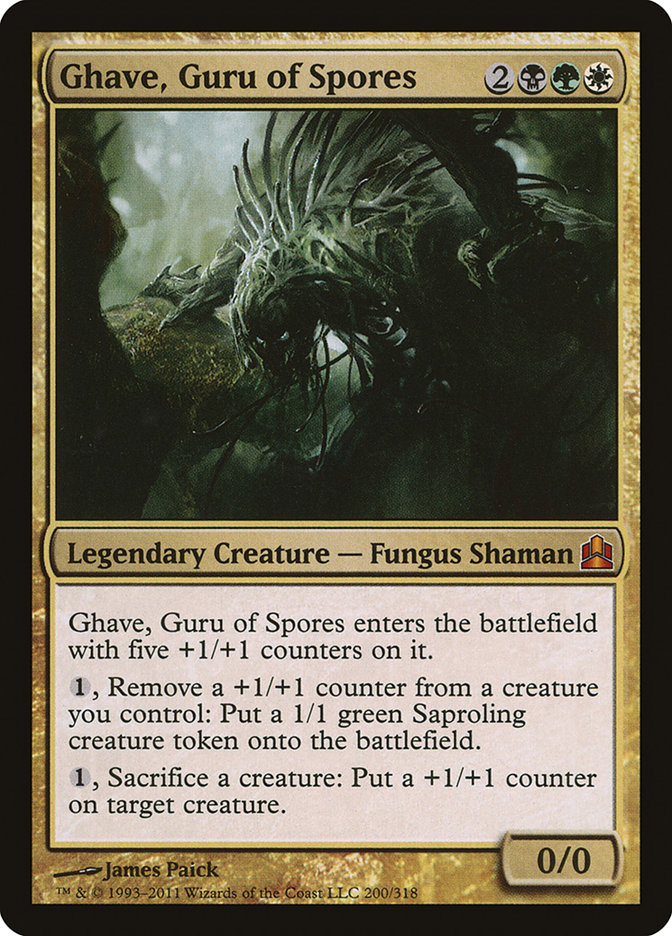 So I felt it would be fun to build that Abzan deck around Ghave, rather than Anafenza. Let’s push the +1/+1 counter theme, while we hit on a few others as
well. Let’s Ghave this thang up!

And there you have it, all Ghave’d out.

The best thing you can do in the Abzan colors is push your counterage. You have tons of ways to pump out +1/+1 counters like giving away candy for a Junior
High government election. Let’s look at some obvious choices, Hardened Scales from Khans of Tarkir for example. This is a powerful engine for one mana that
can do a little extra each time you drop a counter on something. Then we have stuff like Doubling Season or Corpsejack Menace to really threaten the board.

The fun doesn’t stop with these cards! We can push the theme with something like Cathars’ Crusade, which gives counters to everything of yours when you
drop a dork onto the battlefield. Abzan Ascendency also delivers counters to the team on arrival, while cards like Forgotten Ancient provide a nice adjunct
to the counter-making we all adore. See also: Gavony Township.

With that many counters, don’t forget proliferate! Contagion Clasp, Contagion Engine, and Plaguemaw Beast are all in attendance. In fact I think the Beast
is a Ghave essential since you can sacrifice a saproling made by Ghave to pump up the Guru again as well as anything else that you control. Repeatable
counter making in this deck is quite obscene.

Ajani is your best friend, baby! Given that almost every Ajani variant doles out counters, the only question you have to ask is how many Ajanis to run.
Ajani will be mentoring your heroes to the red zone of domination. And big creatures. Ajani often makes Garruk look like a weakling with his permanent
pumping.

Think that’s a lot of token amplification. Oh, my dear. You have no idea. Kalonian Hydra? Not only is this mythic Hydra a great beater, but also a
doubler of tokens. What about Opal Palace, Blade of the Bloodchief, Mikaeus, the Lunarch, or Meadowboon?

Alright, fine, so we have a passel of token-age. We get it! But what bodies really use this stuff anyway? I mean, other than weaker guys like Spike Feeder
or Festercreep, what’s really out there?

There are a few cards that need little recommendation. Say hello to Triskelion, who stands without any accolades. Spike Weaver is here too, doling out Fogs
as needed. Mindless Automaton can turn into cards. Fertilid can grab lands. These are obvious choices that have been added to +1/+1 counter decks for a
very long time.

Realm Seekers has a great pedigree for this in fine Fertilid tradition. It begins big (and bigger if you have some counter amp-age in play) and can churn
those counters into lands ad nauseum. One card I think is often skipped by in decks such as these is the great Workhorse. Consider how explosive the Horsey
can be in a deck like this. With only a Doubling Season out, it’s an eight mana return for a six mana investment. The more proliferate or Corpsejacks you
run, the nastier this thing is. You can load it up with a bunch of counters from Forgotten Ancient and company and just spew mana every which direction.

I included a few cards, such as Cytoplast Root-Kin and Sporeback Troll, that do double work here. They have counters to amplify and share, while also
helping out other creatures with counters too. The same is true of stuff like Renegade Krasis.

And don’t forget other counter enablers, such as Ainok Bond-Kin giving them first strike, Crowned Ceratok granting the almighty trample to your team, and
Korozda Gorgon shooting down stuff with counters. The Ceratok is particularly useful, since your newly grown army will be better able to smash-hammer a
defense down to bits. No chump blockers will stop your horde now!

Anafenza may not have been strong enough to make the cut as my Commander, but we can certainly find a spot for the aggressive body and counter donating. A
4/4 for three mana is sexy, and when you add in the token-granting on attack as well as graveyard-abuse-hosing, I’m all in.

Black adds some unexpected adjuncts to the counter strategy. You might expect it to rock green and white, but consider cards like Necropolis Regent and
Mephidross Vampire for your decks. Black still has it baby! 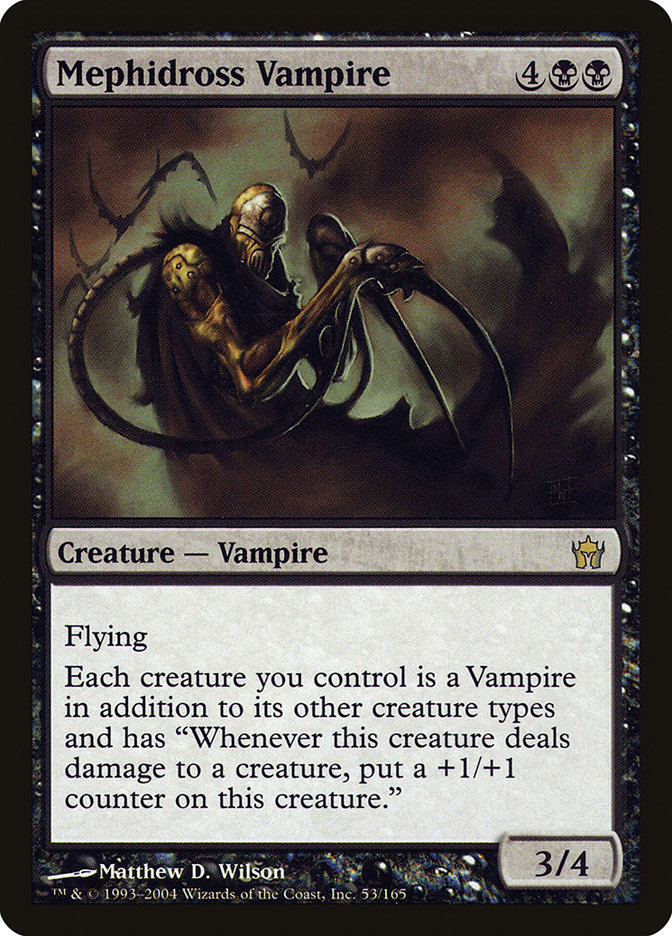 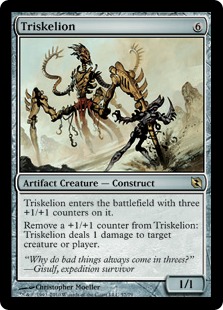 Speaking of black, I added in a useful little combo. Cast Tooth and Nail for Mephidross Vampire and Triskelion. This will let you Plague Wind the table.
How you ask? Remove a counter from the Trisk to shoot a creature, the Vampire will replace it with another counter, which you remove to shoot the creature.
Repeat until all creatures are dead. The Vampire won’t let you kill off a player that way, so it’s a clunky Plague Wind for the same cost, but it’s fun!

Don’t forget to add in fun answers to your typical problems. Pernicious Deed, Utter End, Swords to Plowshares, Silence the Believers, and lots more! We
need to blast annoying permanents that get in our way. I really enjoy Living Death. It sacrifices every creature in play, so it can kill everything, even
indestructible dorks. It also gives the deck a little answer to someone who blows up your impressive board by simply doing the same in return while
bringing all of those awesome creatures right back to play.

Then we just finish the deck up with some essential stuff like mana (Sol Ring, Darksteel Ingot, Cultivate, Solemn Simulacrum, etc.) as well as solid
equipment (Lightning Greaves, Batterskull, Sword of Fire and Ice), graveyard removal (Nihil Spellbomb and Bojuka Bog) and fun tricks for the team (Dictate
of Erebos and Heliod’s Dictate as well), and finally a few essential cards to give the deck some extra pop (Volrath’s Stronghold and Maze of Ith, for
example).

And there is the most recent take on Ghave with an Abzan spin!

Other thoughts? What about Spike Breeder or Drakestown Forgotten? You’ll find tons of stuff to delve into.

How will you Commander up Khans?