I hope you read the title of this article in the voice of William Shatner.

If you haven’t please take a moment and do that. I’ll be waiting.

Time to get rolling!

First off a big thanks to everyone who offered up their decklists last week as well as the numerous folks who sent me messages
over Facebook! I’m going to give it another week before I announce what deck I plan on building for my FNM Hero quest, but later on I plan on explaining
all the details of just how I’m going to approach our new adventure. Feel free to keep the lists rolling in as you test out more and more of your
experiments with Khans.

Speaking of brewing, this weekend couldn’t have gone better for me. The new local game store that I mentioned, 2 Drop Game Shop, had their first Prerelease
ever and it went swimmingly for yours truly. In just their third week of operation they saw an 80+ person event fire at midnight on Friday, which, to say
the least, blew me away. I chose Abzan because the chance to open a promo Siege Rhino overwhelmed my delicate sensibilities, and boy howdy did I get the
vapors when I popped my box open and saw Rambi the Rhinoceros looking back at me.

The pool was mediocre at best, with Siege Rhino and Necropolis Fiend being the standouts, and double Abzan Guide doing more work than I ever thought
possible. I was pitted against Sarkhans, Wingmate Rocs, and other cards I thought would be too good to even think about beating, but they weren’t.

Bombs in this set aren’t measured by how unbeatable they are, their worth comes from the amount of value they generate. Knowing when to flip a morph is the
difference between winning a game and falling too far behind, and that fact gives this set something that a lot of players are happy about: decisions.

For blocks prior it felt like you had to jam the most threats or fill your deck with two-drop creatures. If you ever fell behind in tempo for a turn you
lost. Khans is slower and more methodical. Sure, there will be those games where you get run over by a very aggressive raid deck, but in the abundance of
matches I played this weekend I rarely saw anything like that take place. 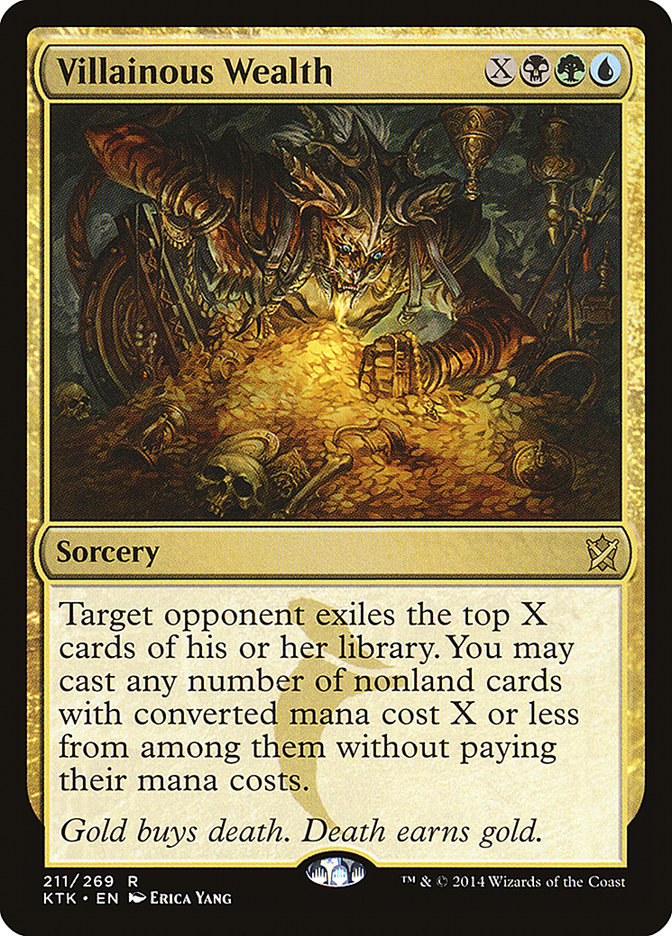 After a 5-1 performance on Friday I decided to sign up for Saturday’s event because, well, I was having too much fun. Luckily, at 8am the Top 8 decided to
split, so I thankfully was able to eke out few hours of sleep before doing battle again. This time I chose Sultai since they were out of everything else.
My faith in the Brood was rewarded with Sagu Mauler and a Thousand Winds. Again, my deck and, thankfully, my choices all seemed correct, and after going
undefeated in the Swiss I found myself in the finals against Pro Tour competitor Paul Dunaway. We split games 1 and 2, but my deck was able to edge him out
in the rubber match on the back of a boarded in Villainous Wealth for six that yielded two removal spells and extra blockers for a near-lethal attack.

One of the coolest things about Khans Sealed is just how skill-intensive it feels. Is it a combat trick or are they feeding a creature to trigger raid?
Should I block that morph? All of these decisions lend to the feeling of a very deep format, and we’ve barely scratched the surface!

Step Four: Buy my old lady something nice with that money.

All of these steps feel very reasonable. I can’t wait to achieve them.

But anyhow, all of that Sealed got me thinking about what kinds of decks I’d like to brew for the upcoming Khans of Tarkir Standard. With New Jersey coming
up, the field is wide open and whatever people play is going to shape our favorite format for months to come, no matter how unrefined the lists are.

The first deck that really stood out at me was Sultai Reanimator. Early in the week BBD and Todd Anderson battled with a pretty
nifty looking list, but I’d ideally take the deck in a slightly different direction.

When testing with Necropolis Fiend days prior, I found that it was incredibly powerful and often was being cast for BB in the early turns of the game. A
Satyr Wayfinder meant that it cost five, and if that was followed by a Commune With the Gods, you’re talking about a two drop 4/5 flying creature that
kills whatever your opponent plays. Combine that with ridiculous role players like Nyx Weaver and Sidisi, Brood Tyrant and now we’ve got a machine.

Todd was on a fantastic path with this deck, so I didn’t really want to change too much of his vision, but there are certain cards I just couldn’t justify
leaving out. Nyx Weaver generates too much advantage for this deck, and being able to buy back a card with its last ability makes up for milling something
relevant in the early game while providing you fuel for Necropolis Fiend and Whip of Erebos in the early setting of the match, not to mention comboing very
well with Sidisi. All of this gets pumped out faster with Caryatid and Elvish Mystic. In a world full of Mono-Red Aggro in the infancy of the format, you
want your cards to be as powerful as possible.

If we’re not playing Abzan for Siege Rhino and Ashen Rider, you have to make up for that with consistency and sheer brute force. The sideboard might be
ambitious, but Ashiok might blow the doors off this deck when it plays against its Abzan counterpart. A resolved Ashiok is going to do some serious damage,
and I’ll be testing it thoroughly to make sure it’s not too cute.

Next up is a combo deck that makes its way from Tampa, FL.

Armada Games is one of the most well-known gaming stores in Florida, so it makes sense to me that the next entry in the brews lineup comes from there. My
bae and male life-mate Brennan DeCandio sent me this list in a raw form, created by a local by the name of Jake Mattern.

It’s beautiful, ridiculous, wildly inconsistent, and absurdly difficult to play. The inconsistency comes from the sheer level of difficulty involved in
playing it, and keeping track of everything becomes all sorts of hard.

I’ll give you the list. You make the call.

After playtesting this deck the least I can say about it is bring an abacus.

The basis of this combo is loading up a creature with an abundance of enchantments and triggering untaps as many times as possible with Jeskai Ascendency.
The ton of mana lets you pretty much “go off” with Temur Ascendency, which gives your creatures haste. Eventually a Dragon Mantle and an absurd amount of
mana combined with Burning Anger will let you power up a creature and melt your opponent’s face off.

This all sounds so simple, right?

Play this deck then call me.

Is this deck the real deal? After a fair bit of testing it just might be. There are just some games where everything goes right and the opponent can’t do a
thing about it. Loading up enchantments on a Caryatid keeps you safe from removal or burn spells, so figuring out which creature to bet the farm on is very
important.

Get out your calculator and have fun!

So far a fair bit of people have been asking me to set some rules for FNM Hero to abide by, so I’ve set some ground rules to follow for the coming weeks
while we rock this like a hurricane.

Unlike the other FNM Heroes you might be used to, I don’t plan on doing this with fifty bucks. I want this to be realistic, and almost every single new
player that gets into Magic spends a little bit of money.

This will cover entries, sleeves, and a little trade binder to work with after the purchase of the deck I’ll be playing with.

One thing that got on my nerves when I’d read an FNM Hero was when someone at the local shop would give a “gift trade” or “freebies” to the person doing
it. You throwing away those sleeves? I’ll take them! Free $10 in trade since you know the journey I’m on? Thanks!

Not this guy, which is why the budget is what it is now. I don’t want help. I don’t want charity. This will make sure that I keep everything legit.

The most asked question through the last week has been “when is it going to stop?”

The answer is simple: when it stops being fun. One of the best parts about FNM Hero is when you’re done, it’s usually because you either have a full
collection and are no longer the underdog anymore or when you just get tired of being crushed over and over again with your budget deck.

When that day comes, the sendoff will be epic as I take my collection, place it on a raft, push it out into a lake, and have an archer shoot a flaming
arrow on it as it is engulfed in fire.

…or I’ll just use the cards and build more decks.

Like many of you, the next week will be spent jamming as much Khans as I can in preparation for Grand Prix Orlando.

This tournament is going to be like my Bar Mitzvah.

In less than two weeks I become a man.