Many interesting stories made their way out of Grand Prix Richmond this past March and the one
that struck me the most was that of Andrew Calderon. Andrew started off 13-0 with Scapeshift and was the last remaining undefeated player going into Round
14 before he lost his last two matches to end up in 13th place. 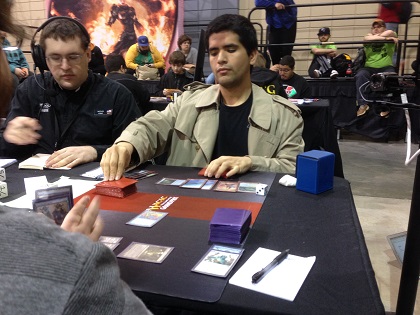 It’s not often that a player goes into Round 14 in first place and misses Top 8, and it is even less frequent that a player wins his first thirteen matches
with who-knows-how-many byes and has his deck fade into obscurity.

Also for the record, it’s not often you see the often imitated but never duplicated T-shirt and trench coat combo, also known as the Keanu Reeves special.

But alas, Andrew did win thirteen rounds in a row, was unable to draw in Round 14 against a player with one loss, lost that round and the final round, and
finished at 13-2 with a Pro Tour qualification, no flight, and a “thanks for coming” to his name.

For reference, here is his decklist:

Andrew’s other claims to fame include his success with Magic Online as handle echecetmat35, as well as an awesome story from this year’s TCGPlayer 50k
where he met Josh McClain in the finals and somehow convinced him to split the available $18,000 in prize money $9,500-8,500 in Andrew’s favor because
Josh’s matchup was “so bad.” Andrew then effectively conceded the match by keeping two hands in a row without white sources, resulting in what amounts to
the sale of a plastic trophy to Josh for $1,000. This sent Josh into a tailspin of degenerate living that has included such standout moments as “flipping a
coin with Alexander Hayne for 500 Euro,” “stealing an iPad from a small child” (Joe Demestrio), and making a bet with Alexander Hayne regarding an
individual’s likelihood to be homeless in the future (that individual was again Joe Demestrio and I believe Josh took the under on 30 years).

There are some who might say that this is just a series of well-articulated daggers in the direction of Josh, but he chose not to come to Minneapolis this
weekend and play Werewolf, so he gets what he deserves.

Speaking of GP Minneapolis, a few weeks ago Andrew sent me a message online with a decklist that he described as “going to either crush everyone or be
terrible”. It turns out that it is neither of those things but is very interesting, and if you are looking for a last-minute combo deck that no one has
seen before to take into battle this weekend, I can recommend this as both fully functional and totally awesome.

That’s right, folks, what we have here is an attempt at what Adam Yurchick has called “the most powerful deck type in Magic,” the hybrid combo deck. In the
same vein as Dark Depths/Thopter Sword that enjoyed its time
dominating Extended many years ago, this deck attempts to take two established combo decks that have been proven successful and mesh them together inside a
mutually beneficial shell. Let’s break it down. 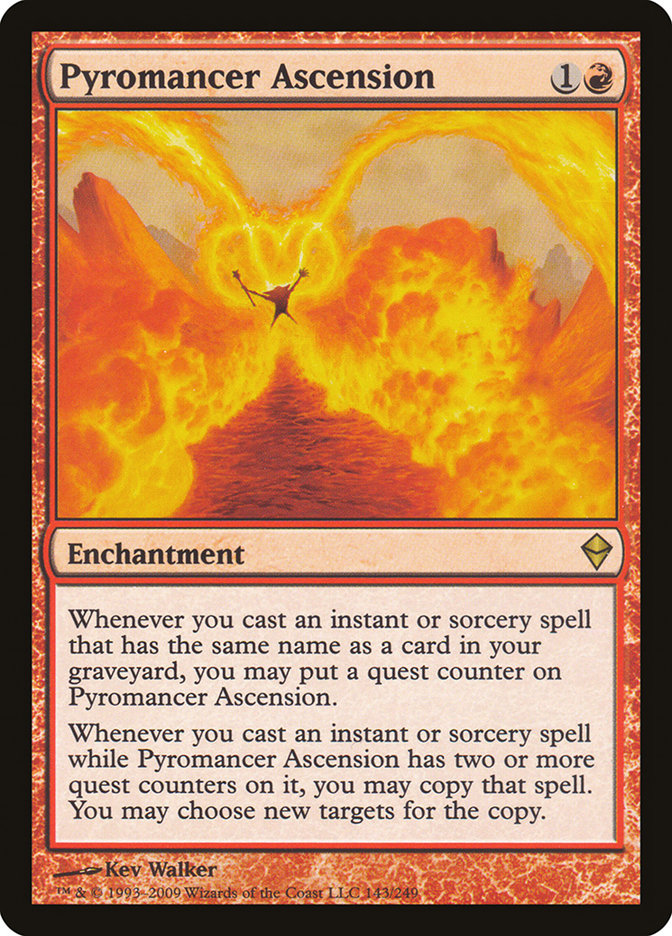 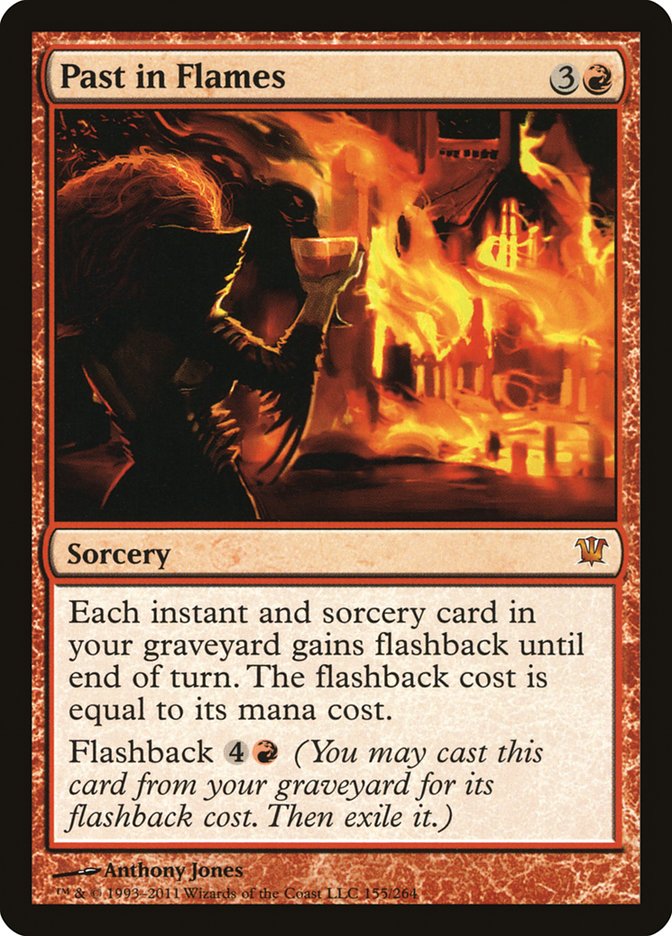 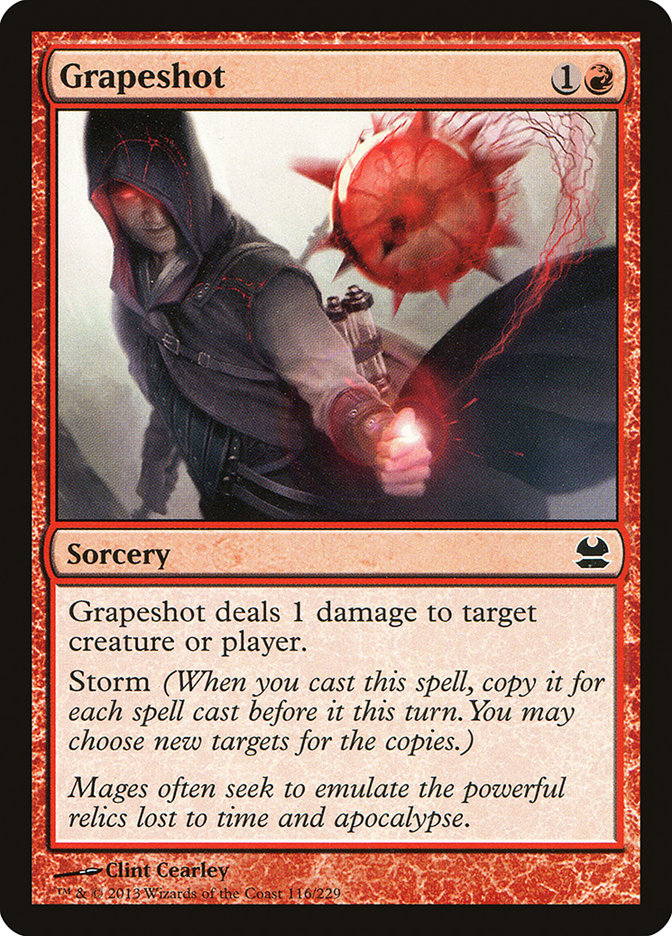 Here we have the barebones minimum number of slots required to operate as a Storm deck. Pyromancer Ascension continues to be a broken Magic card and we
fuel it with some old and new cantrips and mana acceleration, much in the same way as regular Storm, but without as much redundancy. When this deck is
taking a Storm approach, the goal is the same as regular Storm: fill up your graveyard with cantrips and mana, get Pyromancer Ascension active and abuse
it, or generate six mana while having Past in Flames, Desperate Ritual, Manamorphose, and a very full graveyard. Sprinkle in two copies of Grapeshot for
the combo kill and you have yourself a plan. 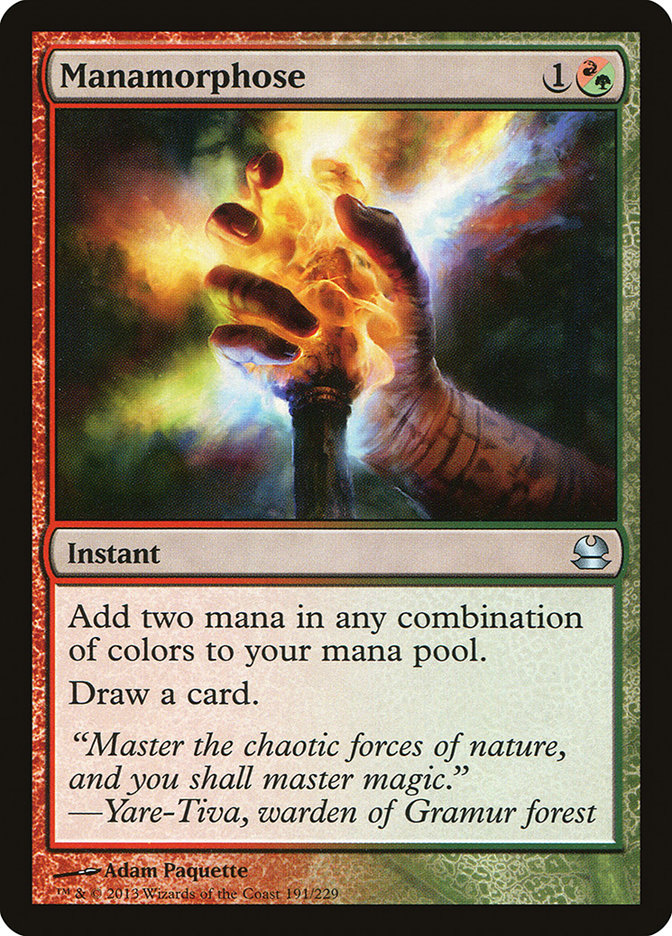 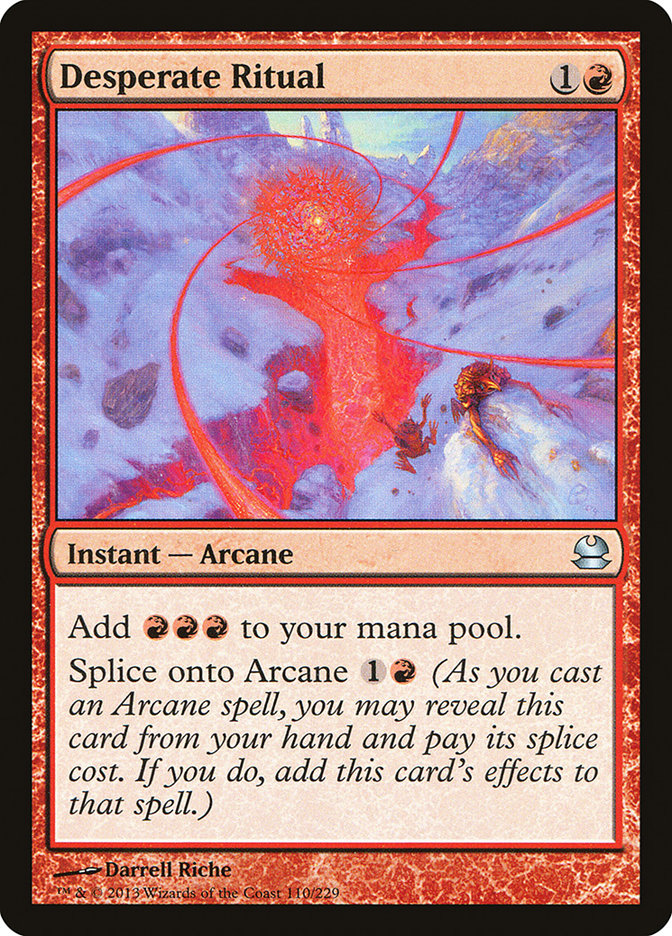 These eight cards represent the best cards to abuse with Pyromancer Ascension. Although other cards like Explore or Gitaxian Probe are no slouches either,
Manamorphose and Desperate Ritual (especially in tandem) produce the most value available when being copied and are instrumental both in a Storm approach
as well for fixing mana requirements for the Scapeshift combo. The inclusion of Desperate Ritual and not Pyretic Ritual is due to the corner-case scenario
of being able to splice a Ritual onto another Ritual.

Now this is where things get interesting, and a little bit brilliant. As it comes to pass, there are two things that can happen as a Storm deck when you
are going off with a bunch of cantrips and rituals. The first thing is, you can combo off and kill your opponent. The second thing is, you can flood out on
lands and die. That second part is where Scapeshift comes into play. As opposed to needing to carefully calculate mana, storm, and cards available in order
to go off, the addition of Scapeshift provides this deck with an “Oops, I win!” element that the easily disrupted Storm combo has never had before. No more
will a single copy of Abrupt Decay or Rest in Peace ruin all the plans of our combo deck. Now, aided in particular by cards like Explore, we can go off and
kill the opponent with a single topdeck. Powerful indeed. 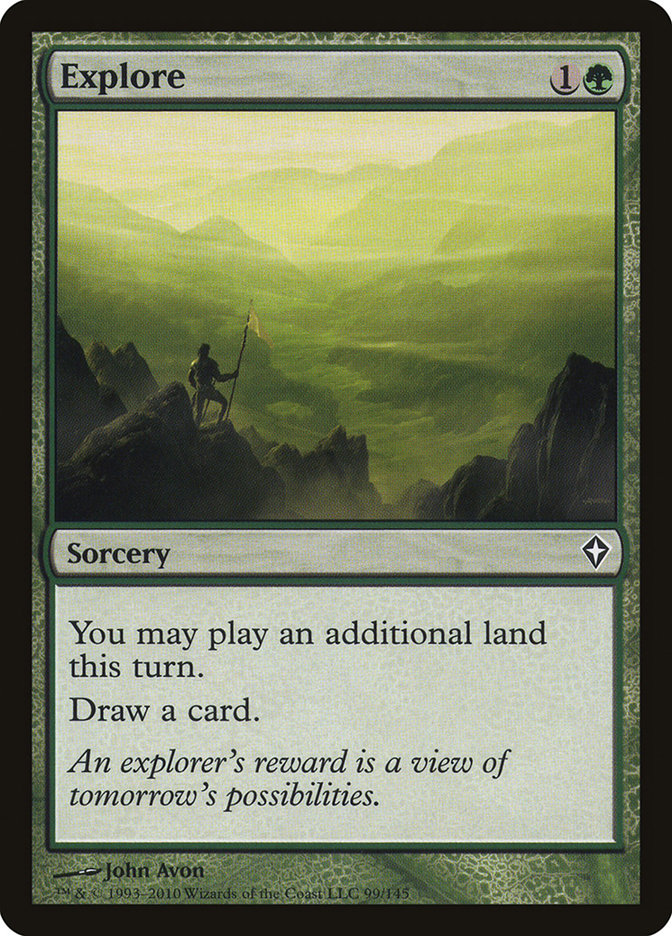 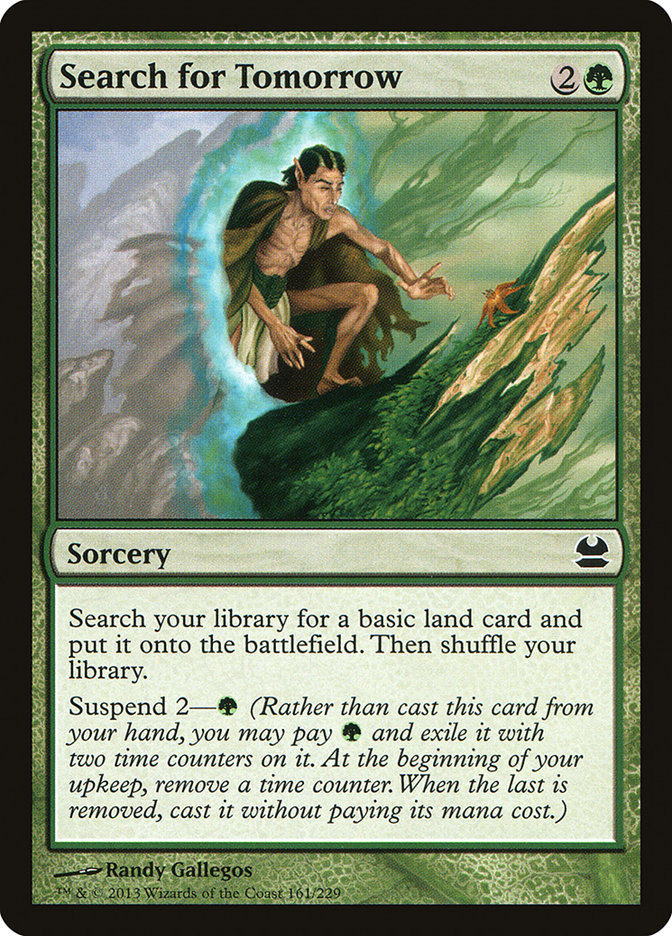 These are the Scapeshift shell elements that we have chosen to include and they are surprisingly good. The best discovery I made when playtesting this deck
early on is how much traditional mana acceleration can aid an already mana-hungry Storm deck in going off. Casting Explore or Search for Tomorrow mid-combo
is not a play that produces additional mana, but the impact these cards can have on the first two turns of the game is very powerful and not something
traditional Storm has ever had access to before, not to mention the coolness of casting these spells with an active Pyromancer Ascension. 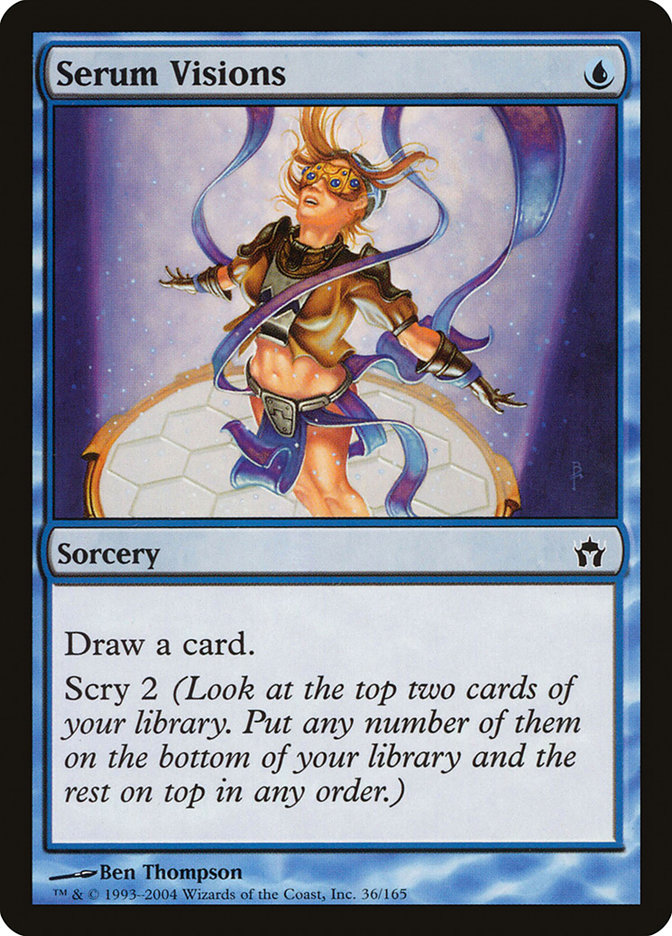 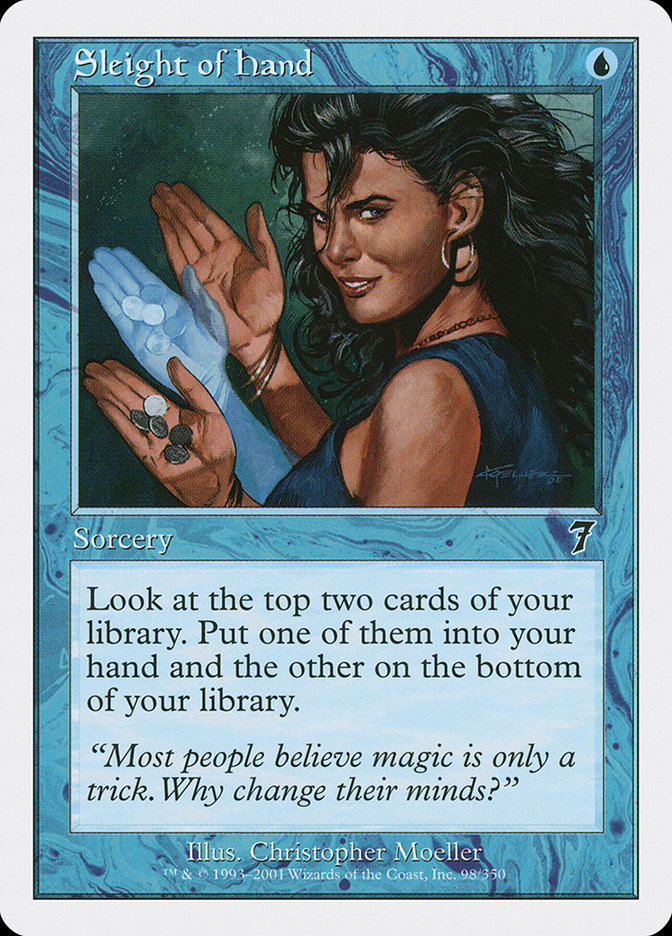 Well, fellow Magic players, this is as deep as the rabbit hole goes. These are the cantrips we are allowed to play with in Modern. There aren’t any better
ones. Don’t bother trying unless you’ve discovered a deck that values things differently, like Grisly Salvage or some other such nonsense. It doesn’t get
any better than this. Sigh.

The mana base of this deck is the most “rough around the edges” aspect of the deck composition to this point. There are, however, a couple of things we
know for sure. We need a lot of basic lands to be able to handle the demands of our Search for Tomorrow. We need two Valakut, the Molten Pinnacle for the
purposes of comboing off with Scapeshift. We need at least ten Mountains to be able to reliably trigger Valakut when we combo. Fetchlands are not great
because we want both a low land count and access to many Mountains. After that I’m not exactly sure of the color-source math because things get very
complicated when dealing with cards like Explore, Manamorphose, Search for Tomorrow, and blue cantrips. I have not had many problems with the mana while
testing the deck but I admit to the possibility of some of these numbers not being perfect.

There are some issues this deck has with the speed and consistency of the other decks in the format, but the sideboard goes a long way toward solving some
of these problems. I will list each card and some of the matchups it will be relevant toward, but the board is by no means locked in and has to potential
to change with more testing. 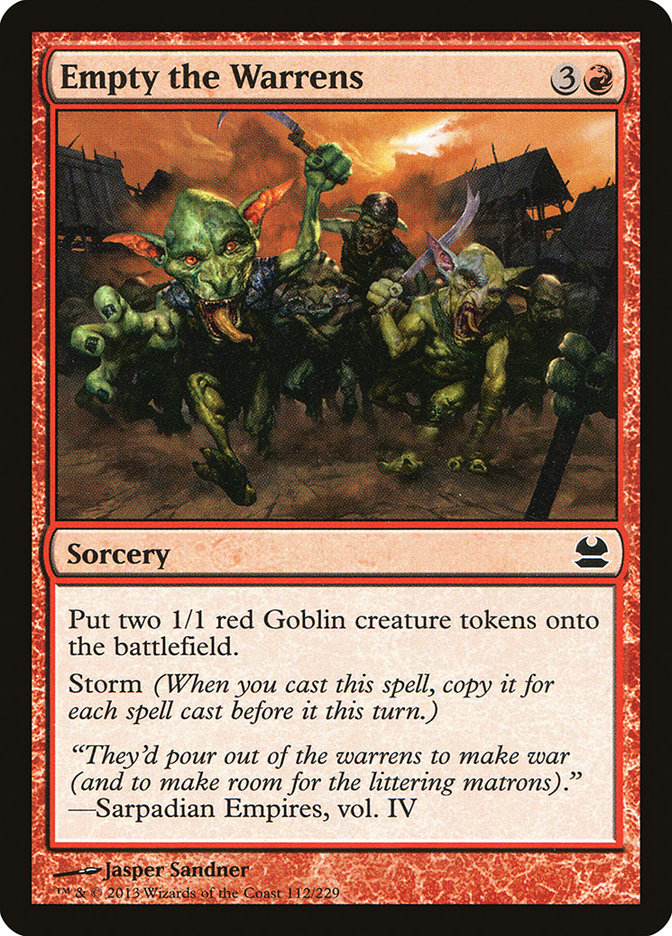 This is a card that you bring in the spots where the opposing combo deck is faster than you on a consistent basis and also in the spots where opposing
control decks have the angles that you are presenting covered. This can happen via a combination of graveyard hate and something like Leyline of Sanctity
or counterspells. 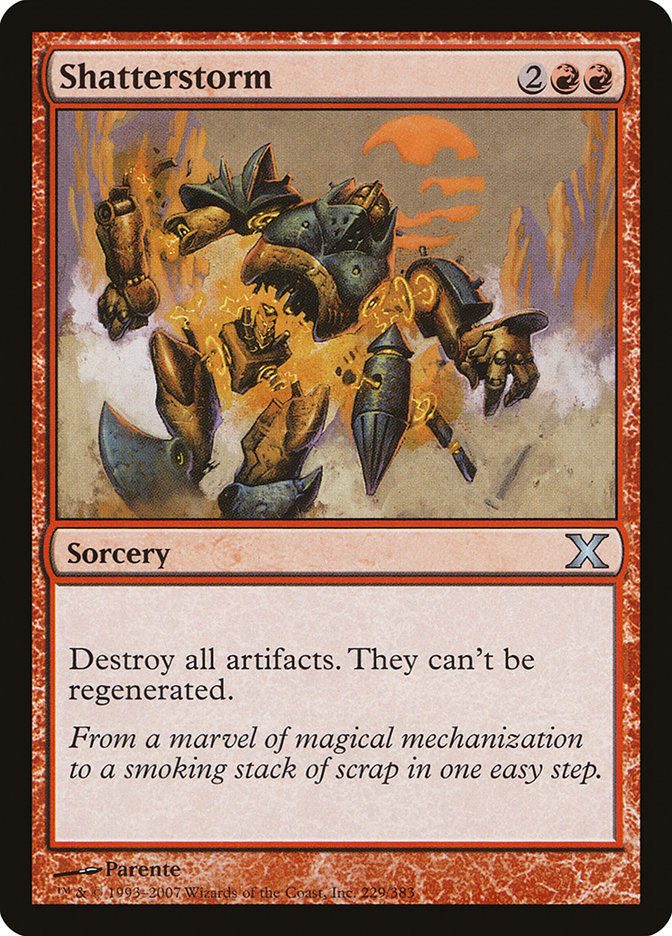 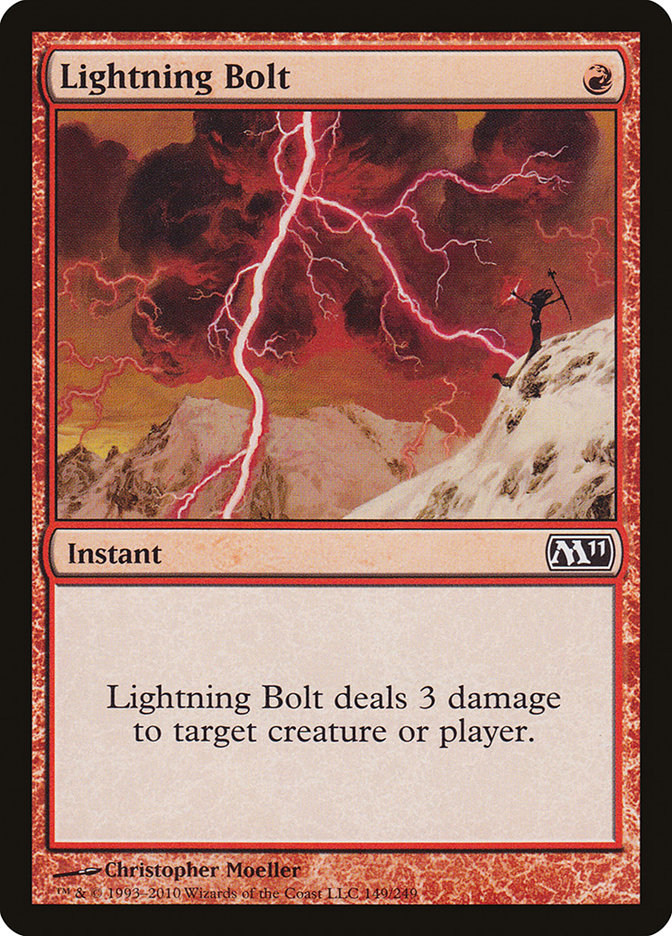 Sometimes creature decks can present a clock that is faster than ours as well, like Zoo, Affinity, and Melira Pod; or they can use their creatures to hate
out our combos like G/W Hatebear, or Merfolk. 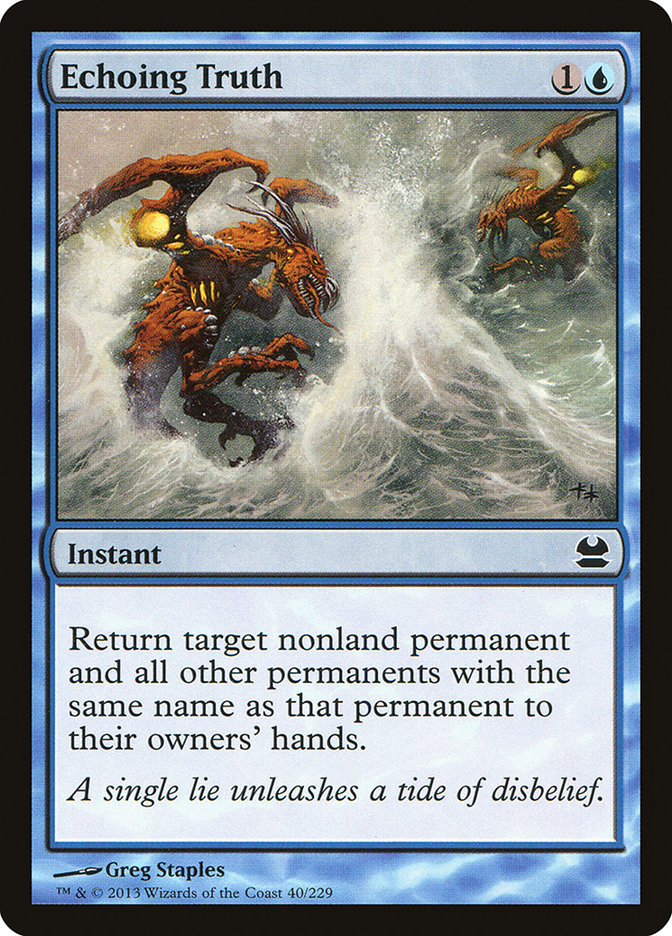 Having one of these in the 75 of a Storm-based combo deck is essential. Opponents with access to white mana will many times have copies of “Prison”
enchantments like Rest in Peace, Suppression Field, or Leyline of Sanctity that will sit in play and prevent us from killing them. The good thing is that
many of these problem permanents will still allow us to rifle through our deck until we hit our single copy of Echoing Truth and kill them on the spot.
This allows us to get away with only one copy of Echoing Truth while still having this angle covered. 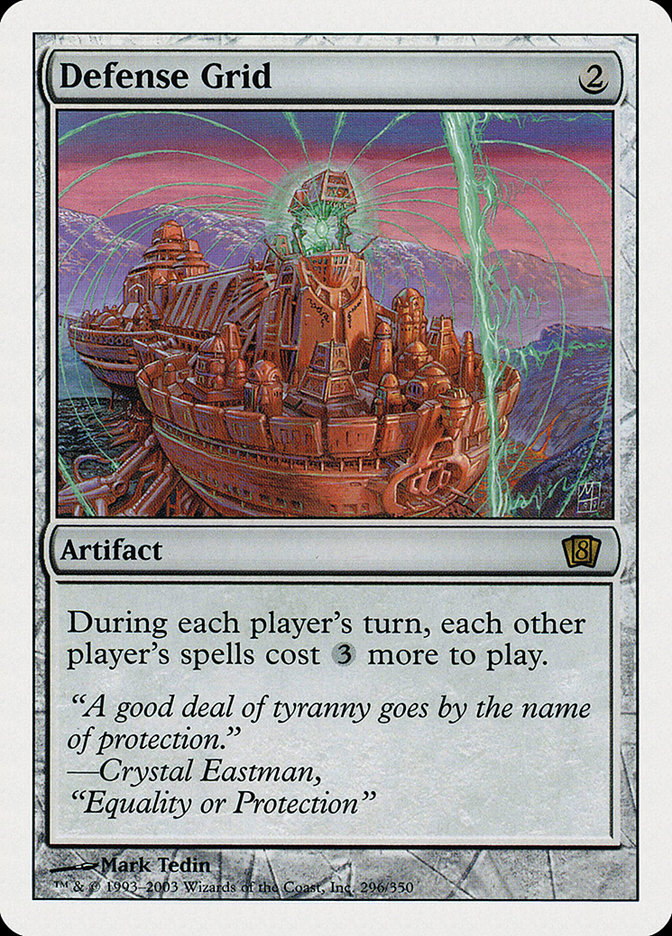 Admittedly, some of the control decks can interact with us in a grindy counterspell sort of way. Defense Grid is a hedge against these strategies as well
as other combo decks with control elements like Splinter Twin and traditional Scapeshift.

Some of my favorite moments in Magic are when sicko players that fly under the radar come up with innovative and off-the-wall ideas that are based to some
degree in reality. Andrew Calderon and Stormshift fit this model perfectly and I can’t wait to see how this handles a diverse Modern format going forward.
It’s been a long time since we’ve seen something come together as fluidly as Dark Depths/Thopter Sword, but I think we might have a real contender in
Stormshift. Shuffle it up and try it out! I promise it is not as clunky as you expect.

I will be in Minneapolis this weekend for the

Werewolf games, so feel free to say hello if you want to join a game or just talk about Modern!