If you’re interested in becoming a better player or getting your hands on the latest tech, Insider Trading is not for you. This column is dedicated to the game outside of the game; the one that takes place when you sit down across from another player, flip open your trade binder and get ready to deal.


Have you ever wished that you could know which cards were really going to be the chase cards of the newest set… before you traded them away? You will.

Would you like to get inside the heads of the most experienced traders, and find out what makes them so good at what they do? You will.

Are you ready to start maximizing every Magic: the Gathering deal you make? Well, you get the point.

Every day, StarCityGames.com sells a tremendous volume of Magic: the Gathering singles. As we do, our robust database allows us to track incredible amounts of sales data and spot trends as they are developing. We take advantage of this information to stay one step ahead of our competitors, and StarCityGames.com Premium members can now utilize this same information to give themselves an edge when trading. While there’s no guarantee that the demand for these cards will last, these are the Betrayers of Kamigawa singles that have been in the most demand so far! 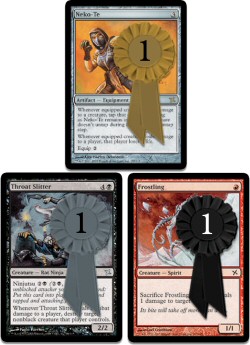 8. That Which Was Taken

I am a dealer, and because I am, you should never want to trade with me. After all, I always have to come out ahead, so you are never going to get a good deal, right?

Years ago, I learned what I consider to be the secret to successful trading. I’ll reveal the secret in a second, but first, two quick scenarios:

Dick had been playing Magic for years, and was a very shrewd trader. On the other hand, Bob was fairly new to Magic, and had come down to the local store to meet a few friends. Dick noticed that Bob was carrying a trade binder, and asked him if he was interested in trading. Bob replied, letting Dick know that he was working on an angel deck, and might be interested in trading for any angels he may have to spare. Dick answered, saying that he did have an angel is his trade binder, and would be willing to trade it. Bob’s eyes lit up as Dick opened his trade binder and pulled out a Tormented Angel. Having not seen it before, Bob told him that he wanted it, and slid his own trade binder across the table. Dick flipped through the binder and quickly pulled out a Spiritmonger. Sensing Bob’s naivetÃ©, Dick discreetly proposed trading card-for-card. Bob read the text on the Spiritmonger, but since he only played mono-color decks, agreed to the trade.

Afterwards, Bob noticed that the store was selling Spiritmonger for ten dollars. Out of curiosity, he asked how much the store sold Tormented Angel for. The storeowner replied, “Twenty-five cents”. Bob suddenly realized that he had gotten a bad deal, let Dick know that he had changed his mind and asked for his Spiritmonger back. However, Dick was unwilling to reverse the agreed upon trade. Not wanting to cause a scene inside the local game store, Bob simply resigned never to deal with Dick again. Minutes later, his three friends arrived, and Bob immediately warned them not to trade with Dick either.

Dick’s probably quite proud of himself for having made such a killing… but did he?

Let me walk you through this trade again, substituting John for Dick.

John had been playing Magic for years, and was a very shrewd trader. On the other hand, Bob was fairly new to Magic, and had come down to the local store to meet a few friends. John noticed that Bob was carrying a trade binder, and asked him if he was interested in trading. Bob replied, letting John know that he was working on an angel deck, and might be interested in trading for any angels he may have to spare. John answered, saying that he did have an angel is his trade binder, and would be willing to trade it. Bob’s eyes lit up as John opened his trade binder and pulled out a Tormented Angel. Having not seen it before, Bob told him that he wanted it, and slid his own trade binder across the table. John flipped through the binder and quickly pulled out a Spiritmonger.

John let Bob know that he was interested in the card. However, since John knew that a Spiritmonger was worth significantly more than a Tormented Angel, he offered to let Bob select some additional cards besides the angel. Bob looked through John’s binder again, and asked about a Shivan Dragon. John let him know that there was actually a second one beneath the first, and that he would gladly give up both of them, plus the Tormented Angel, for the one Spiritmonger. Bob read the text on the Spiritmonger, and was quite surprised to be offered two Shivan Dragon and a Tormented Angel for a card that he didn’t even play with! The two agreed to the trade. Afterwards, Bob noticed that the store was selling Spiritmonger for ten dollars! Out of curiosity, Bob asked how much the store sold Tormented Angels and Shivan Dragons for. The storeowner replied, “Twenty-five cents on the Angel and four dollars each on the Dragons”. Bob saw that the value of his trade was just about even and remembered that he had been ready to trade the Spiritmonger for just the Tormented Angel! He appreciated that John treated him fairly, and as his three friends arrived, he sent them over to trade with John. 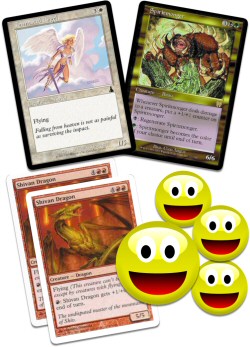 Who really came out ahead here, Dick or John? Some would say “Dick”. I would say “John”, by far. By not taking advantage of Bob’s lack of pricing knowledge, John has already made one successful trade, received immediate referrals that may have lead to more successful trades, likely acquired several long-term trading partners and gained positive word of mouth that may net him even more future trades. That adds up to a lot more than the $9.75 “profit” that Dick made from his one “killer” trade, and its why John not only did the right thing, but also made the better business decision.

No matter how you add it up, its simply not worth being a, well, you know.

As for what I consider to my greatest trading secret…

Seem obvious? Absolutely. However, if you’ve ever overheard someone bragging about how someone he had just traded with “didn’t have a clue” what cards were worth, it is apparently not that obvious to some people.

That may sound like a radical concept to some, but I honestly believe it to be the most important “strategy” you can employ if you plan on being a long-term trader, It may be hard to remember when someone’s offering you an amazing rare for some random card that’s been languishing in your trade binder for the past year, but if you go out of your way to treat that person fairly, you will likely reap much greater benefits over the long-term. Trust me.

There are twenty-five commons (yes, commons) that should be in your trade binder right now. If they aren’t, you’re likely missing out on some very profitable trading!

These cards are currently appearing in many of the top Extended decks, and if you plan on attending an Extended PTQ anytime soon, you will likely find many players frantically searching for some of these cards before the event begins. When this happens, the law of supply and demand will kick in and you will likely be able to get some amazing trades for these cards.

However, this will also present you with a dilemma similar to the one I discussed above. If you make completely a unreasonable trade request, the person you are trading with may be “forced” to accept your terms, but then feel like you took advantage of them and decide never to trade with you again. If you’re goal is to maximize your profits over the long-term, remember that you want to always treat people fairly.


Do you have a topic you’d like to see me discuss or a question related to the business side of Magic: the Gathering? If so, please send it to [email protected] with the subject line “Insider Trading Question”.

Who knows? It just might show up in the next column!