There’s a lot about this deck that I really like.

I think the mix of removal is very good. All the spot removal answers large creatures like Thing in the Ice and Death’s Shadow. I like the focus on exiling, and I think Devour Flesh is really well-positioned because it’s so good against Selesnya Hexproof and Death’s Shadow, as well as serving as a versatile answer across the board, especially when paired with Cry of the Carnarium, Path to Exile, and Nihil Spellbomb to answer recurring threats. 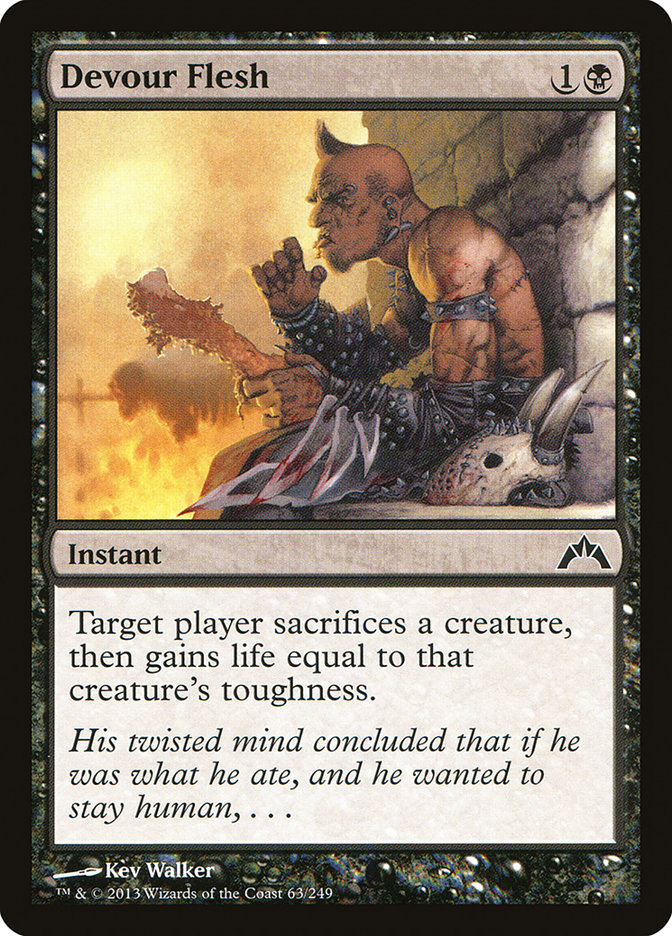 I think the planeswalkers are all very good, and I had much better results with the basic strategy of using removal to protect planeswalkers than trying to pair removal with card drawing to try to trade one-for-one forever. I just have to play too many more lands than my opponent, so I end up flooding out despite a little more card draw, and drawing creature removal against decks where it’s bad is too much of a liability. I needed to be proactive in a way that planeswalkers are, and Thief of Sanity did a great job.

Cry of the Carnarium’s heart is in the right place. I wanted a cheap sweeper that exiles things to answer Bloodghast and Arclight Phoenix, but answering those with a sorcery is not ideal, and I really missed not answering Prized Amalgam compared to Anger of the Gods. As a result, the Dredge matchup, which I hoped might be okay because I had so many ways to exile things, was very bad. 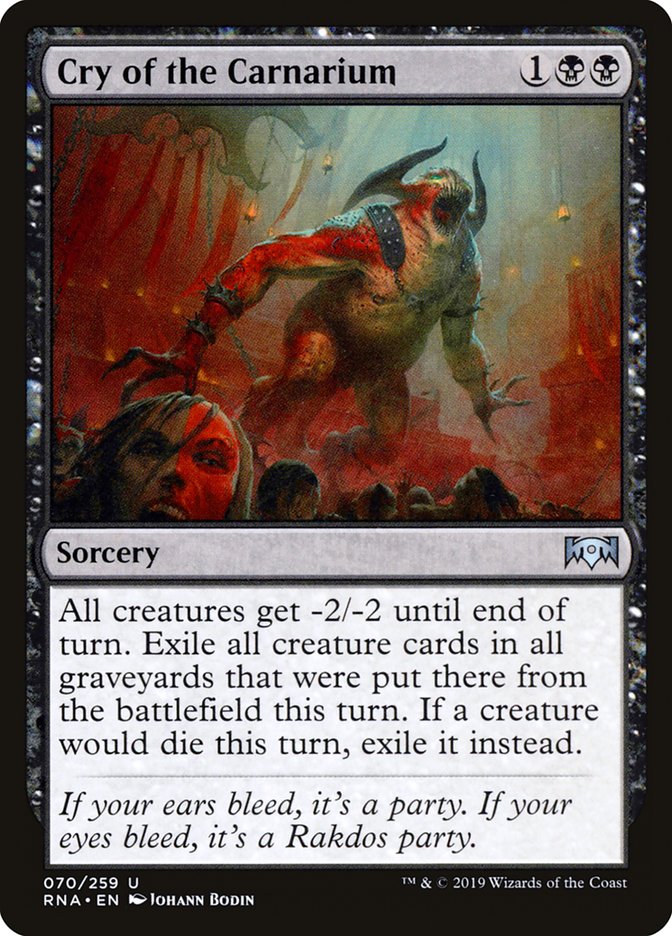 This deck is really good against the threat-light creature decks like Golgari Midrange, Death’s Shadow of all varieties, Izzet Phoenix, and even Selesnya Hexproof, but struggles against other control decks, Dredge, and Tron. Given that, I started thinking it was probably ultimately invalidated by Tron in terms of win percentage against various shares of the metagame, which is to say, I didn’t know which matchups I could expect to get where I’d expect to win more of them with Esper Control than with Tron, so I moved on.

My plan at this point, Monday before GP Tampa, was just to play Dredge again, but somehow I started thinking about Lantern Control. I knew Ensnaring Bridge was well-positioned, both from the success that Whir Prison has been experiencing and just by looking at the decks that are doing well, but I didn’t want to play Whir Prison because I don’t like how much it struggles with Shatterstorm, don’t have any experience with it, and don’t really like the way it plays out. With Lantern, you make a lot of small decisions and take a lot of actions, and with Whir Prison, your cards don’t really do anything; you just cast your spells and your artifacts sit on the battlefield and nothing happens and you hope your opponent can’t do anything, which isn’t as fun for me.

The Whir of Invention build of Lantern was almost universally accepted as the correct way to play the archetype after it was popularized by Piotr Glogowski, but I have a lot of experience with both that build and the older versions of the deck that play more colorless lands, and I expected the older version to perform better in the current metagame. 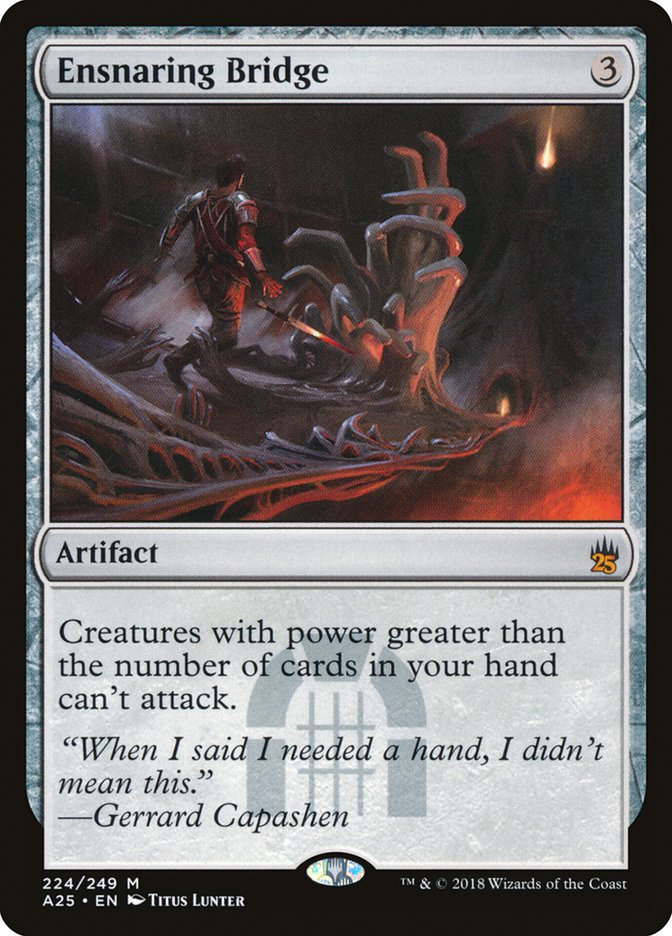 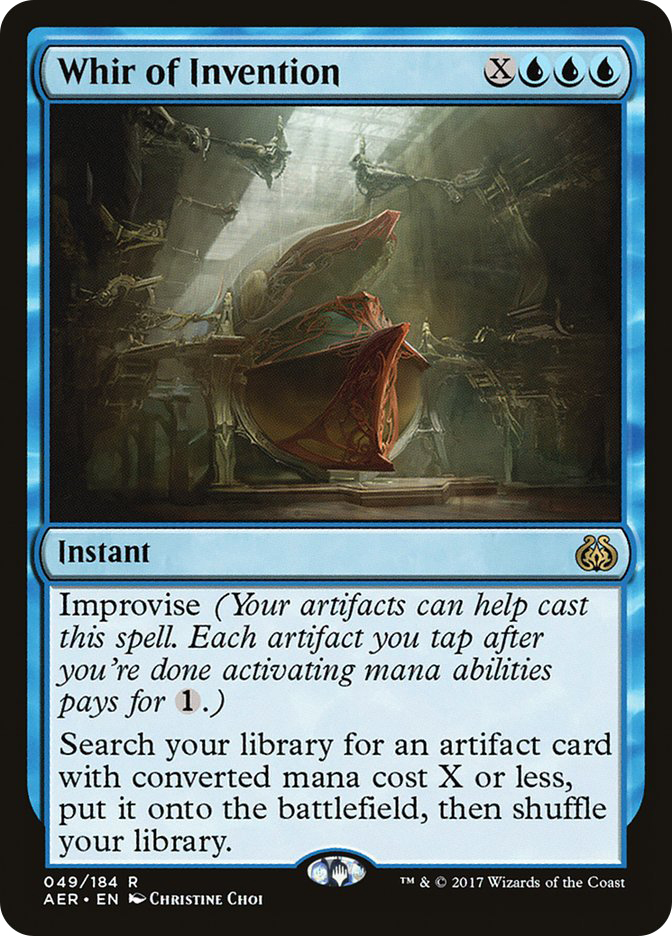 The biggest advantage to not playing Whir of Invention is that you get to play more colorless lands – an additional copy of Academy Ruins and Inventors’ Fair, as well as Ghost Quarter. Ghost Quarter is extremely important against Tron, which has always been an absolutely horrible matchup for the Whir build, but which the older builds could beat reasonably often.

The Whir of Invention build can’t play as many other nonartifact spells because it needs to maximize artifacts to use for improvise, which means there isn’t room for Surgical Extraction. Surgical Extraction is great in the current metagame, as should be apparent from the number of other archetypes that are playing it in their maindecks now, which substantially favors the build of Lantern that can support playing it.

This whole package that uses and interacts more with the graveyard makes me like older Lantern’s positioning at the moment. Specifically, I think that this build of Lantern is far better than Whir builds of Lantern against Tron, Whir Prison, and other Lantern decks (not that I expected to play against those).

In exchange, it’s a little bit worse at quickly finding Ensnaring Bridge, which makes it worse against Humans and other fast aggro decks. I expected Izzet Phoenix to push most of those decks out of the metagame, and I felt that this approach would be good enough at finding Ensnaring Bridge to win most of the matchups where it’s good, while picking up a lot of percentage points against some decks I thought would be important to beat.

The other change that I made was adding Kaya, Orzhov Usurper to the deck. The biggest reason for this is that it answers Chalice of the Void, which is fantastic against Lantern, as Lantern has 29 spells that cost one mana, but Kaya also answers Noble Hierarch and Signal Pest, which are traditionally troublesome creatures due to their ability to sneak through an Ensnaring Bridge, and the incidental lifegain is very helpful as a lot of decks try to finish out the game with their remaining burn spells after Ensnaring Bridge comes down.

Also, Kaya combines with Pyxis of Pandemonium (as it counts the face-down exiled cards for the ultimate ability) as well as Ghoulcaller’s Bell and Codex Shredder loading up their graveyard for Kaya’s +1 ability, and especially with Nihil Spellbomb for a relatively fast lethal ultimate, which, in addition to closing out games against opponents that might be able to get through your lock somehow also helps win matches in time, and avoided at least one draw for me in the Grand Prix.

Given all the above reasoning, I registered this:

The Grand Prix was weird for a Modern event in that I didn’t play against very many decks, but maybe that’s the new normal, given Faithless Looting’s apparent free pass and Izzet Phoenix’s metagame share. I played against five Izzet Phoenix decks; two Grixis Death’s Shadow decks; Eldrazi Tron; Colorless Eldrazi (no Tron lands, just utility lands); Ad Nauseam; two Dredge decks; and an Affinity deck with Chalice of the Void. I lost twice against Arclight Phoenix and once against Death’s Shadow. Most of my losses involved my Ensnaring Bridges getting exiled with Surgical Extraction.

My tournament ended with a loss in two games against Death’s Shadow in which my opponent took Ensnaring Bridge with Inquisition of Kozilek on their first turn and then exiled my Bridges with Surgical Extraction. I believe I likely could have actually won this game, but I approached it wrong. Knowing that I could never get an Ensnaring Bridge onto the battlefield, my first hope was to lock them out with Lantern of Insight (I sideboarded down to two of them, but happened to have drawn one), but my opponent countered it. Then I found Crucible of Worlds and Ghost Quarter and tried to lock them out with that. 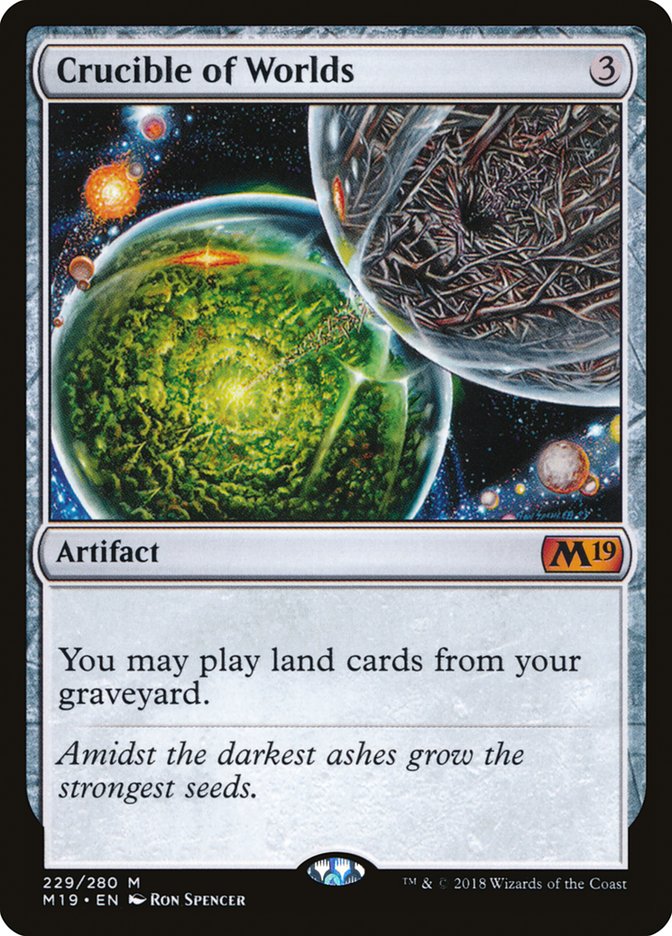 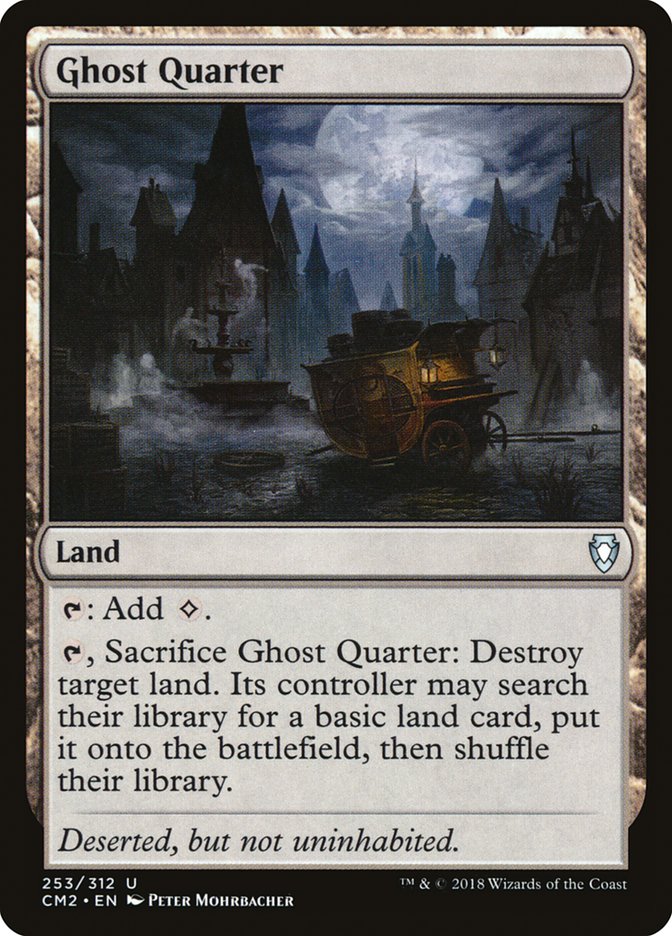 This was a mistake.

The first step to that process is to destroy the lands they have and let them find their basics. In this case, my opponent was on a draw that didn’t have any cantrips, so doing this just allowed them to cast a Gurmag Angler that I didn’t have an answer for.

Unfortunately, I didn’t find this line until it was too late.

Moving forward, the one change I know I want to try is adding Liliana of the Veil to the sideboard, probably over Nature’s Claim, because I think it will help with making it possible to win more fair games like this against Death’s Shadow and Izzet Phoenix after my Ensnaring Bridges have been answered. 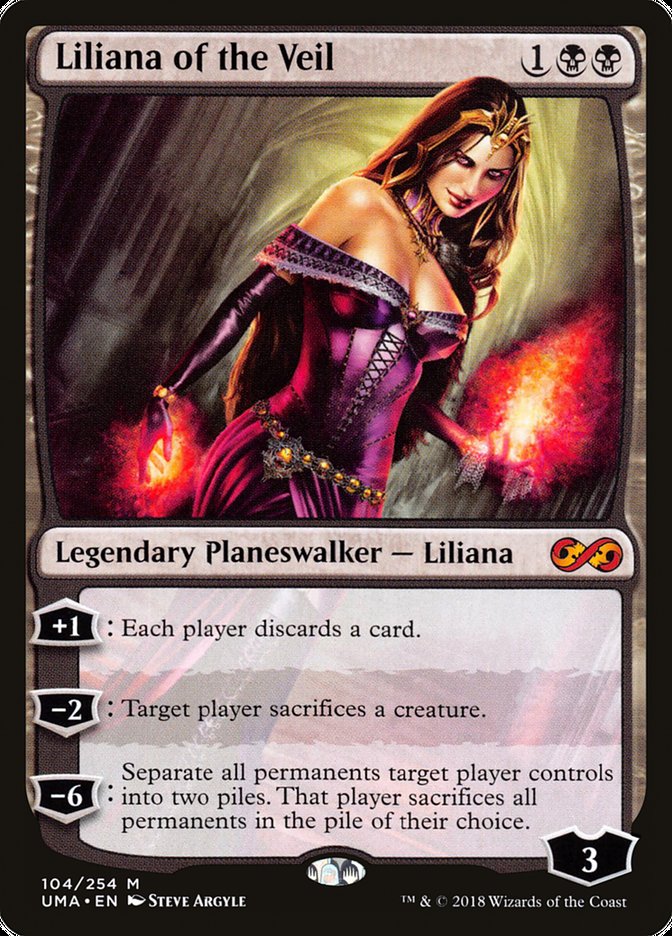 Regardless, I like Lantern’s positioning and I’ll continue to work on it, but there’s still a lot of time and anything could happen between now and then.