The barrier to entry in Standard is quite high, but one of the early previews from Aether Revolt appears to be up to the challenge: Heart of Kiran. 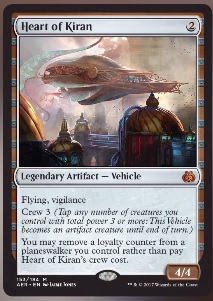 The card is immediately evocative of Smuggler’s Copter, as they’re both two-mana Vehicles that represent significant evasive pressure and combat superiority in the air. But there are some key differences to be aware of that give Heart of Kiran a different slate of potential homes.

Most glaring of these differences is the crew cost. “Crew 1” on Smuggler’s Copter means that nearly any creature can hop in and go for a joyride, and using a small creature that is being trumped on the ground by an opposing blocker is a great way to get reach in a swarming aggressive deck.

Heart of Kiran is a more complex piece of machinery and needs some added expertise to properly pilot. Or maybe you just need long legs to reach the pedals I don’t know. Either way, you need three power to get this thing off the ground, and that means you’re more than likely occupying another good attacker. To be aggressive, you’re going to need a creature with three power and a converted mana cost of three or less, and the list of those in Standard that have seen significant play isn’t that long. A quick search yielded the following list:

Unsurprisingly, the bulk of these creatures are red and/or white and fit into the existing R/W and Mardu Vehicles shells, making it the most natural home for an aggressively slanted Heart of Kiran. Personally I’d favor a Mardu list because Scrapheap Scrounger is very important, although balancing the vehicle count between Smuggler’s Copter, Heart of Kiran, and Cultivator’s Caravan will be tough. Here’s a first pass:

The addition of Heart of Kiran lead me to push the deck higher on the curve, eschewing Inventor’s Apprentice and maindecking the full four copies of Gideon, Ally of Zendikar. This is certainly a fine place to start, but it’s clear to me that this deck is the result of slotting a new card into a reasonable shell rather than trying to build specifically with the card in mind.

New sets that don’t come with a rotation tend to create that effect because the established decks in the metagame aren’t going anywhere. It’s comforting to start with a template that has proven itself in the past, but rarely is that the best way to go. Aether Revolt Standard is going to be different from Kaladesh Standard, even if decks like Mardu Vehicles, B/G Delirium, and W/U Flash stick around, and there will be new cards that are sufficiently powerful to breakthrough in the format on their own merits rather than piggybacking on the strength of a known archetype.

In the case of Heart of Kiran, the key to unlocking its potential is in the last ability:

You may remove a loyalty counter from a planeswalker you control rather than paying Heart of Kiran’s crew cost.

This is unlike anything we’ve seen before. Loyalty on planeswalkers has heretofore only been used to activate the abilities of planeswalkers, and bringing that resource into the greater economy of Magic is going to make assessing its value much more difficult.

I see a lot of potential in a Vehicle that can attack and block without the aid of a creature. It means your attacks are more threatening, and due to vigilance, you can attack all-out and still have a defender back for your planeswalker.

Unlike Smuggler’s Copter, Heart of Kiran doesn’t want to play with small creatures; it wants to be in the bigger shell of an aggressive midrange deck alongside efficient planeswalkers. The planeswalkers that pair well with Heart of Kiran are going to be high-loyalty with the plus ability (or abilities) being relevant so you can fuel the alternate crew ability. You also need cheaper planeswalkers (say, three or four mana) so you can build loyalty and start crewing as soon as possible.

The Gideons in the Vehicles list are a good start, but I think Nahiri, the Harbinger is the best fit.

After its first activation you’ll have six loyalty, plenty to use your Heart of Kiran on offense and defense. As noted above, red and white also have enough solid three-power creatures to crew it in case your opponents load up on Ruinous Paths and To the Slaughters to try to answer your planeswalkers directly and strand your Heart of Kiran.

With that in mind, here is my initial list:

Okay, there’s a lot going on here and much of it revolves around Nahiri, the Harbinger and Heart of Kiran. Thalia, Heretic Cathar is the perfect bridge between the two cards, letting you crew the vehicle on turn 3 and setting up your opponent’s next creature to immediately be exiled with Nahiri’s -2 before you start rummaging toward more gas and attacking for seven damage a turn.

Eldrazi Displacer is a little trickier, and the splash for its ability is far from ideal, but I think it’s better here than something like Depala, Pilot Exemplar. Blinking Veteran Motorist is an easy way to gain value from your early plays later in the game, which is critical for midrange decks. Also, like Thalia, Heretic Cathar, Eldrazi Displacer sets up your Nahiri to kill the creature, since that creature re-enters the battlefield tapped.

There’s also a cool trick you can run with Eldrazi Displacer and Gideon, Ally of Zendikar. You can +1 your Gideon, attack, blink it after combat, and use another ability to get double the activations. You don’t build any loyalty, since it resets to four when re-entering the battlefield, but the extra Knight Ally tokens will help protect it.

Finally, blinking Archangel Avacyn, especially after it transforms, is a very powerful interaction that can win a lot of games. This deck is going to have some trouble transforming Archangel Avacyn, but the singleton Selfless Spirit can be accessed via Nahiri, the Harbinger if necessary. That may seem like a weak play, but it curves nicely, since turn 4 Nahiri into turn 5 Avacyn lets you ultimate and find Selfless Spirit for a transformation on the very next turn, which should be a useful line of play to have against more aggressive decks that may look to ignore your planeswalkers and instead pressure your life total.

This deck is going to be great at protecting its planeswalkers and can turn the corner very quickly, since its three-drops prevent blocking and all of its threats hit very hard. Midrange decks need to be able to close games quickly in this format because the threat of Emrakul, the Promised End is ever-present, but that doesn’t mean you can’t grind with the best of them if necessary. You don’t have any traditional card draw, but planeswalkers and Eldrazi Displacer provide a snowballing advantage in longer games that can compete with the likes of Glimmer of Genius and Torrential Gearhulk.

The card I worry about most is actually Ishkanah, Grafwidow. Eldrazi Displacer is great at clearing out the Spider tokens but not so much at answering the 3/5 itself, and should you not have a ready answer, your offense outside of Gideon, Ally of Zendikar can be stifled. Fortunately, if you can answer the tokens, Veteran Motorist pumps your Heart of Kiran to a 5/5 that can attack effectively into Ishkanah, so the situation is far from hopeless.

Aether Revolt is sure to have more exciting, powerful cards, and likely some cards that will fit into this shell. I would be happy to see a three-drop that can supplant Eldrazi Displacer to avoid the messy splash (or a mana fixer that can clean the mana up a bit) or another cheap creature to move the deck in a more aggressive direction should Aetherworks Marvel continue to pressure decks without counterspells to be faster.

But more than keeping an eye out for new additions to your deck, it’s important to look out for paradigm-shifting cards. Players who bring last season’s decks to Week 1 after a set release tend to find themselves behind the players who put in the work at finding the newly enabled strategies that the existing metagame is ill-equipped to handle or that most players dismissed as unviable.

There’ll be a lot of people dismissing new cards and decks because they don’t think they can compete in the current metagame. It’s easy to remember sets like Born of the Gods that failed to make much of an impact, but most of the time Standard is a highly dynamic format where new sets cause significant change.

If, like me, you weren’t a fan of Kaladesh Standard, the end is nigh. It’s time to put on your brewing caps and get to work.