The first point of note is that both of Domri Rade’s other two abilities punish control decks. Its +1 generates significant card advantage so long as your deck is properly stocked with creatures (not a problem for Gruul decks) and the ultimate is unbeatable going long, so Domri Rade is not a threat control players can ignore. This combo helped to balance the card, since the -2 was most impactful against opposing creature decks, meaning it was going to be relevant in every matchup. 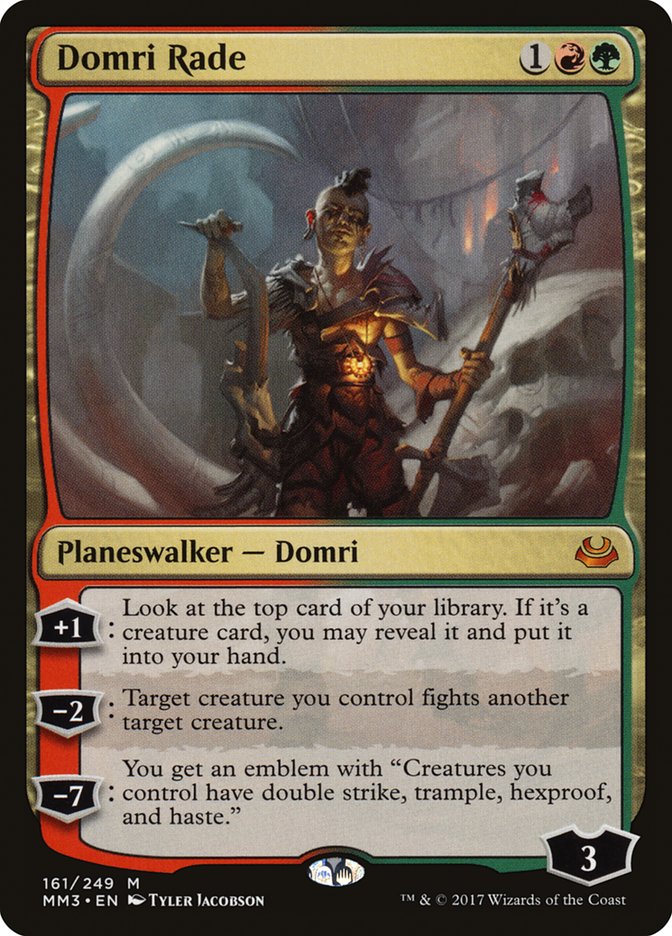 Domri, Anarch of Bolas is narrower in application, but still quite powerful. They both promote a much more aggressive gameplan, since rather than generate card advantage while working towards a powerful ultimate, they both facilitate generating an early advantage on the battlefield. The +1 adding mana lets you develop your battlefield faster, while the static ability ensures those creatures hit hard or at least trade effectively in combat.

Domri Rade typically went into midrange aggressive decks, and Domri, Anarch of Bolas tilts further down to the aggressive end of the spectrum, though the acceleration aspect means we don’t want to sacrifice too much from the high end of the curve to facilitate going wide to leverage the static ability, since we’ll have extra mana lying around.

Perhaps most importantly, Standard has Llanowar Elves to power out Domri, Anarch of Bolas on Turn 2, much like Elvish Mystic did for Domri Rade a few years ago. Neither Domri protects itself that well, so landing early greatly increases its chances for survival. It also allows for the use of Domri as a secondary mana accelerant, which can enable casting five-drops on Turn 3 without negatively affecting the deck’s threat density.

There is a tension with the newer Domri encouraging both going wide with the static ability and going tall in order to have better creatures to fight with the -2. When this kind of dissonance happens, you typically have to pick a lane and stick with it while including some measures to utilize the aspect of the card that isn’t stressed by the deck’s main plan. That’s what the two decks I’m presenting today do, with the first highlighting Domri’s fight ability:

This deck draws heavily from the Gruul Aggro deck at the beginning of the article (it wasn’t just a humble brag!) with several cards that have easily parallels from the older list. Zhur-Taa Goblin reads and plays a lot like Flinthoof Boar. Incubation Druid acts as the second mana creature instead of Gyre Sage, though the presence of Domri means we don’t need to play that many copies. 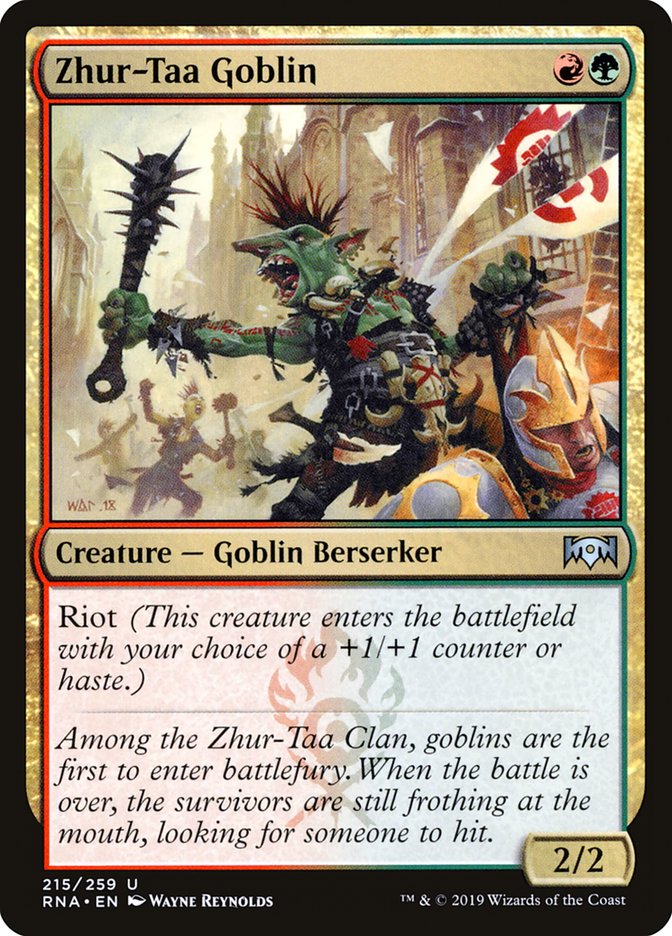 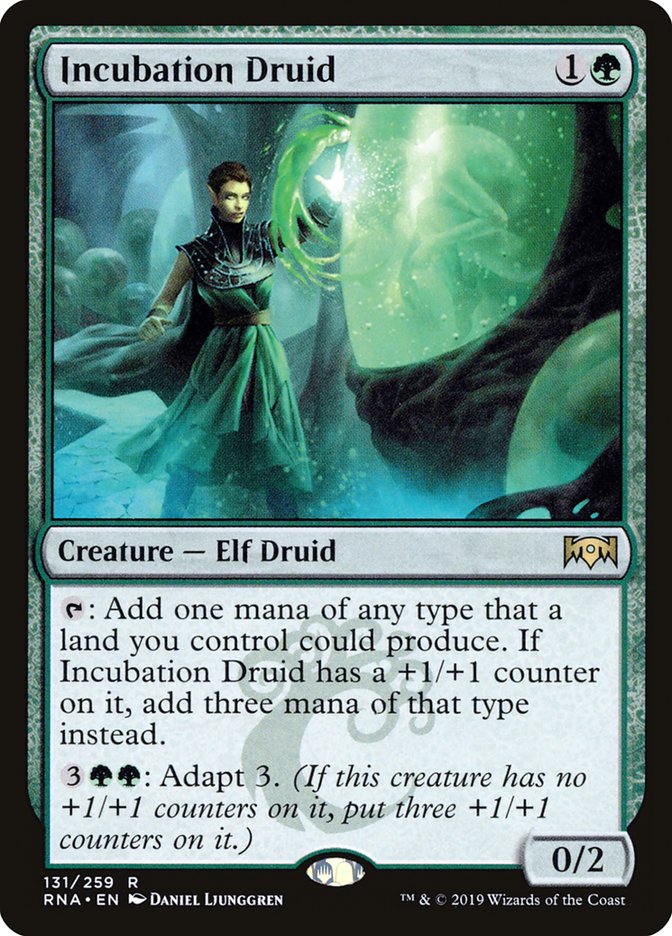 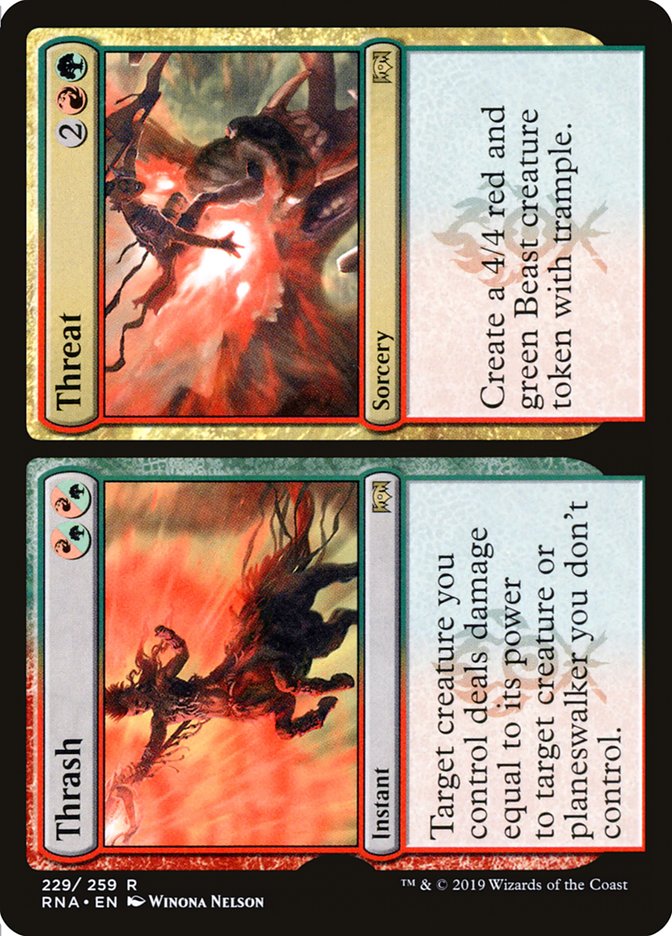 Thrash is our Ghor-Clan Rampager, a split card that ensures we have enough threats against removal-heavy decks and enough tricks to dominate combat against other creature decks. Rekindling Phoenix, Sarkhan the Unmastered, and Skarrgan Hellkite replace Hellrider, Thundermaw Hellkite, and Wolfir Silverheart as the high-end threats.

Notably, Rekindling Phoenix is a much better fighter than Hellrider and generally a great fit for this kind of deck, since spending your early-game accelerating out a powerful creature only to lose it to a Cast Down leaves you very far behind. In fact, only Skarrgan Hellkite trades poorly with most removal spells, which is even more important given that this deck doesn’t have anything to recoup the card advantage of Domri Rade. It needs its threats to live and make an impact. 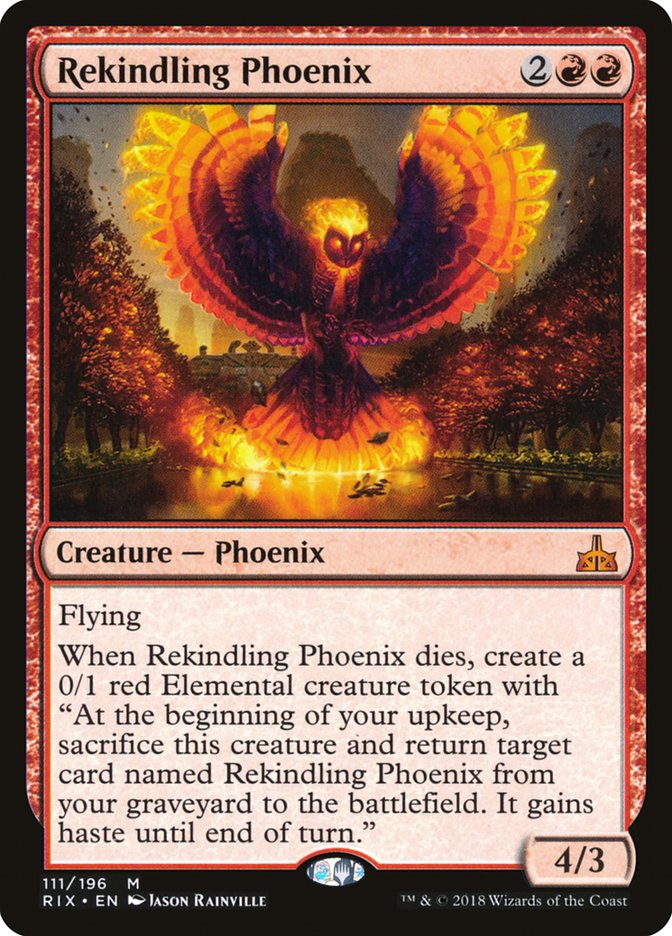 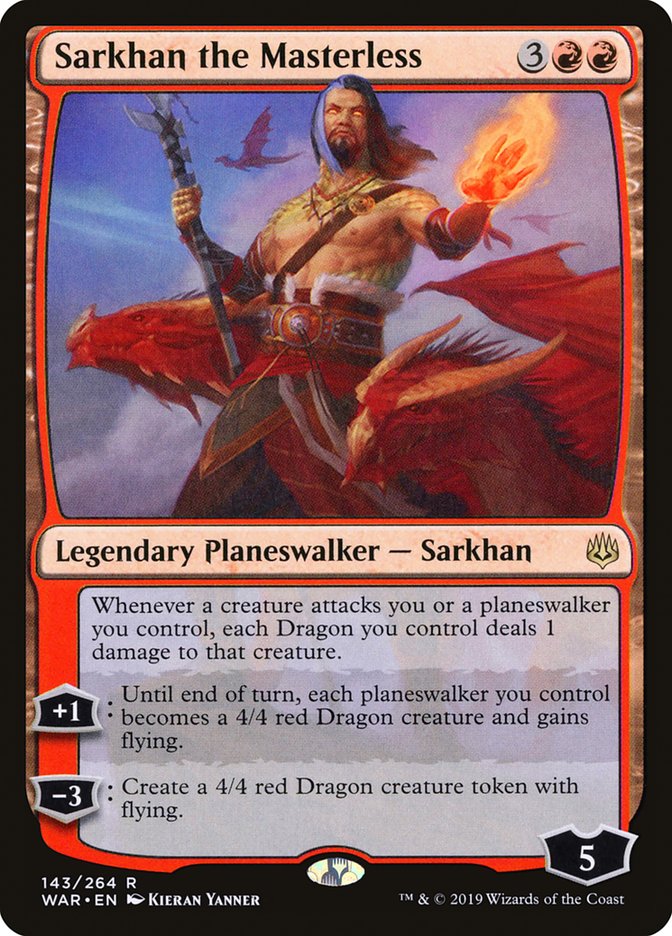 I’m particularly intrigued by Sarkhan the Masterless in this deck, since casting it on Turn 3 with Llanowar Elves and Domri, Anarch of Bolas leads to the +1 turning Domri into a viable attacker, or you can simply make a Dragon token, be insulated from one-toughness attackers, and set up for a huge fifteen-point swing with your three Dragons.

That attack is coming on Turn 4, by the way – an impressive curve that doesn’t take a lot to come together. Maximizing Sarkhan’s +1 is part of the reason the singleton copy of Samut, Tyrant Smasher in the maindeck and the two sideboard planeswalkers made the cut. Having the potential to create an immediate attacker with the +1 means few planeswalkers are safe, and you have the reach to close out games quickly against control and Wilderness Reclamation decks.

This list is great at going tall and fighting smaller creatures, but giving your large flyer an extra point of power isn’t particularly exciting, though sometimes it will mean a dead Vivien Reid rather than one on one loyalty. In order to utilize every part of Domri, Anarch of Bolas, I’ve included four copies of Krenko, Tin Street Kingpin. 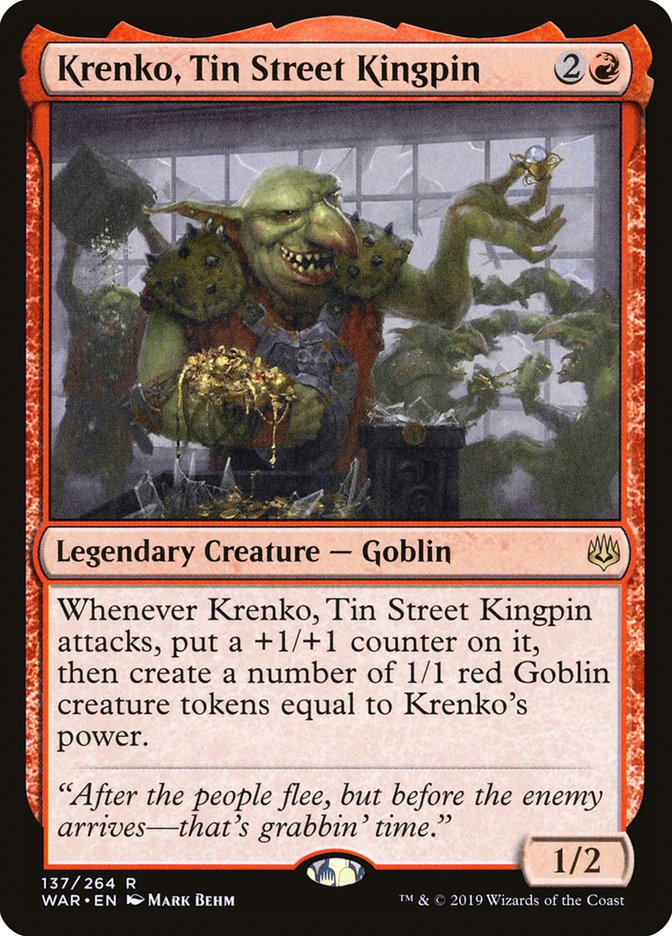 While Krenko reads like a go-wide card because it generates lots of tokens, it does so as a standalone threat, so in practice it’s going tall by going wide. Krenko demands an answer but will die to a lot of commonly played removal, though notably not Cast Down, so it’s no Hordeling Outburst. But critically it’s a go-tall threat that, by virtue of the unorthodox way it goes tall, plays incredibly well with Domri, Anarch of Bolas.

A solo Krenko will on its first attack generate three extra power, one from the +1/+1 counter and two from the pair of Goblin tokens it creates. The second attack generates four more power because the extra point of power leads to a third Goblin being created, leaving a total of eight power on the battlefield.

Contrast that with a Krenko supplemented by Domri. The first attack adds seven power to the battlefield, since it will create three tokens instead of two and each of those tokens is now a 2/1. The second attack then generates two more power than the first, so nine, leaving a battlefield of seventeen total power.

For the mathematically inclined, the generating function for power on the battlefield after N attacks with Krenko is:

When you include Domri, the generating function becomes:

I can be fancy, too, Frank.

The power of Krenko is what motivates the maindeck copies of Collision, which also serve to clear flyers out of the way of the larger creatures. Notably, you can follow up a Krenko with Domri and then use the +1 to generate the necessary mana to cast Colossus, leading to a seven-point attack and seven 2/1 Goblin tokens. That’s enough to present lethal damage on the following turn, and with Llanowar Elves this curve can happen as early as Turn 3.

What made the Gyre Sage deck above effective was that it was capable of explosive draws that would end the game very quickly, yet had enough powerful threats that it could recover from early disruption. This deck maintains that duality, which makes me optimistic for its chances in War of the Spark Standard.

The second deck is much more of a go-wide strategy, but still utilizes the mana acceleration from Domri in order to power out Siege-Gang Commander:

Siege-Gang Commander gives us something powerful to accelerate into that also takes advantage of Domri’s static ability. It even functions as a nice mana sink for the extra mana from Domri’s +1, which the previous deck didn’t have beyond the singleton Skarrgan Hellkite. Like Krenko in the first list, Siege-Gang Commander ties the room together with regards to leveraging every part of Domri, Anarch of Bolas.

The rest of the deck is built around Siege-Gang with other Goblins, though notably Legion Warboss takes the place of Krenko, since the latter gets significantly worse without Llanowar Elves casting it ahead of schedule and Colossus to pump it. Skirk Prospector can allow for three-drops on Turn 2, but that’s quite the gamble with Krenko, whereas Legion Warboss will often leave you with a 1/1 if it dies before you untap. 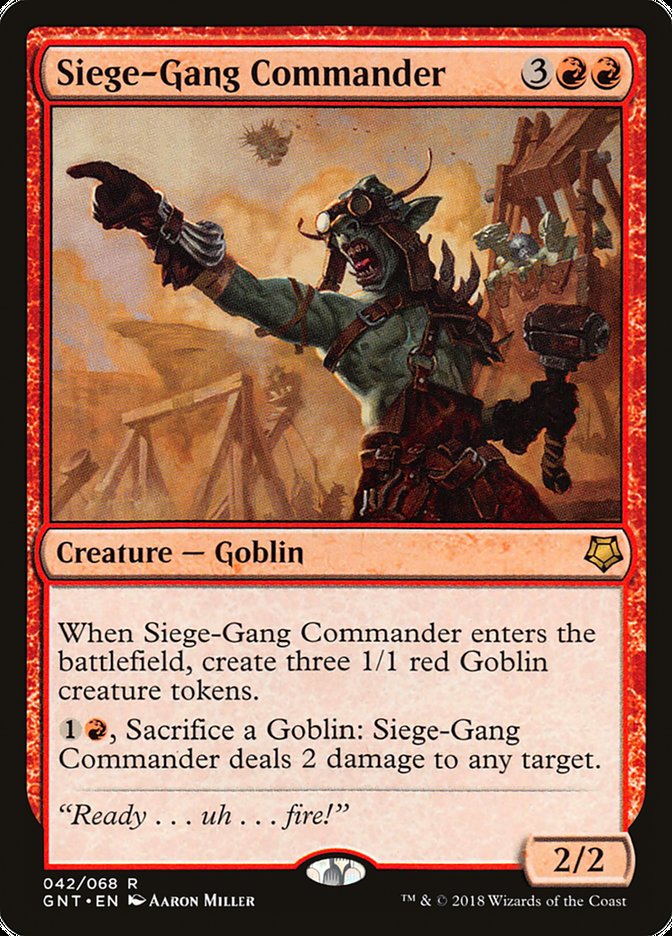 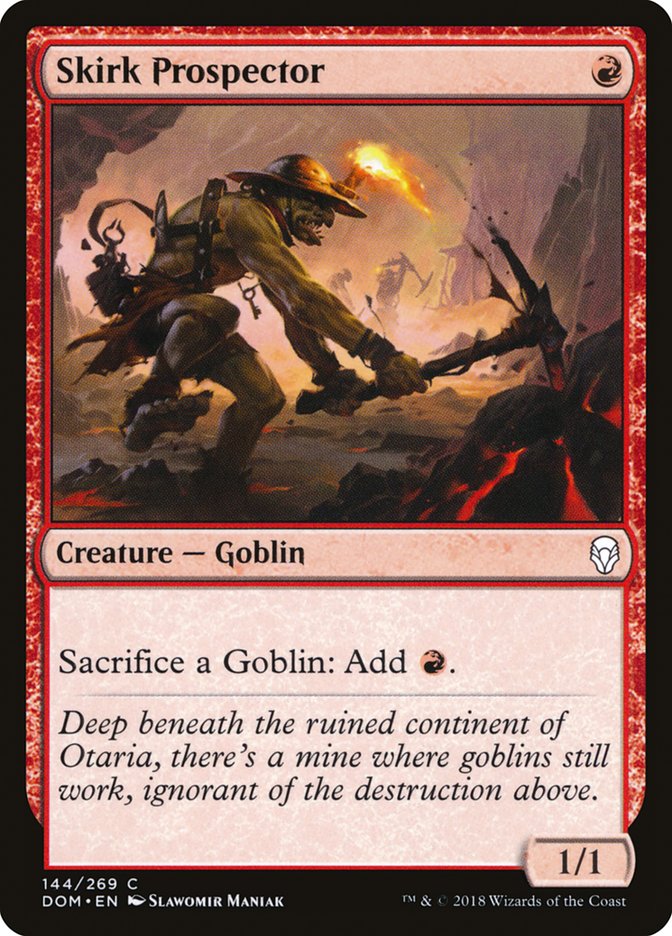 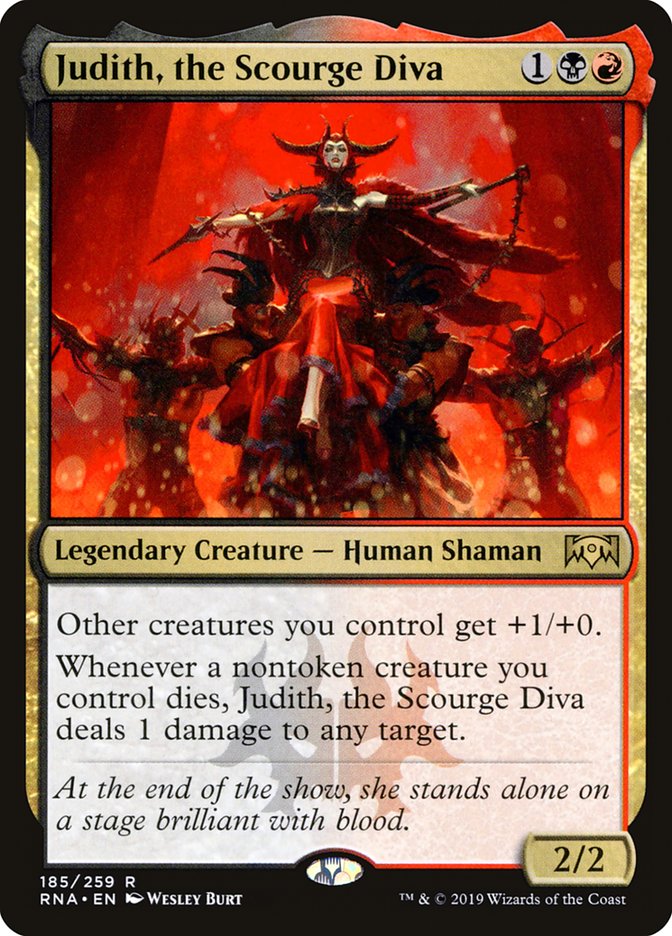 I’ve stretched the mana to include Judith, the Scourge Diva as another Anthem effect, which not only makes cards like Goblin Instigator more appealing but helps to give us some bodies that are large enough to at least trade when fighting with Domri’s -2. With multiple cards that make multiple bodies, we’re going to have Goblin tokens lying around, and trading one for a problematic creature will make it very difficult to race this deck, while winning through attrition will almost certainly require a sweeper or Goblin Chainwhirler.

Judith provides added reach, accentuating Fanatical Firebrand and Siege-Gang Commander, so any deck relying on blocking is going to have a tough time without significant lifegain. The combination of Wildgrowth Walker and Finality out of Sultai Midrange could pose some issues, which is why I’ve included the Rekindling Phoenix and Chandra, Fire Artisan in the sideboard over some other sticky threats.

It’s easy to overlook Domri, Anarch of Bolas because it’s not a particularly flashy card, but a single point of power makes a huge difference in the quality of most creatures, especially those at the lower end of the curve. I would posit that the only creatures in the above two lists that would see play in Standard with one fewer point of power are Siege-Gang Commander, Rekindling Phoenix, and Goblin Chainwhirler, and that may be an overestimation. Adding another point of power doesn’t have as great an effect as subtracting one, but it’s still significant.

There are some deckbuilding hoops to jump through if you want to take full advantage of the card because of how the static and the -2 abilities pull you in different directions, but the cards are there to make it through those hoops, so I don’t see that as much of an obstacle. Even Domri Rade required your deck have at least 26 or so creatures to leverage its +1, which not only limited deckbuilding but also sideboarding.

We’ve already seen Gruul Aggro decks have success in this Standard format, and while these lists don’t share much with what that deck is doing, Domri is powerful enough to have a new Gruul deck built around it. And should it lead Gruul back into the spotlight, all the disappointment of Gruul players from Domri, Chaos Bringer will be forgotten.

After all, Gruul players are a simple bunch. They don’t want anything fancy. They just want to Gruul.