Thanks for agreeing to come on the hunt with me today, my dear chap. Unfortunately, we won’t be hunting for squeegees as I had originally indicated. I will admit that the whole squeegee thing was somewhat of a ruse, as I feared you wouldn’t come along if I told you what we would be stalking. It is just as elusive and much more terrifying. I am not referring to that illustrious beast, the Wumpus. No, this creature is much more maniacal, insidious, and almost impossible to catch. If I manage to snag one of these beauties, it will be the pinnacle of my career.

That beast I am talking about? It is the dreaded mistake.

Ah, yes, the mistake. Probably the most prodigious genus on the planet. I have an entire bookshelf in my study dedicated to the defining traits of every species of mistake that has been discovered to date. Did you know that there are over one hundred different mistakes that exist within the first three turns of a single game of Magic? I surmise that I could spend an entire year solely devoted to the study of erroneous mulligans.

But such early-game mistakes are trifling, a mere songbird compared to the rhinocerous-sized misplays that we will be seeking. You see, many people out there believe that Magic defeats are incurred due to an accumulation of errors that culminate in such a poor board position that the end result is a loss. For amateurs who do not understand the basic elements of Magic strategy, this may be the case. However, for those more effective players, such notion is truly a fallacy. It is a well-informed player that knows there is a single decision, a pivotal play that will either tip the game towards victory or send it spiraling out of their control. This is the mistake that we search for today.

Slow down, dear fellow. We can’t just go jumping into every game willy-nilly and hope we chance upon these mistakes. We need to choose our games carefully, lest we spend three fruitless weeks chasing poor players, bad decks, or just downright rotten luck. We must pick and choose games with the proper conditions that might be hiding these crucial mistakes that are very deadly and so often overlooked.

I think it is time to begin our first lesson on mistake hunting. Life totals are a primary indicator of games gone awry. You are correct in thinking that final life totals less than ten are prime candidates for consideration; however, there is a whole realm of life-gaining effects that disguise immeasurably narrow defeats. Rather, we must partake in a more thorough investigation of such essence throughout a series of turns. We must be looking for significant changes in momentum. I do believe I have some old tracking data from my last excursion around here somewhere, just give me a moment.

Annals of Land Management 1991-1994? Nope. A Beginner’s Guide to Catching a Bluff? Interesting – I haven’t shot a bluff in almost five years. That was a rewarding expedition. I’ll have to take you on one of those hunts someday. To see the surprise when you catch a bluff with his pants down! Oh, I am sorry – where were we? Ah, yes, tracking life total. I do believe I have some old tracking data from my last excursion around here somewhere, just give me a moment. The Use and Care of Interrupts? Those creatures are extinct, you know – hunted to death by a few overzealous judges. I really should throw that book away. Trapping and Disposing of Poor Opening Draws? I think I am in the correct vicinity. I recall it residing just below this map to the secret rooms in Magic Online. “Life Tracking of Kamigawa Events, November 2004 – January 2005.” Ah, we have found the spoils!

In here are the life total notes of over 5,000 matches I have been investigating since the first introduction of Champions of Kamigawa to the public eye. I have delineated the pages of significance with these neon-colored adhesive flags. First, let me calibrate your sensitivities to the observance of life by introducing you to a typical scenario:


Can you decipher the specific notations that indicate a rather dreary and uneventful duel? The initial one- and two-power creatures that inflict four to eight points of damage are to be expected, correct? The consistent sources of damage depict “Me” as maintaining control of the game, very good! There is another trait you need to be aware of – do you recognize it? Ponder upon what led us to this discussion… Life totals! By jove, I shall make a hunter out of you yet! Clearly, there are no significant changes in trends of life totals over the course of the game. “You” suffers a steady stream of damage, while “Me” sustains only minor injuries before stabilizing.

Now that you’ve witnessed a game in which the balance of power has not shifted hands, let me introduce you a much more intriguing find:

Magnificent! Such a stunning depiction of a tidal wave quelled! A reversal of power! Can you pinpoint the exact moment that a mistake may have struck? Don’t be ashamed, my dear friend, it takes a little practice getting an eye for things like this. You can see the initial back-and-forth game, “You” doing a few points measly points of damage with Kami of the Waning Moon, while “Me” answers with his own three points of damage from a Silent-Chant Zubera and a Brutal Deceiver. Very good, you noticed that “You”‘s life total reversed from a Swallowing Plague; however, notice that “You” is still taking quite a bit of damage, while it appears that “Me” might not have suffered yet. Somewhere around that 11- or 9-point mark, “You” has wrested control of the game. See the dramatic shift in “Me’s” life totals with each wave of attack compared to the amount of damage “You” is receiving? That is the quintessential indicator of which participant is in the dominant position. That atrocious mistake probably reared its head a short time following the appearance of the Swallowing Plague.

You think you see the mistake? I agree with your assessment that the Kami of the Waning Moon was the primary contributor to “Me”‘s demise, most likely giving the Scuttling Death a free pathway through the element of Fear. I concur that “Me” may have been able to maintain dominance had the Kami been properly disposed. “Me” should have used the Yamabushi’s Flame targeting the Kami of the Waning Moon instead of “You”? A keen sense of perception you have there, my friend. However, you have fallen into the typical trappings of the novice – assuming such mistakes are readily apparent without recalling the exact state of the game. Let me offer the actual circumstances that refute your assumption:

“Me” plays first, a turn 2 Zubera and a turn 3 Deceiver. “You” misses the third land drop. On turn 4, “You” is at 16 life, drops a third land and plays Waking Nightmare. With no targets on the table, “Me” has no choice but to target “You” with Yamabushi’s Flame or risk it falling into the graveyard. “Me” swings for another three points of damage on turn 5, but “You” removes the Brutal Deceiver from the game with a Swallowing Plague on the next turn. Finally, out comes Kami of the Waning Moon and a host of other threats while “Me’s” advance has been halted…

… the rest of the duel was a blur after that. I had stopped for a fraction of a second to relieve my parched throat when the beast had struck. I resumed my surveillance of the game too late. “You” had cast a Wicked Akuba and attacked with two Kami of the Waning Moon and a fear-smitten Scuttling Death to win. That rascal’s paw prints were everywhere, eluding me once again.

We are going to get him this time, though! With a second pair of eyes – that’s you, old chap – we’ll be able to keep a continuous watchful eye on the next duel we attend. Those five months of research have not been futile. I have found one entity that seems attract a propensity of game-altering mistakes. Goes by the name of la_mills. Fairly nocturnal, her primary habitat is in the League Room. Tends to come out only on weekends to gorge on Magic. I have selected this evening for our safari deliberately to maximize our chances of encountering a mistake. Today marks the last weekend of the holiday leagues and my records indicate la_mills has four matches until completion. We can expect at a minimum eight opportunities to bag ourselves a trophy.

The time is currently twenty hours and thirty-five minutes. At exactly twenty-one hundred hours, I will meet you in sector 478688 of the Leagues Room in Magic Online. Be sure to bring a video capture system, a head-mounted radio communication device and some breath mints. I will supply the hunting rifle, mistake restraints, some low-calorie liquid refreshment and a bag of Cheetos. Screw your courage to the sticking place – I am confident tonight will bear fruit!

You are three minutes late, old bean. None the matter, for I’ve located la_mills. She’s in the northeast corner of her lair, two rows across and three tables down from the head banner. She’s in a tussle with a being named Qarlo and badly bruised from a ten-point Devouring Greed. They’ve just finished sideboarding and are at the attack again. Let’s sneak in for a closer look. Quietly, now. I don’t want to scare any mistakes away.


La_mills is attacking ferociously, a Kashi-Tribe Reaver and Cursed Ronin are keeping Qarlo on the defensive. My word, is Qarlo bloody. I don’t believe a Hankyu and a River Kaijin will help him survive at six life. Good Lord! Did you just see that? Qarlo summoned a Dragon! I haven’t chanced upon one of those since I was but a swaddling babe! Quick, engage the video recorder! We’re about to witness an epic battle! 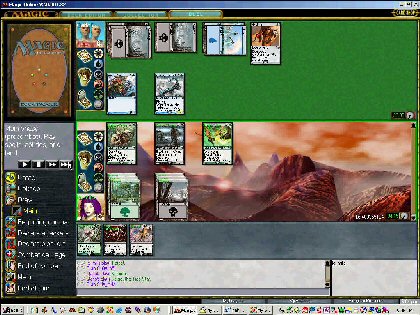 This scenario brings to mind the old adage, “Never go face-to-face with a dragon, for you will always lose the fight. Better to find your way around it.” All la_mills has to do is cast the Cruel Deceiver and pass the turn. If Qarlo doesn’t play another creature, a timely Befoul on the River Kaijin will…

… blast it, why are you interrupting me? She’s what?! Let me get my sights trained – yes, there it is! Look at that mistake! La_mills is attacking with everything! Hold steady…steady…fire! We’ve got it! Qarlo blocks the 5/5 Cursed Ronin with Keiga and steals the Kashi-Tribe Reaver. The Sakura-Tribe Elder is sacrificed to the River Kaijin. That mistake just devoured la_mill’s entire offense. Poor thing never recovered.

What a beauty – must be an eight-pointer at least. Definitely deserving of a place over my mantelpiece. Adrenaline still pumping through your veins? Quite an exhilarating sport, isn’t it? Now that you’ve been indoctrinated into the realm of mistake-hunting, I think you’re capable of pursuing such creatures on your own. Cheerio and good luck, my friend!