Some nights my sleep isn’t sound. I wake up on the wrong side of midnight and stumble to the bathroom. After I get a drink of water and do the same
half-blind shuffle back to bed, I will invariably check my phone, if for no other reasons to stop the blinking alerts. Most nights it’s mindless emails and
the occasional Mets update, so I can ignore the chirps.

Two weeks ago, I decided to check what the fuss was about. Gavin Verhey had tagged me with regard to his new article. Needless to say, I was happy to check my updates that
night.

Not only was Vintage Masters going to release some cards on Magic
Online as common for the first time, but the digital-only set was going to be giving us cards with some serious Pro Tour pedigree. To wit:

This deck took down the Odyssey Block Pro Tour way back in 2002. While Pauper has a larger card pool than two-set Block, it also has cards with a lower
power level than, say, Upheaval. The enticing thing about adapting this deck to modern-day Pauper is that the entire creature suite is going to be legal
come the Vintage Masters release during the Ides of June.

Full disclosure: I have tried to make U/G Madness a thing in Pauper before. Way back in

my first article for this site in 2006

, I posted my then working list for the deck. While the stakes were lower and the card pool was smaller, the deck still won its fair share of player-run
events at the time:

If that deck looks a bit odd, it should. Ravnica lands like Dimir Aqueduct were everywhere (being the latest set) and that, in turn, made cards like
Boomerang far more attractive. The format was far more aggressive so the maindeck Golgari Brownscales were a concession to the ubiquity of Incinerate
(since Lightning Bolt was not a thing back then).

So what does Pauper 2014 have to offer U/G Madness that Odyssey block and PDC 2006 don’t have?

● Better mana: Today Pauper has a true dual land in the form of Simic Guildgate and a source of card advantage in Simic Growth Chamber. The deck can also
access Terramorphic Expanse and Evolving Wilds. The liability of being two colors is lessened in the modern era.

● More graveyard mechanics: Time Spiral and Innistrad blocks both featured Flashback as a mechanic. Cards like Think Twice and Silent Departure provide
important options for any deck that wants to seek value from the graveyard. Oona’s Grace is a solid option for any deck that does not need a ton of mana to
operate. Heck, even Drudge Beetle and Kathari Screecher can get in on the action of they want!

Of course, Pauper in 2014 does not have access to some of the game-breaking spells available to Ken Ho’s championship deck. While Roar of the Wurm is
slated to appear in Vintage Masters, its rarity is not yet known. Given the card’s power level, I doubt it will see a printing at common, even in this
high-octane set.

A boy can dream, though.

Getting back to the task at hand, the question exists as to why we should look to build this deck in the current Pauper format. To me there are two
standout reasons to explore the depths of this tried and true strategy. 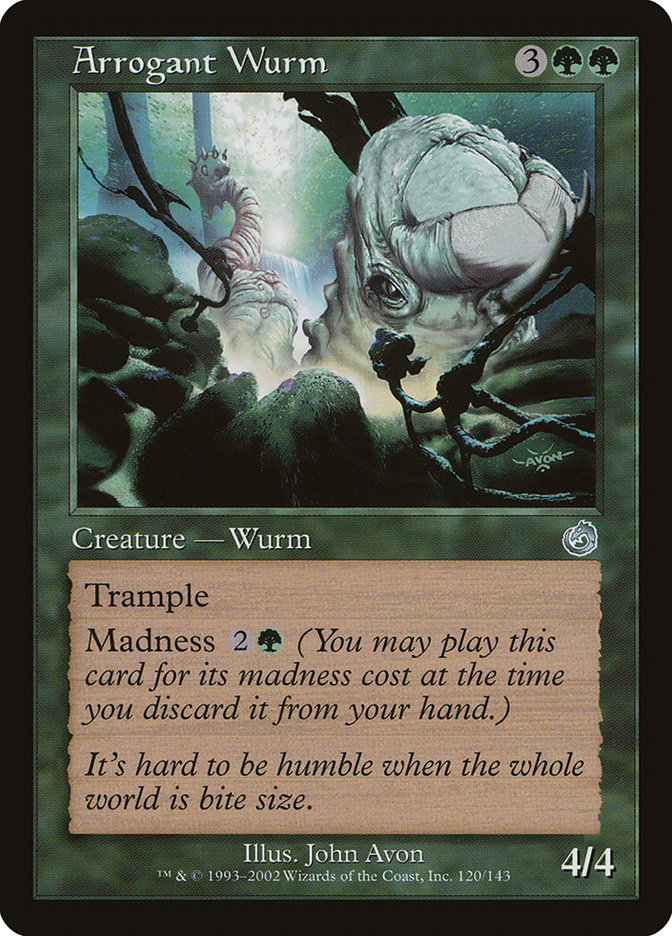 First is Arrogant Wurm. At full price, Arrogant Wurm would not be anything special; Stampeding Rhino and Fangren Hunter both exist and see no play. With
access to Wild Mongrel, Aquamoeba, Merfolk Looter, and Waterfront Bouncer, well, things can get silly. Arrogant Wurm does fail the Flame Slash test, but does that really matter if it is
cast at instant speed? My guess is no. Decks that run Flame Slash do so to fight pure beaters, the club to which Arrogant Wurm belongs; however, being able
to come out at the end of an opponent’s turn and then attack immediately is huge. The vast majority of blockers in Pauper have four toughness or less and
those with high toughness rarely have similar power. This turns Arrogant Wurm into a serious threat in its own right.

However, it is still vulnerable to removal. While going mono-green and pairing the Wurm with Vines of Vastwood and Ranger’s Guile is enticing, the
potential for blue card draw and more comprehensive counters has a strong pull. Circular Logic provides non-mono-blue decks with a powerhouse counter and
Deep Analysis and Think Twice play very nicely with the cards that enable our Madness twins.

The other reason to build this deck is to inject some new blood into the Pauper metagame. Arrogant Wurm looks to be a powerful threat in the format and one
that will deserve a shot. New decks always do good things for a format and Pauper is currently in need of help. The lack of regularly occurring events that
fire is not a good thing. Considering the vibrancy of the format as recently as October of last year (also known as pre-crash), there is probably a player
base ready to get back to playing Pauper. The same article that announced these cards as legal also dropped the not
so subtle hint that Pauper is on R&D’s radar for supplemental product, which is a good sign for the format. I hope that the appeal of a new option, as
well as some new powerful cards, bring people back to the common way to play Magic.

Back on track, if we are going to build this deck, we will need to identify what it is our weapon is trying to do. While the long=term answer is going to
be “beat down,” the immediate answer is survive. If the goal is going to be eventually reduce life totals with Arrogant Wurm and Wild Mongrel, then these
creatures must be protected.

The engine of this deck is based around discard. Building the most direct version first means quads of the following:

What about Werebear? I’m not sure we are a Werebear deck. While filling the graveyard is a viable subgame when some of those cards become 6/6 creatures,
this line is less exciting given current options. As such, while we can seek to extract extra value from cards like Deep Analysis, focusing on filling the
graveyard may not be the direction to go. That being said, more 4/4s are better, and a few copies may still find their way into the deck.

Protecting the team falls to Circular Logic and friends. While Counterspell is the best way to say no, I’m more likely to start testing with Mana Leak due
to its easier mana requirement. Double-color casting cost spells make me nervous in two-color decks, doubly so when they are needed on critical early
turns. Mana Leak is still quite the card and should do a good job protecting early investments.

Deep Analysis seems like an automatic include, but I would hesitate to start with more than two copies, as they might clog opening draws that lack a
discard outlet. Playing off our instant-speed theme of Madnessing out Arrogant Wurms, Think Twice and Oona’s Grace both provide reasonable incremental
advantage options.

This gives us a starting point of:

As we will probably want 22 lands, this leaves eight spots to round out the deck.

First and foremost, the deck is going to need some way to punch through. Previous iterations of this archetype had access to Wonder to take the team to the
air. Pauper has no such card. Instead, the format of commons has access to some powerful bounce. Echoing Truth is a solid catch-all that has the potential
to provide some card advantage. Waterfront Bouncer is another card that plays nicely with Madness and can help break up board stalls. A two and one split
is probably where I will start.

The final five slots allow us some flexibility. Considering that Delver of Secrets is still a powerful strategy, this deck will want some early answers to
that buzzing pest. Piracy Charm is interesting, since it can be turned on the caster to enable a hasty Wurm in a pinch, but I would want to try a
one-and-one split of Vapor Snag and Unsummon at first, just to see how far we can push the utility of bounce. The last three spots feel like they should be
additional creatures to help advance our plan of killing the opponent. Two copies of Werebear get a shot as the additional 4/4. I want to try one
Shambleshark as well, just to see if the deck can evolve into some sort of flash hybrid.

This list is quite raw and has a lot of experimental choices. I could see this deck going in multiple different directions, depending on results.

The first option would be to go further in on the Werebear option. If Roar of the Wurm does end up being a common, it might make sense to replace some
number of cards with Thought Scour and Silent Departure to help enable Werebear and Roar while also gaining additional value.

If Shambleshark proves to be worth a slot, then U/G Flash becomes an option. In this build, Werebear likely goes by the wayside for more copies of the
Simic standout and perhaps some copies of Elephant Ambush and Ambush Viper. It is also entirely possible (albeit a bit outside the realm of reason) to go
full on Mono-Green Stompy Flash, substituting Fa’adiyah Seer as an additional (albeit awkward) madness enabler.

It is also entirely possible that U/G Madness is actually a green Delver of Secrets deck. Delver fills a similar role to Werebear (in Pauper at least) by
being a threat-first creature. This would of course bias the deck more towards spells, which in turn makes a card like Piracy Charm more attractive.

Delver Madness will probably want more spells to operate optimally. If I’m feeling like a real Simic and wanting to make some sort of mutant hybrid, this
is the way I’m going.

I’m incredibly excited by the addition of Arrogant Wurm and Circular Logic to the world of Pauper. In addition to the U/G Madness, these two cards also
give merit to U/R Looter il-Kor decks, U/B Madness decks, and G/B Vampire Hounds builds. The format is wide open and a little crazy would do a lot
of good.