While Golgari is definitely my true love, I have to admit having the urge to cheat with Selesnya. Green/White came close to winning me my second State Champs title a few years back, and I’ll likely have some sort of G/W concoction I’ll be trying out in the new Standard as well. 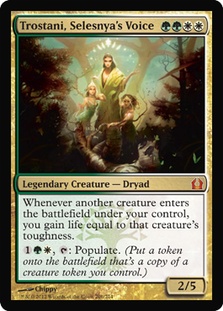 While of course I gave Jarad, Golgari Lich Lord a try first, I also think Trostani, Selesnya’s Voice makes a very appealing choice as well, especially for someone who is just thinking about giving Commander a try for the first time. Trostani isn’t an overtly threatening Commander (unlike Jarad), so playing her won’t likely put an immediate target on your head by the more experienced players around the board, and her abilities go a long way towards keeping you alive longer.

It can sometimes feel a little overwhelming building a 100-card deck using cards from among nearly all that have been printed in the history of Magic, so today I thought I’d focus mostly on cards from Return to Ravnica, the most recent expansion sets, along with cards easily available from Planechase 2012 and the Commander deck products.

Let’s take a look at how we can take full advantage of what Trostani has to offer.

The most fun aspect of Trostani is her populate ability. For three mana and tapping her, you get to copy a creature token you control. Since populate is the keyword ability for the Selesnya guild in Return to Ravnica, we’ve got all sorts of ways in the new set to focus on tokens and copying those tokens, so I’ll be sure to use them here. Of course, looking at some of the other sets there are more cards we can use too.

These cards all have the populate mechanic on them and seem perfectly fine for Commander play. There are some higher cost cards I could have picked too, but they seemed better suited to Limited play, so I didn’t include them here. I particularly like Rootborn Defenses in this deck, since one problem you’ll face playing this sort of deck is vulnerability to sweepers, and making your team indestructible is a real nice defensive move while getting to copy a token too. Druid’s Deliverance is nice to have to save your bacon from an alpha strike. Wayfaring Temple is quite nice if you can find a way to give him evasion. 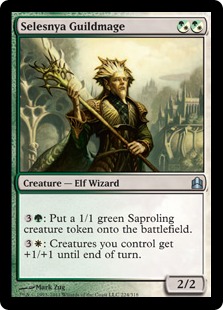 You can’t take advantage of populate if you don’t have token creatures to copy, so I tried to stuff quite a few ways to make creature tokens in the deck. Mimic Vat is particularly exciting, since you can potentially start making creature tokens of any sweet creatures your opponents play that die and then use populate to copy those tokens. Parallel Lives is custom-made to make populate awesome by doubling the effectiveness of cards that make tokens in the first place, and then making populate doubly good.

Thraben Doomsayer makes an interesting choice here and not just for its token-creature-making ability. While Trostani’s life-gain ability means you won’t often be able to take advantage of the fateful hour boost, it can make opponents who attack you a bit nervous.

For instance, if someone attacks expecting you to easily chump block, you could instead just take the hits and drop down to five life if boosting your team +2/+2 gives you the potential for killing someoneâ€”since the deck makes a lot of token creatures, this might be a good line of play. Just remember that Trostani’s life gain isn’t a “may” ability, so if you make a creature and gain life, you might suddenly move out of fateful hour range.

Speaking of Trostani’s life gain, she easily offsets the ping you’d take off Acorn Catapult if you were targeting yourself to make a Squirrel token.

Hornet Queen is going to do a lot of work in this deck, giving you a bunch of deadly flying blockers that you can keep populating. Who wants to attack into 1/1 flying deathtouch Insects?

I think Hunting Pack will surprise some people; keep it until someone takes one of those really long turns where they’re doing a bunch of stuff and casting a bunch of spells, or if two people get into a counter-war. Throwing Hunting Pack out there on the end of the turn can give you a ton of large token creatures to work with!

Gutter Grime is something that seems perfect for this deck, which is particularly vulnerable to sweepers. While you don’t get slime counters or Ooze tokens from token creatures that die, you’ve got plenty of non-token creatures that will likely die quite often during the course of the game. Over time, the tokens made by the Grime (that you can keep populating) will get quite huge.

If you can get your hands on a Doubling Season, it would obviously do a lot of good work in this deck! 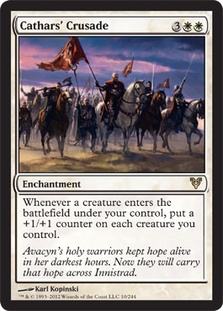 Even though Trostani isn’t generally going to be a lightning rod, there will be board states where she is quite the threat, and you’ll want to make sure you can protect her. Mother of Runes, Lightning Greaves, and Swiftfoot Boots can all protect from pinpoint removal. Eldrazi Monument gives any deck with lots of creatures on the board a gigantic boost at the cost of sacrificing a creature during your upkeep, but Trostani herself can easily pay the cost each upkeep assuming you have a token creature to populate off.

Then there are ways you’ll want to boost your team, like Gavony Township and Collective Blessing. Windborn Muse provides protection to your own life totals, preventing other token-heavy or swarm decks from getting to attack you with much, though if you find your opponents are copying your Windborn Muse with clone effects and to stymie your own swarm, you may want to cut it for something else.

Mana acceleration and mana fixing are both very important, and we’ve got a fair number available to us in this color combination. Druidic Satchel does a nice job of occasionally accelerating our mana, while also sometimes making a 1/1 Saproling token we can use.

While you’re busy executing your own plans, you’ll want to make sure you’re able to respond to your opponents when you need to. Martial Law strikes me as being quite a potent tool since it can really leave someone vulnerable not just to you but to other players around the table.

You need to keep the cards flowing in Commander, so I’ve included a fair number of cards to help you do that. Soul of the Harvest doesn’t trigger off token creatures unfortunately, but there are plenty of actual creature cards in your deck to keep things moving and besidesâ€”it’s a 6/6 trampler which isn’t too shabby on its own! Seedborn Muse isn’t technically raw card advantage, but it gives you huge mana and activated ability advantages which can often translate into virtual or actual card advantage.

You’ll want Wayfaring Temple to have evasion for sure, but I’ve also included ways to give your team evasionâ€”Champion of Lambholt can get particularly scary for your opponents, and Garruk’s Overrun ultimate ability can just end games if you have enough creatures out there.

Here’s what I’d recommend building for someone just starting out in Commander with Return to Ravnica and shouldn’t be too difficult to pull together.

Forty lands ought to satisfy my fellow Commander deckbuilders who often worry I’m too stingy on lands here, huh? If you have access to older cards there are additional ways to better fix your mana, but this configuration works pretty well.

Are there any new cards you think belong in this list? How would you go about “powering up” a Trostani, Selesnya’s Voice Commander deck? Let us know in the comments below!

I write a blog that you may find it fun to read and comment on. I update at least once a week so check on it often and let me know what you think! 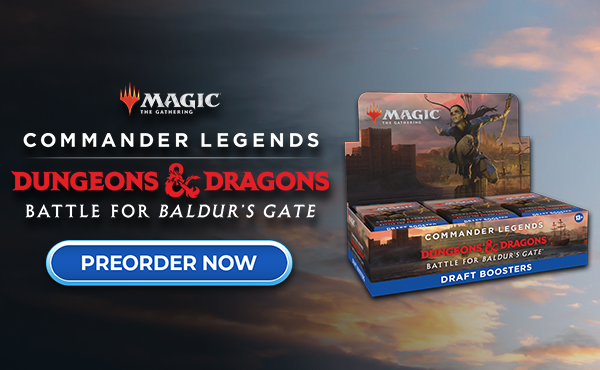