If you’ve been following me and my Commander compadres in the past month or so, we’ve got you covered with Commander ideas for all the new legends from Return to Ravnica…save one. Today, that Dragon-sized hole gets filled! If you’ve been considering giving Commander a try and you like the idea of having a red and blue Dracogenius lead the charge for you, I’ve got just the deck! 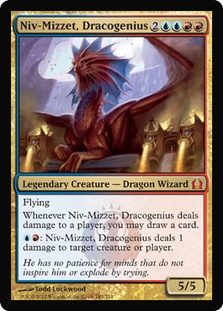 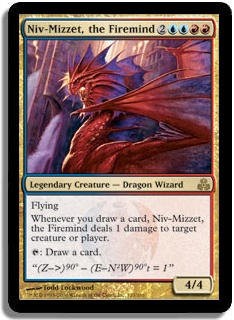 Of course, one of the first questions we have to ask ourselves is: why Dracogenius over the Firemind? Let’s compare and contrast:

In aggregate, the two cards are quite different in the style of play encouraged. Firemind wants you to sit back, draw cards, and eventually combo out. It very much pushes a "sit back and buy as much time as possible" style of play. Dracogenius is a little different. While he doesn’t mind if you sit back, ping some people, and draw some cards, you’re not going to win that way. That’s 40 red and 40 blue mana per opponent you’ve got to invest, not to mention dedicating enough recursion to keep the cards flowing.

No…Dracogenius wants you to get aggressive and smash face. He’ll draw you a card each time he connects…and still draw you cards with the pinging if you want to. When building a deck around Dracogenius, you’ll want to focus a lot more on ways to get him in your opponents’ faces and take large whacks at life totals.

The Firemind scares people, and rightfully so. When you declare him as your commander, you immediately paint a gigantic bull’s-eye on your forehead and have no one to blame when everyone gangs up to take you outâ€”or at least your commander. Dracogenius is a much more "fair" commander and will likely not draw the ire of everyone at the table nearly as much, which makes him a much better choice for people who are newer to the format…as well as those who just want to smash face with a sweet Dragon!

For my Trostani, Selesnya’s Voice Commander deck, I built it almost exclusively from the newest Magic sets available, with some cards from the Commander and latest Planechase products mixed in. For this build, I’m going to broaden it a bit to include Modern-legal cards. Some of these cards might be challenging to acquire…but if you feel an affinity for a Dracogenius, I’m assuming you’ve got the will and the way.

One thing that’s always helpful to check for when building a Commander deck is tribal synergies. Over the years, Wizards of the Coast has pushed fun and potent tribal synergies we can tap into depending on the Commander we’ve chosen.

Niv-Mizzet is a Dragon, and while Dragons as a tribe haven’t been pushed hard, they have been pushed from time to time. Restricting our card pool to Modern doesn’t give us too much to work with, but if you’re interested in digging into older sets you’ll find some good Dragon tribal stuff. However, we do have Crucible of Fire available in Modern, which gives a nice big boost to our Dracogenius, pushing him to a truly impressive size that can kill in three hits. Since we’re in red, there are some other good Dragons I’d recommend playing (Hunted Dragon, Thundermaw Dragon, Hoard-Smelter Dragon, Steel Hellkite, Hellkite Igniter), so I think Crucible has a home in our 99.

Wizards have some tribal synergies as well, but not too many are in our Modern card pool and are also good for Commander. Diviner’s Wand seems worth playingâ€”we can equip it to Dracogenius for free, and since we’ll be drawing cards with his ability he can also grow large for each activation, making him a pretty hefty threat. Inspired Sprite is an interesting card as wellâ€”being able to flash it into play gives you some flexibility, and once it’s active and tapping to draw cards, each Wizard you play comes with an extra card attached.

One thing that’s pretty obvious is that Dracogenius is happiest when you feed him lots and lots and lots of mana. I usually include a fair number of lands and mana artifacts in my Commander decks, but for this build I’m going to really push that hard.

Most of these are self-explanatory, but some notes on the non-obvious ones:

Springleaf Drum: Dracogenius’ ability has "haste," so long as you have enough mana the Drum lets you tap a creature to cover half of the activation cost. Plus, letting creature you’ve cast earlier tap for mana can help get Dracogenius to the party a turn earlier. Seems good.

Braid of Fire: When mana burn left the rules, this was certainly a card that jumped up as a card to consider in any deck with "Firebreathing" in any playgroup that’s not too Spike-ish and fast.

Soulbright Flamekin: I love this guy and wish he’d see more play. First, he’s a decent little beater, two power for two mana, and he can come down turn 2 and start pounding Mr. McCombo over there before he gets a chance to turtle up. Then, when he’s not big enough to play offense, he makes much bigger creatures slice through chump blockers like butter dripping off a hot biscuitâ€”not just your own but anyone’s creatures. Let me tell you, Lord of Extinction and Mortivore love gaining trample! To add icing to the curb-stomping plate, if you resolve the ability three times he gives you eight red mana back, essentially making the trample free while giving you a bonus two mana for your "trouble."

As I mentioned above, a Dracogenius deck is going to be aggressive and will want its commander to get up close and personal with the other players. Blue has a host of cards that can tap down blockers, make creatures unblockable, or bounce them out of the way, while red has a bunch of cards that can prevent creatures from blocking temporarily. You’ve even got artifacts that can do this sort of thing too.

I tried to mix a handful of cheap spells I can hold as "surprises," along with some equipment that can stick around and be used turn after turn. I really like Loxodon Warhammer in particularâ€”the trample ability goes perfectly with a more aggressive Dracogenius, while the lifelink can provide a steady boost to your life total while using his ability. Kusari-Gama is a nifty rattlesnake equipment that can really discourage opponents from chump blocking Dracogenius. If you have deeper pockets, the various Swords would certainly go nice here, especially in conjunction with Scuttlemutt, and Cryptic Command’s tap down the team ability fits perfectly.

Of course, the old adage that a strong defense makes a good offense applies in multiplayer Magic, and if your Commander is busy doing short work on your opponent’s life totals, you want to make sure you’re not getting pounded in return. The Modern card pool gives us some decent choices.

Slumbering Dragon, Circle of Flame, Izzet Staticaster, Silent Arbiter; Kazuul, Tyrant of the Cliffs: These cards are all great weapons against weenie hordes that might otherwise swarm in and make your life problematic. After all, you want to spend your mana for Dracogenius to ping opponents so you can draw cards, not waste time plinking away small critters!

Hunted Phantasm, Hunted Dragon: These undercosted large creatures make for a large bodies to discourage smaller attackers, while giving out small creatures that are easily handled by Dracogenius if need be, while letting you play politics by currying favor with another player.

Utvara Hellkite: Just a great card that rewards you for being aggressive with your Dragons while giving you a large blocker for your troubles.

So without further ado, here’s my Niv-Mizzet, Dracogenius deck for your consideration:

Some notes on a few other card choices not explained above…

Basilisk Collar: Another lifelink equipment that also lets you ping away creatures at your whim.

Void Stalker: "Tuck" effects on creatures are particularly potent in Commander since the power to reuse your commander card comes from always being able to reuse him if he dies or gets exiled. For that same reason tuck effects are also quite hated, so I’d recommend only using his ability to save your bacon from a large attacker or tucking away a particularly obnoxious Commander that will win you friends around the table. You can also use it to shuffle back in one of your own creatures you don’t want stranded in the graveyard.

Grand Architect: A Lord for Niv-Mizzet, and there are enough artifacts in this deck that his other ability ought to come in handy quite a bit too.

Fatestitcher: An innocuous card that nevertheless provides endless utility for just the cost of tapping.

Voidmage Husher: I am constantly finding good uses for this card… How about countering planeswalker-activated abilities?

Essence Backlash: I was brutalized by this card in my Prerelease event and immediately realized how potent it can be in Commander, where some creaturesâ€”and some commandersâ€”can be gigantic, and being able to stop the creature from resolving and blast a bunch of damage to your opponent’s face is the perfect Izzet card.

Rite of Replication, Bribery: These cards are here to get you a Seedborn Muse in play, because Dracogenius is insane if you’ve got all your mana available to you during each person’s turn.

Niv-Mizzet, the Firemind: Just because the Firemind isn’t your commander doesn’t mean you should leave him on the bench! The sweet thing is that you can have both in play since they have different names and won’t legend rule each other. Since I’ve put the Firemind in, I went ahead and included Curiosity just in case you do need to go off and combo kill people, along with Elixir of Immortality and Psychic Spiral if you need to reset your deck.

So what do you think? Any Modern cards you’d recommend for the deck? Hit me up in the comments below!