Last time, I showed you the composite Gifts maindeck. Today, I’m going to break down the mana base and unveil the composite Sideboard. The sideboard trends are the hardest to eyeball. In the process of tallying up these Gifts decks, I have had the opportunity to closely observe the trends. Because I chose such a broad time frame to select the composite list, it is harder to see the particular directions in which the Gifts lists are moving. Therefore, I’ll explain what I’ve observed.

But first, let me show you the full decklist with sideboard:

Before analyzing the sideboard, let me breakdown the mana base:

The Gifts mana base ranges from twenty-four to twenty-six cards, with most Gifts lists running twenty-five mana. This is usually split between fifteen lands and ten artifacts, although the number of lands has been trending upward to sixteen as Null Rod increases in popularity in Stax.

Every single Gifts list ran those twelve cards. That leaves about thirteen cards to round out the mana base. There are some distinct trends that I’ll point out. 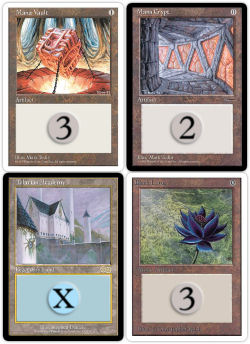 For those who want to know why Mana Vault and Lotus Petal find their way in there, I’ll explain. Mana Vault has a number of crucial roles. First and foremost, it is another sacrificial lamb to Tinker if your opponent has resolved Chalice of the Void set on one. Only Sol Ring can help you out, unless you run cards like Pithing Needle. Secondly, it is huge mana boost. If you only need a few more mana to win, Mana Vault may be a card that you Gift for. I have seen Gifts like: Mana Vault, Mana Crypt, Black Lotus, and Tolarian Academy. Without Mana Vault, such Gifts are not possible. Finally, it has great synergy with Tolarian Academy and is a generally amazing mana accelerant.

Lotus Petal was even more controversial than Mana Vault. The most compelling arguments for Petal center around the centrality of Yawgmoth’s Will. This argument has two distinct forms. First, Lotus Petal recurs nicely with Yawgmoth’s Will, helping to generate off-color mana like Red for Burning Wish and Black for Tendrils of Agony. Perhaps the most important argument for Lotus Petal is that without it, you can’t force your opponent to give you a Black artifact mana source the turn before you plan on playing Yawgmoth’s Will. This came up quite a bit when I was playing Meandeck Gifts. Say you have Yawgmoth’s Will in hand, or Yawgmoth’s Will and Recoup in your graveyard. Your opponent passes the turn. On their end step, you play Gifts Ungiven for mana to maximize your Yawgmoth’s Will. Imagine your Gifts starts out as: Black Lotus, Mox Jet, Tolarian Academy. If you do not have black mana on the table, you will be forced to waste your fourth Gifts card on an Underground Sea or Fetchland and worse, spend your Yawgmoth’s Will turn playing that land instead of the Academy. Lotus Petal is necessary for that reason.

For simplicity’s sake, I have combined all Snow-Covered and regular Islands since they have the same function for our purposes here. If you want to run Snow-Covered Islands so that you can Gifts for basic land, feel free to do so. Most Gifts players do.

As I explained earlier, every Gifts list runs at least one Island. Although you can’t tell from this data, the number of basic land per Gifts list has risen dramatically in the last year. Although only four Islands made the composite list, many players are now running five. I’d say the average is probably 4.5 or so Islands per recent Gifts list. Concurrently, there has been a steep drop in the number of dual lands as you will see in a moment.

The number of Fetchlands remains steady at about 4.5 per Gifts list. It’s often a matter of personal preference. I like the six fetchland configuration myself.

Thus, although you can’t tell, the modern Gifts mana base looks something like this:

However, the eagle-eyed among you may be wondering why I say that if Library of Alexandria makes our composite list:

Tundra has been almost an exclusive Probasco innovation to support Balance and Sacred Ground in the sideboard.

The Gifts sideboard has witnessed a tremendous amount of variability. As a consequence, the threshold for making the cut here is lower. After I analyze the composite list, I’ll comment on some of the trends that are hidden by the data.

As a reminder, here is our composite sideboard list:

Here is the specific breakdown of both cards: 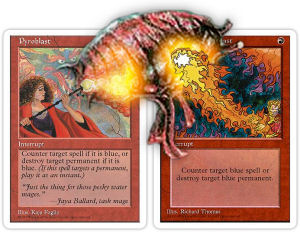 The reason is simple: Red Elemental Blast is an amazing card. For one mana it is the strongest anti-control card in the format. It is a huge tempo boost and extremely efficient. Frankly, I’m surprised that people aren’t running more. I’m also surprised that only twenty-eight out of forty-seven lists had two Rack and Ruin in their sideboard. I suppose the diversity reflects the view that a different anti-Stax card is better than a second Rack and Ruin.

Tendrils of Agony has only become a staple as Burning Wish and Darksteel Colossus have become dominant. Probasco and his teammates are the only real holdouts, keeping the Tendrils appearances relatively low. They prefer Flame Fusillade as the finisher Wish target.

Pyroclasm is so popular not just because it is a brutally efficient anti-Fish, anti-Welder card, but also because it is a Sorcery and hence a Burning Wish target. This helps explain why there is such a drop off between the first copy of this card and the second. Pithing Needle has seen a dramatic rise. Remember that Needle was not legal for the entire period I’ve canvassed. Showing up in over half of the sideboards demonstrates that it is a sideboard staple. As I’ve already said, it is an effective anti-Uba Stax card shutting down Welder, Wasteland, and Bazaar of Baghdad, among others. It is also quite strong against Control Slaver where it nails Goblin Welder and Tormod’s Crypt as well as Mindslaver itself. Hurkyl’s Recall is one of the strongest anti-Uba Stax cards next to Pithing Needle. Duress is a solid anti-control and anti-combo card that is also a Burning Wish target, in a pinch.

I’m not quite sure why Deep Analysis is so popular, but it isn’t a terrible Burning Wish target. It is a solid draw spell and can be fetched to turn a Red card Blue if you need something to pitch to Force of Will. Rushing River is simply another popular bounce spell for the sideboard. It’s quite solid against annoying Null Rod decks.

Tormod’s Crypt and Blue Elemental Blast dropped off quite a bit since the Spring. They never recovered. Coffin Purge is still quite popular, however, as an anti-Worldgorger Dragon/Animate Dead combo card.

Both of these cards appear with some frequency without a clear regional preference. Titan is clearly chosen as an alternate Tinker target for the Control mirror. Mind Twist is a solid Burning Wish target as well as a Control mirror bomb.

If you see Tundra, you’ll see this card.

Just two cards I thought I’d bring to your attention.

Notable Cards that are Increasing in Frequency

I won’t cite their frequency, but there are some cards that were once popular but have completely vanished: Old Man of the Sea; Chalice of the Void; Boseiju, Who Shelters All; Lava Dart; and Cranial Extraction. In their place, we see a rise in cards like Darkblast, Annul, Engineered Explosives, Balance, and Engineered Plague.

Annul is one of the most interesting trends. Somewhere in August, Andy Probasco and his teammates started running three Annuls in their sideboards. You’ll notice that they are still running them today.

I’m certain that this card will be in the composite sideboard this time next year.

This card is actually great tech. It nails welders, Fishies, and most importantly, Dark Confidant.

I expect this card to linger a while. The Northeast is pushing new sideboard cards like Annul and Engineered Plague. It remains to be seen what other cards will become staples in Gifts sideboards. It seems like White is once again vanishing as quickly as it emerged.

The decks that Gifts will be fighting appears to be Stax, Control Slaver, Gifts mirrors, and Fish. Therefore, I expect Red Elemental Blasts, Rack and Ruin, Hurkyl’s Recall, and Pithing Needle to remain at the core of any Gifts sideboard for the foreseeable future. Darkblast may well join the ranks of those cards.