The first tournament of a new format is one of my favorite tournament settings, as its well within my comfort zone. No one knows what’s going to happen;
it’s basically the Wild West out there, which is exactly where I want to be.

When I first saw the Mardu cards, I knew for sure I was locking into the clan. Everything about it just resonated with me, and I wanted to make the best
version of a Mardu deck I could. The real drawing point for me was Butcher of the Horde: 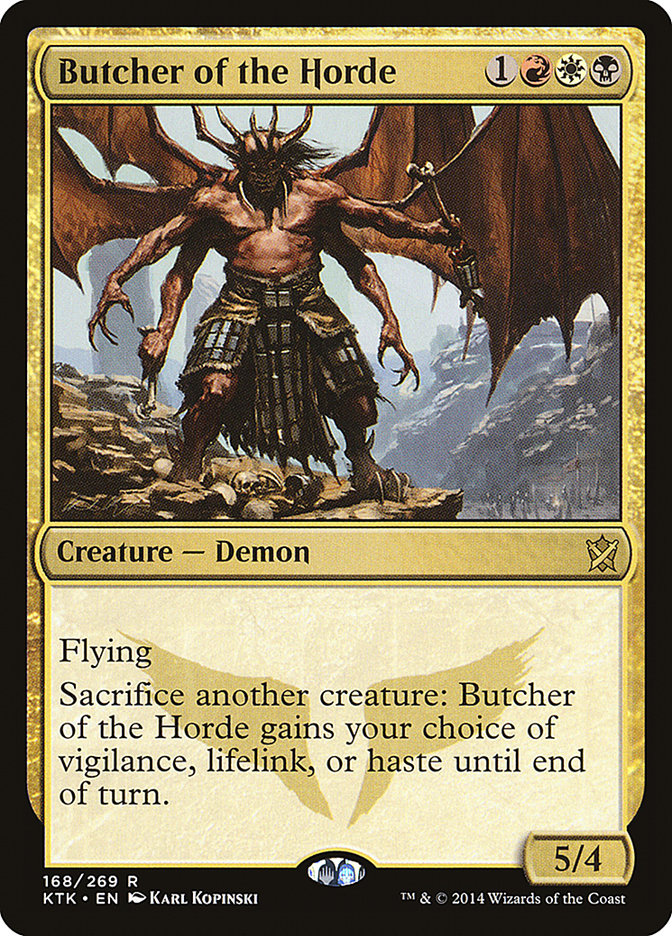 Have you seen this card?

For the love of Mogis, is it holding a freaking arm?!

This card is a Mortal Kombat fatality. It’s the Pyramid Head of Standard. It enters the battlefield with Kane’s music playing, and it’s going to chokeslam
anything that stands in its way.

I immediately started building around it, and I’ve tried nearly everything. From aggressive token strategies, to heavy control shells. Nothing was really
working, and I didn’t really have any direction in the process.

The issue was that I needed a way to be as good, if not better than the Courser of Kruphix/Sylvan Caryatid decks. While Butcher is very powerful, there had
to be other things going on as well. Mardu Charm was also an incredibly good utility card, but I wanted to be attacking, and jamming individually powerful
threats down people’s throats, not playing dinky 1/1’s or Duressing. Well, it turns out that those dinky 1/1’s were actually incredibly powerful with
Butcher of the Horde, and defensively, they did a great job against the black and red hyper-aggressive decks, getting at least two turns worth of blockers
(first strike on the first turn). Duressing on the draw step was also very good when trying to press an advantage, and snatching a planeswalker was the
marquee play of the card.

I also wanted to go about this tournament differently. I wasn’t trying to have the best deck in the room as much as I was trying to build the best Lowry
deck. I knew that I was going to play with Chandra in some capacity (duh), but the question was where. Butcher of the Horde and Chandra get along fine, but
the card that was really overperforming was Crackling Doom. In fact, Crackling Doom is so good that I wound up not wanting Hero’s Downfall, a card that has
been in every black midrange deck, at all anymore. This created a cascading effect with the deckbuilding process. Cutting Downfall promoted being more
aggressive, which put me on Stormbreath Dragon, this demanded a rework of the manabase, which put me as a base R/W deck with black being the lighter
splash, instead of being this Thoughtseize based grindy deck. I had to hit all of my colors by turn 3 though, and 25 lands simply wasn’t enough to ensure
that. Adding the 26th land in an aggressive deck seems strange for sure, but as I talked about a couple of weeks ago, when you have a lot of assorted
Temples, you definitely want more lands. Stormbreath Dragon happens to work well when you have excess lands, so it made even more sense to shoe it in as a
four-of. The Mardu color combination doesn’t really have many mana sinks at five mana and under, and the available card draw in the format wasn’t
spectacular for us either. Sign in Blood being double black is a huge turn off, and I don’t really want to Read the Bones, since it’ll be yet another
three-drop to add to my fifteen. That left Tormenting Voice. While way better than Wild Guess, it doesn’t actually help get you more cards since
you’re not going up on anything. It’s good later on in the game when you have bad cards, but I want to be drawing cards early and throwing threats down
later, so Tormenting Voice does not make the cut.

So what do I do now that I don’t really have draw effects? Scry more, of course! Having a lot of tapped lands sucks, but hitting your colors and drawing
gas is worth the loss of tempo. I would go up to eight Temples and three Nomad Outposts, putting me at ten tapped lands, one over my self-imposed limit. I
wasn’t too happy about it, but my colors were too demanding to be picky, so I bit the bullet. Raising my threat density was the next thing I did, adding
more top end, more specifically, this: 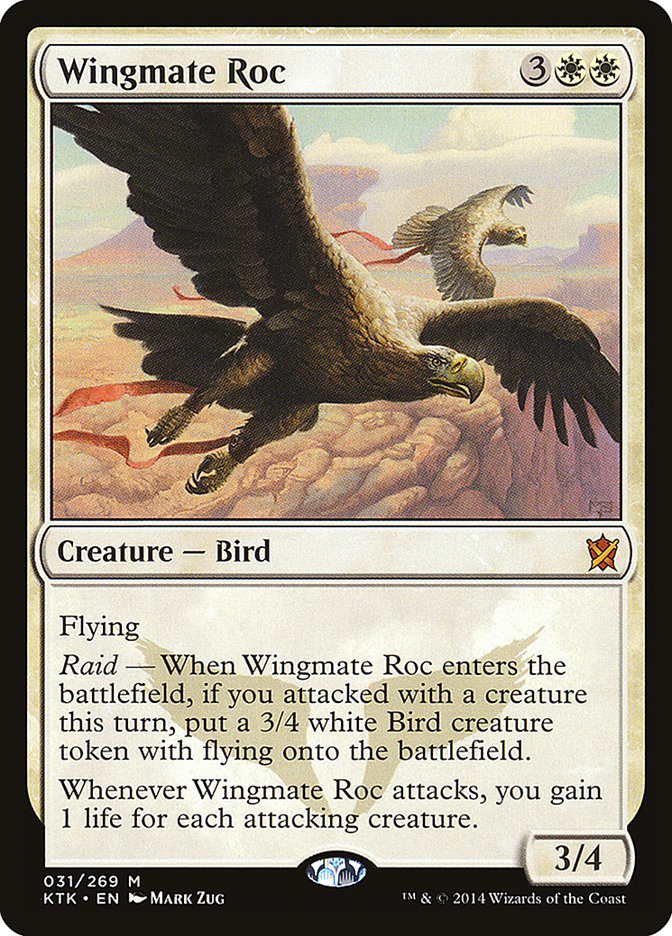 Also known as “Roc the Party”, “Roc and Roll”, or my favorite:

Wingmate Roc isn’t the most aggressive five drop out there, but the rate you get is through the roof. It works great with Sorin and Chandra, and threatens
the major planeswalkers in a huge way. Most planeswalkers require a decent chunk of their loyalty to remove creatures, and Wingmate Roc punishes all of
them for it. It cleanly kills Elspeth, Sarkhan, Sorin, Chandra, Nissa, and Xenagos, and undoes the offensive advantage those planeswalkers put out as well.

What you may notice right off the bat is the lack of Hero’s Downfall. To put it simply, the card sucks. It’s seriously not good when you’re trying to
attack every turn, and Crackling Doom will usually hit the creature you want to hit anyway. Getting rid of the double black spell is also a big relief on
your mana, and allows us to even up our color count to better cast Brimaz and Butcher. Arc Lightning replaces Hero’s Downfall, giving us some real game
against the aggressive decks, against Courser of Kruphix when you’re on Goblin Rabblemaster, and to manage planeswalkers.

The problems of the deck were made very apparent early on in the tournament. While using your turn 2 to scry was very strong, especially after a turn 1
Thoughtseize or Despise, not having either a discard spell or a Temple was disastrous, especially on the draw. I played against Jadine Klomparens in round
one and immediately realized how badly I was going to get destroyed when I didn’t follow up with a turn 2 play against her Jeskai deck, and she proceeded
to best me down with a Mantis Rider, while my Brimaz stared helplessly from the ground.

Another issue was Mardu Charm.

It was the most underwhelming card I’ve played all year.

Four damage to a creature is good, but I’d honestly would rather just play Stoke the Flames in that spot if I want a four damage spell. It’s easier to
cast, works well with both Rabblemaster and Brimaz, and can give some much needed reach. Two 1/1 first strikers against aggressive decks were fine when I
wasn’t fighting with my manabase or taking two from pain lands in the process, or if I didn’t get blown up by Searing Blood. The Duress mode was by far the
worst effect because Dig Through Time was outclassing it every step of the way, or it wound up hitting only Elspeths, which was whatever most of the time.

Playing 26 lands was great whenever I had Stormbreath Dragon, and cringeworthy if I didn’t. I need more things to do with my mana, like a Rakdos’s Return
effect. Crater’s Claws might be worth it, but Sorin has to put in some extra work with Brimaz if I’m going to maximize it. Ashcloud Phoenix seems awesome,
and is pretty good at attacking and blocking, so it might be the next best thing on a dead board. More fliers certainly won’t hurt.

Lastly, Wingmate Roc. While it was a super powerful card, and it definitely came to party, I would’ve been much happier if they were Sarkhans or something
else that attacked quickly and efficiently. Sarkhan being a removal spell is a huge plus as well, especially if I’m moving away from Mardu Charm. I think
being more of a hard hitting creature midrange deck is where I want to be going forward while also finding a decent mixture of removal that doesn’t destroy
my manabase.

Maybe going more toward burn spells is a solid direction, with Lightning Strike and Stoke the Flames. Maybe putting all focus on pushing damage through
with my creatures is a good direction. As for the sideboard, the four Anger of the Gods and three End Hostilities was pretty overkill, and I think if be
okay with just playing Circle of Flame alongside Angers, as long as the hyper aggressive decks aren’t playing more Hall of Triumph. Despise was alright,
but it never felt necessary, and would be fine playing something else. Empty the Pits and Soul of Shandalar were both fantastic, but I want to shave a spot
from that category of spells. Soul of Shandalar is much better against the bigger midrange decks, but Empty the Pits can kill out of nowhere. Dark Betrayal
was laughably bad, even against Butcher decks, and would rather just have Murderous Cut.

Nonetheless, it’s certainly been a big challenge trying to find a balance. The deck is definitely the real deal, and I’m excited to be working on improving
it even further as the format begins to develop. Everyone I’ve talked to were genuinely excited playing Standard, and they all enjoyed their decks as well.
If the top 32 is any indication, then we’re going to be in for one heck of a Standard season!