Theros block has a lot of new stuff going on, but the coolest, most flavorful, and most powerful cycle of designs is the Gods. Initially, many players (including myself) had a hard time wrapping their heads around the power of these enchantments/sometimes creatures since the consistency of devotion is a tough thing to quantify in the abstract. After Pro Tour Theros, the power of these cards became undeniable.

Thassa, God of the Sea is the best spell in one of the Standard’s best deck; Purphoros, God of the Forge and Erebos, God of the Dead are solid players, and even Nylea, God of the Hunt and Heliod, God of the Sun hang around the fringes of the format. They are powerful for different reasons—Erebos is pretty close to a card advantage enchantment in Mono-Black Devotion, while Mono-Blue Devotion is very good at turning Thassa into a creature—but they’re all quite good. I expect all of them to get their day in the sun by the time Theros rotates out of Standard.

Born of the Gods introduced the ally-colored gold Gods, like Ephara, God of the Polis and Xenagos, God of Revels. The opportunity cost of these cards is much higher than the single-colored gods of course, but players are still going out of their way to include them in decks. Mogis, God of Slaughter is a little redundant next to Purphoros, and Karametra, God of Harvests and Phenax, God of Deception are curious build-around cards. But the straightforward value of Ephara and Xenagos have found homes in a variety of strategies and should be Standard staples for the duration of their legality.

These two cycles set the stage for the enemy-colored Gods, including the one I have the privilege of previewing today. Keranos, God of Storms is a very exciting card with what I believe may be the best static text box of any of the Gods (and that’s really saying something). 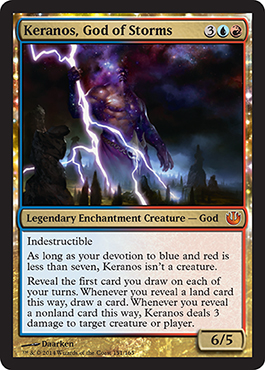 Keranos may be the worst creature of the Gods when devotion is enabled (once you factor in mana cost), but the compensation is an outrageous text box that would be a powerful enchantment in many formats even if it could be destroyed, which Keranos can’t. In many ways the first part is a blessing in disguise—you don’t need to contort your deck to enable devotion because Keranos doesn’t need to become a creature to provide you adequate returns on your investment. If you do, that’s great, but it isn’t a requirement for Keranos to be powerful.

In contrast to text boxes like Thassa (that demands that you play with creatures) or Erebos (which begs you to play a slow grindy game), Keranos can enable a variety of strategies. Looking for a finisher in your control deck? Keranos provides you a steady stream of board control and card draw. How about a threat to top off the curve of your burn deck? Keranos can find you additional burn spells or simply kill your opponent, and its presence allows you to spend your early burn spells containing the board, knowing that you have a ton of inevitability once Keranos shows up.

Keranos can also allow for a hybridization of these two decks, which is where I believe it has the most long-term potential. Consider this U/W/R skeleton, which draws a lot of inspiration from the Gerry Thompson style tempo decks of Innistrad Standard.

The goal here is to maximize both potential triggers from Keranos by incorporating it in a deck that can play a control or beatdown game as appropriate. Izzet is a guild with a bunch of powerful cards that see very little play (Ral Zarek, Turn // Burn, Izzet Charm) in part because the guild has no powerful way to close out the game and in part because the guild has lacked a Temple. Journey into Nyx solves both problems with Keranos and the appropriate Temple.

With Boros Reckoner, Ral Zarek, and Frostburn Weird, hitting five additional devotion isn’t out of the question, but it’s by no means necessary to make Keranos a potent weapon. Keranos also synergizes nicely with the Temples, allowing you some amount of control on drawing a land or spell as appropriate. Decks like this historically struggle with Sphinx’s Revelation decks, and the mana base is probably far from perfect. But a deck along these lines has all the tools to have positive matchups against aggressive and midrange strategies.

The Gods all present different deckbuilding challenges, and Keranos is no different. But in contrast to every other God we’ve seen, Keranos is sufficient in static power alone to be worthy of Standard consideration, be it in control, burn, or something in between. With Izzet on the outside looking in since Theros hit the scene, Keranos and the U/R Temple alongside the base of powerful preexisting Izzet cards has the potential to dramatically influence Standard for months to come.