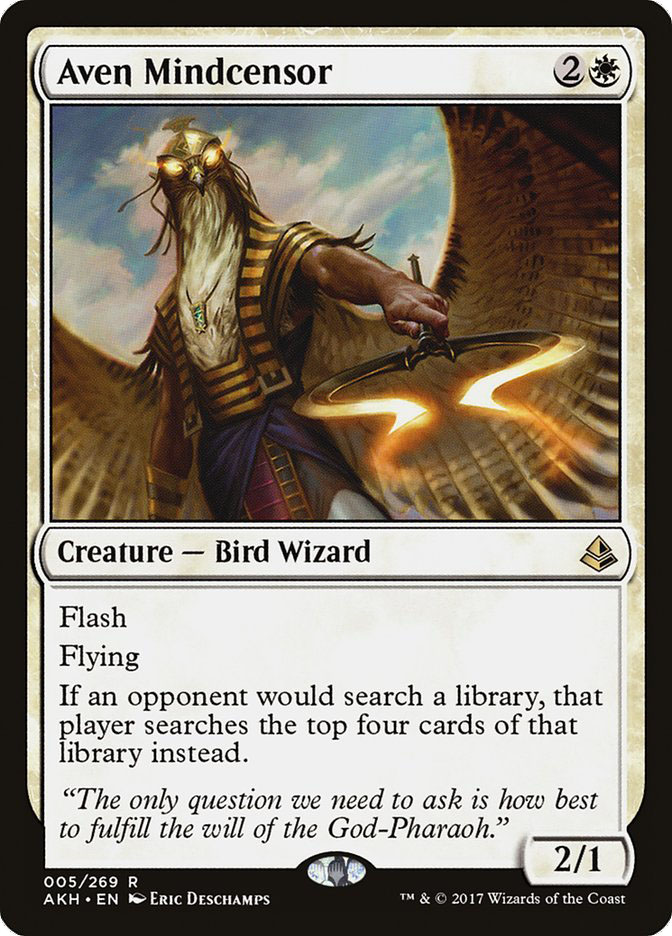 Reprints are always interesting for me, because for the most part I can remember about how much play the card saw in its previous format. This is sometimes a benefit and sometimes a curse. Often reprints are looked at with some nostalgia, especially those that have turned up in older formats, and I can cut through that. However, sometimes a card just needs a different environment in order to shine, so if I rely too heavily on my previous experience, I can sometimes be led astray.

All of those factors are in play for Aven Mindcensor. It didn’t see much play in its first Standard run, generally shutting down Chord of Calling while ironically being featured as a Chord of Calling target. In older formats where fetchlands are prevalent, as well as things like Scapeshift, the aforementioned Chord of Calling, and various other tutors, it has proven more effective.

You’re not playing this card for its stats, especially given how poorly they line up for crewing vehicles, dying to Walking Ballista, and getting into combat against Heart of Kiran and Thopter tokens, so the question to ask is obvious. How relevant is its ability in the current Standard format?

There’s Attune with Aether and Traverse the Ulvenwald at the top of the list, followed by a bunch of much less impactful hits: Evolving Wilds; Nahiri, the Harbinger and Saheeli Rai ultimates; Sanctum of Ugin; and Eldritch Evolution, none of which strike me as particularly relevant to shut down.

Tagging the first two is nice, but also unreliable, given that they are typically cast on the opening turns of the game. If more search effects show up in Amonkhet, my feelings may change, but for now I’m steering clear of this one in Standard. 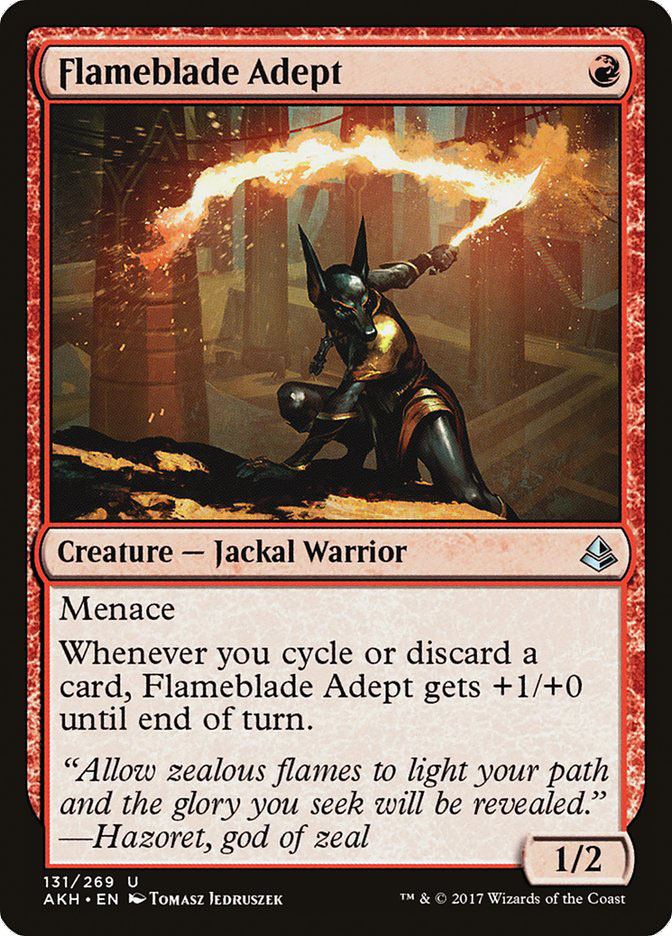 The stats on this card are reminiscent of Monastery Swiftspear, and while I don’t think this card is on that level, it seems pretty easy to turn this card into a 2/2 with menace for one mana, which is a solid one-drop for an aggressive deck.

Obviously this card would’ve loved to sit next to Smuggler’s Copter, but then again, what creature wouldn’t? Maybe missing its best enabler will push this card to the fringe, but there are other good discard outlets to pair it with. Insolent Neonate is another fine one-drop, and Key to the City both pumps it and makes its evasion more relevant by forcing your other creatures through.

The question for me is just how aggressive a Flameblade Adept deck wants to be. If I’m trying to be as fast as possible, then cycling isn’t appealing because it’s a significant tempo sink, but in a bigger aggressive deck, it becomes more plausible. That kind of deck is going to get advantage from its discarding with things like Fiery Temper and Scrapheap Scrounger and use Flameblade Adept as a way to apply early pressure and distract the opponent from its more important threats.

If you want to go more aggressive, then you need to be able to discard multiple cards at the same time so you can have more explosive draws, especially with multiple Adepts on the battlefield. Haunted Dead in the B/R Zombies deck could do that, but that deck isn’t in the market for a cheap creature. The card I’m looking at is Collective Defiance. Casting it on turn 4 to clear away a blocker and cycle two to four cards can produce a lot of damage in a hurry.

Aggressive decks tend to get better when the format is bigger because they have the critical mass of powerful cards on curve to achieve consistently strong openings, and I definitely see Flameblade Adept as being part of that critical mass.

Remember Thundermaw Hellkite and Stormbreath Dragon? They were great. This latest Dragon combines those stats with a built-in Flametongue Kavu. Flametongue Kavu was also great. Great + great = great. Trust me; I did the math. 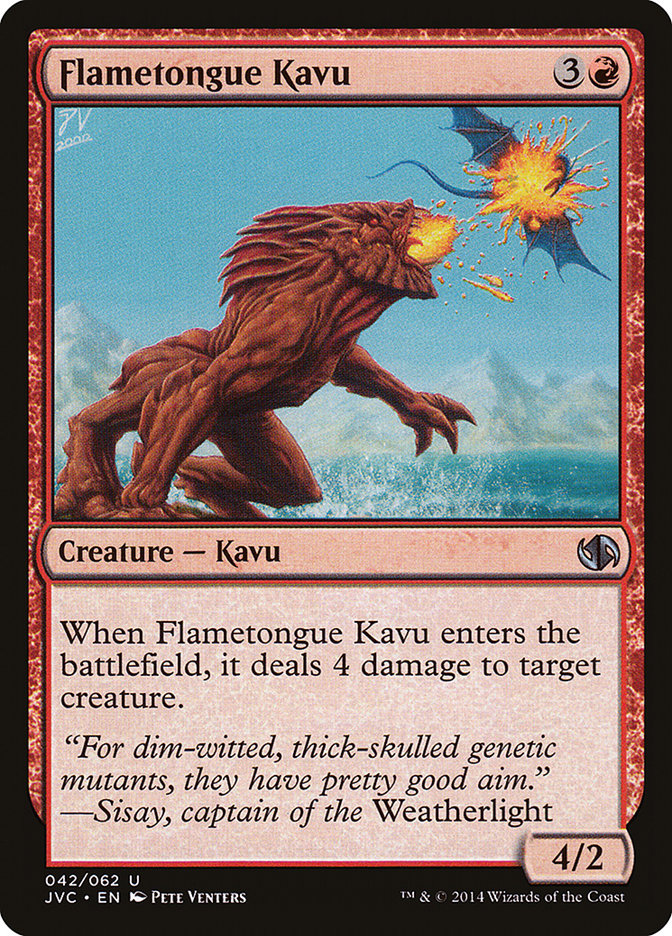 Spoiler: This card was great.

The stats on this one are so powerful that I’m less looking for where it fits in the format and more thinking where the format fits around it. Creatures that interact poorly with it are going to get a lot worse and the dominance of Gideon, Ally of Zendikar may take a hit (thankfully). We’ve grown accustomed to the prevalence of instant-speed removal due to Vehicles and Felidar Guardian, and this only furthers that pressure, since killing it before it can attack and trigger is going to be quite important. Look for any removal spells in Amonkhet

For a more detailed breakdown on how this card plays in the current Standard format, look at Ari Lax’s article from Monday. I certainly agree with his point about accelerating it onto the battlefield with Servant of the Conduit to match up on curve against the various planeswalkers in the format, although I can also see it at the top-end of the curve for many other aggressive and midrange-aggressive decks (say, with Flameblade Adept at the start of the curve). 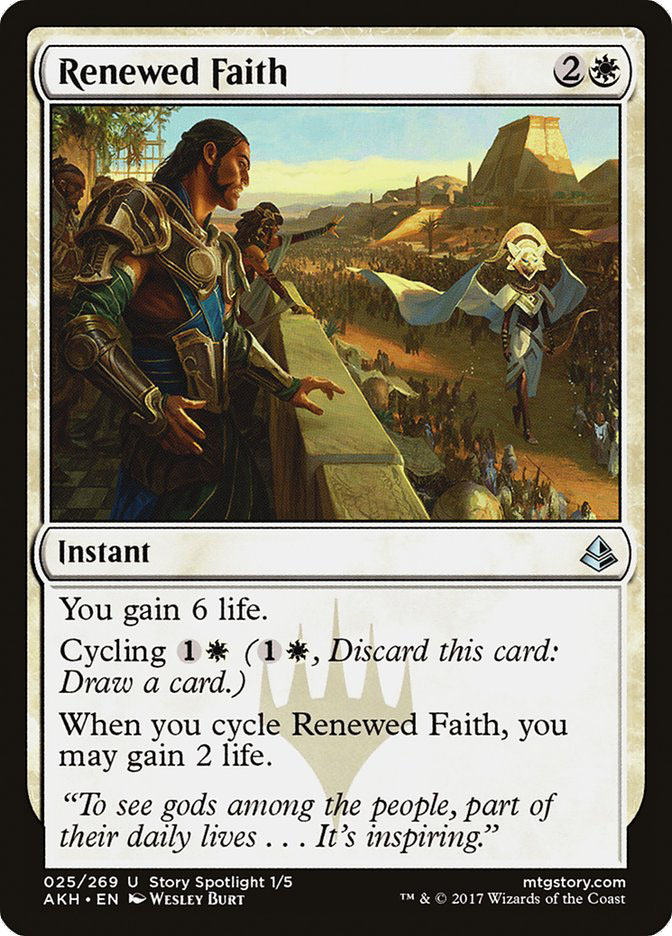 This is another interesting reprint because it comes from a time when creatures were not nearly as powerful as they are today. Exalted Angel and Ravenous Baloth were top-tier back then, so the lifegain from Renewed Faith represented a larger roadblock than it does today. On the other hand, lifegain is more important these days because most decks are trying to apply significant pressure, and getting that lifegain incidentally through cycling is great for more reactive decks.

Where Renewed Faith struggles is against the midrange, which unfortunately for it is where Standard sits right now. Even Mardu Vehicles, which started as an aggro deck, has slowly grown into a midrange deck.

The playability of Renewed Faith is thus going to depend largely on what remains in Amonkhet. If there are tools to build a control deck or an engine deck centered around cycling a la the old Astral Slide decks, then this card certainly has a place. But for now I’ll withhold judgment and say this is a card to keep an eye on…and maybe get some Onslaught copies so you can be stylish. 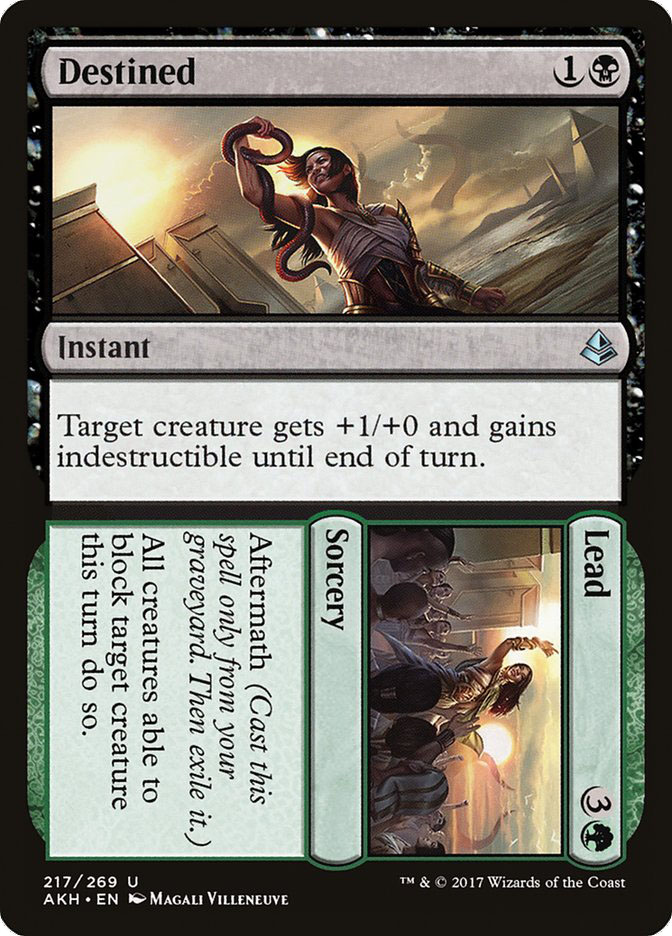 Okay, this one is more about the mechanic Aftermath than the card itself, which is little more than a solid combat trick for Limited purposes.

Yes, the layout of the card is unsightly, but I’ve never been that concerned with the aesthetics of the cards (except basic lands; if you play mismatched or white-bordered lands in Constructed, you should be disqualified).

The most immediate comparison was Flashback and for good reason. You’re essentially getting a Flashback spell; it’s just different from the first one. But that creates the potential for cards like Destined//Lead, which is part Flashback and part fuse because the two halves have such obvious synergy with each other. Now you have what is essentially three cards in one. You can cast both halves separately if you’d like or cast them one after another and get something that is greater than the sum of its parts.

Where this goes, I don’t know, but it’s an aspect of the mechanic I had failed to consider and I would wager I’m not alone in that regard. And what I do know is that having more options for little to no cost is the easiest way to make a card better, so I’m expecting some of these Aftermath cards to be priced for Constructed. 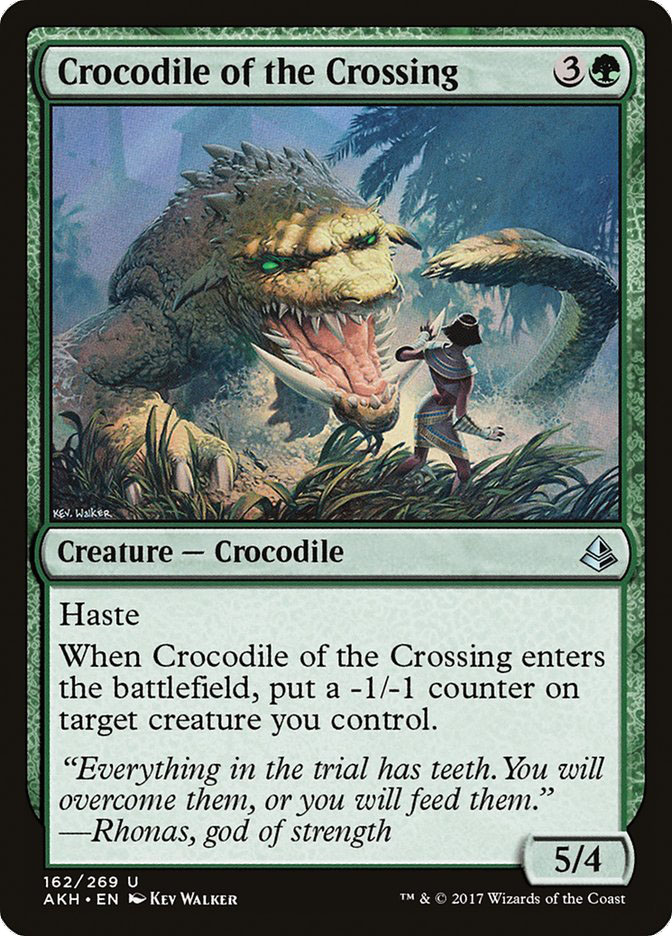 Crocodile of the Crossing – Intriguing

This is the kind of card that tingles my spidey-sense in multiple ways. First off, I’m a sucker for a big green creature, and four mana for five power with haste is a fine rate, especially when it can actually enter combat, unlike some Gods I know. But I have been known to overrate creatures with above-average stats that don’t do much else, and this certainly falls into that realm. Without any evasion, it’s rather poor at pressuring most planeswalkers, and against most removal it doesn’t compare favorably with Fleetwheel Cruiser, which has underperformed my expectations for it.

But there’s something so alluring about the downside here. One, you can put the counter on a mana creature like Servant of the Conduit that isn’t going to fight much anyway, and the four-drop curves nicely with acceleration. Curving Servant of the Conduit into Crocodile of the Crossing into Glorybringer sounds pretty good to me.

That’s all well and good, but I’m more intrigued by the fact that there is a clear -1/-1 counter theme in this block. Nest of Scarabs isn’t powerful enough to excite me, but I’m betting that something down the line will be. And if you can turn this into a creature with fine stats that also has an upside, then you have something.

If no such synergy materializes, then this card is likely relegated to 40-card decks where it won’t run in to Glorybringer as often…or ever die to Grasp of Darkness and Harnessed Lightning.

All in all, not the most exciting day for preview cards, which is somewhat surprising. Historically, preview season has been front-loaded with powerful cards, while the back-end is mainly Limited staples and a few undersung heroes like Thraben Inspector. Amonkhet appears to be different, with the season more evenly divided, so while these early days may be sparse with the cycling duals and Glorybringer as the only sure things, well, that just means there is more left for the next few weeks.

As they say in today’s youthful vernacular: get hype. 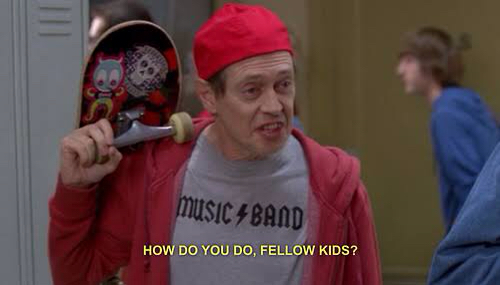