The more I look into Modern Masters 2017, the more excited I get! It looks like it’s going to be fun to play and complicated. We can only hope it’s balanced, and that’s going to be difficult to discern before we actually get to play with the cards. Today I am going to look at four more cards, all of which are green. From what I can tell, green seems pretty good at making tokens and provides a little additional help when it comes to ramp and/or fixing. Let’s keep this in mind when evaluating these cards. 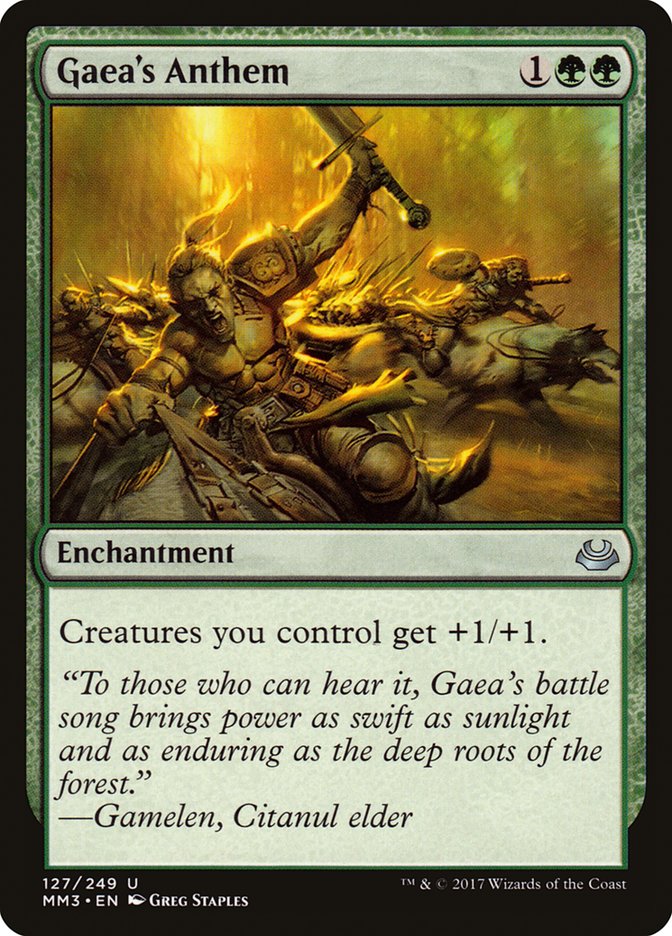 Gaea’s Anthem is only one color and distributes the wealth much better than a card like Oath of Ajani, but it doesn’t come with additional effects like the first-pickable Anthems do. But we still have to analyze the card in the current set.

With plenty of token-producers at common and uncommon, Gaea’s Anthem is probably going to go a bit longer than your average Anthem. Going wide is certainly a viable strategy, and an effect that makes your creatures all above-curve will set you far ahead on the creature versus creature battle. I have an inkling that this card is going to be surprisingly good, and even first-pickable! I would look to grab it around Pick 3.

Also don’t forget that there are common Disenchant effects, so look out for suspicious attacks when you have Gaea’s Anthem. 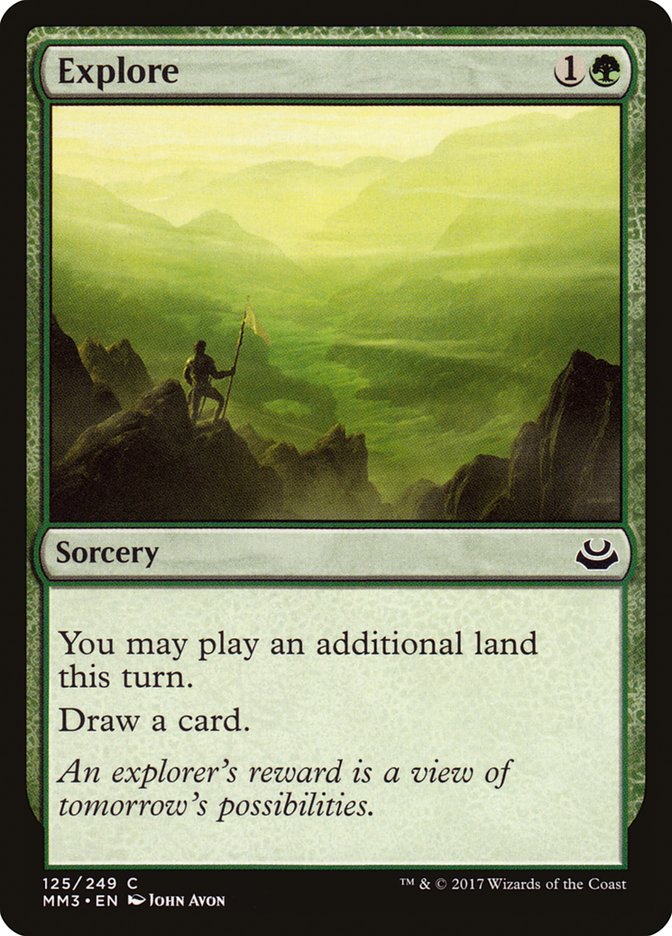 I am a huge fan of this card. Don’t misinterpret that; I’m not taking Explore unless I’m already green (so probably in the middle of the pack), but I am going to have to consciously force myself not to take it Pack 1, Pick 1. But I’m pretty sure a lot of people are going to dismiss this card as entirely mediocre.

Efficiency must be prioritized in Masters-set Limited. Avacyn’s Pilgrim and the Signets are cards we all know are very good. They are even better in this environment because they help you play above curve and hence more efficiently. Explore does this a little less reliably, yet often more resiliently. The feeling of casting a turn 2 Explore into some one-mana play (or, more realistically, casting it along with a two-drop on turn 3) is just wonderful.

So don’t dismiss this card as it doesn’t affect the battlefield. I’d be happy to put a copy or two (or seven because I like the card way too much…hey, at least I’m aware of it) in any green deck. 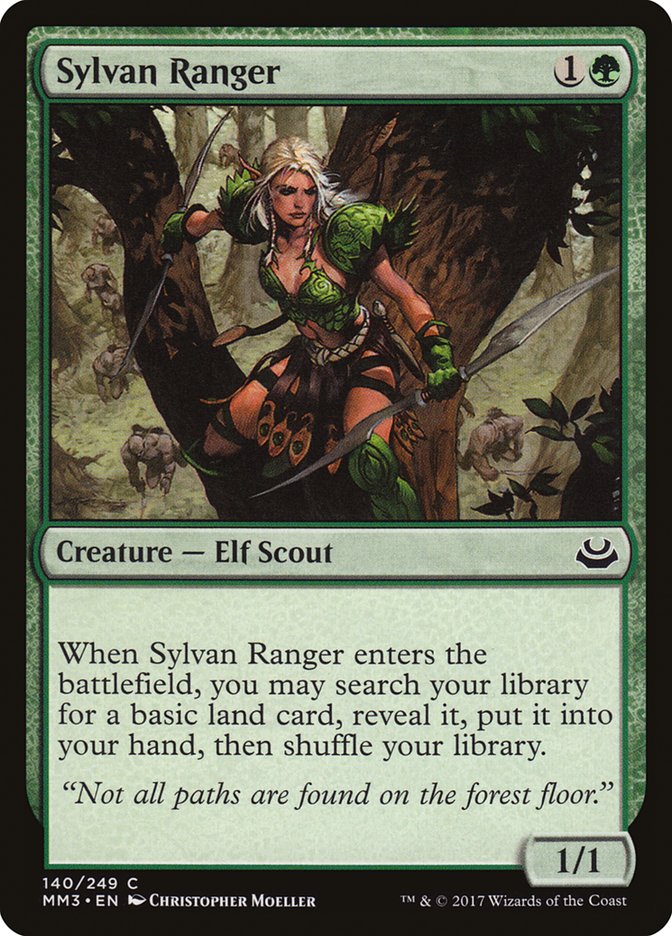 As much as I wanted this card to be Satyr Wayfinder, beggars can’t be choosers and I’m very happy with Sylvan Ranger’s inclusion in the set. The existence of this card at common means that Five-Color Green is certainly going to be an archetype. People will be fighting over Signets and two-color lands, but only so many people will be base-green, and that means picking up multiple copies of Sylvan Ranger isn’t going to be so difficult.

The Ranger is not particularly a card I want to zone in on early. In fact, the cards in this set are powerful enough that it even might wheel. But the earlier you take them, the greedier you can be later on. Maybe you have a nice Bant Blink deck a-brewing with a couple of copies of Momentary Blink. Now, Sylvan Ranger is a fine card there, but nothing to fawn over. Well, wouldn’t it be nice to include Broodmate Dragon in that deck? I know I would like to.

Taking fixing is going to be a crucial part to this format. I expect the majority of each pod to be in three or more colors. So Sylvan Ranger is an important piece in the puzzle that is the fixing in the set. It lets the green drafters be a little greedier with splashes. 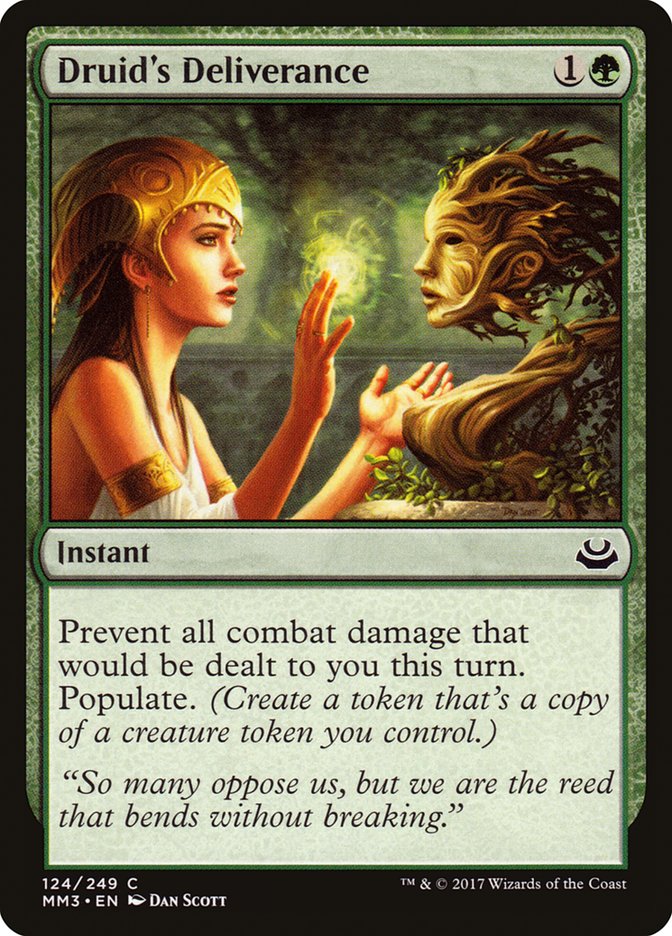 Every set nowadays seems to have some Fog variant. This card is pretty tricky to evaluate, as it has an incredibly high ceiling and an incredibly low floor. A two-mana Fog (well, you can eat a creature in combat, so maybe it’s a little better than that) is a card that should only ever be in your sideboard. But a two-mana flash creature (sometimes a 3/3 or 4/4 flier) with a Fog attached to boot is pretty insane. If you remember Druid’s Deliverance from the last time we saw it, the card was playable and certainly fun, but not a card you slammed unless you went really deep on populate.

Before playing with the set, it’s just going to be nearly impossible to give this card a proper evaluation. How good is a Populate or Tokens deck? Do games end up being close races a lot? Are decks trying to one-shot you from twenty to zero? These kinds of questions are hard to answer without getting your hands on the cards.

What I can say is this: if you start your draft with a Baloth Cage Trap, keep your eyes out for Druid’s Deliverance. I would expect the card to wheel until the format has been dissected to the extent that we know where it lies. I would look to have eight token-making effects before putting this in my maindeck. And, most importantly, know the card exists. It’s an important one to predict and play around.

That’s all we have time for today! If there are any other cards in the set that you would like me to analyze next week, please mention them in the comments.