Since I’m qualified for Nationals and the Midwest Masters Series at Gen Con, I get to play a lot of Standard next weekend and I’ve been testing with Kyle Stoll, Matthias Hunt, and Jason Schousboe. It’s hard to nail down what you should be playing when the field is so wide open. Two weeks ago, I tried to be cute and played RUG Twin at the PTQ in Fargo because it had that toolbox feel.

It didn’t go well. I was tired and hadn’t practiced enough with the deck to be proficient playing on autopilot. Moral of the story is, if you know you’re going to be tired, don’t play a complicated deck. On the bright side, all the Minnesotans did rock the Long John Silver hats. 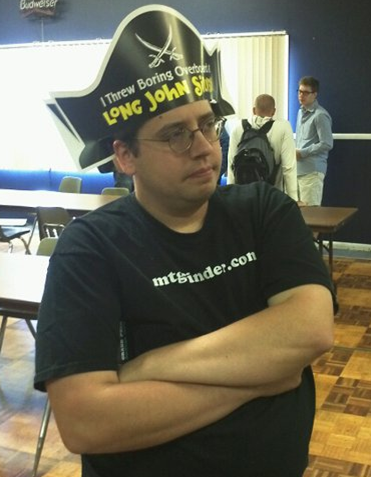 Hey, would you smile if you drove four hours and finished 1-2? But congratulations to Brandon Downs for winning with Valakut; you can find his report here.

For the Minneapolis PTQ, I switched to straight U/R Twin as it’s been showing up a lot lately and it’s just more consistent at assembling the combo than RUG twin. I played the list below, which I modeled after Jeffrey Meyerson’s list from the San Antonio PTQ, although I changed the sideboard.

2 Spellskite: A lot of the hate you face in the first game is Dismember or Into the Roil. You could run the fourth Dispel, but with only twenty-three lands it’s sometimes tough to have the mana to fight a multiple counter war. Spellskite allows you to spread out your mana over multiple turns and can block against aggro decks.

3 Dispel: Counters all the threats that disrupt you, other than Spellskite. Three is a good number because you always want one when you’re trying to combo, but you don’t want to get flooded with too many in game 1.

4 Gitaxian Probe: These draw cards and help you so much in figuring out what you need to go off. The other good thing is that in some matchups they are free, such as in the mirror or against poison decks.

4 Into the Roil: The count should probably be three; I was thinking I would use one early to draw a card, but because I played a lot against the more controlling Caw-Blade lists they cluttered up my hand.

2 Jace Beleren: Jaces are pretty good against Caw-Blade, but not much better than See Beyond. Personally I don’t like See Beyondâ€” the shuffle doesn’t help you since you just drew the cards you didn’t like from Halimar Depths or Ponder.

3 Mana Leak: You could run four, but you don’t have enough time or mana to fight with Mana Leak. This deck is one where I miss Counterspell the most, because Deprive just doesn’t work that well and Mana Leak is so blah later in the game.

3 Shrine of Piercing Vision: It’s your best friend early and the friend you hate to see later in the game. Multiples early are fine, but drawing multiples when you’re stuck on three lands is awful.

1 Dispel: It’s so good after sideboarding that you need it if you don’t have the fourth in the maindeck.

1 Deprive: I like a hard counter in the sideboard, and Stoic Rebuttal just doesn’t cut it. Have I mentioned that I really miss Counterspell? It’s not as broken as Mana Drain, so c’mon Wizardsâ€”reprint it for at least one set!

2 Flashfreeze: I don’t really like these against Valakut because a lot of them have Memoricide for their mirror and, of course, they play it against you too. But since I have no other counters for Primeval Titan, I’m playing two of these.

3 Mental Misstep: They’re good against Inquisition of Kozilek, Mono Red, and poison decks. Not sure if I need them against Caw-Blade, but more testing should tell me if it’s good there.

1 Mana Leak: Same argument as Deprive. This one should probably be main over the fourth Into the Roil.

2 Mutagenic Growth: This is only way to beat Combust, and it also beats Dismember.

2 Combust: It kills Hero of Bladehold and, of course, Deceiver Exarch.

3 Steel Sabotage: Tempered Steel is the real deal. Those Pyroclasms you expect to crush them with really aren’t going to get the job done. Slagstorms will get some work done, but you’re going to have a lot of pain before they do. Neither of those cards stop Spellskite, which stops you, but Steel Sabotage can disrupt them by countering an early threat and stops a Spellskite when you want to go off.

Here’s where most people throw in a sideboarding plan. I don’t like doing that, because sideboarding is a fluid action. It changes based upon what you think your opponent is running. I will go over some stories from the PTQ this weekend, one of which involves sideboarding against Caw-Blade.

In Round 5 I was playing against my friend Mark Hinsz. I really like Mark because he’s a year older than me, so I’m not the oldest member of the playing group!

He was playing Caw-Blade with Torpor Orb in the sideboard against Splinter Twin. Yeah, it’s weird, but you just play the Squadron Hawk first. He gets me in game 2 with Hawk beatdown and multiple Torpor Orbs and Spellskites, so I decided to side in my Steel Sabotage over the Into the Roils. That way I can counter the threat and still bounce it if I can’t.

I had three Islands and a Mountain with Shrine of Piercing Vision on three. He has four mana also, so he played a Preordain then cast the Torpor Orb I knew he had because of an earlier Probe. I triumphantly tapped an Island and countered it with Steel Sabotage. He gave me a strange look, put it in the graveyard, and at the end of the turn I played my Deceiver Exarch to tap his last land. On my turn, I sacrificed my Shrine for six to get the second Mountain and kill him.

Round 4, game 3, I was playing against Craig Spitzer with Tezzeretâ€”yet another matchup where Steel Sabotage is good.

So I was on the play and his turn 1 land was Drowned Catacomb. On his second turn, he untaps and casts Preordain. I have Mental Misstep in hand and am considering countering the Preordain. My logic was as follows:

Adding that all up, I countered itâ€”he played Tectonic Edge and passed. The other point, which I didn’t consciously think about, was that his first land didn’t come into play untapped, so he’s missing basic land. Maybe my subconscious was thinking that and that’s why it felt right to counter the Preordain.

He started missing land drops, but I drew a lot of land. When I started the counter war later over the Splinter Twin, his Mana Leaks didn’t do much.

So after losing round 1 to Troy Thompson and my misplay in game 1, I had managed to climb back, with a win in Round 7 likely to let me draw into the Top 8. Instead, I lost to Charlie Pieper when I had mana problems in games 1 and 3. Halimar Depths hurt me here when he Tectonic Edged it in both of those games. Maybe I should have kept more land on top with Depths or Ponder, since mana is very important in the counter war. It’s hard to say, because you can also lose by keeping to much land on topâ€”maybe the coin just came up heads and I lost this one.

I did win the last round to end up in 13th place and get six packs. Probably not worth it, since the air conditioning wasn’t the best with 160 people in the store; the place was a sauna for many of the rounds, even though the staff did the best they could and got a lot of fans to help with the heat.

I’m not sure what I want to do with the deck or if I want to play it again. There is so much hate for it and it varies so much. Valakut can play Act of Aggression, Memoricide, Combust, Nature’s Claim, and Dismember against you…so you want Dispel, Mutagenic Growth, and more hard counters. But if they don’t have Combust then the Growth is worthless, and you’re diluting your deck.

Caw-Blade is more of the same. They could have Spellskite, Into the Roil, Dismember, Celestial Purge, Mana Leak, Spell Pierce, Flashfreeze, and I guess Torpor Orb. So you have to leave Into the Roil in against them, but if they go to the all-spell attack like Charlie did against me, then you end up with a wasted card. To be fair, if I’d had more mana, I would have been able to cycle it and it wouldn’t have been such a wasted draw.

I kind of like the thought of adding Sphinx of Jwar Isle for the Caw-Blade matchup, since it’s a big flier that they can’t kill. Still, a six-drop threat in a deck with twenty-three lands just doesn’t excite me.

Until then, throw boredom overboard and find a tournament or casual event to play on www.mtgfinder.com.