This kind of deck is obviously right up my alley. Elvish Mystic ramping into Domri and Dragons– what’s not to love? It’s quite possible that I’ve played more mana creatures in my lifetime than anyone else alive. Interestingly enough, I’d actually just started messing around with a version of G/R in the few days leading up to the SCG Invitational in Las Vegas at the end of last year and was having a lot of success with it, but I ended up choosing to play B/G Midrange instead simply because I had more experience with the deck and didn’t want to audible that soon before the tournament. Brian Braun-Duin’s list has all of the elements that had me flirting with the idea of playing Domri in Standard again.

I think Domri himself is substantially weaker than he was in the old Standard format. Back then a Domri that hit the table against control was extremely difficult for them to remove. However, nowadays Domri is much more vulnerable in play due to the prevalence of Detention Sphere and Hero’s Downfall. You can’t rely on ramping him up to ultimate in the same way so he’s not the superstar he once was, but he still offers card advantage and other crucial tools.

One of the things that Domri still does very well is offer reactive capabilities from a fundamentally proactive card. Being able to deal with key threats without cluttering your draws with removal spells is crucial for a deck that wants to be able to pressure control decks while still being able to handle troublesome threats on the opposing side of the table.

Back when I was playing G/R at Worlds, the biggest of those threats was Olivia Voldaren. If you let Olivia stay on the table for more than a turn or two, she would get out of control, and you were pretty much done for. Sound like any card in Standard today?

One of the things that I really like about this deck is that it has a lot of potential answers to creatures like Pack Rat without playing a ton of purely reactive cards. Domri’s fight ability may require another creature in play to battle the Rat and this deck doesn’t have a ton of cheap threats, but it can be totally worth sacrificing an Elvish Mystic in a pinch to stop the infestation. Outside of Domri, though, you still have Mizzium Mortars and Flesh // Blood, each of which can also take out a Rat but isn’t limited to the role of spot removal. 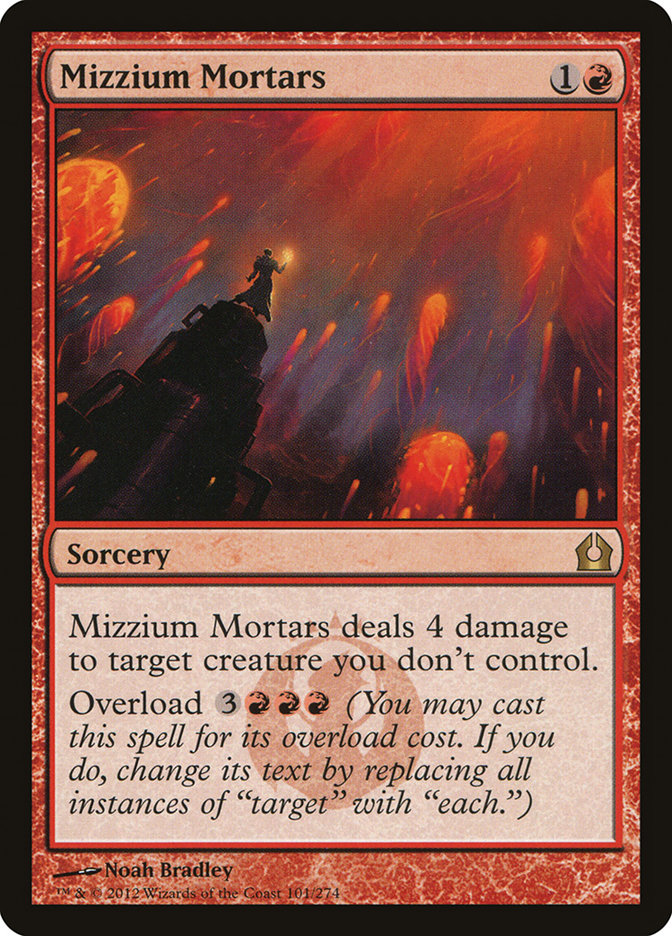 Mizzium Mortars has been a go-to removal spell for me in decks like this for a while. Killing most creatures for two mana is solid on its own, and in a field full of decks playing heavily to the board to boost their devotion, the ability to overload it to wipe the opposing side clean can be an absolute game winner. Mortars is particularly potent in this kind of deck because it has the mana acceleration to ramp to the overload relatively quickly. Even if it can’t actually kill Master of Waves itself thanks to protection from black, getting everything else off the table is good enough.

The card I’m somewhat less sold on is Flesh // Blood. I understand its allure, especially in combination with Ghor-Clan Rampager to do a lot of damage in a big chunk. I like the fact that it can be removal or a big burn spell to the face in a pinch. That sort of flexibility is especially important in a deck with a lot of mana creatures. A deck that devotes as many slots as this one does to mana—23 lands, four Elves, and three Caryatids means a full 50% of the deck produces mana—can’t afford to play a lot of purely reactive cards because you can end up with a lot of draws that just don’t do anything.

That said, there are a lot of draws in which Flesh // Blood doesn’t really do anything. If your opponent Thoughtseizes or kills your only real threat in a mana-heavy draw, it’s just going to sit rotting in your hand. And while it can act as cheap removal when you have a board presence, there are a lot of situations where it just doesn’t cut it. Unless you played an Elvish Mystic on turn 1, you can’t use it to kill a turn 2 Pack Rat on the draw, and you need to have played either a Mystic or Scavenging Ooze to even use it as removal on the play.

One of the big weaknesses of a deck like this in current Standard is its vulnerability to the one-two punch of Thoughtseize and Lifebane Zombie. With so much of the deck devoted to mana production, you only have so many threats, and if your opponent strips them from your hand, you can be left with a whole lot of nothing. This is a big part of the reason that your best cards are your planeswalkers. While Mono-Black Devotion has the tools to pressure them with damage, several of the planeswalkers you have access to can naturally defend themselves from the specific tools that Mono-Black Devotion uses to do so.

To go back in time again briefly, one card that I regretted not including in my G/R Aggro deck in Amsterdam was Chandra, Pyromaster. M14 had only recently been released, and the new planeswalker hadn’t yet seen any play. I had included Gruul War Chant in my sideboard as a tool to weaken opposing Lifebane Zombies and Thragtusks against me, and it wasn’t until after the tournament that Mark Rosewater asked me what I thought about the new Chandra that the light bulb went on in my head. Chandra did everything I wanted from Gruul War Chant and more.

One of the important things to keep in mind when you’re playing G/R against Mono-Black Devotion is that you’re the aggressive deck. If the games go on too long, your opponent is likely to be able to gain control, so you’re looking to apply pressure and punish them for using their life total as a resource. That said, you also have to defend yourself from cards like Lifebane Zombie.

That makes Chandra absolutely perfect. Not only can she push damage past Desecration Demons that might stand in the way as blockers, but she can also kill Lifebane Zombie to keep it from pressuring your life total or her loyalty. Similarly, Xenagos is fantastic because not only does he provide a steady stream of creatures with which to pummel your opponent but he can also defend himself from Desecration Demon by producing food for it every turn.

If I were to play G/R in a tournament this weekend, it would probably look something like this:

This version loses a bit of the explosive kill potential from Flesh // Blood but gains more consistent removal with an additional copy of Mizzium Mortars in the maindeck. Chandra gives you some additional planeswalker power to lean on in game 1, which can help force through damage or provide card advantage depending on the situation. Chandra is a bit less powerful in game 1 than after sideboarding against Mono-Black Devotion since they don’t have Lifebane Zombie to kill with it, but she’s still a great tool to get damage in that they have to answer.

Moving Chandra and a copy of Mizzium Mortars to the maindeck frees up some sideboard room, and I think the best use for it is additional copies of Shock. Shock is an incredibly efficient removal spell against any of the aggressive decks, from the various white-based aggro decks to R/W and Mono-Blue Devotion to the G/W Aggro deck that has sprung up with which Andrew Shrout made the finals of the Standard Open in Indy.

One of the problems this kind of deck can face against aggressive decks is its inability to catch up if it’s behind because so many of its spells are so expensive. Shock can allow you to snipe your opponent’s early plays so they can’t get ahead of you before you can get a giant monster on the board and can also kill key creatures that might otherwise give you a lot of trouble, such as Tidebinder Mage and Banisher Priest, all for the low, low price of one mana. When your deck is packed with powerful cards, sometimes all you need is the breathing room to let you play them, and Shock is the perfect card for the job.

While I haven’t really played much Standard so far this year, with Grand Prix Vancouver coming up at the end of the month I’m going to get started testing soon, and this is certainly on my short list of decks to start with. I’m leaving Sunday for the Magic Cruise, which happens to feature a Standard tournament on the boat. There I’m going to play the B/G Midrange deck that I piloted at the Invitational in Vegas. If the metagame shifts in such a way that decks like G/R start becoming popular, this is definitely something I recommend taking a look at because I have pretty much never lost to another midrange creature deck with this thing:

I talked about the deck at length in a recent article, so I don’t want to delve too much into the specific decisions here, but I definitely still think the deck has the potential to be a strong contender. G/R is the kind of deck I’d lean toward more naturally because it’s more inherently proactive (and after all, that’s the number one rule), but there’s a lot to be said for the power of Thoughtseize.

Anyway, I’m not sure yet if I’ll be writing next week (since I’ll be on a boat), but for the time being it’s good to see green decks in the spotlight again. After a long drought of performances for Elvish Mystic and friends, last weekend’s Standard Open saw three of the Top 4 finishers with Forests in their deck, even if the eventual champion did have Swamps and the dreaded Lifebane Zombie. Hopefully this trend will continue—or maybe I hope it won’t so people won’t be preparing for green decks by the time Grand Prix Vancouver rolls around and I’m inevitably playing one!