For those who don’t like looking at pretty graphs, here is the breakdown of the last nine PTQ’s including foreign ones (not including ones that just happened this past weekend). 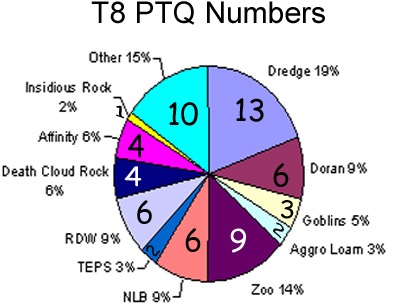 Combined with the data from the last article:

Remember that the winners aren’t necessarily the same decks that would’ve won had certain finals been played out. For example, Death Cloud Rock looks decent with four Top 8 appearances, but take into account that had the finals been played out, it would have likely won and taken an appearance away from Next Level Blue. NLB looks far more impressive than Dredge or Doran based on per-play numbers in the actual Top 8 as a result. Simply put, keep the numbers here in context.

Here we have a modified Doran / Rock deck with the Red Deck’s worst enemy, the Draco / Explosion combo, in the maindeck. The deck’s numbers certainly are all over the place, and I would definitely recommend tightening them up along the way, but Insidious Dreams itself is rather useful in an attrition war, turning dead lands or mid-game discard into a series of useful topdecks or the game-ending burn spell. Although I dislike the anti-Dredge hate package as being a little soft*, it worked well enough. The deck’s answer to the various Death Cloud decks is best summed up as, “make them discard it or sixteen them,” and it’s at least one more answer than your average Doran deck will have.

* Personally, I find quad Extirpate and two or three of any other graveyard hate card gets the job done against 90% of Dredge builds.

The only thing I really dislike about this build is the manabase. It truly shows how random Magic can actually be in dishing out proper mana hands, and how much matches shape tournaments regardless of skill level. I said earlier that Dreams into Draco / Explosion was the best weapon against RDW and Zoo decks… this is assuming you hit the mana necessary to cast the combo in the first place. Instead we have 22 lands total and a split of three Birds of Paradise and three Sakura-Tribe Elder. Que? If you didn’t like Birds because they get all charred and toasty, then run the full set of STE. Otherwise what’s the issue with running a 4/2 split one way or the other? It isn’t like these guys are close in mana and production capabilities like Birds versus Llanowar Elves in decks involving Umezawa’s Jitte.

If I were going to make any other switches to the deck without a decent chunk of testing, it would be the addition of at least one more Treetop Village. I’d also give serious consideration to a bounceland somewhere, as another way to cheat some mana costs and keep an extra card in hand for Insidious Dreams down the line. Doran itself probably isn’t needed either, as the rest of the deck can double as a normal Rock deck, but you could also say it’s a Doran deck with the combo win if you go the other way and max out the legend.

Death Cloud has gone up in popularity immensely since the start of the season due to the influx of midrange and Blue decks. This is definitely one of the more focused builds I’ve seen since the deck started doing well. You’ve got land, discard, removal, a set of Tops, ways to find more mana, and the Planeswalkers themselves… all the bare essentials, and all in full sets unless they happen to be duplicating an effect for cards 5-6, like Rampant Growth and Duress.

Remember, the Blue matches are effectively byes for your deck as you can use your discard to disrupt their early game by robbing Tarmogoyf and the other real Counterspell in the deck from their hands. Eventually Planeswalkers or Death Cloud comes online, and the game is over rather quickly. Post-board you can ask “where yo curleh mustache at?” and bring in Haunting Echoes just to start removing their entire deck from the game after ten turns of pretending you came to the tournament to actually play a game.

After that we have Ravenous Baloth, Duplicant, Smother, Deed, Death Cloud, and Damnation (post-board) to deal with the unwashed aggro masses who all forgot they could easily be blown out by six mana cards despite running burn. I mean really, who kills all the creatures in play and makes you discard your hand and then destroys all your land to boot? Certainly it’s possible to race with these sorts of decks to negate Death Cloud as an option, but it becomes unlikely if the Cloud player has kept any sort of defensive draw.

On the other hand, game 1 against Dredge is about as big an auto-loss as you can get, while the post-board games don’t get much better with this sideboard. Still, that’s easily correctable if you see a lot of Dredge in your metagame, otherwise 4 Leyline, STE and a few other removal spells should get you there against most Dredge players who seize up whenever they have to actually think during a game.

As for newer innovations, the Protean Hulk deck is probably the most exciting. However, you could also take advantage of Bitterblossom and Mutavault and relive an old classic from the Legacy and Vintage formats. The Big Mana decks have receded, making a slower controlling deck feasible again. However, Tog decks have the flaw of requiring a large hand, and the need to keep a creature alive to win the game. Instead, with Landstill we can focus on surviving and translating cheaper card draw and win conditions into an overwhelming board state.

Mind you, this is a bit of an unrefined list as I’ve been focusing elsewhere. I simply like the concept, so I bring it up for you readers to develop further.

The concept is simple: stall until you feel comfortable beating the heck out of your opponent with lands and Faeries. Resolving a Bitterblossom early is basically game over against Blue decks, and can be a major detriment to Doran decks attempting to swing with large non-trampling men while you build up land to Damnation the board away. Corrupt is a nice forgotten end-game finisher that also provides you with fuel for Bitterblossom if you dropped it turn 2 and absorbed a lot of life-loss. Cabal Therapy takes over the traditional secondary protection slot because it’s now easy to get a creature to sacrifice to it, and even â€˜blind’ you can go after what you need without much of a loss. Obviously the deck needs to be refined, but the idea of running so much removal and a solid draw engine to get into the late-game, while efficiently turning lands and life into board control elements, seems quite effective.

Before we leave off for the week, Chapin mentioned the new Bubble Hulk deck in his article on Monday. For reference, the list is from Kuan-Kuan Tian* and his team On the Bubble, so I expect to see more about the deck in the near future, or see it in a PTQ Top 8 near you. As for me, I’m quite content with the deck and hope to refine it a bit more before the next set of PTQs.

* Some might recognize him as one the people who made Aussie Storm last year.

For reference, the deck is pretty good, but it needs a bit of work before it hits the “Rogue complicated combo deck that’s actually really strong” niche that Aluren and Pattern-Rector used to hold. For what it’s worth, I like Cunning Wish and the tutor I’ve been pimping all season in my version of the deck, but then again that could be because I love having a secondary combo in everything I play.

Best of luck to everyone this weekend, and see you next week!